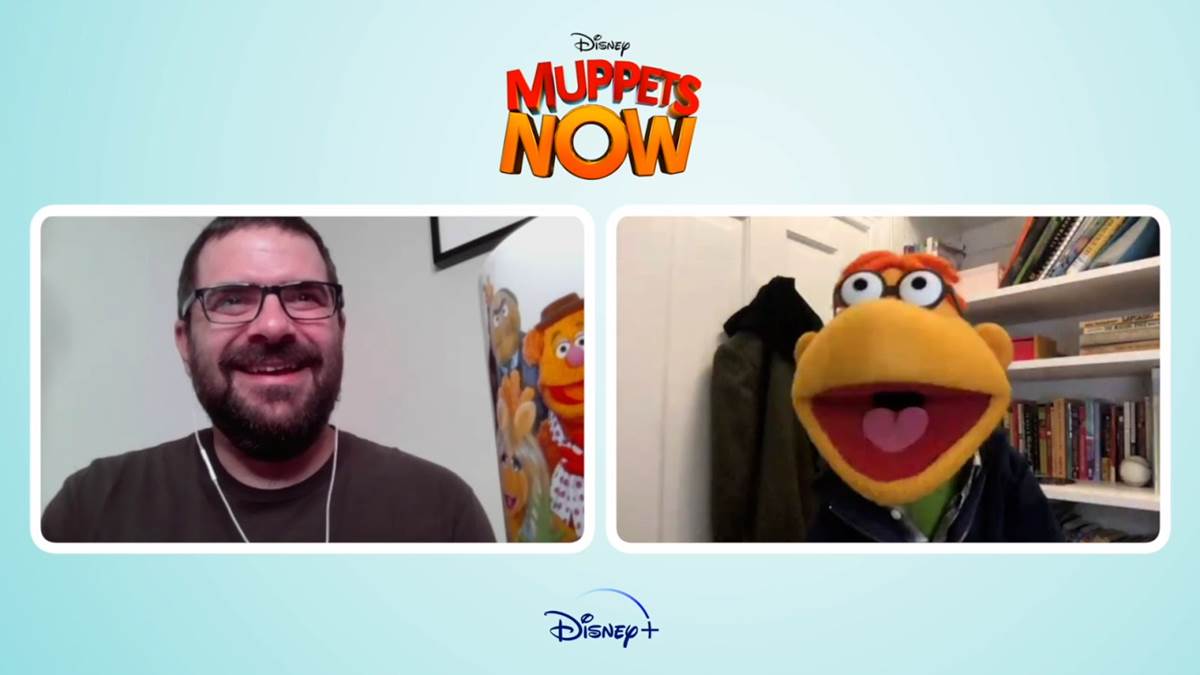 It’s not often a lifelong dream comes true, but once in a blue moon you get extremely lucky and have the opportunity to talk with a Muppet. That happened to me this past week, as the powers that be were kind enough to extend an invitation for Laughing Place to interview the one and only Scooter about the highly anticipated new series Muppets Now, which premieres next week.

Beyond Muppets Now, I spoke with Scooter about the beginnings of his career as a gofer on The Muppet Show, what he thinks of the Swedish Chef’s cooking, and whether he’s okay with Pepe the King Prawn calling him “Scooper.” Enjoy the video interview below, continue scrolling down to read the transcript, and check out Muppets Now when it begins Friday, July 31 on Disney+.

Mike Celestino, Laughing Place: Hi, Scooter! It’s so nice to talk to you.

LP: I’ve been a fan for my entire life. I want to ask you– you started out as a gofer on The Muppet Show, and now here we are 45 years later and your job on Muppets Now is to upload the files for the show. So I guess my question for you is do you feel that there’s a lot of upward mobility in the Muppets organization?

Scooter: Uh, I think so, yeah. I started out as a gofer; you’re right– gofer coffee, gofer donuts. And I’ve sort of worked my way up. But basically no one else wanted this gig, so they kind of stuck me with it. But, you know, it is an upward move. So hopefully I can keep rising.

LP: Tell me about Muppets Now. What’s the premise of this show compared to previous stuff that you guys have done?

Scooter: Well, this is our first unscripted series, so we’re very excited about that and everyone got to come up with their own segment ideas. Pepe came up with a game show– it’s called “Pepe’s Unbelievable Game Show,” and it is unbelievable, let’s just say. The Swedish Chef has his cooking segment called “Ookey Dookey Cooking” and “Muppet Labs Field Test” is Bunsen and Beaker doing experiments out in the world, so everyone got to kind of do what they love to do. And I’m the guy who’s in charge of assembling the episodes and getting them uploaded to Disney+.

LP: That’s awesome. And of course, as with many Muppet productions, you’ve got celebrity guests on Muppets Now. Tell me about some of those.

Scooter: Oh boy, we had Taye Diggs, we had Linda Cardellini, RuPaul, who’s fantastic… Danny Trejo got to cook with the Swedish Chef, Seth Rogen [did a] hilarious interview with Fozzie Bear. Lots of good celebs came by.

LP: So, technology has advanced quite a bit since the Muppets first came on the scene. Tell me about how you’re using modern methods of communication for Muppets Now. I know you’ve got some Zoom chats going in the show.

Scooter: Yeah, I think when we assemble the show now, we’re all in different areas, and we’re able to take a look at different rough cuts and get notes over the internet. The notes just keep coming. The notes never end, especially from a certain, uh… [looks around to make sure the coast is clear] pig, who never seems to be satisfied with the edits. So that’s a bit challenging at times. But also what’s great is that this is our first streaming show, so you can watch Muppets Now whenever you want. That’s why it’s called Muppets Now. That’s kind of exciting for us.

LP: That’s fantastic. So, sometimes it feels to me like you, Scooter, are the only Muppet doing actual work to put together all this entertainment for us fans. And you mentioned Piggy being a little bit of a diva, but do you feel like Kermit and the rest of the gang appreciate your contributions behind the scenes?

Scooter: Well Kermit for sure does. The other guys– uh… I’m not so sure. You know, Kermit’s the best. Kermit is the glue that holds The Muppets together.

LP: I’ve seen a few episodes now, and I noticed that Pepe calls you “Scooper” in the game show segments. Are you okay with that?

Scooter: You know, no matter how many times I say “Scoo-ter,” he just can’t get it right. He knows my name is Scooter, he just does it to push my buttons.

LP: I’m sure he does. How about the Swedish Chef? I really enjoy his segments. I think he’s really funny, but I’m curious if you’ve tried any of his food, and if so what you thought.

LP: Fair enough. And finally, you mentioned that Muppets Now is the first unscripted Muppets series, which implies to me that the previous shows have been meticulously planned out. Does that sound right to you?

Scooter: [shakes head] No. I mean, they’ve been loosely scripted… possibly. But there’s always a certain amount of improvisation that goes along with what we do.

LP: Thank you so much, Scooter. It was so nice chatting with you and meeting you today.