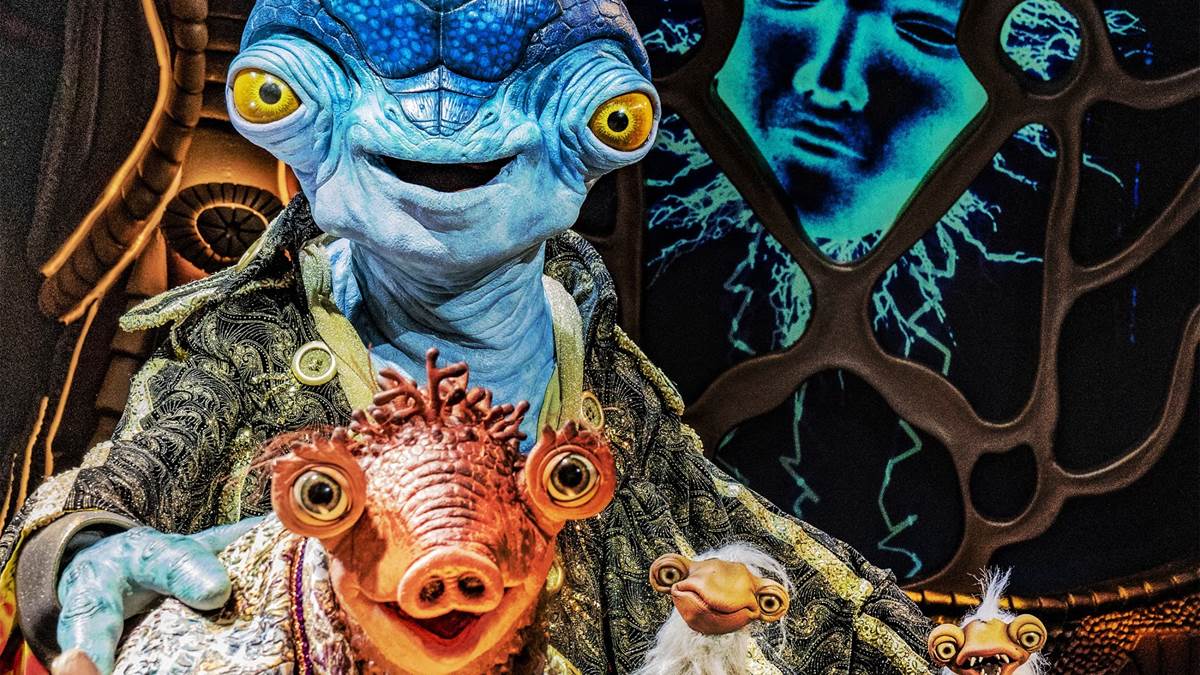 It may sound strange to say it, but the idea of an alien-puppet-hosted talk show isn’t a wholly original one. Over the course of seven glorious episodes on TV Land in 2004, the ill-fated ALF’s Hit Talk Show brought the 80s sitcom star back into public view as he held court with celebrities like Bryan Cranston and Doris Roberts. More recently, The Not-Too-Late Show with Elmo has amused HBO Max audiences with interviews and games featuring the lovable red Sesame Street Muppet. Obviously Elmo is a monster, not an alien, but the point stands– the concept is getting to be well-trod ground at this point.

Enter the new Disney+ series Earth to Ned from The Jim Henson Company, which puts a somewhat interest spin on the premise– this time the alien puppet host (voiced by Paul Rugg of Animaniacs and Freakazoid fame) and his sidekick Cornelius (puppeteer Michael Oosterom) beam up unsuspecting celebs from their daily lives for brief discussions about whatever Earthly topic Ned happens to be fascinated by at the time. Fortunately the abductees never seem too bothered by the inconvenience and tend to be happy to play along. I watched five episodes of Earth to Ned for the purposes of this review and found them all to be pretty entertaining. Each installment includes a cold open, two celebrity interviews, some sort of sketch or remote segment in-between, and a closing segment in which Ned reports to his estranged space admiral father (via direct address into the camera) about the progress of his alien species’ ever-further-postponed invasion of our planet. Most of the show takes place on Ned’s spaceship– which is buried underground for reasons that haven’t yet been explained in the episode I’ve seen– although Cornelius is occasionally beamed to the surface to learn more about human customs and culture (think Uncle Traveling Matt from Fraggle Rock, though somehow even more endearingly clueless). The proceedings are also watched over by the ship’s stern AI system B.E.T.I. (Colleen Smith of The Curious Creations of Christine McConnell) and the talk show set is infested by Critters-like creatures called CLODs (Cloned Living Organisms of Destruction) who pop up to perform musical numbers, skits, or simply serve as an amusing distraction during the interview segments. Those sections, by the way, are entirely dependent on the guest’s willingness to go with the flow and have fun with Ned and his extra-terrestrial cohorts. It’s no wonder they chose to open the first episode with Conan mainstay Andy Richter (who of course gives Cornelius tips on being a sidekick), but other strong appearances include Reggie Watts of Comedy Bang! Bang!, Kristen Schaal of Gravity Falls, and Taye Diggs of Disney+’s other big-name puppet show Muppets Now. 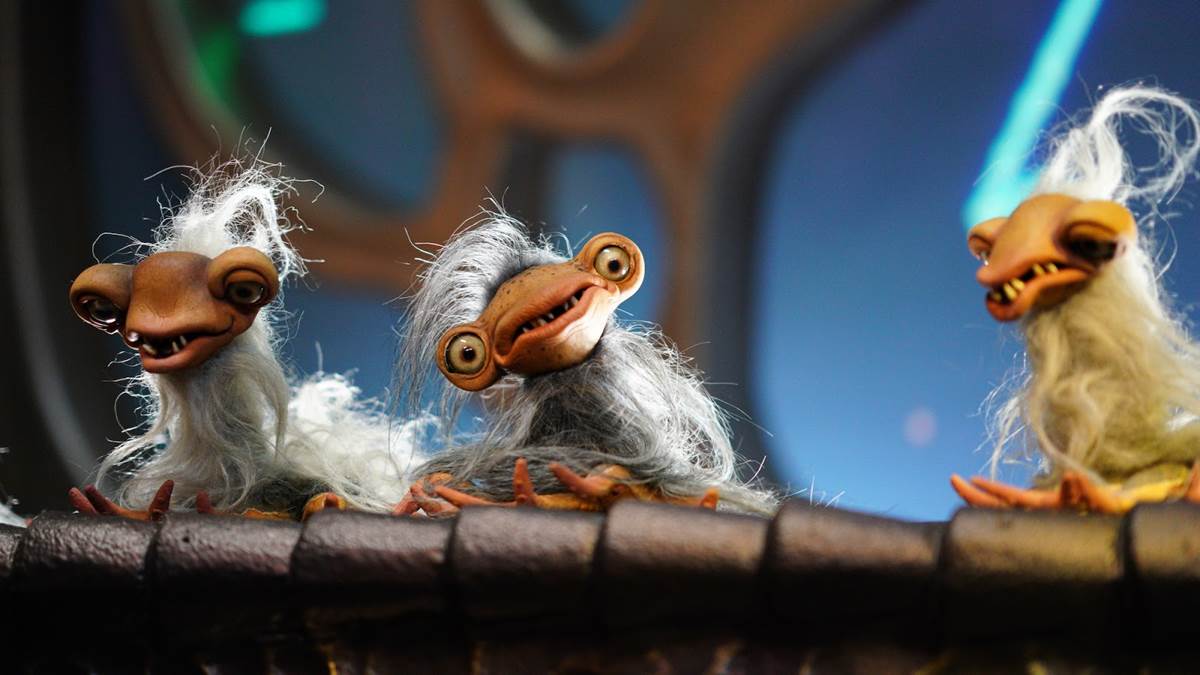 Speaking of intra-platform synergy, a Star Wars-themed episode welcomes the surprisingly game Lando Calrissian actor Billy Dee Williams and a cameo appearance by spherical droid BB-8, and Cornelius pays a visit to two stars of High School Musical: The Musical: The Series during one of his planetside sojourns. There’s also a horror-themed episode and a musical episode that sees Crazy Ex-Girlfriend’s Rachel Bloom sing a delightfully hilarious song about how she hates interview questions about on-set pranks. But the absolute best thing about Earth to Ned is unsurprisingly the craft that went into creating its colorful creatures and the undeniable talent of the performers bringing them to life. Ned himself is an enormous four-armed being whose convincingly fluid movements recall the audio-animatronic Shaman character in Disney’s Animal Kingdom’s Na’vi River Journey attraction. 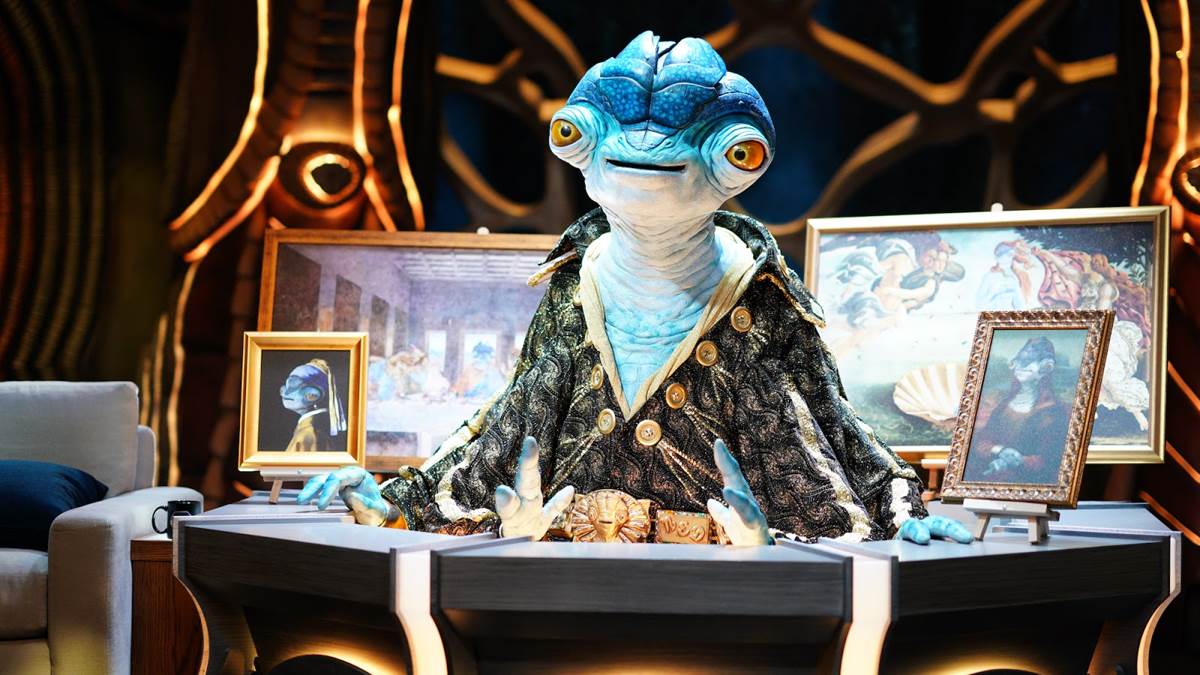 The biggest compliment I can give to Earth to Ned is that it feels like something Jim Henson would have created had he survived to see the streaming era– a fun and slightly edgy (though thoroughly family-friendly) take on the contemporary talk-show format, replacing the Jimmy Fallons of the industry with a similarly naive-but-likeably-good-natured visitor from another world. For that reason and because there’s more than enough charm here to call the series a success, I’m looking forward to watching more episodes as they become available. And hopefully the show will run long enough for ALF to swing by.

Earth to Ned premieres this Friday, September 4 exclusively on Disney+.