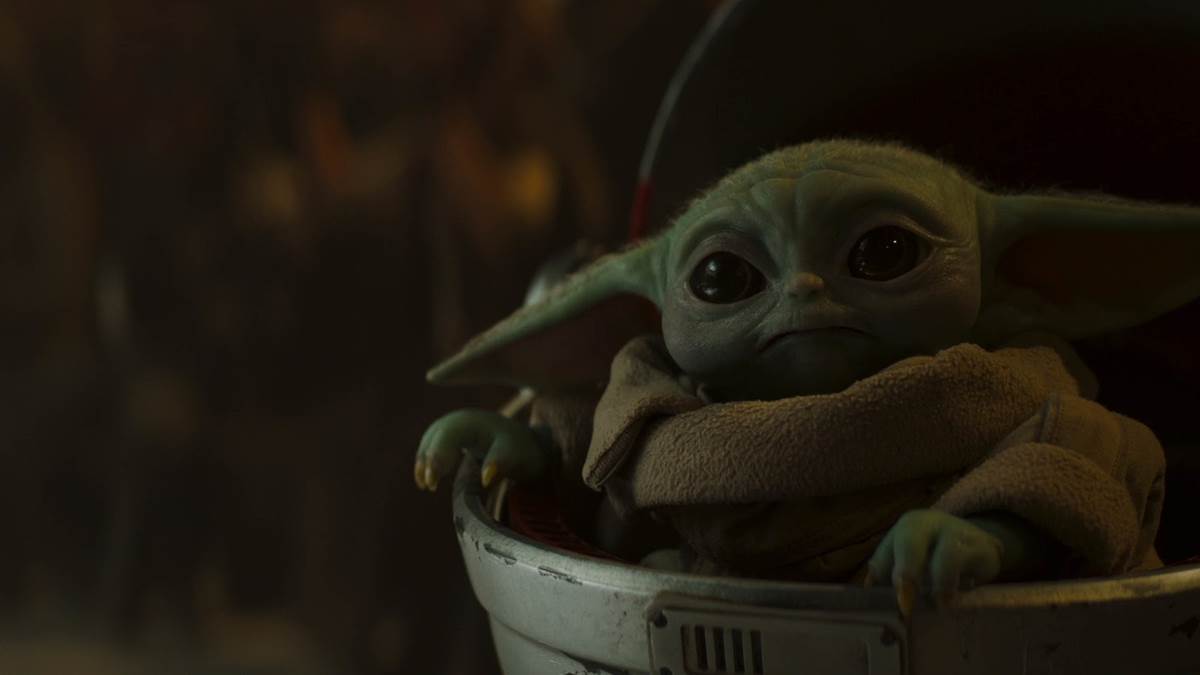 Surprise, surprise. About two and a half weeks after it would have likely debuted during Star Wars Celebration (had this year gone as planned), the official Star Wars YouTube channel dropped the trailer for the second season of The Mandalorian early this morning.

Below I’ve taken screen captures of each shot from the new trailer and done my best to analyze what we’re being shown, based on the information currently available.

SHOT 1: The camera coasts over the surface of an arid-looking planet or moon, as another more verdant planet appears on the horizon.

SHOT 1A: The Razor Crest (bounty hunter Din Djarin’s ship AKA the series’ title character) limps into view, and it has definitely seen better days. The ship appears as though it has been attacked and/or mercilessly disabled in a space battle. One of its engines flickers on and off as sparks fly and the rear cargo bay door hangs limply open. The ship slowly drifts its way toward the distant planet.

SHOT 2: The Lucasfilm logo. We start to hear alien-sounding music.

SHOT 3: In silhouette against a planetside backdrop at dusk with several spires or towers jutting up among the lights of settlements in the background, the Mandalorian (Pedro Pascal) walks toward the camera determinedly, with the Child in his floating pram beside the bounty hunter.

“Show me the one whose safety deemed such destruction.” In voice-over, we hear the words of the Armorer (Emily Swallow) from the first season finale episode entitled “Redemption.”

SHOT 4: The traveling pair enter into what looks to be a dingy underworld city. There’s graffiti on the walls and a lone figure looms in a corner. More tower-like buildings surround the dusty path, and a few street lights barely illuminate the way for our heroes.

“You must reunite it with its own kind.”

SHOT 5: A Tusken Raider riding on a Bantha watches the Razor Crest fly over the rocky desert surface of what is likely Tatooine (as Tuskens are native to that planet, and Djarin has visited there before).

Mando: “Where?” Armorer: “This you must determine.”

SHOT 6: Now the Razor Crest hurtles toward a craggy ravine on a snow-covered planet, making for a jarring juxtaposition with the previous shot.

SHOT 7: The Child stands ankle-deep in the snow, looking somewhat forlorn, as Mando steps into frame next to him.

“The songs of eons past tell of battles between Mandalore the Great and an order of sorcerers called Jedi.”

SHOT 8: Djarin kneels down next to the Child. We can now more clearly make out the background, which contains a rocky mountainside and a derelict ship of some kind.

SHOT 9: Now this is exciting. Mando makes his way through a bustling dockside seaport on what we can probably assume is the aquatic planet Mon Cala, homeworld to the Mon Calamari and Quarren (as you can see a number of both species working the docks). There are also a few scattered humans and two other aliens of a different race. Plus, our protagonist is wearing his jetpack! Exciting.

SHOT 10: A cloaked figure watches from among a stack of crates on the docks as passersby cross in front of the camera. This is the character played by professional wrestler Sasha Banks, and who exactly that character is has been the subject of much speculation in the fan community– the leading theory being that Banks may be portraying Sabine Wren from the animated series Star Wars Rebels. Obviously this has not been confirmed.

SHOT 11: Here Mando appears to be scanning the docks for the cloaked figure, though the background is hazy and out of focus so it’s impossible to determine where exactly this shot takes place.

“You expect me to search the galaxy and deliver this creature to a race of enemy sorcerers?”

SHOT 12: This is likely Mando’s point-of-view as he searches the docks. As more aliens pass by the cloaked figure, she disappears.

SHOT 13: The Child is as surprised as we are. He looks up to Mando for guidance.

SHOT 13A: The camera pans up to Mando’s helmet as he looks down at the Child, sharing in his confusion.

The Armorer: “This is the way.”

SHOT 15: A boat! We don’t see a tremendous amount of boats in Star Wars, so that’s cool. I’m going to assume this is still on Mon Cala. This boat is making it way through open waters, leaving a wake behind it.

SHOT 16: We see that Djarin and the Child are passengers on some sort of cargo ship. There are barrels scattered around the deck and we see two Quarren working with ropes and moving crates.

SHOT 17: Still in his hovering pram, the Child looks up at Mando again. Mostly this trailer is filled with a lot of pregnant pauses.

SHOT 18: The Razor Crest (notably in much better shape here) is flying through space, either being escorted or surrounded by two New Republic X-Wing starfighters.

SHOT 19: Mando watches from the Razor Crest’s cockpit as the X-Wing to his left opens its S-foil wings into attack position.

SHOT 20: Now the Razor Crest races through clouds in-atmosphere, apparently being pursued by the two X-Wings. Or is it leading an attack?

SHOT 21: The Mandalorian (jetpack on) rides away from the camera on a speeder bike or swoop through what is again probably the Tatooine desert, with mountains surrounding him.

SHOT 22: Cara Dune (Gina Carano) and Greef Carga (Carl Weathers) walk toward the camera, happy to see whoever they are greeting (likely Mando). We are back on Nevarro, the planet featured most heavily in the first season. These two characters’ costumes appear shiny and new, as the marketplace bustles behind them.

SHOT 23: Four Outland TIE Fighters begin to take off after being parked on the surface of an unknown planet, though it could be Nevarro again. There are crates stacked around the airfield and what appear to be antennae or moisture vaporators dotting the landscape, with mountains in the distant background.

SHOT 24: Three stormtroopers hustle through an Imperial corridor as a klaxon blares and the camera follows behind them. This shot looks like something out of the original Star Wars trilogy, which is great.

SHOT 25: Three Imperial Scout Troopers on speeder bikes zoom off a platform into a rocky canyon below. This looks dangerous!

SHOT 26: One of the speeder bikes lands on the canyon floor, Scout Trooper still mounted safely aboard. He skids and turns the bike toward the camera.

We hear an unknown character say “You know this is no place for a child.” This sounds like The Mandalorian creator and showrunner Jon Favreau’s voice. Favreau has already played several characters across the Star Wars canon, but this is a new one.

SHOT 27: Mando emerges from water and grabs a grating above him.

SHOT 28: Mando jumps off a similar-looking canyon edge and ignites his jetpack.

SHOT 29: From underneath, we see the Mandalorian rocket over the canyon using his jetpack.

SHOT 30: Back in the underworld city, Mando shoots one of the street lights, which happens to have a person hanging upside-down from it by his or her feet. Sparks erupt in the dark as the light goes out. Did Mando put this person there or is he rescuing them?

SHOT 31: Back on the snowy planet, we watch from behind as Mando is carrying something into an ice cave. This reminds me an awful lot of the kyber-crystal-rich planet of Ilum from the Star Wars: The Clone Wars animated series and the Star Wars: Jedi – Fallen Order video game. Ilum is also notably the planet that became the First Order’s Starkiller Base in Star Wars: The Force Awakens, so it would be pretty interesting to see it show up in The Mandalorian.

SHOT 32: In a closer shot from the side, we see what Mando is carrying through the ice cave: the Child.

We hear Mando say, “Wherever I go, he goes.”

SHOT 33: The Razor Crest is engulfed in flame as it falls through the atmosphere of an unknown planet. It seems like this ship will see a lot of action (and damage) this season.

SHOT 34: A much wider shot of the Razor Crest falling through the cloudy atmosphere, still on fire.

SHOT 35: From behind, we follow Mando as he enters into some sort of intimate gladiatorial arena crowded with patrons. In the central ring we see two Gamorreans battling each other. Above them hangs a series of different-colored flags.

SHOT 36: A closer shot of the Gamorreans fighting in the ring with vibro-axes and a better look at the flags above them.

SHOT 37: Djarin is watching the match with a member of the one-eyed Abyssin species (first seen in Mos Eisley Cantina in the original Star Wars film).

SHOT 38: Behind Djarin and the Abyssin, three human guards stand up and point their blasters at Mando’s head.

SHOT 39: The Child turns toward the action and looks worried. How are they gonna get out of this one?

SHOT 40: The Mandalorian arms his wrist-mounted Whistling Birds as The Child looks on.

SHOT 40A: In the funniest moment of the trailer, the focus shifts to the Child, who turns away from Mando and presses a button on the front of his pram, closing its lid. He knows the mayhem that’s about to come from the Whistling Birds.

SHOT 41: There’s no image, but we hear the Whistling Birds do their thing.

SHOT 42: A Zabrak gladiator threatens to punish Mando, but receives a blade in the chest instead. Other fallen enemies are seen strewn about the arena floor around our hero.

SHOT 43: The gladiator falls to the floor, dead.

SHOT 44: The camera dollies in on the Mandalorian, who then rushes off-screen.