In last month’s issue of Marvel Comics’ main Star Wars title, readers discovered the origin story of the devious Commander Ellian Zahra, a new Imperial officer introduced as a villain within these very pages this year. And now, in issue #8, entitled “The Will of Tarkin: Part II – Prey,” we get to see Zahra’s plan enacted, as Darth Vader and Emperor Palpatine contact the former protege of Grand Moff Tarkin to enlist her with the task of tracking down the remnants of the Rebel Alliance. It’s not clear where these Palpatine / Vader scenes take place in context of what has been happening in the current Star Wars: Darth Vader comic, set around the same time period, but that admittedly doesn’t really matter for the story being told here.

Zahra was relegated to “non-essential duties” after disappointing Tarkin, but never got a chance to redeem herself thanks to her mentor blowing up in the Death Star explosion. Now she’s back in control of an Imperial Star Destroyer and has cornered two divisions of the rebel fleet. Intending to follow through on her personal vendetta against Princess Leia Organa, Zahra boards the Nebulon-B frigate with a squad of stormtroopers and sets about drawing Leia into a cutthroat one-on-one confrontation. 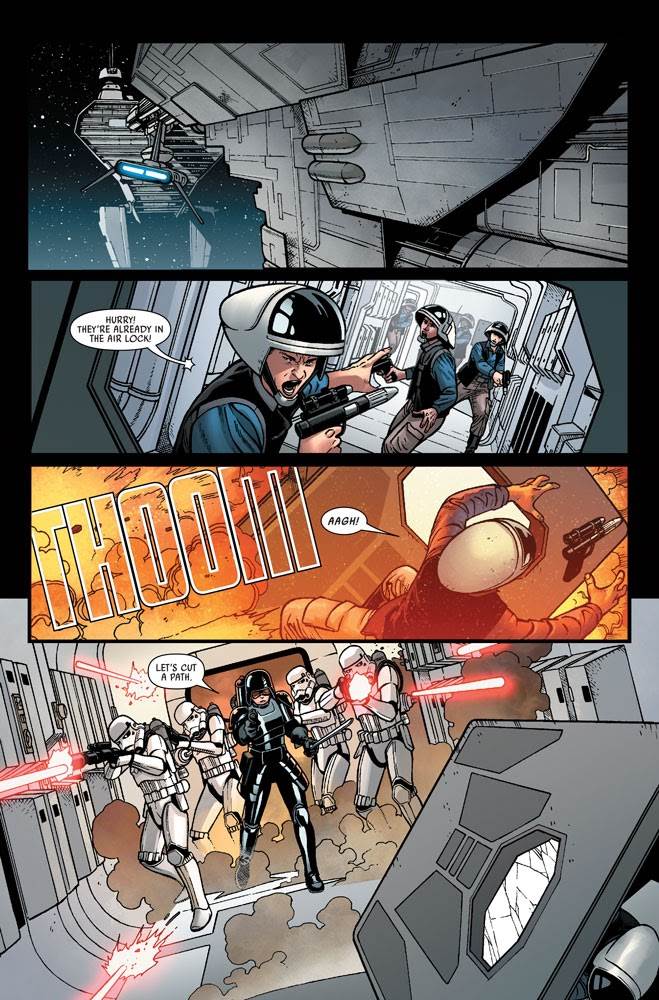 Meanwhile, Luke Skywalker (in his X-Wing) and Chewbacca (piloting the Millennium Falcon with Lando Calrissian as his copilot) battle Imperial TIE fighters, attempting to clear the space around the Mon Calamari cruiser Home One so Wedge Antilles can launch his starfighter squadron. Leia stands her ground against Zahra and her uncanny sword-fighting abilities in the frigate’s engine room until an ally surprisingly shows up to turn the tides, but Zahra feels as though the damage has already been done. Though the Alliance claims victory in the overall battle, the seed of doubt has evidently been planted in Leia’s head, which Zahra hopes will affect her abilities as both a leader and an inspirational symbol of the Rebellion. 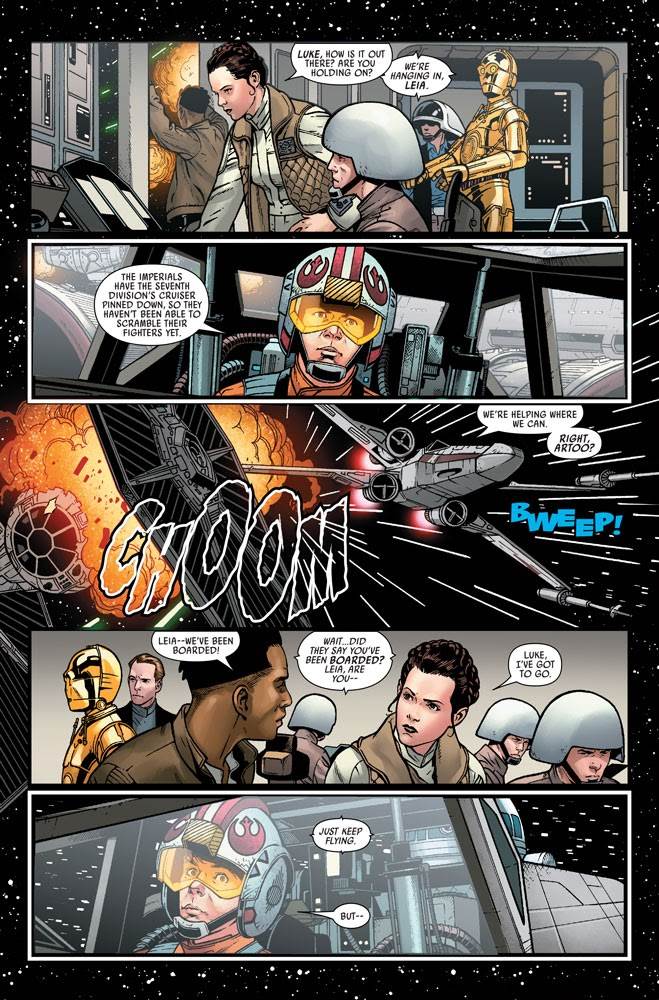 As usual, writer Charles Soule (Star Wars: The Rise of Kylo Ren) does a terrific job of plotting in this issue, continuing the shift of focus to Leia from the earlier Luke-centric arc. The action beats and dialogue all make sense and feel accurate to each character’s voice, and the ending left me excited to see further conflict between Leia and her newfound arch-nemesis. Artist Ramon Rosanas (Star Wars: Age of Resistance) is also working wonders in riding that all-too-important line between realism and stylization that helps make Star Wars work in comic book form. And according to the cover for next month’s issue– due out December 9– we’ll be getting more Leia action, along with C-3PO back in a supporting role and a guest appearance by Lobot! Who wouldn’t be excited for that? Star Wars #8 is available now wherever comic books are sold.