D23 is conjuring up magic all week long with their virtual Fantastic Worlds Celebration. On November 17th, one of the worlds explored was more of a universe. To celebrate the 80th anniversary of Captain America, two big wigs from Marvel Comics teamed up for a journey through the history of Steve Rogers. Editor in Chief CB Cebulski and Vice President/Executive Editor Tom Brevoort revealed cool facts about the character that even diehard Marvel fans might not know.

Co-created by Jack Kirby and Joe Simon, both of whom were Jewish, CB and Tom revealed that both men received death threats from American Nazi sympathizers. New York City’s Mayor Laguardia had to provide police protection to keep the two comic writers safe. They also revealed that unlike today, Joe and Jack wrote and drew the comics, sharing both responsibilities. They also revolutionized the comic industry by changing the shape of the grid and featuring action that was too explosive to be contained inside.

Captain America’s shield went through a big change from the first issue to the second. Originally holding a patriotic triangular shield, Archie Comics complained that it looked too similar to their character “The Shield” and Marvel solved the issue by making it round going forward. Bucky Barnes was along for the ride from the very beginning, originally an army mascot who caught Captain America changing, discovering his secret identity and becoming his sidekick as a result. 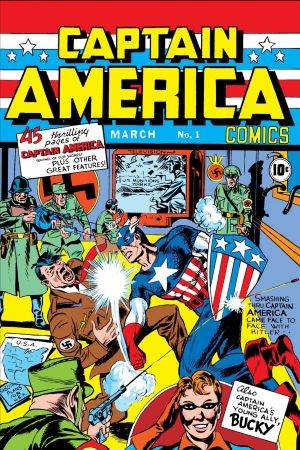 Captain America’s first big-screen adventure came in 1944 with a fifteen episode series made by Republic Pictures. Originally intended for a different character from a rival comic company, Cap’s rising popularity was irresistible for the studio. However, the script was only marginally changed and it wasn’t a faithful adaptation, with a DA named Brant Gartner taking up the mantle. But the serial did impact the future of Captain America by introducing his motorcycle to audiences.

After World War II ended, sales of Captain America began to decline. With Simon and Kirby out, returning war veteran Stan Lee became editor. One of his earliest impacts on the story of Captain America involved giving Steve Rogers a new career as a teacher at the “Lee School.” Bucky had also grown a little stale by this point and the character was shot, replaced by a female sidekick named Betty Ross. The series would continue to evolve as superhero comics declined in popularity, ultimately being canceled in 1949 after several attempts at adding horror elements to the series to draw readers back.

In 1953, the 20th Century Fox Batman television show made Atlas Comics (a rebranding of Timely Comics) think superheroes were back. Stan Lee was tasked with reviving three characters, Captain America along with the Human Torch and Submariner. During this short run, Captain America was fighting against communism, jumping from WWII to the Cold War.

1961 was a big year for comics fans, the year Marvel Comics became Marvel. Jack Kirby was back and along with Stan Lee and Steve Ditko, the trio ushered in the “Marvel Age of Comics.” Making Captain America relevant again to readers was a tough job, but Stan Lee figured it out in 1964 in Avengers #4. While looking for Submariner in the arctic, the Avengers happen upon the Steve Rogers frozen in time. The story reset Captain America’s plot in many ways, claiming he was frozen before the start of WWII and that his best friend Bucky was killed in the fight that landed him on ice. The writers assumed that readers would not be familiar with the previous stories, but it did come back in a way.

It wasn’t until 1968 when Captain America would get his own comic title, largely because for much of the 1960’s, Marvel’s distribution deal was through DC, who put a cap on the number of comics Marvel could publish. Resetting numbers wasn’t common back then, so this series started with issue 100 and found Captain America having a nuanced dilemma with America’s involvement in the Vietnam War at a time when most young readers were opposed to it. 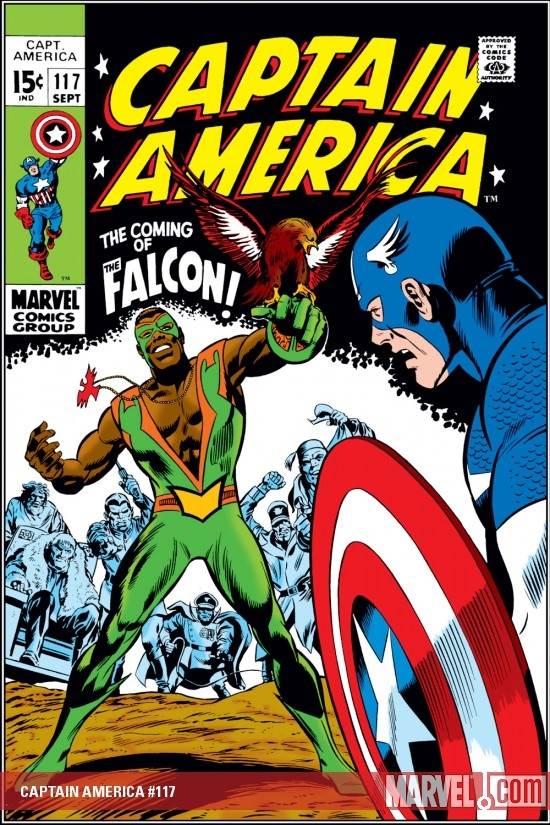 The late 1960’s also saw Marvel Comics striving for a more diversified slate of superheroes, introducing The Falcon as one of their first Black heroes. The Falcon grew so popular that Cap’s series was retitled Captain America and the Falcon.

By the 1970’s, an era of comic writers came into Marvel who grew up with Captain America and wanted to create a cohesive backstory that explained how Captain America comics continued through World War II and resurged in the 1950’s when Captain America was allegedly frozen solid. They answered it by making two Captain America’s and having the other return along with his sidekick Bucky (nevermind that he was shot and replaced by Betty Ross) to challenge and fight the original.

The writers got even more political in 1974 in the wake of the Watergate Hearings. In the comics, Captain America was framed for murder by a “Secret Empire,” leading him on a quest to find out who was behind it. The plot ended with him discovering the leader in the Oval Office and while his face was never shown, there was no other conclusion for readers to come to than to believe it was President Nixon. Following this plot, a disgraced Captain America briefly retired and Falcon fought on his own for several issues before a series of other men tried to step into the suit. After one of them named Roscoe was murdered by the Red Skull, Steve Rogers returned to avenge him.

Captain America made his TV debut, first in limited animation form in the 1960’s in The Marvel Super Heroes where some local affiliates made their own live-action introductions with actors in a Captain America suit. He then returned in two made-for-TV movies in the 1970’s that were intended to become a TV series following the success of The Incredible Hulk. Red Brown starred as Captain America, who was a motorcycle riding beach bum in this version who used his motorcycle windscreen as his shield. It wasn’t a success. 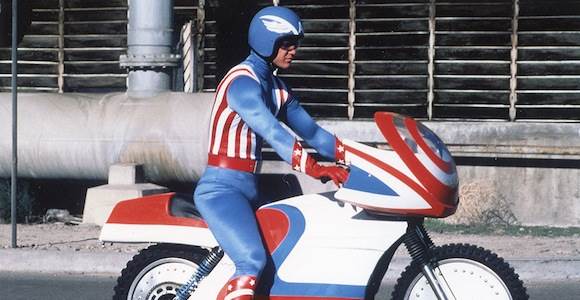 Like all things, Captain America got weird in the 1980’s, including a new identity for a brief time called CapWolf. A new writer named Mark Grinwald took over the series and among the changes, he made Bucky African American. When it was brought to his attention that the combination of skin tone and name was offensive, the character was renamed “Battlestar.”

An attempt was made to bring Captain America to the big screen in 1990 through a low budget film that ultimately ended up on TV instead. Matt Salinger played the lead role and his nemesis, Red Skull, was Italian for some reason. Later that decade, Marvel Comics would reboot the character as part of their “Heroes Reborn” initiative and Captain America #1 became the best selling title in the series since the 1940’s. This new take by Rob lIefeld and Jeff Loeb borrowed a little bit from Total Recall with Steve Rogers having no memories of his past.

The 2000s have included some of the biggest Captain America stories in the comics’ history, including finding Steve Rogers conflicted after the events of 9/11. An alternate reality series called Truth: Red, White & Black featured a character named Isaiah Bradley, an African American who was a test subject for the Super Soldier Serum before Steve Rogers and became an unacknowledged Captain America. The Winter Soldier also debuted during this era as an initiative to bring back Bucky Barnes. And the Marvel Comics crossover event, Civil War, is still regarded as one of the best in the company’s history. 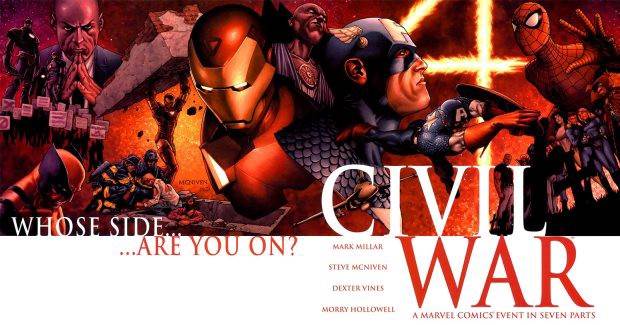 It seems that Captain America will be around for at least another 80 years, with new comics being written by Ta-Nehisi Coates and a new Falcon and the Winter Soldier that will determine who carries the shield going forward. It was fun learning all about the history of one of Marvel’s longest running superheroes. 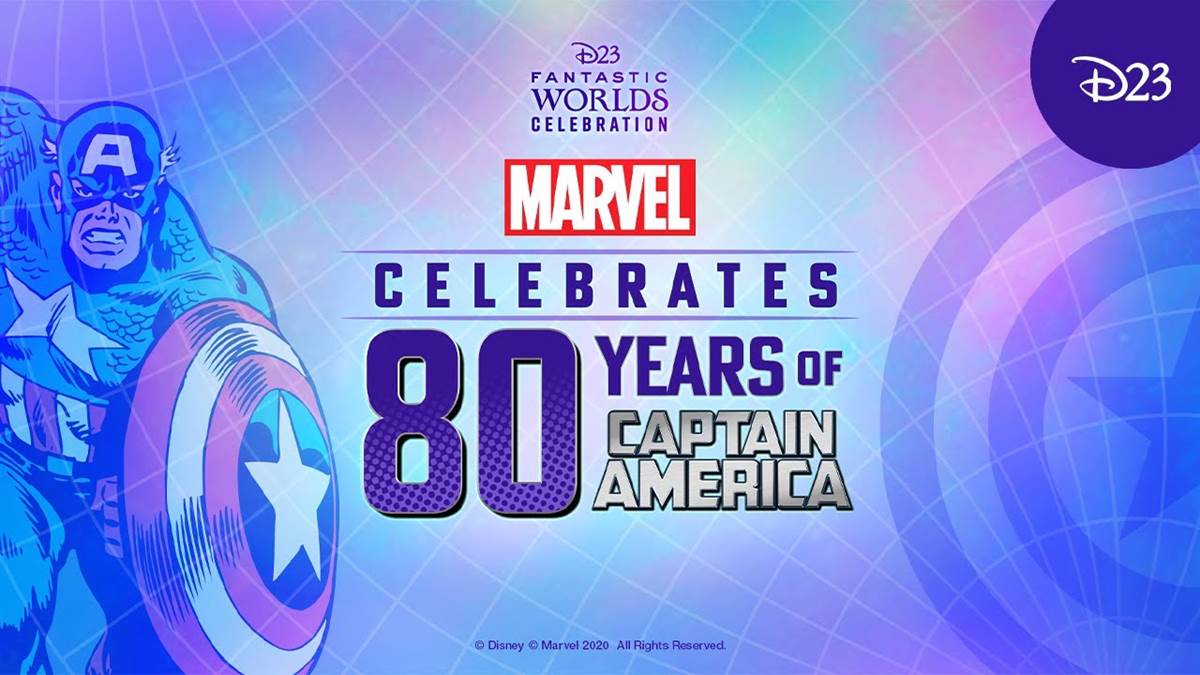 You can learn more about D23’s Fantastic Worlds Celebration at D23.com.