Had 2020 gone the way we all would have preferred, Marvel Comics’ main Star Wars title would likely be closing out the year with issue #12 of its current volume, set between the events of The Empire Strikes Back and Return of the Jedi. Instead, we skipped a few months of comics being released back in the spring and now December sees the release of #9, which represents the first chapter of a new arc for the series.

“Operation Starlight – Part I: The Ancient Relic” opens with Princess Leia rallying the troops after the Rebel Alliance’s recent victory. But hope is dwindling as the Galactic Empire has figured out a way to crack the Rebellion’s encryption codes. Taking a page out of real-world history (specifically the Navajo code-talkers of World War II), C-3PO suggests using a long-dead language called Trawak, which will require the pilfering of an ancient protocol droid from the expansive Imperial Museum on Coruscant. Naturally the curator of said museum isn’t the nicest guy in the galaxy, but Leia assembles a crack team to travel to the Imperial-controlled city-planet as a plan of attack. Yeah, it’s another heist story in a Star Wars comic, but at least the crew put together here is an interesting one: we get to see the SpecForce Pathfinders in action– Kes Dameron (Poe’s father) and a couple cool-looking aliens called Needle and Frell– alongside poor Lando Calrissian (who wishes he could be anywhere else) and his buddy Lobot, who has the tools and knowhow to hack into the museum’s computer. As you might guess, the scheme doesn’t go perfectly, but it’s fun to see what these characters are capable of in this kind of situation regardless. 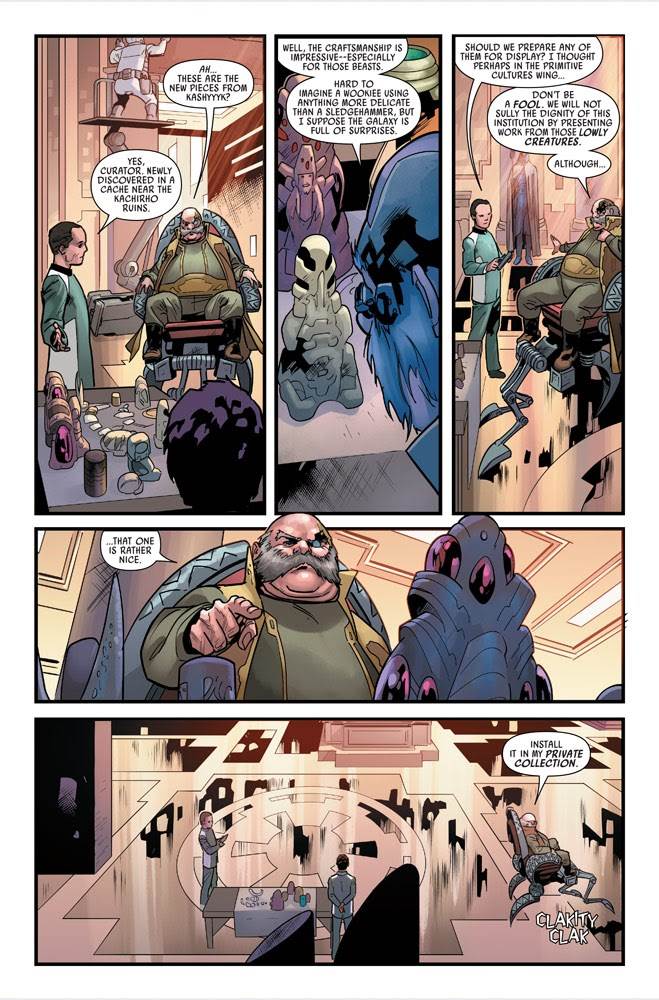 Seeing as how this is only the first installment of “Operation Starlight” (a reference to the Starlight Beacon of The High Republic fame– more on that in the coming weeks), issue #9 ends with a cliffhanger that promises more mystery and adventure for our heroes in the months ahead. New artist Jan Bazaldua (Marvel’s X-Force) isn’t my favorite penciller to contribute to this title, but her work is serviceable enough to more the story forward, and writer Charles Soule (Star Wars: The Rise of Kylo Ren) continues to do a great job in capturing the voices of the more familiar characters, while simultaneously introducing us to new and intriguing personalities. Beyond that, the cover for January’s issue #10 promises readers more Luke Skywalker action and the debut of “Starlight Squadron,” which are compelling enough reasons to continue picking up this comic in 2021. Star Wars (2020) #9 is available now wherever comic books are sold.