The Walt Disney Family Museum hosted another Happily Ever After Hours event on Wednesday, December 9th, with special guest Richard Kraft. As a co-founder of Kraft-Engel Management, Richard has spent his career representing musicians behind some of the greatest Disney songs and scores of all time including Richard Sherman, Alan Menken, Danny Elfman, Marc Shaiman, Bruce Broughton, Christophe Beck and John Powell, just to name a few. As a lifelong Disneyland fan, he also assembled one of the largest private collections of Disneyland memorabilia and famously auctioned it all off in 2018. 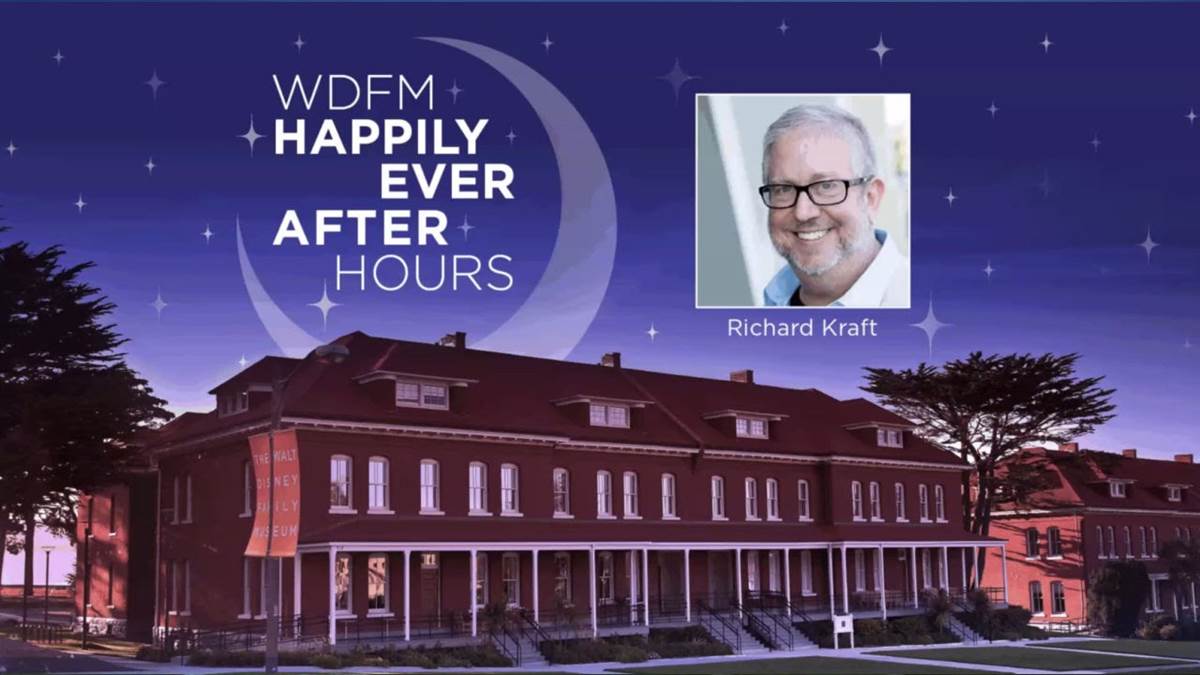 As a kid in Bakersfield, CA, Richard Kraft loved going to movie theaters and second-hand book shops with his dad. It was the Warner Bros. classic The Adventures of Robin Hood that awakened his senses to the music in the background of movies and sparked a love of collecting soundtrack records, with a collection of over 1,000 by the time he graduated high school. Long before internet blogs, Richard was calling up composers and interviewing them for a Xerox magazine.

Another cherished childhood memory was an annual trip to Disneyland, for which he and his brother would spend an entire year looking at their souvenir map and planning their strategy for their next trip. The music in Disneyland was another special memory for the young fan, who instantly knew that music from The Sherman Brothers was better than most. How fitting that he later went on to represent Richard Sherman.

Working as a Xerox operator for a small film company run by men who didn’t speak english, Kraft’s introduction to the publicity world came when he volunteered to write their copy for them. Later, he found himself working as a receptionist for a film music agency where he eventually became a junior agent and signed his first client, Danny Elfman. As a fan of Oingo Boingo, he instantly recognized that Elfman had already been writing film music for movies that just didn’t exist yet. Once Elfman became a prominent name, other composers wanted to be represented by the same management.

For a kid who wasn’t allowed to even look inside the Emporium because he couldn’t afford anything inside, Richard Kraft went from not owning many souvenirs to basically owning his own version of it’s a small world. His Disneyland collecting hobby started after the loss of his close brother, realizing that Disneyland brought him peace and reignited happy memories they shared. His collection grew huge, with a full-size Dumbo suspended from his ceiling and a backyard decked with a sea creature from the Submarine Voyage, a Peoplemover ride vehicle, and even a King Arthur Carousel horse that exploded when bees built a hive inside it. As a fun birthday treat with his son, they also produced a film about his collection called Finding Kraftland, which they ended up submitting in film festivals and won lots of awards. Since none of the rights were cleared, the film has been unavailable to the public ever since.

It was a family member who inspired him to start his collection, but also a family member who inspired him to part with it. With so much of his collection in storage and with a daughter with a rare disorder called Coffin-Siris Syndrome, he recognized that the money invested in his collection could be put to good use by organizations that help kids born with similar challenges. Before the auction, he gave his collection one last hurrah with a free event called “That’s from Disneyland.” Visitors could get an up-close encounter with many beloved items from the park’s history. Click here to see our coverage, including an interview with Richard Kraft. The auction raised over $8 million and now Richard Kraft spends his free time collecting something much more manageable, Disneyland postcards and ones from the Japan knockoff Nara Dreamland.

Another unexpected path for Richard Kraft has been directing several Hollywood Bowl shows. It all started with a Danny Elfman concert tour celebrating his work for Tim Burton movies. After a successful tour that included the Royal Albert Hall and a stop in Tokyo, Danny Elfman expressed his desire to do a show at the Hollywood Bowl just for The Nightmare Before Christmas. It was so successful that the bowl asked what he’d like to do next and his number one choice was The Little Mermaid. He arranged all of the talent for the event and eventually realized there wasn’t a director, but everyone was treating him as such. He went on to also direct shows of Beauty and the Beast, Willy Wonka and the Chocolate Factory and La La Land. On the last show, he worked with projection experts MouseTrappe, who worked for Disney on castle projection shows, to do projections on the shell of the Hollywood Bowl. Another Hollywood Bowl show is currently in the works for the future.

Richard Kraft recently discovered a new obsession, a little known gem from the 1980’s called Halyx, a sci-fi rock group. A fan-made documentary film by Defunctland called Live From the Space Stage caught his attention and he helped host a theatrical screening of the film near Disneyland. He also has a dream project he’d love to do that elevates Disney theme park music outside of the parks, akin to a Cirque du Soleil production like Beatles Love.