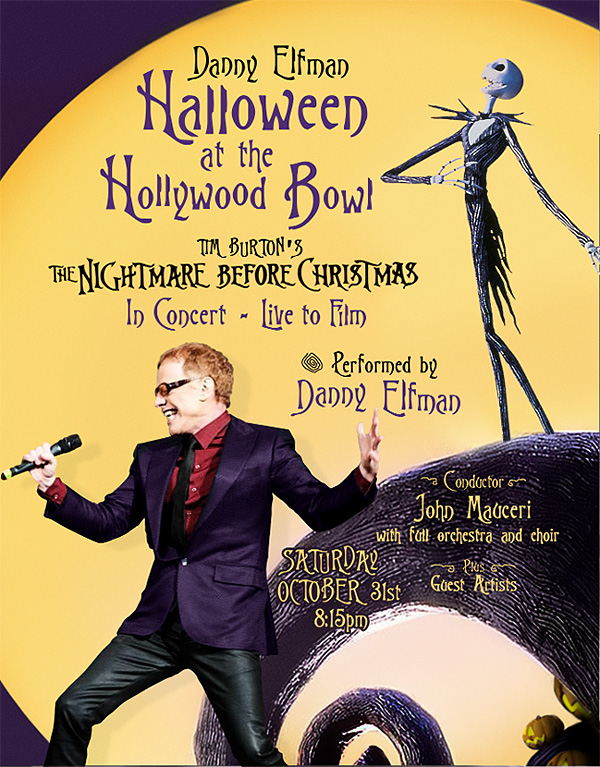 It was announced today that Danny Elfman will be performing a Nightmare Before Christmas concert at the Hollywood Bowl on Halloween night.

Joining Elfman will be a cast of singers and Special Guest Artists to perform the film’s acclaimed songs live. Conductor John Mauceri will be making his triumphant return to the Hollywood Bowl where he was the Founding Director of the Hollywood Bowl Orchestra and served for 15 years as Conductor, Principal Conductor and Director. Maestro Mauceri will conduct a full orchestra and choir performing the film’s classic score and songs live to picture.

DANNY ELFMAN: HALLOWEEN AT THE HOLLYWOOD BOWL- “TIM BURTON’S THE NIGHTMARE BEFORE CHRISTMAS- IN CONCERT TO FILM” will transform this legendary venue into Halloween Town with special pre-show activities including an audience participation Costume Contest. Tim Burton-inspired costumes are encouraged.

Danny Elfman composed the songs (music and lyrics), the score and was the original singing voice of Jack Skellington.

Tickets go on sale Friday, September 18 at noon through Ticketmaster.

UPDATED: With the first show sold out, Elfman has announced an encore performance the following night, Sunday, November 1 at 6:30 p.m. Tickets for this performance will go on sale at noon on Friday, September 25.