It’s kind of a shame, after such a strong year for fresh Star Wars content, that the final piece of original narrative material coming out of Lucasfilm in 2020 is another issue of Marvel’s lackluster Star Wars: Bounty Hunters comic book. I’ve tried really hard to enjoy this series, but it still just isn’t doing it for me since first launching back in March.

Issue #8 of Bounty Hunters begins a new story arc for the title, entitled “The Terminus Gauntlet,” with this initial chapter being called “Moving Target.” Writer Ethan Sacks starts off with a surprise flashback to bounty hunter Beilert Valance’s time serving as a TIE fighter pilot alongside a young Han Solo in the Imperial Academy (previously glimpsed in the 2018 Han Solo: Imperial Cadet comic miniseries). Valance feels abandoned by Solo and his fellow wingmates after crashing on the planet Qhulosk, but due to that experience learns he needs to fight for his own survival in such a dangerous galaxy. 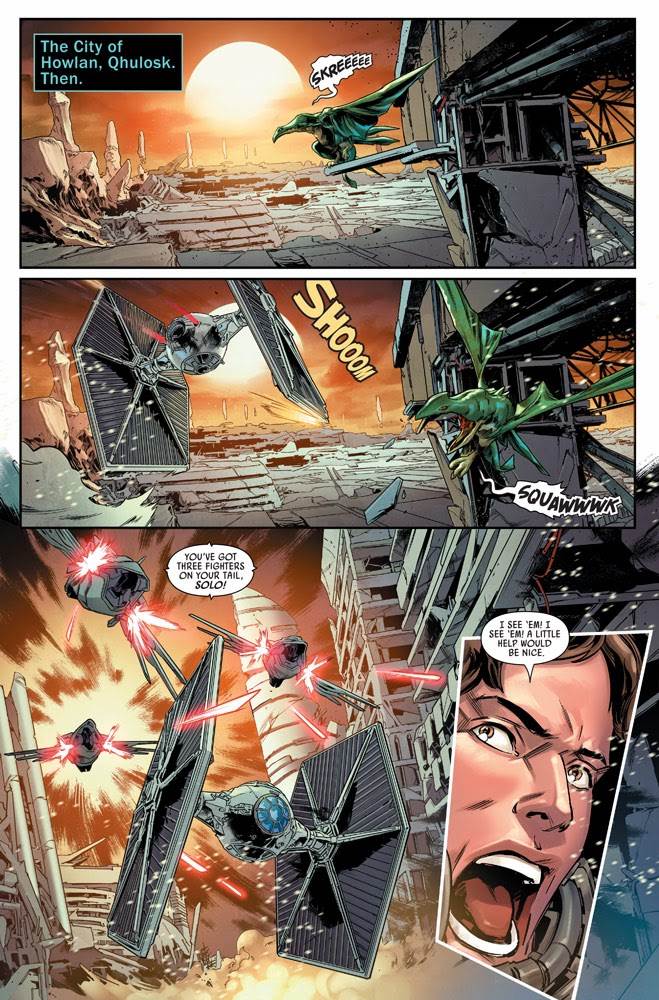 Back in the “present” of the comic (the period between the events of The Empire Strikes Back and Return of the Jedi), Valance pays a visit to a seedy nightclub on Nar Kaaga in Hutt Space, where he meets up with– then gets promptly double-crossed by– a cyborg contact named Syphacc, who sics an up-and-coming assassin called Tasu Leech on him. Naturally, as is this series’ M.O., a fight breaks out between Valance and his would-be murderer until our protagonist once again wins out and escapes to flee to his next location. Back in the Broken Wing, Beilert gets a call from Kondra, the Rebel Alliance soldier who helped him out in previous issues, asking for repayment in the way of rescuing some rebel troops whose transport got stranded in pirate territory thanks to a hyperdrive malfunction. “Moving Target” ends with Valance finding more than he bargained for at the transport’s last known coordinates, a tease of the return of another famous bounty hunter from The Empire Strikes Back who hasn’t yet appeared in this run, and an admittedly somewhat intriguing reveal of what’s become of a recognizable faction from Star Wars lore we hadn’t heard about in a while. We’ll be getting more Star Wars: Bounty Hunters in the new year, and as always I’ll continue to hope that this comic finds a way to hold my interest a bit better. I’m also still not in love with Paolo Villanelli’s artwork here, so I’ll cross my fingers Bounty Hunters lasts long enough to experiment with a change in creative team. Until then, I’ll assume we’re in for more of the same type of planet-hopping and blaster fights as the title continues in 2021.