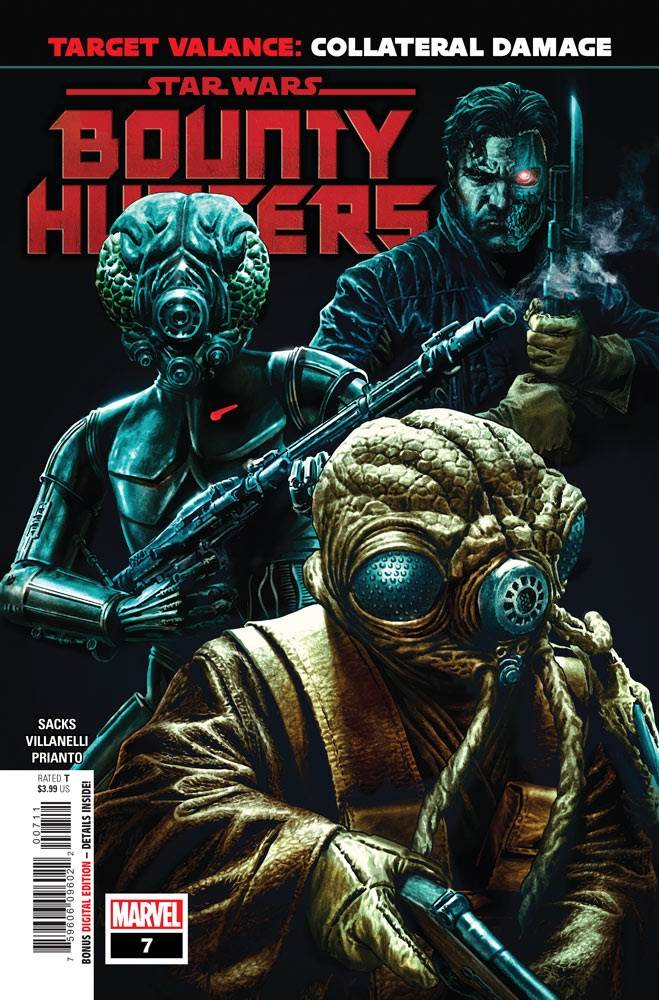 Star Wars: Bounty Hunters continues to cement itself as my least favorite of the four current ongoing Star Wars titles from Marvel Comics with this month’s issue #7, entitled “Target Valance: Part 2 – Collateral Damage.” With this installment, the book has repeated its pattern of “Beilert Valance travels to a new location, bounty hunters pursue, there’s a big fight, Beilert heads off to a new destination” one too many times for me to look forward to reading any more.

Valance and his ward Cadeliah (the daughter of two star-crossed members of rival Corellian gangs) have arrived on the jungle planet of Lowik, the site of a secret Rebel Alliance base that Beilert once helped arm, with hunters Zuckuss and 4-LOM in hot pursuit. The Gand and droid partners release a battalion of leftover B2-series super battle droids to raid the planet, while Valance seeks medical assistance from his former paramour Yura, who has married a man named Kondra in the time since Beilert abandoned her on Lowik years earlier. 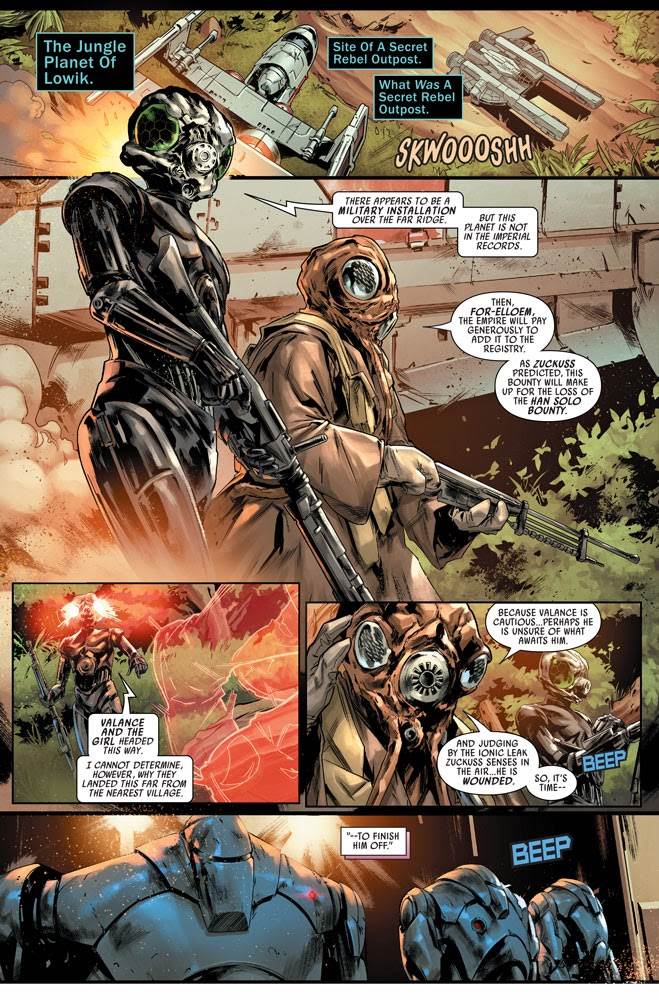 We get a flashback to Valance’s contentious departure, with Yura bestowing him with the treasured fire Ruby we’ve seen him carrying since the Star Wars: Target Vader comic miniseries. The local rebel military deals with the battle droids while Beilert gets patched up and then sends Yura with Cadeliah through a secret tunnel to their perceived safety. At that point 4-LOM shows up at Yura’s hut and he and Valance go at it for the requisite half-dozen pages. Then Zuckuss ambushes the two young women as they flee, but Beilert is eventually able to buy off the two bounty hunters by giving up a symbolic piece of his personal history. I guess it’s a tidy way to wrap up the Yura storyline, but the fact that he also leaves the seemingly-important Cadeliah on Lowik with the soon-to-be-evacuating rebels means we’ll be seeing those characters again down the line. I’ve been finding it difficult to express what exactly hasn’t been working for me about Star Wars: Bounty Hunters, but this issue felt especially egregious in its clunky storytelling, awkward staging, and still sadly unattractive artwork. I keep hoping writer Ethan Sacks and artist Paolo Villanelli will pull it together and the title will see improvement as it goes along, but right now my only real hope is that a new team takes over after the next arc or two. There’s so much potential in a story about the bounty hunters of Star Wars set between the events of The Empire Strikes Back and Return of the Jedi, but I honestly can’t say that this effort is even coming close to meeting it. For the time being, we’ll have to wait and see how this particular story plays out, and whether the Unbroken Clan and the Mourner’s Wail Syndicate can put aside their differences and allow Cadeliah to take her rightful place as mutual heir and, hopefully, peacemaker.