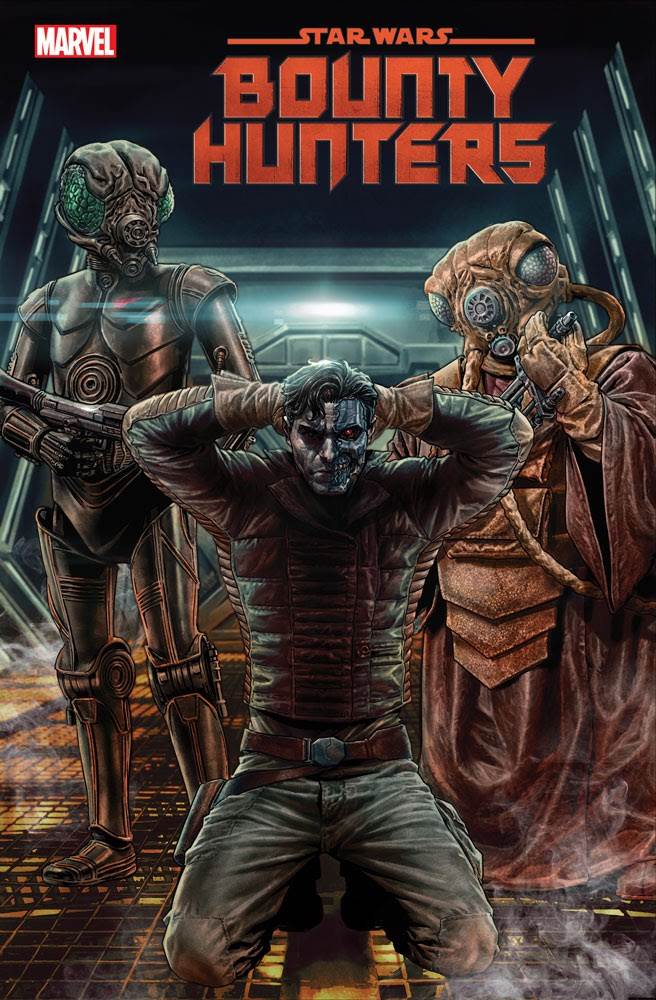 I’ve been remarking for a while now how ironic it is that Star Wars: Bounty Hunters is my least favorite of the four currently running Marvel Comics titles set in A Galaxy Far Far Away. I adore the bounty hunters of the Star Wars universe as a concept so much that I even named my podcast after one of them, but somehow this publication just isn’t doing it for me so far.

I think it has a lot to do with the heavily stylized art by Paolo Villanelli, which just doesn’t fit my sensibilities, but there’s also something of a lack of clarity and drive in the storytelling by writer Ethan Sacks that as yet hasn’t made me excited to pick up the next issue. 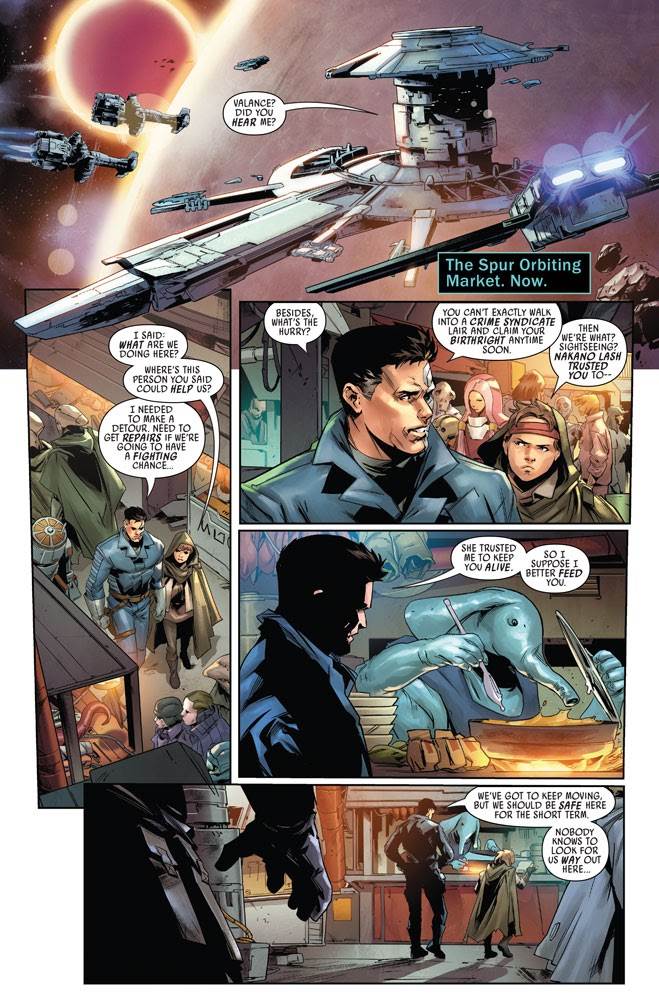 Star Wars: Bounty Hunters #6 is the first chapter in the series’ second arc entitled “Target Valance,” a reference to last year’s Star Wars: Target Vader miniseries that put the spotlight on Beilert Valance (AKA Valance the Hunter, who originated in the original 1970s Marvel Star Wars comic book) for the first time in current continuity. Valance is on the run with the orphaned Cadeliah– a child born to two star-crossed heirs of rival crime syndicates– but we also get flashbacks to the bounty hunter’s youth on the mining planet of Chorin and his departure from an old flame named Yura, prior to his time with the Empire and his disfigurement at Mimban, as depicted in Star Wars: Han Solo – Imperial Cadet. 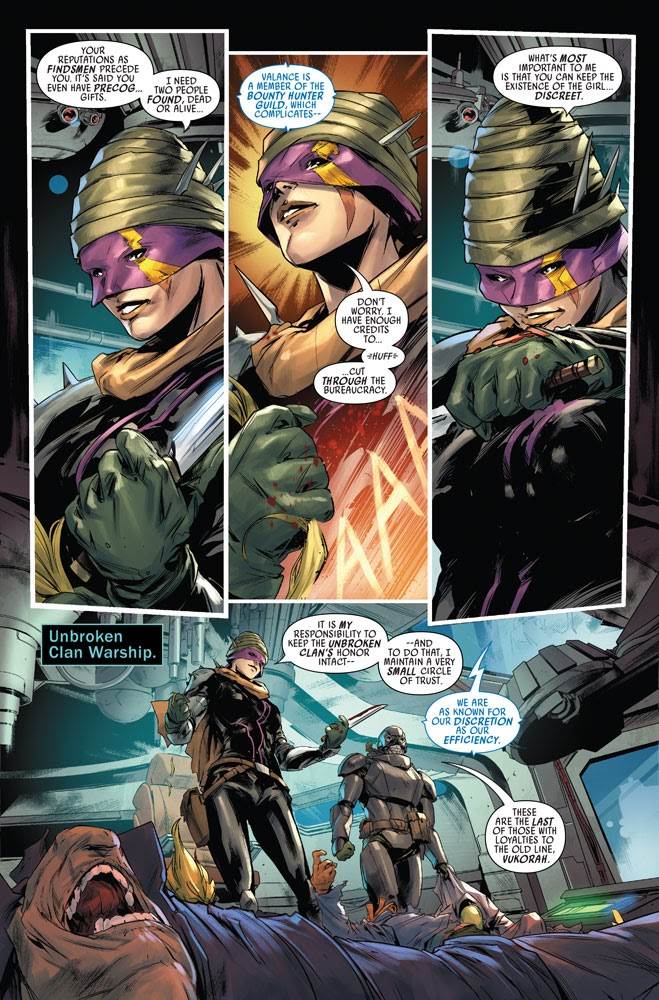 The Unbroken Clan (one of the above-mentioned warring crime families) is desperate to track down Valance and his new ward, so much so that they hire famed hunters Zuckuss and 4-LOM to complete the job. Yes, the Gand findsman and his droid partner who first appeared on the bridge of Darth Vader’s Super Star Destroyer Executor in that iconic scene from The Empire Strikes Back have been tasked with tracking down Beilert and Cadeliah. After our protagonists run into– and battle to the death with– another bounty hunter on the Spur Orbiting Market space station, their guard is up as Valance is in need of repairs to his cybernetic components. This all leads to another extended battle between Beilert, Zuckuss, 4-LOM, and Cadeliah inside an underworld repair shop. 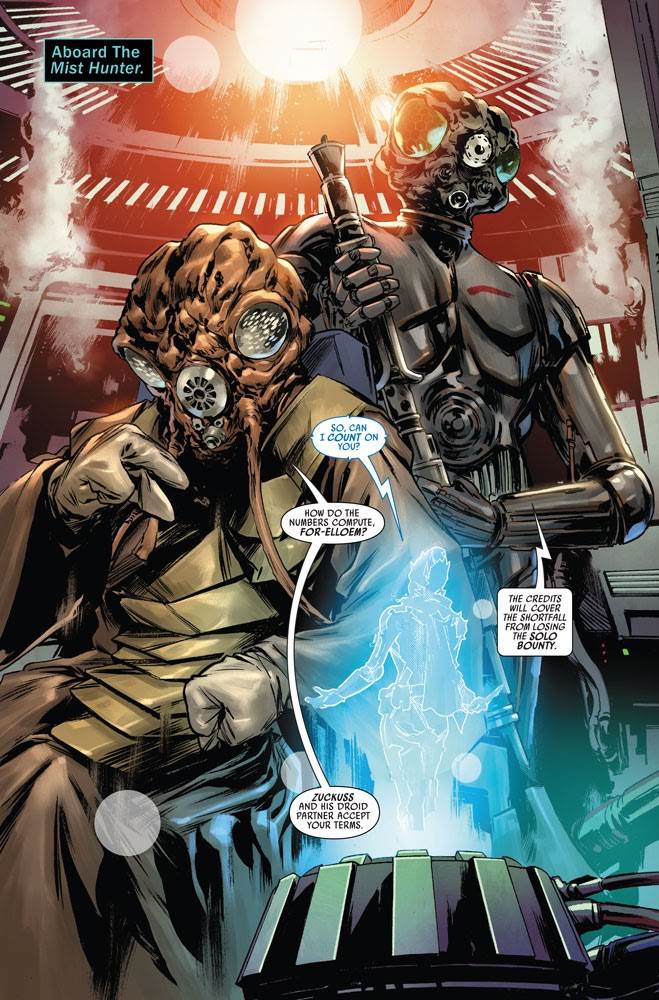 I won’t spoil how that climactic encounter ends, except to say that it culminates in another tepid cliffhanger ending that only barely has me itching to find out what happens next. It’s become clear at this point that Star Wars: Bounty Hunters is going to be an ongoing series about a bunch of characters endlessly chasing each other around the galaxy and then blasting away at each other, and I suppose that makes sense given its title, but at six issues in the title hasn’t quite justified its own existence. I do appreciate the change of status quo that came with the end of the previous arc and the beginning of “Target Valance,” but I’m also really hoping Sacks and Villanelli find a way to make things more interesting as this new story continues in the months to come. 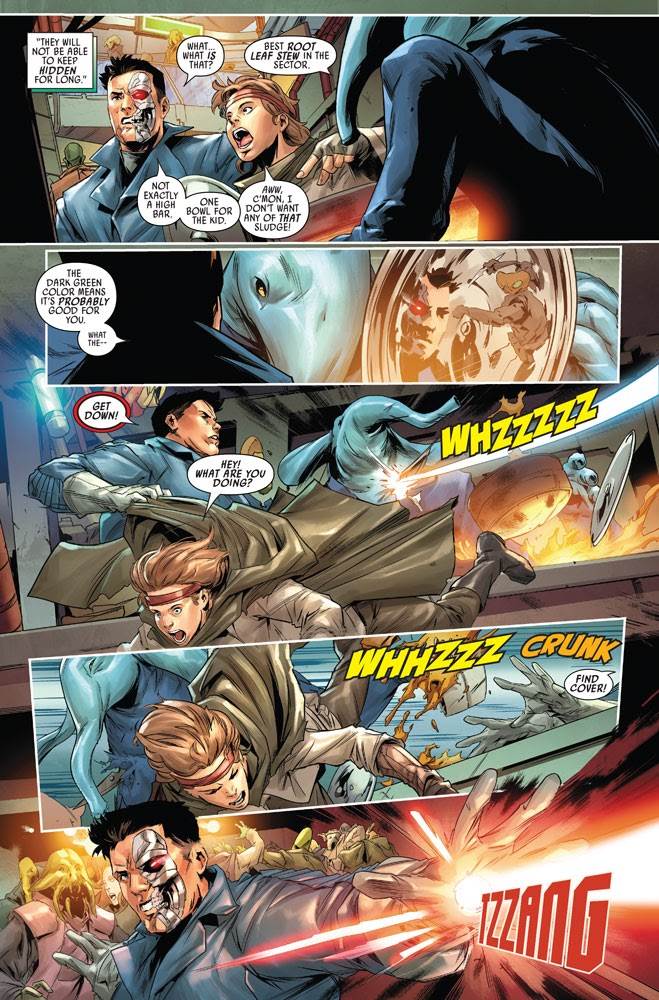