Bryan Adams had a hit song with “Summer of ‘69,” a year that saw man land on the moon and went down in music history for the historic Woodstock concert event. But another historic music event happened that same summer, one that was erased and forgotten, a celebration of Black American identity called the Harlem Cultural Festival. The directorial debut of musician, songwriter, DJ and journalist Ahmir “Questlove” Thompson, Summer of Soul (…Or, When the Revolution Could Not Be Televised) is a concert film mixed with a documentary that produces an enlightening and entertaining experience. It had its world premiere at the Sundance Film Festival. 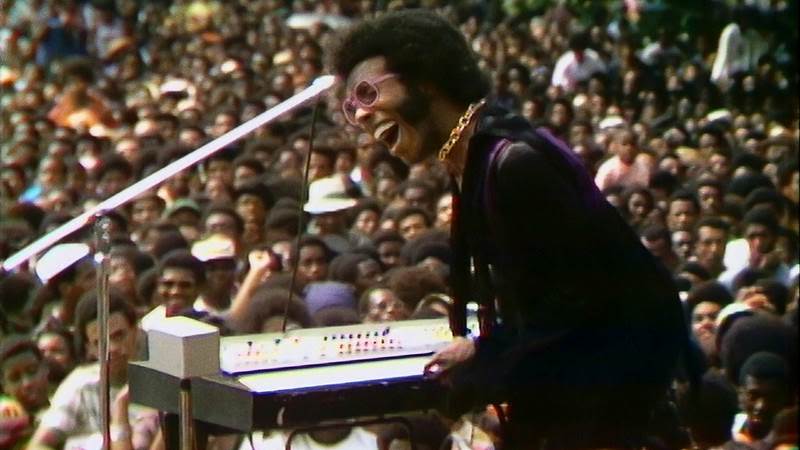 Stevie Wonder, B.B. King, Gladys Knight and the Pips, Sly and the Family Stone and many others were there, performing songs across a wide range of genres including soul, motown, blues and gospel. Held just a year after the assasination of Dr. Martin Luther King, Jr., the Harlem Cultural Festival was a moment of unity and celebration for Black residents in Harlem at a time when the African American community took ownership of the word “Black.” The historical importance of the year is highlighted through interviews with some of the performers, event attendees, and musical experts.

Like Woodstock, the Harlem Cultural Festival was filmed in color from multiple angles. Unlike Woodstock, no television networks were interested in broadcasting the footage and it has lain dormant ever since. The event itself was not repeated and was lost to time, but when Questlove discovered that so many of his musical heroes took part, he was inspired to create the film. What emerges is a joyous celebration with legendary musical performances caught on film at a unique moment in time, along with interviews that provide historical reference and the cultural importance of the era.

Summer of Soul is likely to sell for a big price to a distributor, but there are several reasons why it’s a perfect fit for Disney+, who I hope is looking at it. First, the title, setting and musical elements make it a perfect pairing with Pixar’s Soul, which also features Questlove as a voice actor. Second, Disney has sought out concert films from Beyoncé and Taylor Swift and the preview of The Beatles: Get Back was very popular on the streamer, with this film featuring other notable acts from the same era. Third, there’s no objectionable content here, save for a brief conversation about drugs in Harlem from a historical context that doesn’t glorify it. For that reason, it can be used as a teachable moment for the whole family, a musical history lesson about the Civil Rights Movement. And lastly, Disney+ is reportedly having trouble with churn of their adult subscribers without kids and a must-see event film like Summer of Soul is likely to get a lot of them back.

The film often plays like a who’s who of commentators, which includes among its many experts Lin-Manuel Miranda, who discusses the unique Afro-Puerto Rican and Afro-Cuban music that emerged from the blending of those cultures in Harlem. The festival didn’t just include musicians, with Reverend Al Sharpton discussing the prayer at the event led by Reverend Jesse Jackson. Other non-musical participants featured in the film are comedian Moms Mabley and ventriloquist Willie Tyler.

Summer of Soul (…Or, When the Revolution Could Not Be Televised) chronicles a celebratory event in the middle of the Civil Rights Movement. It showcases how far we’ve come and how far we still have to go towards achieving true equality as a nation, but most of all, it’s a celebration of Black American culture through music. It’s a legends-only must-see event that needs to reach as wide an audience as possible.

I give Summer of Soul (…Or, When the Revolution Could Not Be Televised) 5 out of 5 stars.