Walt Disney Animation Studios is known for animated classics, creating timeless characters and designing fantastic worlds that you want to live in. But the secret to their success, which has endured for over eighty years, has always been storytelling. That’s true regardless of the medium the artists are using and on Friday, February 26th, the studio’s latest virtual reality project, Myth: A Frozen Tale, comes to Disney+ in a new flat format, available for the first time to viewers who don’t own an Oculus.

While the story exists in the world of Arendelle and the Enchanted Forest, director Jeff Gipson was inspired by a childhood memory of a story that had been passed down through his family for generations. His ancestors lived on a farm in Missouri and one day two of their horses were stolen. But then two new horses, better horses, appeared with a thank you note signed by “J.J.” The only figure with those initials in the area that the family knew about was the famous outlaw Jesse James. That story filled Jeff with a sense of wonder and excitement and got him thinking about the types of stories families might share in Arendelle.

Released after Frozen 2, the team didn’t have to shy away from spoilers and were able to include the bonus fifth spirit in the story that restores balance to the Enchanted Forest. The VR space necessitated stylizing the world of Frozen 2 and within the setting of an Arendelle family telling the mythical story of the elemental spirits, he was looking for an artist who could help him make the film look almost like a pop-up book. Thankfully, an artist at the studio was already famous for creating 3D paper art and she was very intrigued by the concept.

“When Jeff was pitching this project in my department, I just immediately felt like it was being pitched directly to me because the aesthetic of the storybook and pop-up book was so in line with my personal aesthetic,” visual development artist Brittney Lee reflected about how she came to be involved. “I immediately really wanted to work on this project and was so happy to get the opportunity to dive into this Myth world. One of the first things that we decided that we needed to look at was, how do we stylize this world that is part of an already stylized world of Frozen? So we decided to look toward some influences that Frozen looked to as well.”

Eyvind Earle’s stylized work on Sleeping Beauty, particularly the way he drew the forest where Aurora and Prince Philip shared their “Once Upon a Dream” meet-cute, inspired the Frozen 2 art department for the Enchanted Forest. Pulling in those sources of inspiration, Brittney Lee also drew upon one of her favorite artists, Disney Legend Mary Blair. “Mary Blair is one of my personal heroes and a huge inspiration,” Brittney Lee shared, explaining that for Myth, the shape language is Eyvind Earle while the colors are more in line with Mary Blair. Brittney Lee also illustrated the book Mary Blair’s Unique Flair.

The elemental spirits from Frozen 2 look different in Myth: A Frozen Tale by design for the purposes of visual harmony. The spirits of wind, fire, water and earth were each assigned a jewel-tone color so that when the fifth spirit unites them all, a prismatic effect dazzles viewers. The diamond-shaped symbols that the Northuldra people assigned to each spirit, visualized on stone ruins, are also incorporated into each of the spirits and the elemental properties they possess. “We really leaned into the diamonds,” director Jeff Gpison explained. “It's in the water splashes, it's in the fire embers, it's in everything! The cliffs…just really integrating it. I like how we just kind of tried to push it into all the places.”

Helping the team evoke the feeling of watching classic animated films set to music like Fantasia, hand-drawn elements are incorporated into many of the sequences, animated by Dan Lund. This includes water splashes evocative of Sorcerer Mickey using his magical powers. Composer Joseph Trapanese was also brought on board early on, tasked with writing musical themes for each of the spirits, inspired by Sergei Prokofiev’s Peter and the Wolf, which was adapted into animation by Disney in 1946 in the package feature Make Mine Music.

A big challenge with VR is that viewers have the ability to look wherever they please, meaning Jeff Gipson and Brittney Lee had to work harder to draw that viewer’s attention to story moments that need to be seen. Walt Disney Imagineering helped solve that problem in an indirect way, with Guests on a Disneyland attraction having a similar 360 experience. Not only did classic Disney dark rides help the team decide how to get the audience's attention in a particular place, but also how to help create their pop-up book world, with attractions like it’s a small world featuring a similar esthetic.

While Myth: A Frozen Tale was designed for an experience that places viewers in the center of the action, the story was still conceived in the tried-and-true storyboard process invented at Disney in the 1920’s. Josie Trinidad created the storyboards, which were then transferred into a VR painting program that allowed the team to expand the frame. Those storyboards helped when it came time to create the streaming version of the short, the version the short’s biggest audience will experience on Disney+.

“For some of it, we looked at the storyboards we initially pitched,” Jeff Gipson shared, although they couldn’t rely solely on them. “Some of the action, some of the things have changed since then, but we worked with Terry Moews, he did all of our cinematography work. We watched the VR version multiple times and were thinking, ‘Wow, how can we capture this feeling, this presence, but bring it to a screen so people can watch it on streaming?’” When viewers see the film through a stereoscopic headset, many of the elemental spirits feel like they’re right there with you. 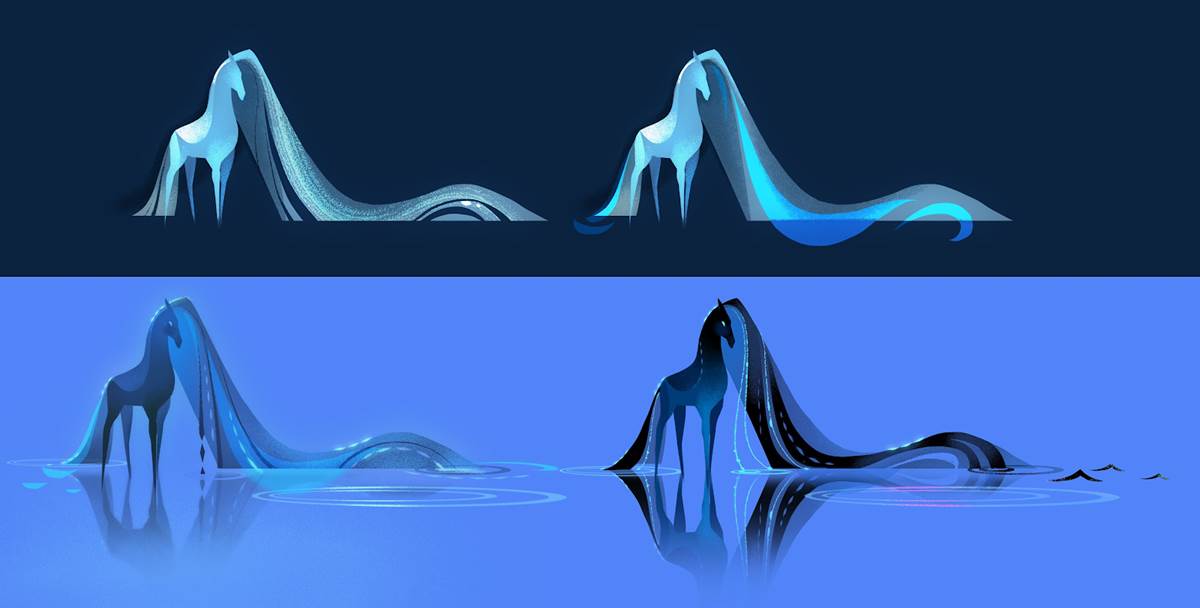 “What was important to me in the streaming version is creating the sense of presence of being with these elemental spirits,” Jeff Gipson added. “They're also unique if you think about their scale, their size, what they are all kind of bringing. When we were creating the VR version, part of that magic is being able to be with each one of these characters, so we wanted to bring that same kind of feel to our streaming version.”

Myth: A Frozen Tale isn’t just innovative for being produced for VR, the second such film created at Walt Disney Animation Studios (the first was Cycles, also directed by Jeff Gipson), but also because it was made in real-time. “It's almost like we were on a live-action set and Brittney and I are pointing on a tree over here, a tree over there,” Jeff Gipson explained about how they were able to dress the sets in the short in a high-tech environment, with assistance from a team of nearly a hundred artists. “Our amazing environment lead, Mike Anderson, he was so patient working through it with us.” Brittney added that somewhere there’s probably some hilarious  video footage of her and Jeff with goggles on moving a wand around in a white void.

When Myth: A Frozen Tale arrives on Disney+ on February 26th, viewers will get to hear an Arendelle legend about elemental spirits set to beautiful music with gorgeous imagery. The experience may be different by design from its original VR format, but the storytelling experience remains the same. It dazzles and enchants like the prismatic color scheme the fifth element brings into the final act. Don’t miss your opportunity to return to the world of Frozen on Disney+.