TV Review: “DuckTales” Packs in Everyone for its Epic Triple-Sized Series Finale “The Last Adventure!” “I’m not ready for our adventures to be over.” So says Della Duck (voiced by Paget Brewster) as she prepares to say goodbye to her departing brother Donald (Tony Anselmo) near the beginning of today’s epic, triple-sized series finale of the 2017 DuckTales reboot on Disney XD. But that’s just the start of a 90-minute escapade (roughly 67 minutes without commercials, so not quite feature-length) that crams in just about every recurring character to become part of the series since it debuted three and a half years ago.

And in solving the remaining mysteries of the Duck/McDuck family and their exploits into derring-do, the DuckTales finale “The Last Adventure!” uncovers the one conundrum most fans– well, me anyway– never really thought to ask about: what are the true origins of Webbigail Vanderquack AKA Webby (Kate Micucci), the orphaned granddaughter of Scrooge McDuck’s (David Tennant) live-in maid and secret super-spy Bentina Beakley (Toks Olagundoye)? 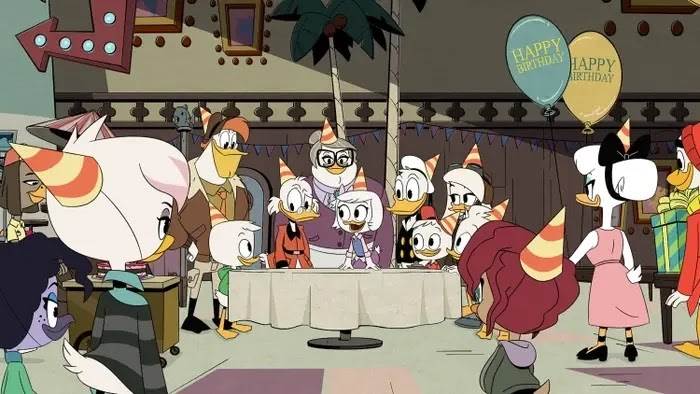 “The Last Adventure!” begins with a birthday party for Webby at Funso’s Funzone, which was covertly planned as a raid on F.O.W.L. headquarters, as viewers will remember was located underneath the children’s arcade. Our heroes find that the various F.O.W.L. agents have abandoned their base but left behind two clones of Webby named May (guest star Riki Lindhome, better known as Micucci’s Garfunkel and Oates bandmate) and June (former Saturday Night Live cast member Noël Wells). Why were the clones created? Are they benign or malevolent? Uncle Scrooge and family spend most of the first half hour of the finale attempting to answer these questions until May and June steal the “Missing Mysteries” the family had collected over the show’s third season, evidently kidnap Webby (we know she’s too capable to really let that happen to her) and abscond with F.O.W.L. and a stowaway Huey (Danny Pudi) to the renowned and once-thought-lost Library of Alexandria in Egypt.

Meanwhile, Donald plans to leave on an extended and much-needed vacation with his new girlfriend Daisy (Tress MacNeille) until his packing is interrupted by Webby and Huey’s apparent abduction, Mrs. Beakley disappears vowing to take care of F.O.W.L. on her own, and Scrooge begins to put together a not-so-crack team made up of Della, Donald, Launchpad McQuack (Beck Bennett), Gizmoduck (Lin-Manuel Miranda), Darkwing Duck (Chris Diamantopoulos), and that cantankerous scientist Gyro Gearloose (Jim Rash)– not to mention his enigmatic assistant Manny the Headless Manhorse, who gets a surprise payoff of his very own– to stage a rescue. Naturally, Huey’s brothers Dewey (Ben Schwartz) and Louie (Bobby Moynihan) demand to participate in the mission alongside robot boy B.O.Y.D. (Noah Baird), Webby’s best friends Violet (Libe Barer) and Lena (Kimiko Glenn), and Drake Mallard’s adopted ward Gosalyn (Stephanie Beatriz). That list alone should give you an idea of just how many guest stars are packed into this one episode. I spent some time trying to decide whether they left anybody out, but I don’t think so. 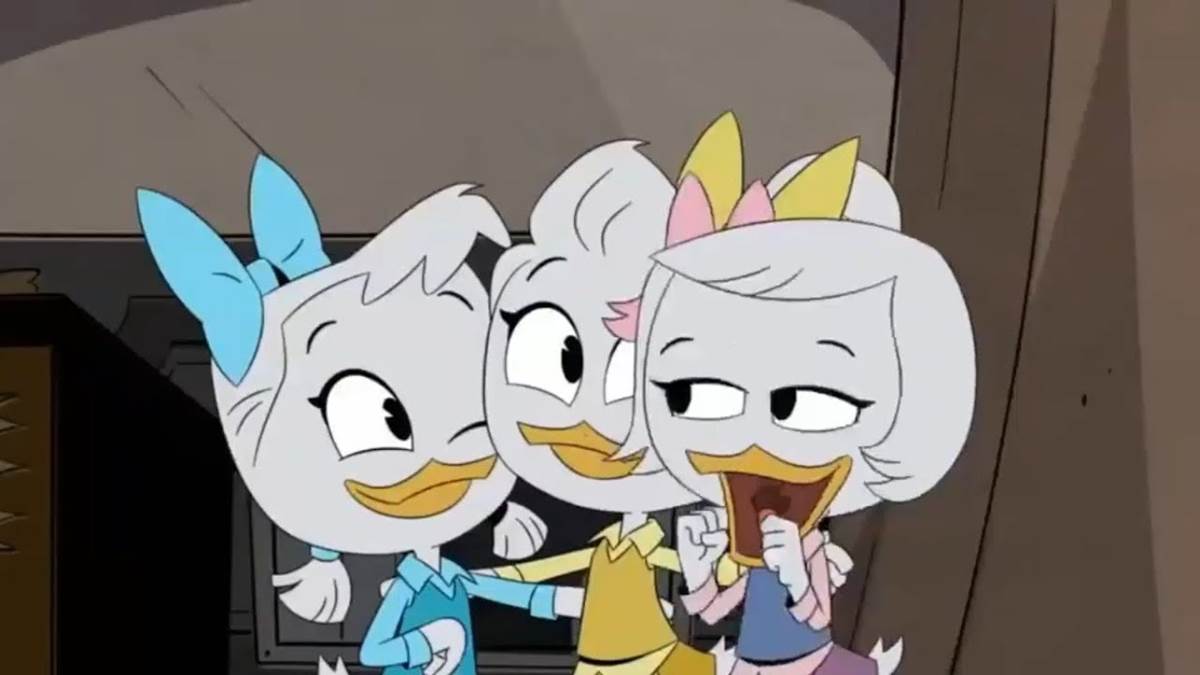 Anyway, the remaining two-thirds of this perfectly overstuffed series finale are spent facing off against F.O.W.L. at the ancient library, where we learn more about the nefarious Bradford Buzzard’s (Marc Evan Jackson) evil plan to erase the Duck family and their adventures from existence using a collection of artifacts the show impressively set up in previous episodes. We also get the big reveal about Webby, of which I won’t spoil the specifics here, but I will say it feels very fitting that she turns out to be the center of the McDuck family riddle she herself was trying to solve way back in the series premiere– I loved seeing that “crazy person” connection board pop up again here while they’re still at the mansion, just to reestablish that Webby is appropriately the one who’s been the most invested in the clan’s history of interconnected adventuring. Along the way we see Scrooge’s team take on F.O.W.L. agents like Steelbeak (Jason Mantzoukas), the Phantom Blot (Giancarlo Esposito), Pepper (Amy Sedaris), John D. Rockerduck (John Hodgman), and Black Heron (April Winchell) and other cameo-ing villains I will also choose to refrain from spoiling in this review. Plus, the nephews put their own unique talents to good use and Darkwing hilariously stumbles across what he believes to be Gizmoduck’s true identity.

There’s more going on here than I’m capable of fitting into a reasonably sized recap, but suffice it to remark that “The Last Adventure!” feels more like a worthy DuckTales movie than the 1990 Disney MovieToons theatrical outing Treasure of the Lost Lamp. Along the same lines, I would almost go so far as to say that the DuckTales reboot, as a whole, has eclipsed the original 80s Disney Afternoon series in terms of consistency of quality, animation, humor, and overall rewatchability. Going back and trying to rewatch some of those classic episodes is fun, but they don’t ever quite hold up to what my mind’s eye remembers as DuckTales. This show, however, somehow managed to absolutely capture that spirit first established by Scrooge McDuck creator Carl Barks in his beloved Donald Duck and Uncle Scrooge comic books of the 1940s and 50s, while simultaneously honoring and building upon that 80s cartoon and adding its own style, mythology, and reason for being. The message at the end of today’s DuckTales series finale is obviously one of family… but in successfully executing this reboot, showrunners Matt Youngberg and Frank Angones have undeniably created a family of their own– one consisting of their incredibly talented team of writers, voice actors, and animators, but with its core members being the entirely new generation of fans the show will undoubtedly continue to inspire and influence creatively for decades to come.