The overarching plot of this final season of Disney XD’s DuckTales reboot has seen the Duck / McDuck family go up against the criminal organization known as F.O.W.L., but showrunners Matt Youngberg and Frank Angones were smartly also intent on putting a button on the stories of a few of Scrooge McDuck’s other nemeses in the show’s penultimate installment, “The Life and Crimes of Scrooge McDuck!”

The episode opens with nephew Louie (voiced by series regular Bobby Moynihan) having unleashed a decidedly Tribble-esque menace on McDuck Mansion and Scrooge (David Tennant) trying to teach the lad to take responsibility for his own actions, just before the two relatives are whisked away to an ethereal realm known as Karmic Court. There, prosecutor Doofus Drake (John Gemberling from ABC’s Mixed-ish) forces Scrooges to stand trial against three of his greatest enemies: Flintheart Glomgold (Keith Ferguson of Foster’s Home for Imaginary Friends), Ma Beagle (character actress Margo Martindale of August: Osage County), and Magica De Spell (English comedian Catherine Tate, who also appeared alongside Tennant on the BBC’s Doctor Who). Doofus’s legal strategy is straightforward: he claims Scrooge to be the cause of the villains becoming, well, villains, and demonstrates this by playing a series of flashbacks on a seemingly omniscient movie screen in the courtroom (how any of this works or how Doofus managed to figure out how to take advantage of this system doesn’t really matter– the audience is asked to just kind of accept the premise and move on, which is fine. It works in its own magical-surrealism DuckTales kind of way). The first flashback shows us how Scrooge outsmarted Glomgold during a treasure-hunting quest and managed to accidentally become beloved on top of already being the “Richest Duck in the World” along the way. He saves reporter Webra Walters (another Easter Egg holdover from 1987’s original Disney Afternoon DuckTales, now voiced by Kari Wahlgren of Rick and Morty)– who Flinty had left to die in shark-infested waters– and claims a treasured jewel in one agile movement. 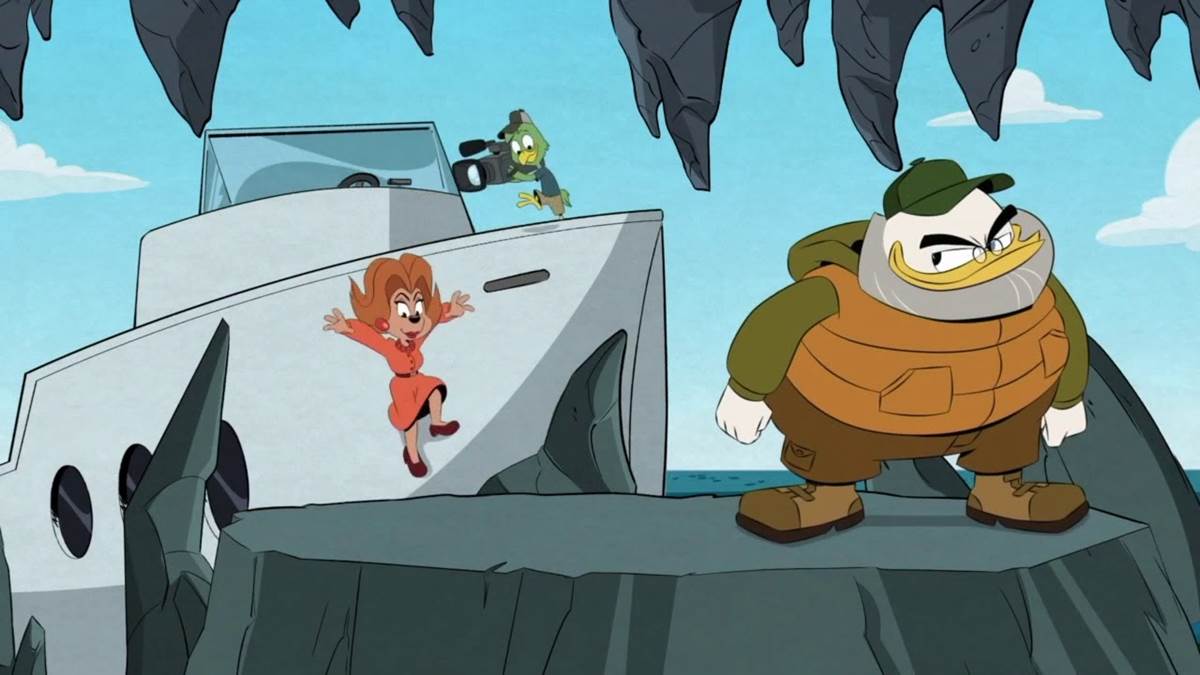 Naturally Glomgold is decreed to be the architect of his own fate, but a more challenging case is presented in the flashback involving Ma Beagle, who came face-to-face with Scrooge at a young age when the “Adventure Capitalist” out-swindled the swindlers in the Beagle family. Her father, the never-before-seen Pappy Beagle (prolific voice actor Eric Bauza of Transformers: Robots in Disguise), loses to McDuck in an arm-wrestling match that Scrooge reveals to have been rigged and therefore wins the Beagle family town, causing the young “Ma” to swear a lifelong vengeance. But Louie– acting as Scrooge’s counsel in the case– cleverly has the court play further into the flashback, and we discover that Ma Beagle was already rotten to the core, so she’s sorted into the “innocent” side of Lady Justice’s scale in favor of Scrooge’s vindication. 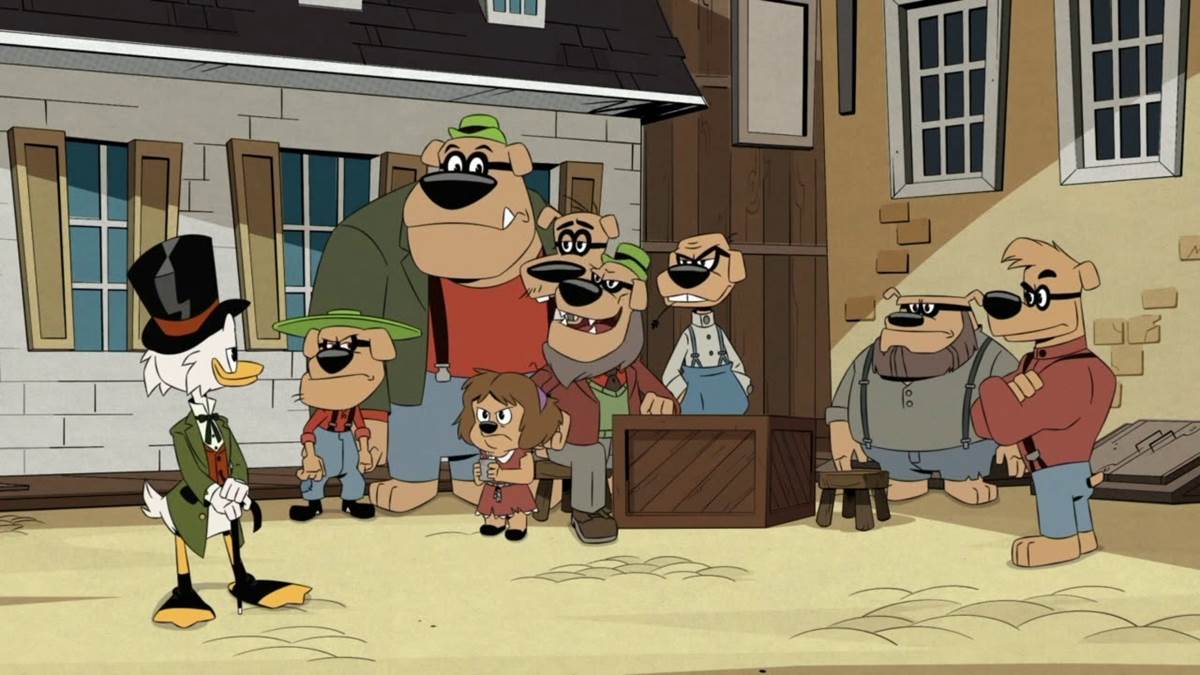 The final flashback involves Magica De Spell and her sorcerer brother Poe (another holdover from the 80s, this time voiced by Black Panther’s Martin Freeman), who come into conflict with Scrooge McDuck when one of their evil spells attempts to collect the multiplujillionaire’s Number One Dime. Again Scrooge outsmarts his adversaries and Poe ends up being transformed into a raven, once again earning the duck another lifelong vow of vengeance. Back in court, Scrooge comes to the remarkably healthy realization that someone with so many enemies must bear at least a little bit of the blame, and he apologizes to Doofus and the other villains in the room, though only Drake takes this contrition in stride and disappears. The others stand firm and are awarded with Scrooge’s fortune because of his admission of guilt, and at first I thought this would serve as a cliffhanger leading into next week’s series finale, but at the last moment Louie realizes that Scrooge was created by his enemies just as much as he created them, Batman-style. This earns our protagonists a reprieve and Scrooge gets back his fortune just in time to return home and prepare for a final confrontation with F.O.W.L. All in all, I thought this was a very solid sendoff to some of DuckTales’ most notorious evildoers, assuming we don’t see them again in the finale. 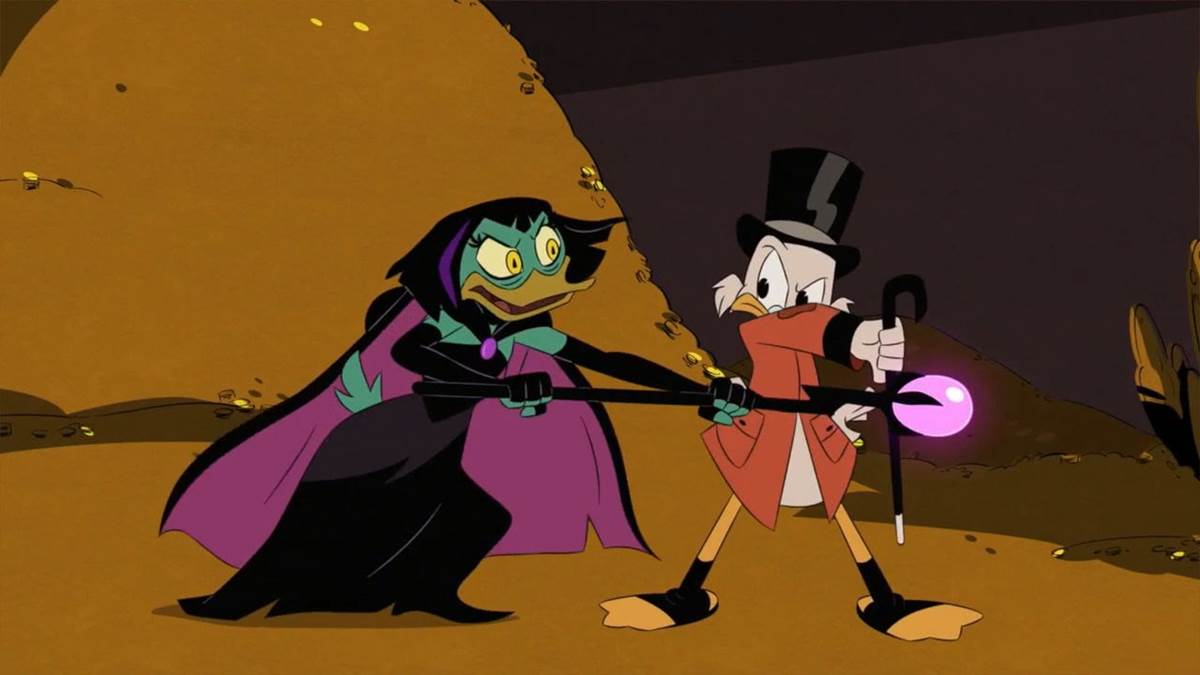 The 90-minute series finale episode of DuckTales (entitled “The Last Adventure!”) will air next Monday, March 15 on Disney XD.