SXSW Event Recap: Hulu’s “Solar Opposites” Creators and Cast Give Fans a Sneak Peek at Season 2 with a Table Read and Silent (And Alone) Disco

Hulu gave South by Southwest (SXSW) attendees a special treat with an hour-long Solar Opposites event to wrap up Thursday night at the virtual festival. Titled “Solar Opposites Table Read & Shlorpion Silent (and Alone) Disco,” the event began with creators Mike McMahan and Justin Roiland offering a clip from the season 2 premiere, which starts streaming March 26th. The next paragraph contains spoilers so if you don’t want any, skip to paragraph 3.

The clip showed Korvo and Terry driving Yumyulack and Jesse to summer camp, but Korvo was misdirected and ended up bringing them to a random spot in the middle of the woods. Planning to leave them there for the summer, Korvo and Terry soon realize they forgot which tree they parked by and get horribly lost. Cutting to two-months later, the Shlorpion family are worse for wear as they still struggle to find their car and get back to life on Earth as they know it. 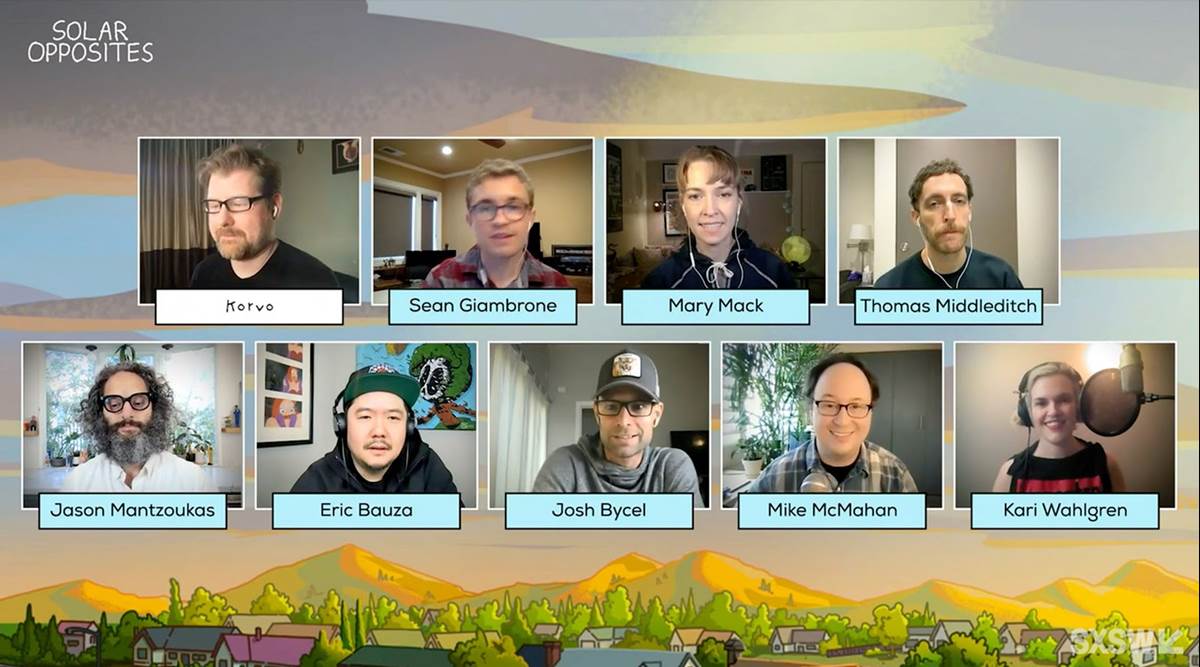 After that hilarious clip, the cast was introduced for a live table read of the script from the season 1 finale, “Retrace-Your-Step-Alizer.” The voice cast in attendance included Thomas Middleditch, Sean Giambrone, Mary Mack, Eric Bauza, Jason Mantzoukas, Kari Wahlgren plus Justin Roiland, with Mike McMahan reading the stage directions. The production quality was well produced, sometimes matching animation to their dialogue, other times showing the script like a read-along. There were some pretty hilarious flubs from the cast as well.

After the table read, Valentino Khan of Mad Decent took to the mix board to lead an 8D audio silent disco, best experienced with headphones. The animated background included characters from Solar Opposites getting distorted as he led the audience through about a half-hour of funky music. WIth headphones or surround sound, the beats floated through your ear space and made for a fun end to the day’s lineup of events.