A mysterious van appears in front of the Green’s house and lessons in sportsmanship are among the adventures taking place in Big City this weekend on Big City Greens. 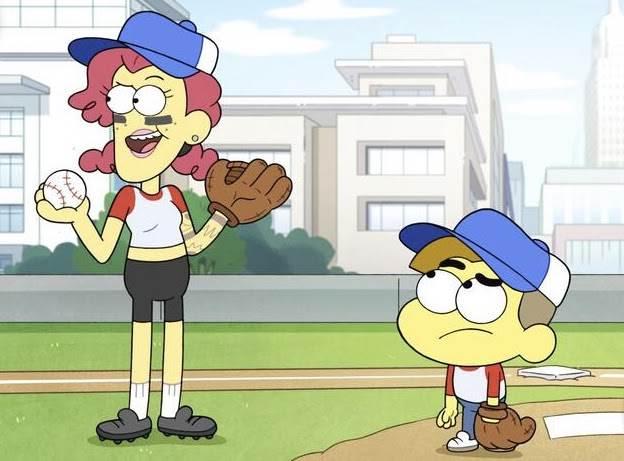 Gramma is annoyed by a van that is parked in front of her house, and Cricket agrees. What if he wants to skateboard in front of the house? The pair envision a selfish, inconsiderate slob that has left his ugly van for days. They call Officer Keys (Returning Guest Star Andy Daly) for help but there is nothing that he can do, as the van is parked legally. Gramma suggests that concerned citizens should take the matter into their own hands, but Keys says those hands will then be in handcuffs.

Cricket and Gramma, still ranting about the jerk who parked his van in front of their house, accidentally unleash the van upon the city when Cricket (not knowing what parking chocks are) kicks one out of the way and the van rolls down hill.

The owner of the van, Rick (Guest Star David Harbour (Stranger Things)), shows up again and says he’d better call the cops to help. Cricket and Gramma knock the phone out of his hands, fearing the “wrath” of Officer Keys. Rick, suspicious of why they’re helping in the first place (“It’s not like you guys have something to do with it”), is still appreciative of the help, even buying the pair personalized hot dogs.

The group eventually find the van lodged in a tree, and they break it loose where it continues to roll down hill towards the koi pond of Big City’s Little Tokyo where Tilly is feeding her favorite koi, Marcus. The van crashes into the water where Marcus (a very large koi) swallows the van and Rick bursts into tears. Thanking the two for their help, Rick explains that his wife was having their baby and he had to park in front of their house as it was the closest parking they could find. His family then shows up, and Rick says he must be resourceful, he’s a dad now and volunteers to be the van, offering his wife and new baby a ride home on his back. Gramma and Cricket then burst into tears and begged for forgiveness, explaining it was all their fault because they thought he was a jerk, when in turn, they were the jerks. The pair dive into the koi pond against Tilly’s warning and are swallowed by Marcus, and get the fish to spit out themselves and the van, as well as an unrelated human skeleton.  To quote Gramma, “It be like that sometimes.”

It’s game day in Big City, well, at least for little league, and Nancy has shown up to support her kids for their first game. Today, they’re part of Big City Sue’s Bruisers, or Sue-Zers, thanks to a no-refund policy at the local print shop. Nancy is getting into the game, excited to watch her kids win when the dark, sleek, van of the legendary team, The Elites, shows up coached by Community Sue’s rival, Community Dan (Guest Star Rob Riggle (Holey Moley)). The Elites have never lost a game, and their attitude matches their reputation, making fun of and teasing their competition while dominating the game. Nancy aks Sue to tell to Dan to “Take it down a notch” even though that goes against everything she stands for. Sue approaches Dan who then releases the children upon her, forming a “circle of shame” as the kids chant “Loser” instead of “Sue-zer,” a nickname that Community Sue practically gift wrapped for them.

Nancy decides to take matters into her own hands and dons a uniform and (somehow) passes for a kid. When Gabriella (Cricket’s Girlfriend!) asks if it's cheating, Community Sue intervenes and says The Elites took everything from her, and approves of the new ringer, pulling an angry Benny from the game with Nancy taking over.

The Sue-zers now begin to dominate while Nancy goes into beast mode (earning Gramma’s respect for once), with the team closing in on The Elite’s massive lead. As the team is set to win the game, Nancy looks around and realizes the Sue-Zers attitude is now just as bad as The Elites were. She starts using baseball speak (tugging ears, adjusting hats, etc.) to tell the team that they have become the bad sports that the other team was and now they must throw the game without making it look like they’re throwing the game.

The kids succeed in the charade until the game is tied again and the winning home run is about to be scored when Benny, still angry about being benched, is seen on the outfield wall jumping for the ball when Cricket tackles him, locking in the win for the other team.

Coach Dan, still a bad sport, makes fun of the Sue-zers for losing and tells his team they’re getting wings. The rest of the team however, is amicable and tells the other team thanks for the good game.

Community Sue enjoys the sportsmanlike conduct and says that this is only the beginning of a great season. Remy’s dad however, is still upset that it’s not football.

Big City Greens is now available on the Disney Channel and the DisneyNOW app.