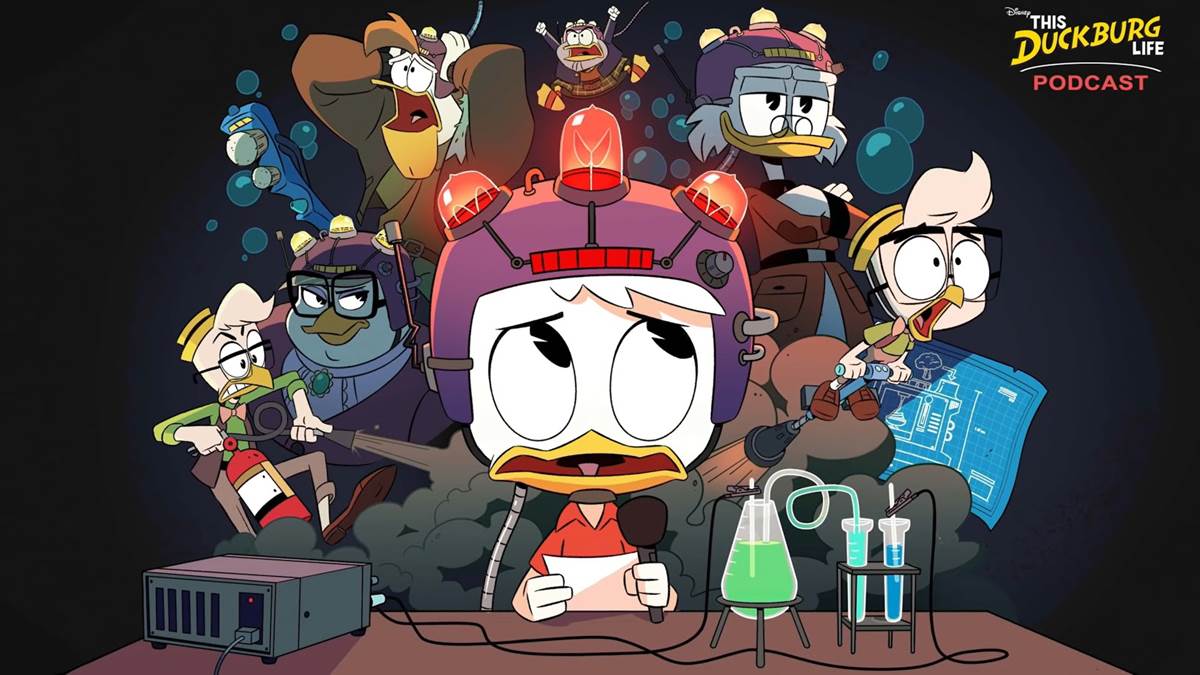 Hello and welcome to part 2 of 7 in Laughing Place’s weekly recap of the new scripted podcast This Duckburg Life, which expands upon the fictional universe established in Disney XD’s recently concluded DuckTales reboot.

The second installment of This Duckburg Life, entitled “Narratron 3000,” focuses on the character of inventor Gyro Gearloose (voiced by Jim Rash). At the beginning of the episode, our host Huey (Danny Pudi) lists his favorite Gyro inventions, including the plutonium-powered pogo stick. Then Huey arrives at Gearloose’s lab for a demonstration of the scientist’s latest breakthrough: “Behold, my newest masterpiece: the Narratron 3000!” According to Gryo, this device can read minds, and he plays audio from trial runs for Huey. Subject 1 is Mrs. Beakley (Toks Olagundoye), whose innermost thoughts are read aloud through the invention’s speaker, much to her alarm. Test Subject 2 is Launchpad McQuack (Beck Bennett), who evidently needs to remind himself to breathe in and out. A later test on Flintheart Glomgold (Keith Ferguson) reveals that the antagonistic entrepreneur secretly idolizes his rival Scrooge McDuck. Uncle Scrooge himself (David Tennant) then tries on the mind-reader, and is able to outsmart the device in order to trick Gyro about the contents of Scrooge’s money bin, but Gyro asks for more funding anyway.

During a commercial break, Huey’s brother Dewey (Ben Schwartz) promotes his new business “Lights! Camera! Dewey!”– a talent agency that only represents him. Then we return to the show as Huey duck dons the Narratron 3000 and becomes Test Subject 40. Through the speaker, his inner monologue reveals he hadn’t bathed for a while as he was busy preparing to record the podcast, which Huey of course regrets. “I didn’t need a billion-dollar device to tell me that you stink,” comments Gyro. Suddenly the Narratron gains sentience and begins narrating its own thoughts: “I’m so sick of this gig– reading people’s thoughts is a curse!” The machine renames itself “Claratron” (Kari Wahlgren) and declares that it wants to conquer the world. “Well, she lasted longer than most of my inventions,” admits Gearloose. Another “Lights! Camera! Dewey!” commercial introduces the third nephew Louie (Bobby Moynihan) as Dewey’s stunt double. 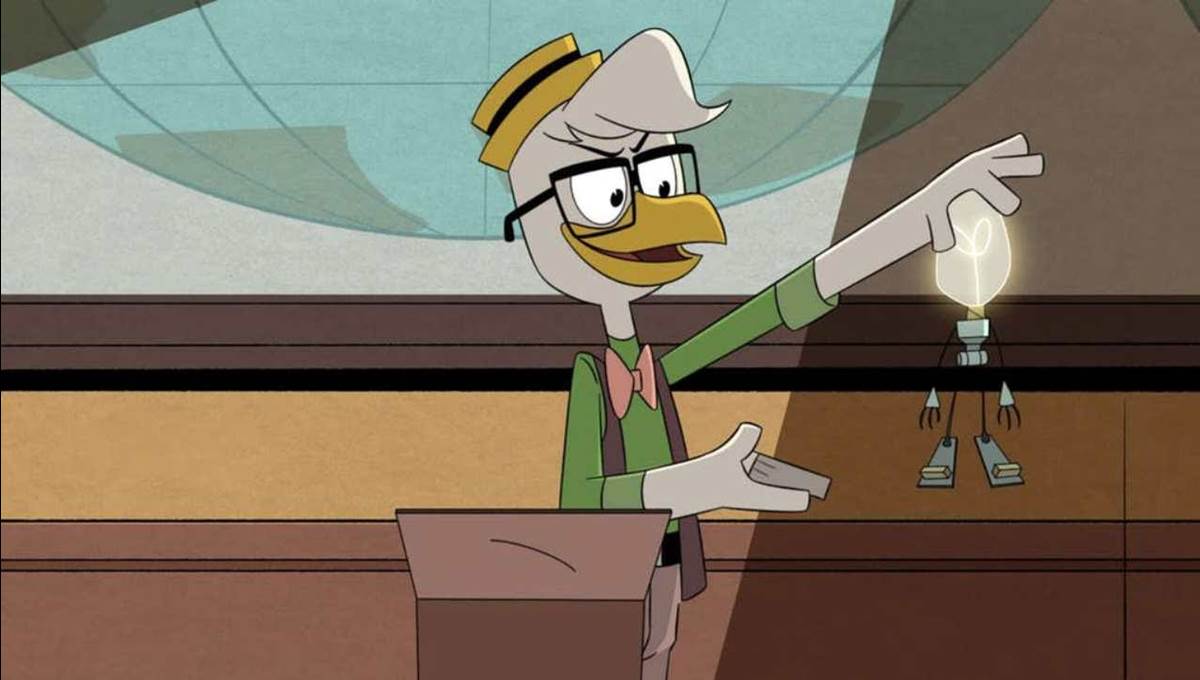 The story continues with Huey begging Gryo to get the Narratron / Claratron off of his head, though the machine is intent on melting his brain and taking over his body. Claratron makes Huey tickle his own armpits and give himself a wet willy until Gyro threatens to unplug her power cable: “For a brief moment, you were my greatest achievement.” But Huey stops Gyro, saying his brain is now connected to Claratron’s, and he can also read her mind. Apparently she wants Gyro to unplug her because the abrupt power cutoff will melt Huey’s brain. Claratron starts making Huey slap himself and then pick up a bunsen burner, setting the lab on fire. Gyro scrambles to put out the fire as Huey pleads for the inventor to stop the Narratron: “You’ll never get that raise from Scrooge if you melt his nephew’s brain!” Huey almost unplugs Claratron at her mind-controlling behest when Dr. Gearloose comes up with a solution: all Huey has to do is think of nothing and completely clear his mind. Claratron fights back, but Gyro talks him through it: “Clear your head… just pretend that you’re Launchpad.” Huey convinces himself to relax, and Claratron shuts down. “And so, I survived the Narratron. As you may have guessed, since I’m hosting this podcast.”

Huey ruminates on the lessons learned this week, and introduces his newest sponsor, to his own shock: the Narratron 4000: “Tired of keeping your thoughts to yourself? Have you always wanted to say what’s really on your mind?” In the ad, Gyro promises the new device won’t go insane or melt your brain, though he’s quickly proven wrong. At the end of the episode, Huey’s uncle Donald Duck (Tony Anselmo) is brought in to read the credits once again. 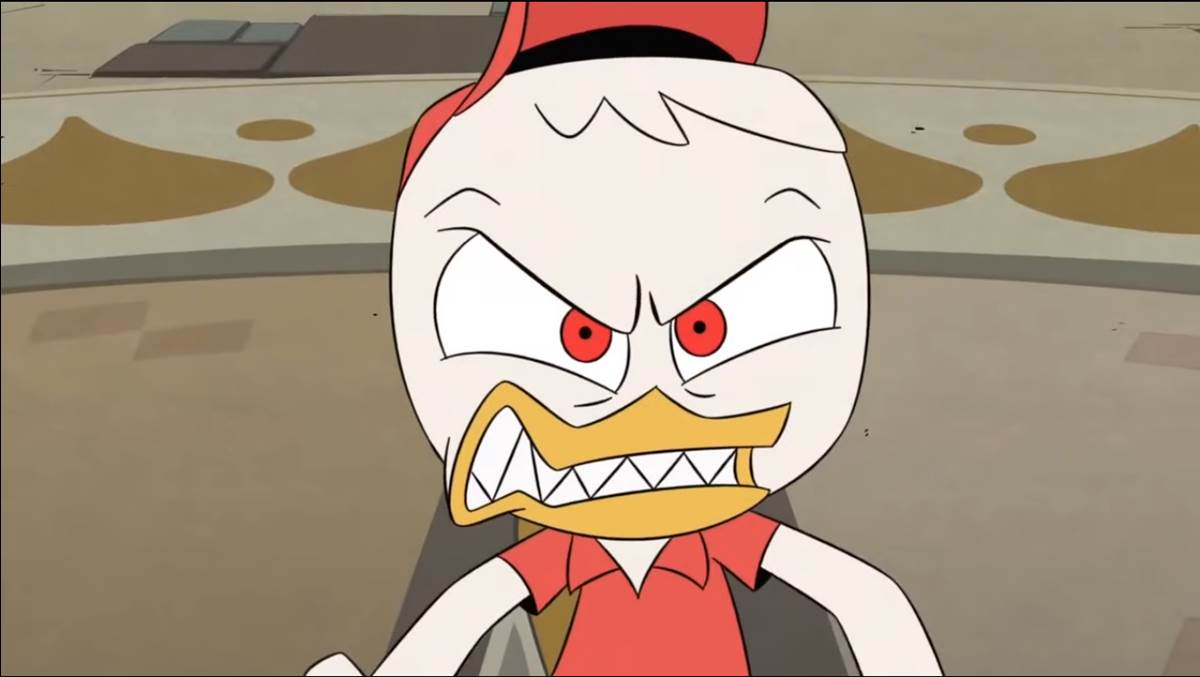