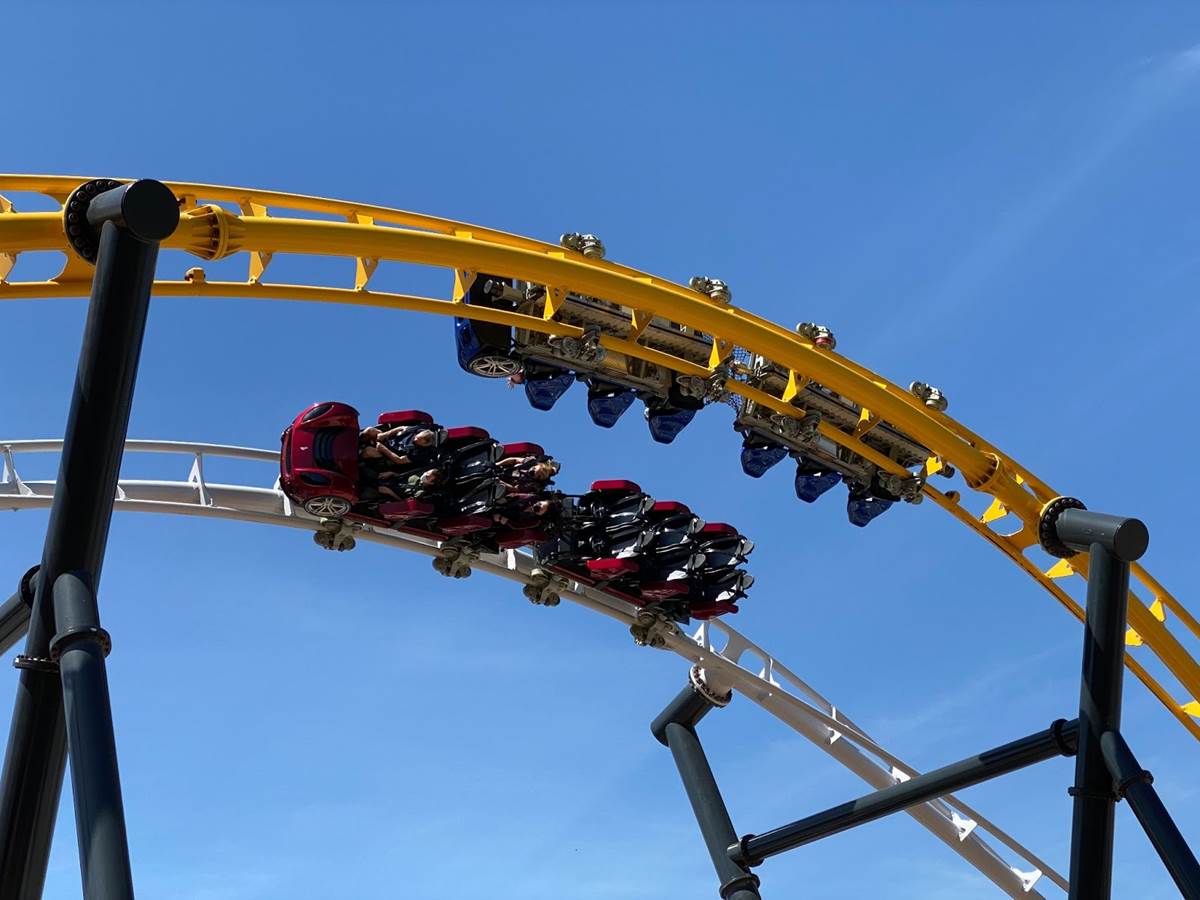 With COVID restrictions lifting in Southern California, it’s incredibly nice to be getting back into the local theme parks with actual rides operating. Our first visit in the area during this period was to Six Flags Magic Mountain in Valencia, which opened last weekend to excited guests for the first time in over a year.

I attended Six Flags Magic Mountain this Tuesday, and was very interested to get a first taste of how theme parks and amusement parks will operate during this initial wave of post-pandemic readjustment. Early in the day I live streamed a walk around most of the park on the Laughing Place YouTube channel. You can rewatch that experience below.

Upon arriving at the park, I had about a half-hour wait to get into the parking lot, but once I was actually inside I was happy just to absorb the atmosphere of Magic Mountain, which is large enough to allow crowds to spread out and never felt overly crowded that day– on the paths, at least, but more on that later.

Signs posted around Six Flags inform guests of the current safety protocols, including instructions on how to “Do the Six”– specifically wearing a mask, washing your hands, covering your cough, keeping your space, sanitizing often, and of course having fun. Another sign reminded everyone to wear their face coverings over both their nose and their mouths, and as a side note I was surprised to find that Magic Mountain now offers mobile food ordering at many of their counter service locations.

The first theme park attraction I rode in over a year turned out to be Justice League: Battle for Metropolis, which didn’t have a terribly long wait at all that morning, though the line for West Coast Racers (the newest roller coaster at Magic Mountain) grew steadily throughout the day.

At the top of the hill, I was thrilled to go on the suspended coaster Ninja (another fairly short wait), but was disappointed to find that the Helpful Honda Express funicular was not running that day. Superman: Escape from Krypton, however, was running and even louder than I remembered.

I was amused to see a Mario Kart racing game in the park’s Boardwalk area, and then I visited the DC Universe, where Batman: The Ride was not operating but Wonder Woman: Lasso of Truth was. Having not visited the park in a while, I was surprised to see that Green Lantern: First Flight’s signage and decor was still in place, though the ride itself had been removed years ago.

My last ride of the day was the opening-day mine train coaster Gold Rusher, which took a long time to get through the queue due to the procedure of only filling every third row and sanitizing the seats and restraints between each cycle. That process is extending the wait times in the park, but it feels comforting that they’re being that thorough in keeping the guests safe during this unprecedented time. Sadly Crazanity and Roaring Rapids were also unavailable during my visit.

While I’m more of a themed attraction fan than a roller coaster guy and consequently Six Flags Magic Mountain isn’t my favorite theme park in Southern California– that honor naturally goes to Disneyland– it was nice to walk around for the day and begin the process of getting used to being back in the swing of things. Six Flags Magic Mountain is now open daily in Valencia, California. For more information on the park and to purchase advance tickets for your visit, be sure to visit the official Six Flags website.