TV Recap: Booker and Levi Become Rivals in “10 Things Debate About You” on “Raven’s Home”

“10 Things Debate About You” is a rare double-vision episode of Raven’s Home. By that I mean fans get not one but two visions from Booker during the story and it also sets up a potential love interest for Nia. Here’s a recap of the latest episode, which is now streaming on DisneyNow. 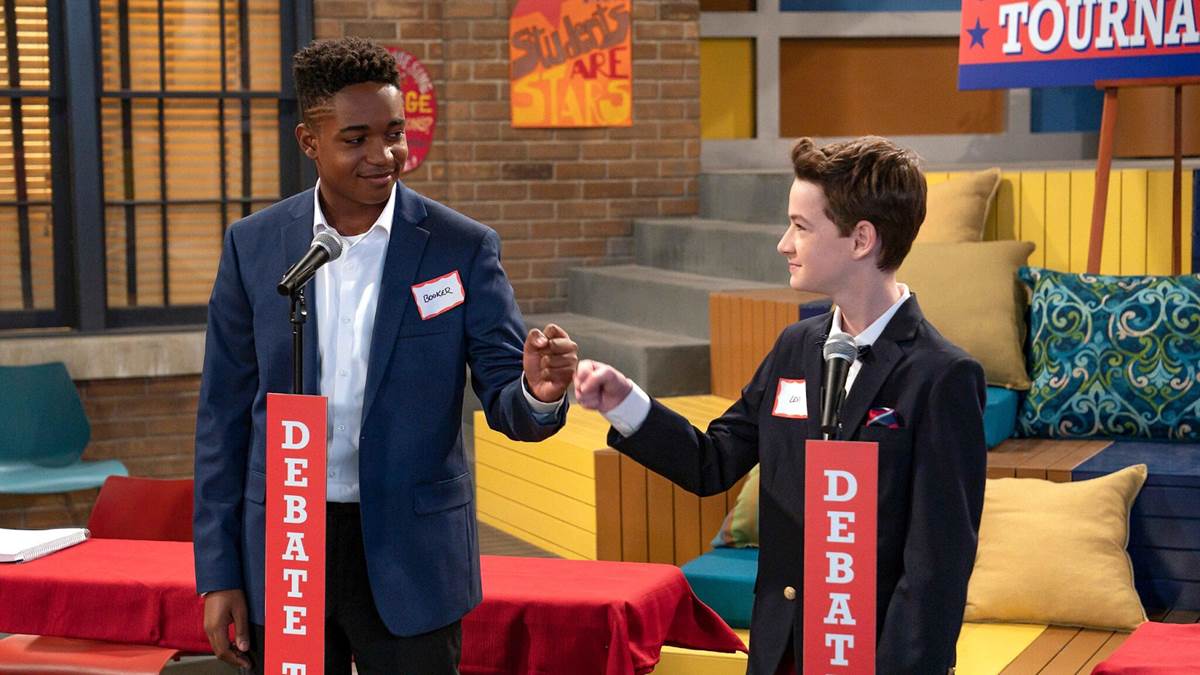 It’s breakfast time and Nia, Tess and Levi are debating between pancakes and french toast, even though Raven and Chelsea have already made pancakes. It turns out that they’re just warming up for their debate team and Nia tells Booker he should join because he’s good at arguing. Booker resists, saying he doesn’t like doing it, to which Levi says he does. They proceed to get into an argument over which breakfast meat is best, bacon or sausage. In the end, Booker agrees that he should join the debate team.

Levi’s excited to be the first middle school student to be accepted onto the high school debate team, which is led by Mr. Argo. For a practice debate, he pits Booker and Levi against each other. The topic is the “Dangers of piracy” and just before they start, Booker has a vision of Mr. Argo pointing at him and saying “Our winner, everyone.” Booker takes the pro stance and talks about sea pirates and why they’re so cool. Levi, who understood that the topic was about internet piracy, gave the con side of the argument and won. Booker looks over to see Mr. Argo pointing past him to Levi as he says “Our winner, everyone.” Booker is disappointed, saying “Awww, poops” in dismay.

At Raven and Chelsea’s office, one of their clients is named Mei, who calls both of them Chelsea and pluralizes it. Mei reveals that she just wanted to hang out with them so she booked an appointment and paid them in coffee, which upsets Raven and Chelsea who would rather spend their working time with a client who will pay them money. When Mei leaves, Raven tells Chelsea that they need to better establish a boundary between a friend and a client because it otherwise makes it hard to help them.

That night at home, Nia is using a hand mirror to practice her debate skills when Booker enters the living room upset. “There’s no shame in losing one debate,” Nia tells him, but when he finds out she’s never lost one, he’s still down. Levi enters and taunts Booker about losing to a middle schooler just as Booker has a second vision of Mr. Argo announcing him as the winner of the next debate. Encouraged by what he saw, Booker tells Levi he’s about to study more than he ever has before.

In Nia’s room, she and Tess are practicing when Nia gets notified that the big debate has been moved up to this Saturday and that she is going head-to-head with the solo debate state champion Wyatt Darcy. Tess gets a text from Ramon asking to meet him at the mall and before she leaves, she and Nia debate the pros and cons of boyfriends.

The next day, Raven comes to the office smelling like the spa and Chelsea calls her out. Mei runs in to hand Raven the essential oils she forgot to grab at their spa date and Chelsea is frustrated that Raven did something with Mei as a friend after talking about boundaries. But Mei lets it slip that she was hanging out with Chelsea just before she met Raven at the spa, so it turns out they both broke the rule already. “I can’t believe I got to hang out with both of my favorite Chelsea’s on the same day,” Mei says as she leaves.

During the debate rematch at school, Booker and Levi debate on “Video games and today’s youth” with Booker once again taking the pro side. He argues that they enhance dexterity and reaction time and wins, just like he saw in his second vision. Mr. Argo compliments Booker and Levi, saying they bring out the best in each other and pairing them as a duo for the big debate on Saturday. But with Booker and Levi still having a rivalry, they aren’t happy about it. “Aww, poops,” they both exclaim.

That night, Booker is squeezing his stress ball when Levi comes into the room. They quickly settle their rivalry when Booker gets a message from Mr. Argo telling them their topic for the big debate, which gives Booker an idea.

At their office, Raven and Chelsea break the news to Mei, who freaks out and says “I’m a bad client.” Mei reveals that she gets clingy with people, which is why she needs their counseling more than she needs them as friends. She admits that she knows Raven’s name isn’t Chelsea and as she leaves, agreeing not to spend time with them as friends anymore, she reveals that she has two tickets to “Hamilton: Behind the Fashion,” which Raven really wanted to go to.

At the big debate, Raven and Chelsea are cheering the kids on as Nia meets Wyatt, who she thinks is so cute that she needs Tess to remind her what the debate topic is. Wyatt is equally attracted to Nia. Booker and Levi’s debate is on “Arguments: Healing or Hurting” and they share their own experience as rivals to win the trophy for their team. During the celebration in the hallway, Booker notices the way Wyatt and Nia are looking at each other and suggests they take the party outside to give them some time together. Wyatt tells Nia that he wants to hang out so they can debate more. It seems that love is in the air for Nia.

That’s it for this week’s episode. Raven’s Home returns on April 16th with “Plays of Our Lives.” Here’s the description for the next episode:

When Booker has a vision of Levi being ousted from his first big stage role, he goes against Levi’s wishes and asks Chelsea for advice.