A stone that isn’t fully charged AND the beginning of a toad rebellion?? It’s not even a season finale and we get two episodes of Amphibia that leave things hanging! A few weeks ago we saw the first temple and know that Anne, Marcy, and the Plantars were able to get through and learn the way to the second temple where they will recharge the second stone so Anne and Marcy can use the Music/Calamity Box to get home.

On the way to the second temple, they encounter Valeriana, whom they first met at the Bizarre Bazaar, who asks why they are there… Perhaps to find a temple to charge an ancient stone?! Valeriana then explains that she is the last of an ancient order that studies the sacred stones and temples. Upon seeing the music box again, she goes into a trance asking to hold it, but Anne is suspicious. There’s something amuck with this lady.

Valeriana suggests they all ditch their coats and wear jackets of caterpillar wool instead as they hike up the mountain. About halfway, Valeriana does a whistle call and a giant cardinal shows up trying to eat everyone. They can’t figure out why until Marcy suggests that it’s strange since Cardinals only eat Caterpillars when Anne realizes it’s because they’re wearing the caterpillar coats and ditches hers with the giant bird chasing after it.

As they continue up the mountain, there’s a distant rumble and Valeriana says not to worry, it’s just an avalanche, and spotting the wave of snow in the distance, but far enough away to keep them safe.

Anne notices that there’s a hut directly in the path of the avalanche, and despite Valeriana’s warning, runs towards the hut to save whoever is inside. When she gets there, there is nobody present, and runs back to her own safety.

Valeriana says she’s learned all she needs to know and decides they are not worthy of the stones, and they must now find the temple on their own.

Anne has a meltdown and starts screaming at Valeriana and insulting her order when Valeriana waves her staff and takes them into a mystic arena of sorts, where she is trying to steal the box from Anne. She calls her selfish and starts listing instances (that we’ve seen in previous episodes) and eventually points out that she stole the music box. Valeriana rushes Anne and almost falls off the temple and is dangling on the edge when the rocks crumble and she almost falls to her death, but Anne risks her own life to save her.

With another fell swoop, Valeriana transforms, “cleaning up nice,” and says they’ve been waiting for someone like Anne for a long time, and reveals the whole mountain climb was a trial, the “temple” the whole time. She allows Anne to charge the stone but it takes substantially longer this time than in the previous temple.

In the distance, Anne hears her friends screaming and takes the stone before it’s fully charged, saying it looks “charged enough.” Turns out, while they were waiting for Anne, her friends were watching cute animal videos on Marcy’s phone. We see the group walking away with the stone’s power flickering. 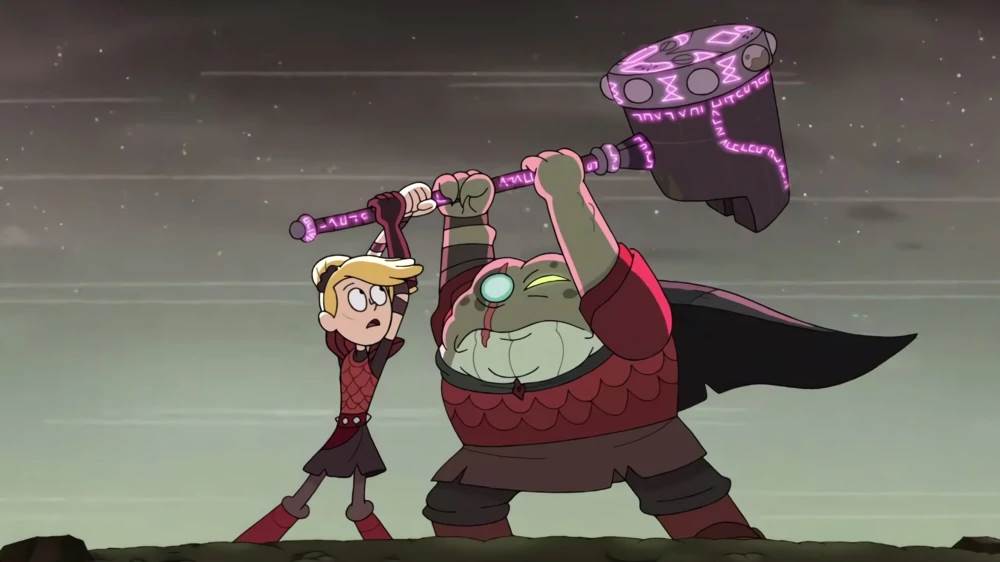 We jump into this episode in the middle of a toad council meeting, where Grime is explaining that he wants to start a rebellion (along with Sasha) so that Toads could become the true rulers of Amphibia. Sasha learns during this meeting that King Andrias is working with other hummus (humans), meaning that they must be working with Anne and Marcy, who in turn are working together without Sasha.

When the toad guards try to take Sasha, Grime, Braddock and Percy away, Sasha erupts demanding to know what they must do to prove that they could lead the rebellion. Aldo awakens and suggests that if they can retrieve Barrel’s Warhammer, they can lead the rebellion, while everyone else in the council agrees, they also are aware that this is a suicide mission. Sasha, who blindly agrees to the venture, finally asks what Barrel’s Warhammer is and Percy and Braddock explain that Barrel's Warhammer is said to be an ancient weapon that was used by the legendary Barrel the Brave and is guarded by the beast Barrel defeated himself. Clearly worried about the whole situation, Percy and Braddock don’t want to continue on the mission, but Sasha suggests that if they get too scared, they do a “Kawaii Pose” as a signal and they’ll turn around and go home.

The two feel better, and Sasha reiterates, if you get scared, strike a pose, and they’ll leave.

The find the Warhammer pretty easily based on the map, and with no beast in sight. Could it be that easy?

As they try and pull the warhammer out of the ground, the beast awakens, and its not just any beast, and its leviathan of a narwhal worm. Percy and Braddock strike a pose immediately, and Sasha says “no we can’t leave. We’ve come too far.”

Despite their best efforts, the warhammer isn’t budging, and Sasha tries to wrangle the beast and steer him toward the tower, that way the warhammer returns. Grime loves the idea, and goes along with the plan. Percy and Braddock are holding on for dear life begging Sasha to stop this, to which she ignores them saying “We’re almost there.”

Trying to avoid a disastrous impact with the tower, Sasha realizes she can’t control the beast anymore, and they must use the warhammer. She goes back to the weapon, and uses all her rage thinking that Anne and Marcy can get by without her and retrieves the warhammer.

The weapon is too heavy, and Grime helps Sasha lift it into the sky when it becomes charged and they slam it down into the beast.

The narwhal worm shatters some glass, and Sasha is standing in the window saying “One warhammer. As promised.”

The toad council grants the support of all three towers for their rebellion.

Percy and Braddock, clearly hurt by the whole thing, say they can’t be with Sasha anymore and that they trusted her but clearly didn’t care one bit about them. Despite her pleas, Sasha and Braddock leave. Grime explains that everyone has limits, and they hit theirs. Sasha doesn’t want to accept this, but eventually does, and leaves with Grime, and now we know that a toad rebellion is about to begin.