Over 20 years after its initial release, Disney’s animated adaptation of Mulan is still inspiring audiences around the world. To celebrate the film’s legacy, Co-Director Tony Bancroft and his twin brother, animator Tom Bancroft, joined the Walt Disney Family Museum for a virtual walk down memory lane, sharing stories about making the film. Here is a recap of “Reflections on Mulan.” 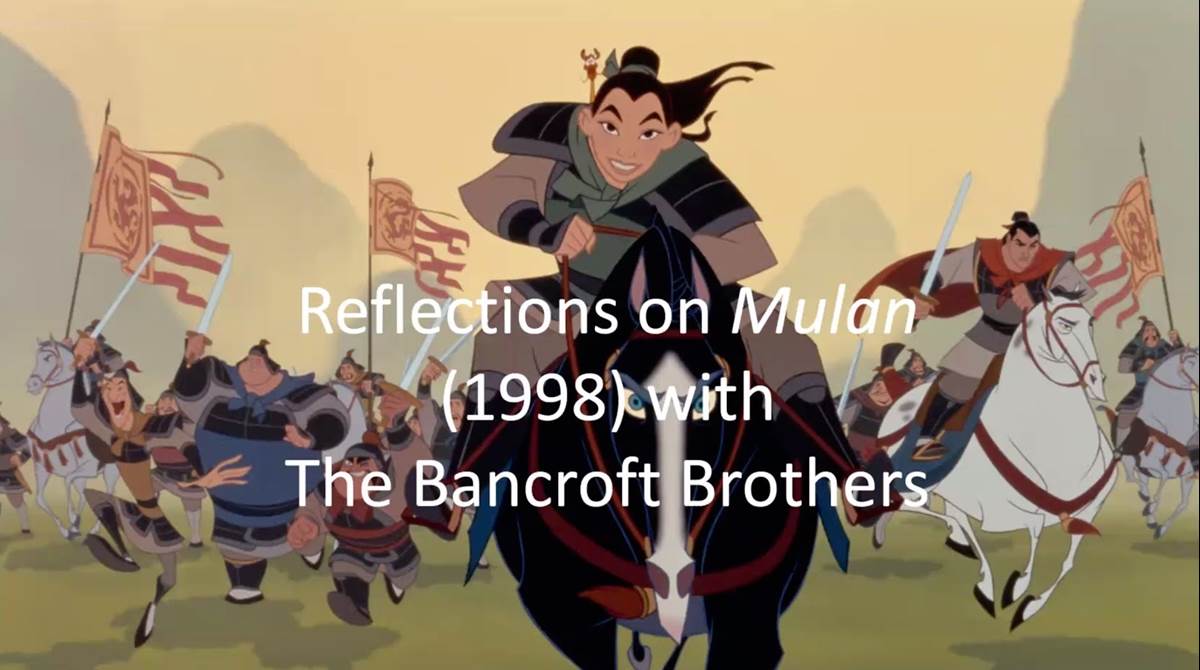 Starting their Disney Animation careers at the Florida studio in May of 1989, the brothers were fresh out of CalArts at the age of 21. “The Florida animation studio was a really special place,” Tom recalled, sharing that when they first started, the studio was only meant to make shorts. “It was a great time to be there. Many of the staff were brand new and pretty young.” One of the few exceptions was Mark Henn, who was Tom’s mentor. With the demand for Disney animated features quickly increasing following the success of The Little Mermaid, the brothers soon found themselves working on their first feature film, The Rescuers Down Under.

It was The Lion King that really paved the way for Mulan, a film so successful that Jeffrey Katzenberg decided to double the number of animated features produced. That’s how the Florida studio, originally meant to just make shorts as Guests at Walt Disney World peeked in ended up getting the greenlight for its first animated feature made entirely in Florida. “All of a sudden we were in the feature game doing our very first feature.” With a studio of mostly green talent, there was a tremendous thirst to prove themselves.

Work on Mulan was actually started before Tony Bancroft became Co-Director with Barry Cook, with a group having already taken a research trip to China. “We really tried to strive for something that was a blending of what Disney was but also what Chinese artwork is to the rest of the world,” Tony shared. Working with a story that was thousands of years old, the Chinese art influences primarily came from the Tang Dynasty, with Production Designer Hans Bacher blending watercolor, woodblock and calligraphy designs from the era with Disney’s universal style.

One of the main trends that emerged from the Chinese art styles that Tony wanted to include in the film was a concept of positive and negative space in a lot of the art. German-born artist Hans Bacher may seem like an unlikely choice to lead the production design, but with a background in graphic novels and comics, he understood these fundamentals well. “We started to realize that we were on to something,” Tony shared after showing a few examples of concept art that went in the wrong direction, including an attempt to depict China in an Eyvind Earle style.

Tony Bancroft talked about the way the story evolved over the course of the project, including two deleted characters: General Wu and Bao Gung, the latter being a second villain that proved to be unnecessary to the story. He also revealed an animation cheat with Mulan’s two forms, sharing that the shape of her eyes, lips and jaw are different when she’s disguised as a man. It’s the kind of cheat that would only work in hand-drawn animation and would have been very noticable had it been computer animated.

Tom Bancroft served as the lead animator on Mushu, his first time leading a character and a role he had to prove himself worthy of, even though his brother was a director. He actually went overboard during the design process, making his own color models. One of his wishes was for Mushu to have purple in his design, a color that Hans Bacher wasn’t a fan of. But Tony revealed that they snuck a tiny bit of purple on to Mushu in a scene where he’s on the back of Khan. Keen eyed fans may notice that in that one scene, the tuft of hair at the end of Mushu’s tail is purple. “I don’t think one person has ever come up to me and said why does Mushu have a purple tail in that once scene,” Tony laughed.

Speaking of Mushu, the character was originally inspired by the success of Timon and Pumbaa in The Lion King and the directors envisioned him as another New Yorker, considering Joe Peschi for the role. They even produced an animation demo of the character set to dialogue from one of Peschi’s films. It was Michael Eisner who suggested Eddie Murphy for the role, telling the directors that Murphy owed him a favor from his time at Paramount where Eisner produced Beverly Hills Cop, one of the comedien’s first major film roles. All of Eddie Murphy’s dialogue was recorded from his home in New Jersey, which had a basement recording studio. Because the dialogue was written with Eddie Murphy in mind, he didn’t need to do much improvisation.

Ming-Na Wen was the only actress considered for the part of Mulan, with the directors already fans of hers after seeing The Joy Luck Club, which came out around the same time they were casting the voice roles. In fact, the entire cast of The Joy Luck Club were auditioned for Mulan because there weren’t a lot of Chinese-American actors with “Marquee value” at the time. “We had to kind of put that aside very quickly,” Tony shared. During one of Ming-Na’s recording sessions, the actress asked the directors if she could be the singing voice of Mulan. Lea Salonga had already been cast as the singing voice, having previously sung for Jasmine in Aladdin, and while the directors agreed that Ming-Na had a great singing voice, it was too late. “She couldn’t deny that Lea Selonga was a phenomenal talent.” She has maintained a relationship with the Bancroft brothers in the years since, narrating a documentary film Tom produced called Pencil Test.

Over twenty years later, the impact of Mulan is undeniable, with a big budget live-action remake from Disney. The story has stayed with the brothers even as they’ve move away from Disney, with Tony showing photos he took on a pre-pandemic trip to Wuhan where there’s a temple devoted to Mulan in addition to a grave and the ruins of a house believed to have belonged to her family. He added that most provinces in China also claim to be the birthplace of Mulan, a legend that is of great cultural significance as one of the only ones in China with a female hero. The film continues to delight and inspire audiences all over the world and has become a classic in the canon of incredible Disney animated films.