With Earth Day just around the corner, Overheard at National Geographic published a bonus podcast episode today that takes a literal dive behind the scenes of the Disney+ original series, Secrets of the Whales. In the new episode, titled “The Secret Culture of Killer Whales,” ocean explorer Brian Skerry shares some behind the scenes stories about his three years working on the project, specifically related to the premiere episode about orcas. 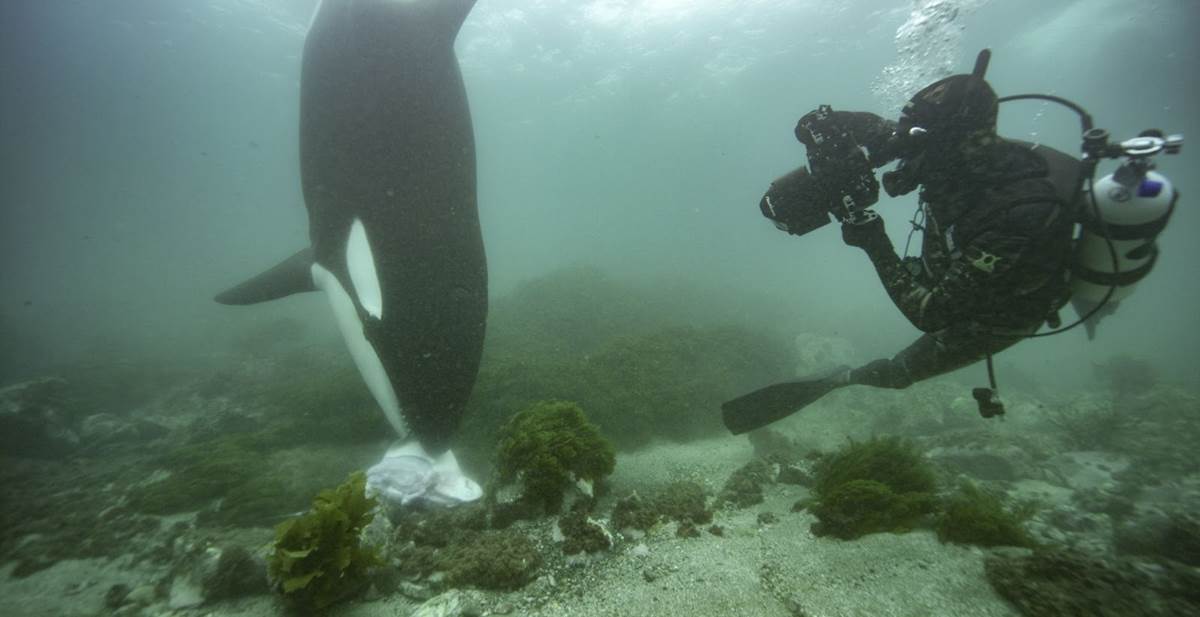 Brian Skerry explains that orcas are “Arguably the most intelligent animal in the ocean” as he talks about the rare opportunity to swim close to them in the wild. His anecdotes include visits from two locations, Norway and New Zealand. Throughout his time working with them, it’s become clear to Brian that they have their own unique personalities, family dynamics, and regional cultures.

Like humans around the world, pods of orcas prefer different foods. “The orca in Patagonia have a taste for sea lion pups, and only a couple of families of orca in the world that live in that area have figured out how to come up on a beach and eat those little sea lions,” he shared, before talking about an unforgettable experience in New Zealand where orcas have a taste for stingray. They’ve figured out how to induce tonic immobility by flipping stingray upside down, forcing them to go to sleep so they’re easier to eat. While under water, Brian believes an orca even tried to offer him a stingray, with orcas sharing food amongst their pod. She laid it down on the sand and swam back and look from him to the dead stingray several times before giving up and going back to grab it.

Brian tried as much as possible to do his underwater work free diving as orcas are sound-oriented animals and the noise of scuba gear makes it harder to get close to them. But while trying to capture orcas in Norway working herring into bait balls, using teamwork to stun and prey on them, he found that he couldn’t get deep enough. He returned to his boat for his scuba gear and with the orca now more aware of his presence, he found that they didn’t mind him being there, but they made sure to let him know these fish belonged to them. “The minute I got down there, it was like being scanned by a supercomputer,” he says in the episode. “They just came up, and I felt that they were reading everything about me. They knew what I had for dinner last night.” Also in Norway, on Thanksgiving day in the states, he observed what looks like an underwater funeral procession, a phenomenon observed in several species of whale and one that scientists debate the meaning of. “It was most likely the mother, her calf had died and she had it draped over the front part of her head, and she was swimming with this dead calf through the water.” Following the mother was the rest of the pod, swimming slowly.

The message of Secrets of the Whales is that these amazing giants of the sea are intelligent and have their own unique cultures and customs depending on where in the world they live. But seeing this dead calf prompted host Peter Gwin to share a few facts about how climate change has impacted whales, with an estimated 50,000 orcas left in the oceans, considered endangered in some areas where they used to thrive. Overfishing, habitat destruction, diseases from commercial fish farms, and chemical pollutants (including microplastics) are some of the main challenges orcas and other ocean animals face.

Throughout the episode, Brian Skerry also shares a few personal stories, such as diving in quarries in his early years and bringing up abandoned car parts for cash and a time where he was almost lost at sea, rescued by a tourist boat and feeling like James Bond. You can see his work this Earth Day in Secrets of the Whales on Disney+ and also check out his cover story in the May issue of National Geographic magazine.