The Third Temple Awaits In the Latest Episode of “Amphibia”

This week’s Amphibia takes us on a wacky adventure preparing for the third and final temple, and a highly suspicious journey through the temple when they finally get there. 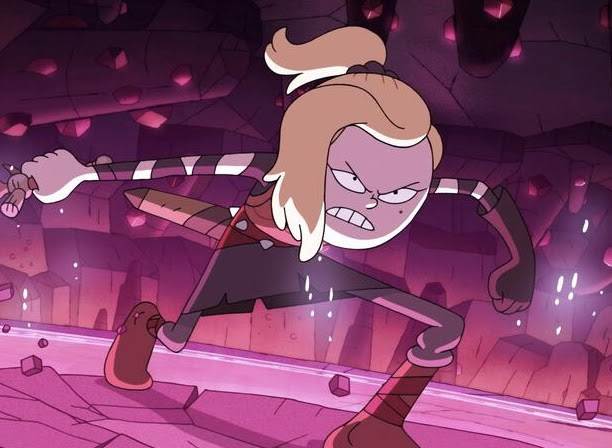 Anne, Marcy, and the Plantars are getting ready for the Third Temple. Knowing the different challenges the previous two temples have shown, they are loading their wagon full of necessities, including maps and (to Polly’s delight) weapons from their secret armory. While the family is preparing, Hop Pop assigns his old girl Bessie the snail to watch their new young snail they got in Newtopia, MicroAngelo and make sure he stays out of trouble while learning the ropes.

At the same time, Marcy suggests to Anne that she needs a new look, prompting flashbacks to the past where Marcy and Sasha have attempted to give Anne a makeover. Not to worry though. Marcy has hired the best armorer around and he is on his way.

Bessie is watching over MicroAngelo who keeps finding himself in trouble. For snails, he (and Bessie, actually) can move very quickly, and he finds himself about to fall into a well, almost crushed by Frobo, and even almost run over by local traffic (the armorer that Marcy summoned). Even though he is constantly finding trouble, MicroAngelo and Bessie are forming a bond.

Bernardo the armorer shows up and starts going through new outfits while Marcy goes to make some new potions that they might need for the next temple. Anne decides to at least try on some new outfits to help her live out the fantasy for a little while since they are so close to going home.

MicroAngelo finds himself in more trouble, and Bessie chases him down, plowing through the farm and knocking over all the preparations for their journey, prompting a scolding from Hop Pop and eventually getting locked in the barn. MicroAngelo sees this from afar and feels sorry for Bessie as he heads home.

Through a series of events involving new outfits, potions, and Polly’s weapons prep, A small fire has broken out that is about to engulf Hop Pop’s maps and maybe even the cart they are going to take on their journey. Though Bessie is restrained, MicroAngelo does his best to get her to help put out the fire and Bessie even breaks free to save the day.

As Anne takes off levels of armor, she finds a minimalist look that even the armorer approves of and decides to go with that as they brave the next temple.

This episode opens with Anne and Marcy as kids on a playground pretending to fly when they are bullied by some older girls when a new friend shows up out of nowhere to help the bullies go away. After she defends them, Anne asks her to swing with them and she introduces herself as Sasha Waybright (who we know is one of their best “friends” now).

Anne, Marcy, and the Plantars show up at the third temple, which has a message above the entryway sealed off by a heavy rock door: Lift to enter, bruh.

They realize that this temple is all about strength. The temple is also full of bubbling lava and as such is very hot, dehydrating the amphibian Plantar family. The next challenge the temple poses is getting a cross a narrow walkway while giant worm creatures come out of the lava. Equipped with heavy hammers, they must defend themselves while they go across. As a worm is about to attack, a worm splits open and Sasha is revealed to be behind it. Marcy is very excited to see her old friend, but Anne is concerned.

Sasha says the only reason they stalked them into the temple was to tell Anne that she was sorry for everything that went down at Toad Tower and that it was all her fault and wrong of her to put her frog friends in danger and for pushing her around and bullying her.

Hop Pop is skeptical, and Sasha explains that she and Grime had to go into hiding and lost everything after the toad tower incident. Devotees will remember last week’s episode where Sasha and Grime succeeded in the beginnings of a Toad Rebellion, so if you’re a frequent viewer, you already know something is up.

Anne and the Plantars are still skeptical as they journey through the temple to the next challenge, which is literally just an ancient weight bench with the challenge “Sup Brosef, Do you even lift?” To which Sasha performs the exercise, and a door opens. Anne states what most viewers are thinking “Are they even trying anymore?”
The group enters the next chamber which has a giant creature that can increase the gravity in the room, and all the amphibians are too weak to try and get closer, and Marcy’s outfit is too heavy. Sasha and Anne get closer and closer to the creature, talking through their problems along the way, when Anne gives the motivational speech Sasha needs, and says she still trusts her despite all that has happened. Sasha destroys the creature, and Anne lets her charge the third and final stone so they can all make it back home.

Marcy stops them from opening the box and suggests they take it back to King Andrias so they can use it correctly.

As they leave, Sasha tells Anne thank you for believing in her, and Grime makes sure that Sasha hasn’t forgotten the plan to use her friends as a way to get back into Newtopia. Sasha says they bought her act hook line and sinker, but also shows hesitation on her face knowing what will happen in the future.

The latest episode of Amphibia is now available on the Disney Channel and the DisneyNOW App.