An uncomfortable dinner literally explodes into a delicious finale, and a stress relieving battle of the bands takes place in Wartwood in this week’s episode of Amphibia. 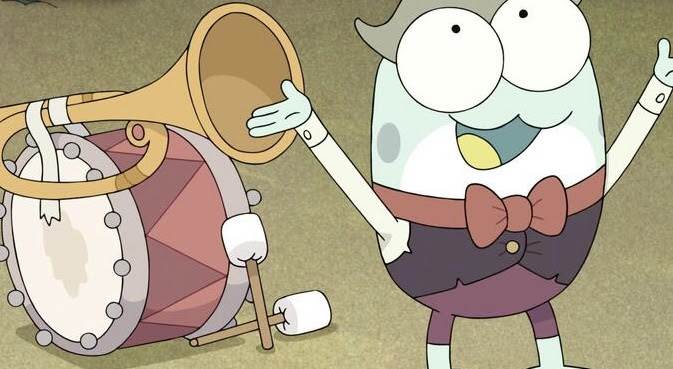 When we last saw Anne, Marcy, and the Plantars, they were in the third temple when Sasha rejoined the team with her ally, Grime. Although it seemed Sasha had changed for the better, the end of the episode reminded us that in fact, she hadn’t, and needed to put on the ruse to begin the toad rebellion.

This episode takes off with the Plantars setting up a nice dinner to welcome Sasha back (along with Grime), but are still hesitant because you know, she tried killing them earlier in the series. Anne insists that Sasha has changed, but we then cut to Grime reminding her that she must play nice in order for their plan to work.

They arrive for dinner and Grime has brought a devastatingly delicious dessert, an exploding chocolate vol-cake-no, which will result in a cataclysmic explosion of chocolatey goodness.

Over dinner, there are a few Amphibia cultural faux pas, with Grime asking what frogs the Plantars (who are frogs themselves) extort for their delicious produce, and Hop Pop’s toad-based jokes.

As the human girls reminisce, with some memories being more fond than others, Hop Pop suggests the group play a rousing game of Drawsidoodle, which looks a lot like the more commonly known Pictionary. While playing, we see Grime and Hop Pop (possibly sincerely?) getting along rather well, while Sasha buckles under the pressure of seeing how well Marcy and Anne were getting on without her presence. When it’s her turn to draw, we get a rapid-fire succession of memories about the fall of Toad Tower, each hitting nerves with Sasha and even Grime, but it turns out that her drawing was of a simple tree.

As the situation explodes, so does the dessert that was rising throughout the episode. The Vol-cake-no explodes in a hot chocolate lava cake of epic proportions, and Hop Pop says that this was Grime’s plan all along. But it wasn’t. Grime says that this a toad favorite where every feast ends in a delicious dessert battle, and not to worry, it’s delicious. As long as you survive the hornets. Chocolate covered hornets burst out of the cake that have a tough chocolate shell that only their own stingers can penetrate. The girls must work together, as a team, to take out the hornets that each fall into the chocolava and solidify into an edible treat.

Grime awakes after having been stung by a hornet, and he introduces them all to the Toad favorite dessert, which Hop Pop even says is the best thing he has ever eaten. 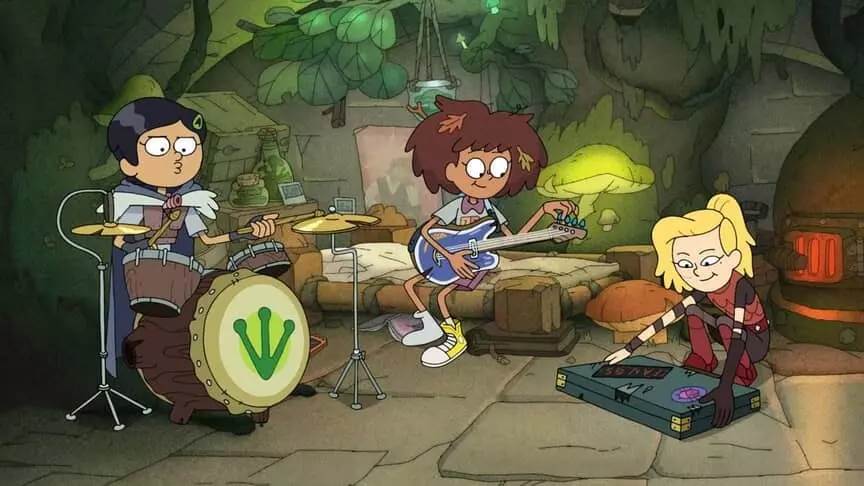 Battle of the Bands

Wartwood has been on edge since Sasha and Grime have returned since, you know, they invaded the town that one time. So Mayor Toadstool has consulted the wheel of fun to come up with an activity to help relieve some tension.

The result? A Battle of the Bands!

Immediately, Anne, Marcy, and Sasha want to reunite their former garage band, Sasha and the Sharps.

Sprig and Hop Pop join a jug band being formed, and Sasha makes sure that Grime will be okay on his own, where he issues a sinister sounding promise that all will tremble at his performance.

Toady approaches Mayor Toadstool about their act, and is rebuffed with the mayor saying that he just bought himself a 12 hour nap.

Back at the Plantars, the girls are trying to figure out what to play for the contest, with Sasha suggesting her song “Heartstomper,” while Anne suggests a new song she wrote about her experience in Amphibia, “No Big Deal,” which even has a guitar solo for Sasha.

Anne teaches them the song, but Sasha has a few notes and changes the entire song, even giving critiques to Frobo and Polly who are there mostly to provide stage effects for their performance. When Anne says that she is taking over the whole thing, Sasha leaves the group but promises to still root for them as they try and get her to stay.

Sasha goes to find Grime and discovers him locked alone in a dark room and invites him to play with her. Grime insists that he is a solo act, and despite it not being a “real” battle, he is in it to win it and slams the door in Sasha’s face.

Out in the town, Sasha is trying to find someone to join her act and comes across a dejected Toady, who is looking for someone to play music with that will also boss him around. Sasha immediately jumps on the opportunity.

After their performance, Sasha realizes that Toady has no opinions for himself, but points out that sometimes it's more fun to support someone who you really care about than to take control. Foreshadowing, perhaps?

We then head over to the Wartwood Battle of the Bands, where Anne and Marcy are ready to take the stage. Sasha wishes them well, while Toady asks if they should be worried that they’ll win. She says it's okay, but would have been better if they listened to her, and that she only wants them to succeed. Toady, still full of wisdom, says that sometimes being a good friend just means being there when they need it the most.

The duo hits the stage and performs their song, and Sasha watches from backstage. Mayor Toadstool, who is acting as judge for the contest, says that the song is very charming, “but there had better be a very cool guitar solo about to drop.” On cue, Sasha comes out from backstage to perform the guitar solo that Anne put in the song for her, reuniting Sasha and the Sharps. The song builds into a final verse, but there is still one more contestant.

Grime takes the stage with a maniacal laugh and what appears to be some kind of military ploy, but is just a big case for his instrument, an elegant harp. He calmly introduces his piece that he says is dedicated to the serenity of nature, and plays a calm, tranquil tune that allegedly lasts three hours and leaves the audience in tears, winning the Wartwood Battle of the Bands.

The town gathers around for an announcement from the mayor, that the girls will be leaving town soon. As we have learned in the episodes over the last few weeks, they have charged all the stones in the music box and are heading to the King in Newtopia so he can send them home. But before they go, Anne wants one last group photo on her phone.

Fans of the music in this episode should also know that yesterday, Walt Disney Records released a Digital EP of four tracks from the Wartwood Battle of the Bands and are available now.

This week’s episode of Amphibia is now available on Disney Channel and the DisneyNOW app.