Casual Star Wars fans who have only seen the movies might assume that bounty hunter Boba Fett traveled straight to Tatooine to deliver the carbonite-frozen Han Solo to Jabba the Hutt after acquiring the smuggler on Bespin’s Cloud City. But that turned out not to be true in the previous “Legends” continuity (see Lucasfilm’s 1996 multimedia initiative Star Wars: Shadows of the Empire) and it’s also not the case in the current canon.

Star Wars: War of the Bounty Hunters, much like Shadows of the Empire before it, is an effort to fill in the gaps about what happens to Fett and that famous-faced carbonite block in-between the events of The Empire Strikes Back and Return of the Jedi, but this time the story is to be told entirely in comic book form. The crossover event will jump between Marvel’s four Star Wars series set in this period– namely Darth Vader, Doctor Aphra, Bounty Hunters, and the main Star Wars title– and bound together with a five-issue miniseries starring the most famous Mandalorian-armored hunter of them all, plus a few one-shot tie-ins featuring the mighty Jabba and other representatives of the galaxy’s scum and villainy. 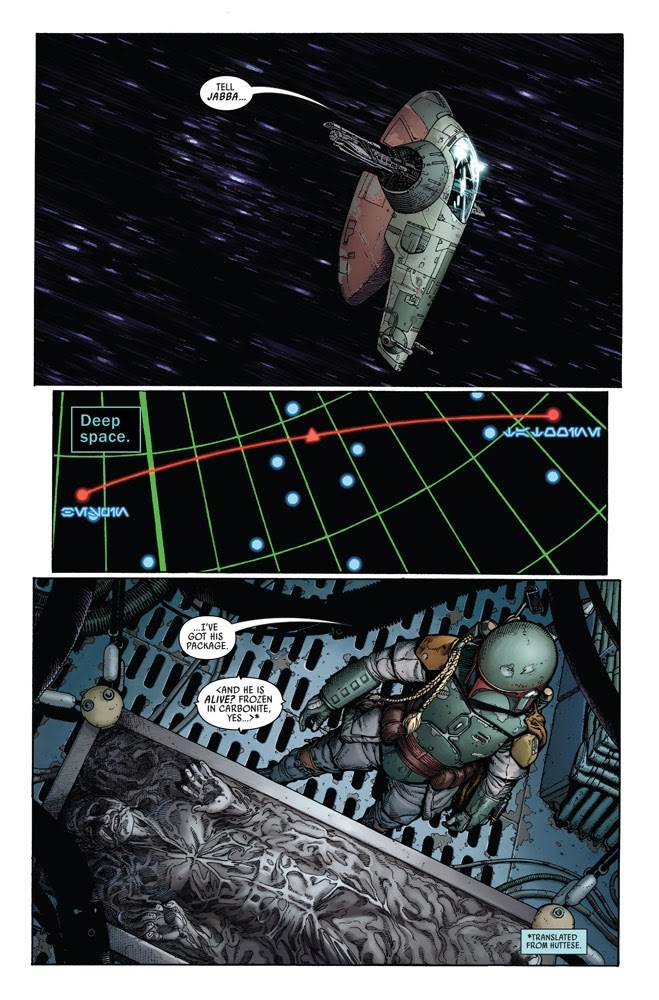 But kicking it all off is this week’s Star Wars: War of the Bounty Hunters Alpha, written by Charles Soule (Star Wars: The Rise of Kylo Ren) and illustrated by Steve McNiven (Marvel’s Civil War). As noted in an introduction to the crossover by editors Mark Paniccia and Tom Groneman, “Alpha” serves as a sort of issue #0 for the miniseries, and as readers will find, it opens with Boba Fett indeed on his way to deliver Han Solo to Jabba the Hutt. He’s on a call with Jabba’s majordomo Bib Fortuna, who reminds the bounty hunter that the Hutt wants his prize handed over alive. Unfortunately for Fett, Solo’s carbonite prison seems to be malfunctioning, with the Rebel Alliance officer dying inside.

This kicks off something of a video game-esque side quest for Boba Fett, who makes a pit stop on the smuggler’s moon of Nar Shadda, where a tech-savvy Besalisk friend named Doc Ragon agrees to help stabilize Solo– for a price, of course. Fett must enter into an underground arena fighting championship and eliminate a competitor who once cost Ragon a bundle of credits, and that arena ends up being where the bulk of this issue’s action is set. But naturally Fett doesn’t want to tarnish his armor’s reputation, so he applies some temporary black paint and calls himself by his father’s first name to enter the contest– I couldn’t help but wonder how quickly we’ll get an all-black Boba Fett action figure inspired by this story, a conclusion another Marvel artists must have come to as well, considering one of this issue’s variant covers. 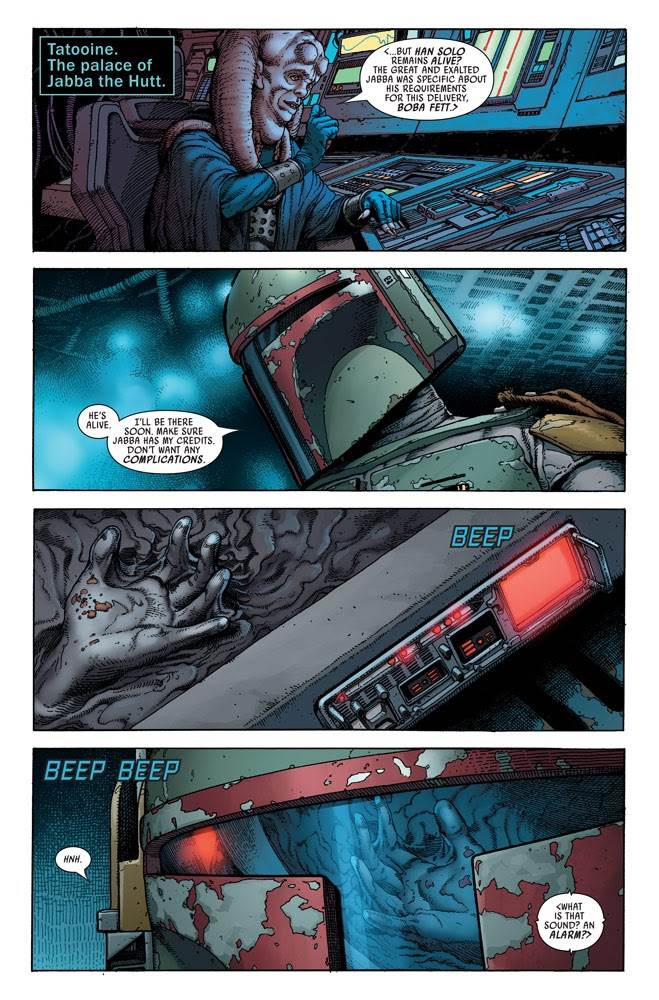 We all know how good of a fighter Boba Fett is based on his multi-episode appearance in The Mandalorian’s second season, so it’s no surprise to see him mopping the floor with the other entrants in the competition. What does count as a twist is that while he’s off completing this somewhat arduous task, a shadowy figure takes out Doc Ragon and makes off with Captain Solo, thereby establishing the inciting incident of War of the Bounty Hunters as a concept. While the area battles in this issue were fun enough and McNiven’s art is extremely detailed and attractive, I kind of wish Soule had found a better, less simplistic excuse to separate Fett from that carbonite block. On the other hand, with more than 30 crossover issues remaining to be released in this ambitious event, I can imagine things are going to get pretty complex fairly quickly, so maybe it’s smart move to start things off in the most straightforward way possible.

Between Star Wars: War of the Bounty Hunters and The Book of Boba Fett live-action series coming to Disney+ this winter, it’s going to be a big year for this franchise’s most iconic bounty hunter. Does it matter to this miniseries that we already know he makes it to Jabba’s Palace safe and sound and manages to survive long enough to see Luke Skywalker kill the Hutt’s pet rancor– not to mention blast his way out of the sarlacc pit and hang out with Din Djarin five years later? I don’t think so, because these comics are really just about fleshing out the Star Wars universe and chronology between movies, and in that regard I almost always find them to be at least moderately successful. As Paniccia and Groneman say in their intro, the bounty hunters received a very limited amount of screen time in the original trilogy for what ended up being such fan-favorite characters, so I tend to be in favor of exploring their perilous misadventures in as many ways as possible. 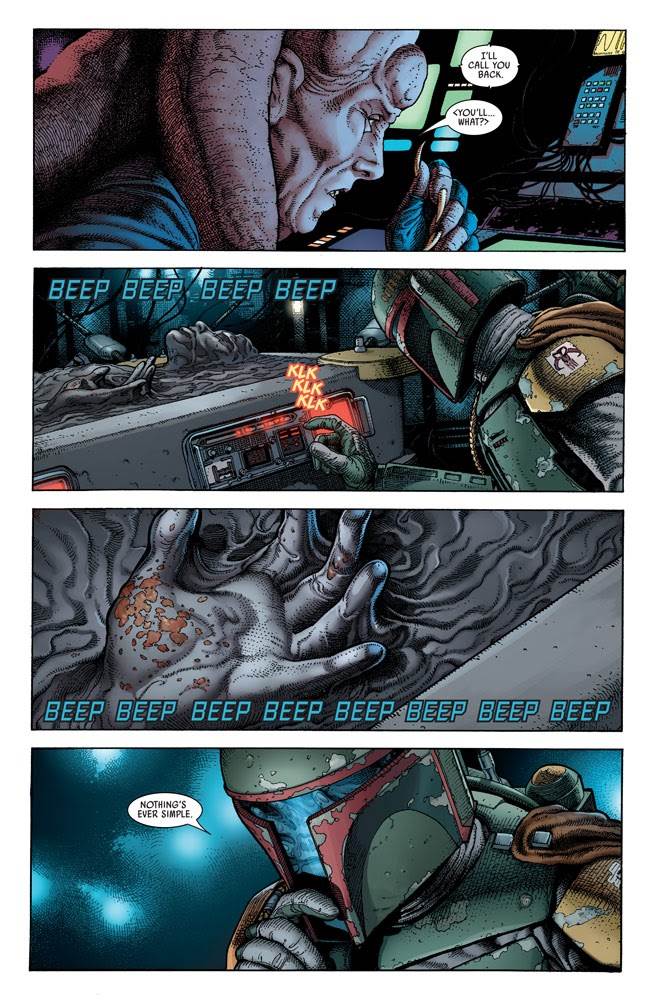 Star Wars: War of the Bounty Hunters Alpha is available now wherever comic books are sold.