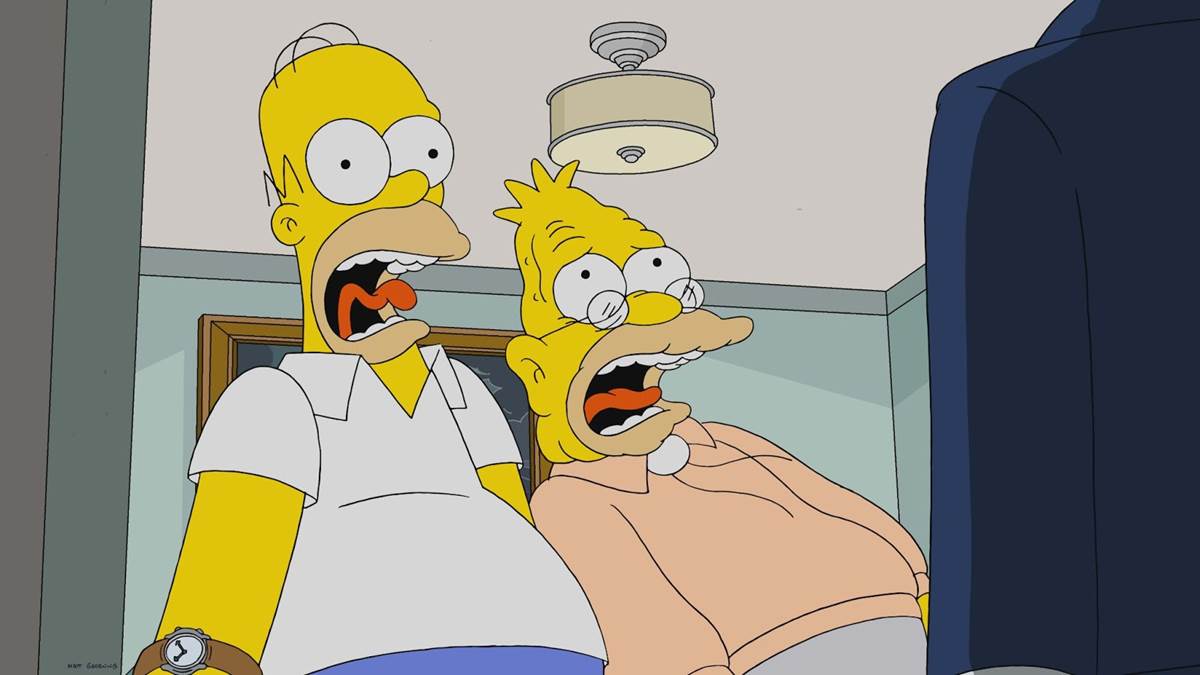 Hello and welcome to Laughing Place’s regular recap of new episodes of The Simpsons on the FOX Network. This week’s installment, entitled “The Man from G.R.A.M.P.A.” (a play on the 1960s spy series The Man from U.N.C.L.E.), is the penultimate 21st episode of the long-running animated sitcom’s 32nd season. 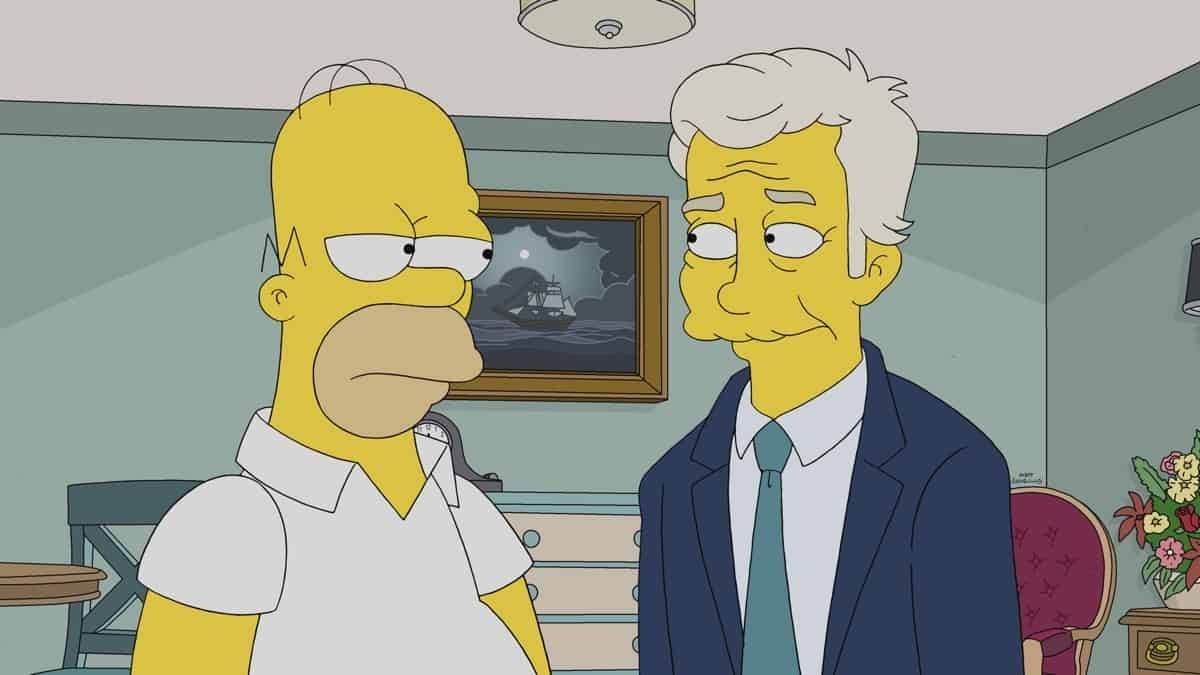 The episode opens at MI5 headquarters in London, where a new spy named Terrance (voiced by guest star Stephen Fry) takes over a critical assignment: tracking down an ex-Russian agent known as the Grey Fox, who is currently hiding out in a small American town containing a nuclear power plant with bad security. Terrance plans to travel to each matching town and flush out the Grey Fox, “even if it takes a fortnite”– cut to 50 years later. Jasper (Harry Shearer) finds that one of his friends at the Springfield Retirement Castle has gone back home to live with her family. The remaining residents, including Grampa Abraham Simpson (Dan Castellaneta), argue over who will be taking the empty room. Grampa asks Homer (also Castellaneta) for help acquiring the room, but they are interrupted by the spy, who has claimed the vacancy for himself and thinks Abe is the Grey Fox. Terrance takes Homer out for drinks at Moe’s Tavern and tells him he knows everything about him.

In a montage, Terrance tells Homer and the other barflies his life story– flashing back to his father trying and failing to flush out moles at MI5. “Wow, a real life spy,” says Lenny (Shearer again). “You must know your way around women and disillusionment.” Terrance wants to clear his father’s good name by tracking down the Grey Fox. The boys are singing a round of “It’s a Long Way to Tipperary” to comfort him when Marge (Julie Kavner) arrives at the bar to bring Homer home, and she is immediately charmed by the spy. Sleeping at home, Homer is startled awake by the telephone ringing. On the other end is Terrence, who tells him, “If you want to know more about your father, come see me.” He shows Homer his research pointing him to Abe Simpson. He asks Homer what his father did for a living, to which Homer replies he doesn’t know, and all the rest of the questions Terrance poses points to Abe being an MI5 agent as well. Terrance also observes that Homer got his job at the Springfield Nuclear Power Plant suspiciously easily. Later, Homer meets Terrance– in disguise as an old woman– at the Springfield Pier, where they watch Abe sit on a bench and meet with another elderly man. The two switch canes, and Terrance explains Abe is receiving instructions from his handlers hidden in the new cane. Abe is also slipped a secret envelope by two Russian-looking gentlemen, and Homer concedes that his father is likely a secret spy. Terrance wants Homer’s help in bringing Abe in safely, but only if he agrees to treat his father “slightly better” than the home he’s living in now. Homer confronts Abe at the Retirement Castle, and packs his bags to turn him over to Terrance. He changes his mind, deciding to let him go free, but the two Simpson men are ambushed by Terrance and thrown into the trunk of his car.

In the trunk, Homer and his father argue about him doing spy stuff like taking the other old man’s cane. “I’m always taking somebody’s something.” He explains he got Canadian blood pressure medication from the Russians. Grampa is touched that Homer has expressed concern for him at all, while Terrance tries to drown out their gushing over each other by turning up the radio louder. At the Retirement Castle, Marge looks for Grampa and Homer with no help from the receptionist. She’s approached by a woman claiming to be Terrance’s daughter, who starts spilling the beans about the whole situation. Police Chief Wiggum (also Azaria) tracks down Terrance’s car with the help of the spy’s daughter, and they rescue Homer and Abe. Terrance breaks down, having failed in his quest of finding the Grey Fox. Grandpa decides to help him out by pretending to be the ex-agent just long enough for Terrance to see him handcuffed. Then Homer and Terrance drive off into the sunset singing “It’s a Long Way to Tipperary.” In the episode’s coda, Lisa (Yeardley Smith) is listening at Maggie’s door with an empty glass and hears what sounds like a garbled Russian transmission. She and Homer burst into the baby’s bedroom and discover that Maggie’s See ‘n Say toy is speaking in Russian because, according to Homer, “it only costs three bucks on Amazon.”

Next week: “The Last Barfighter” 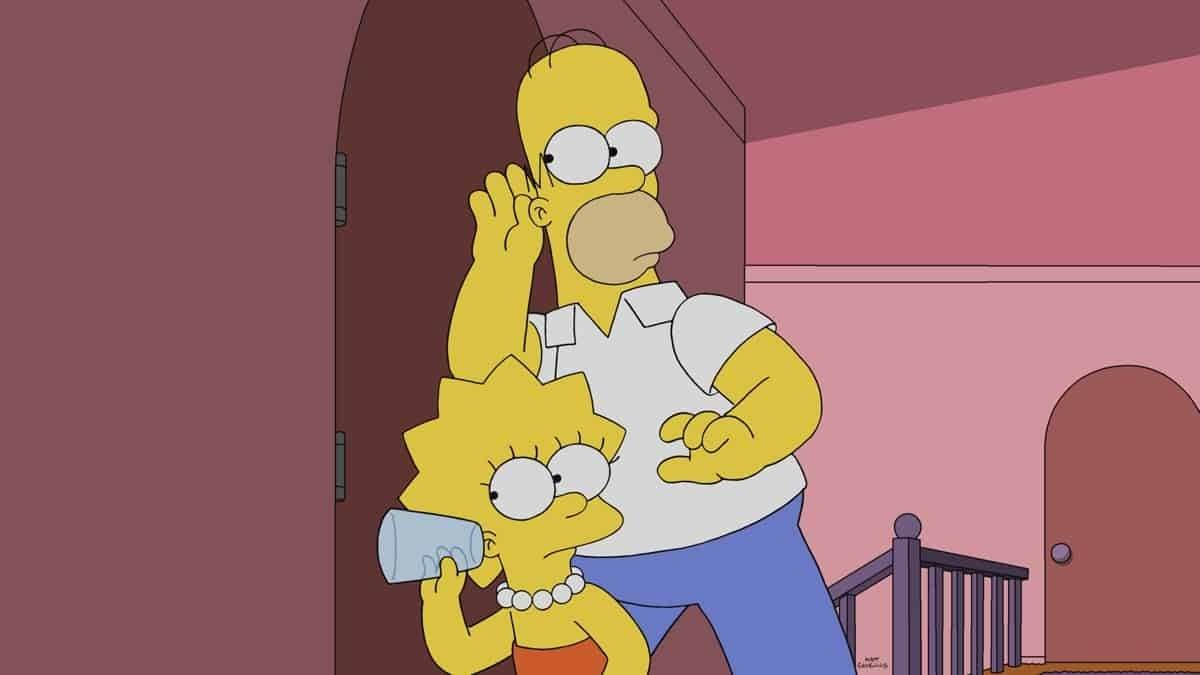