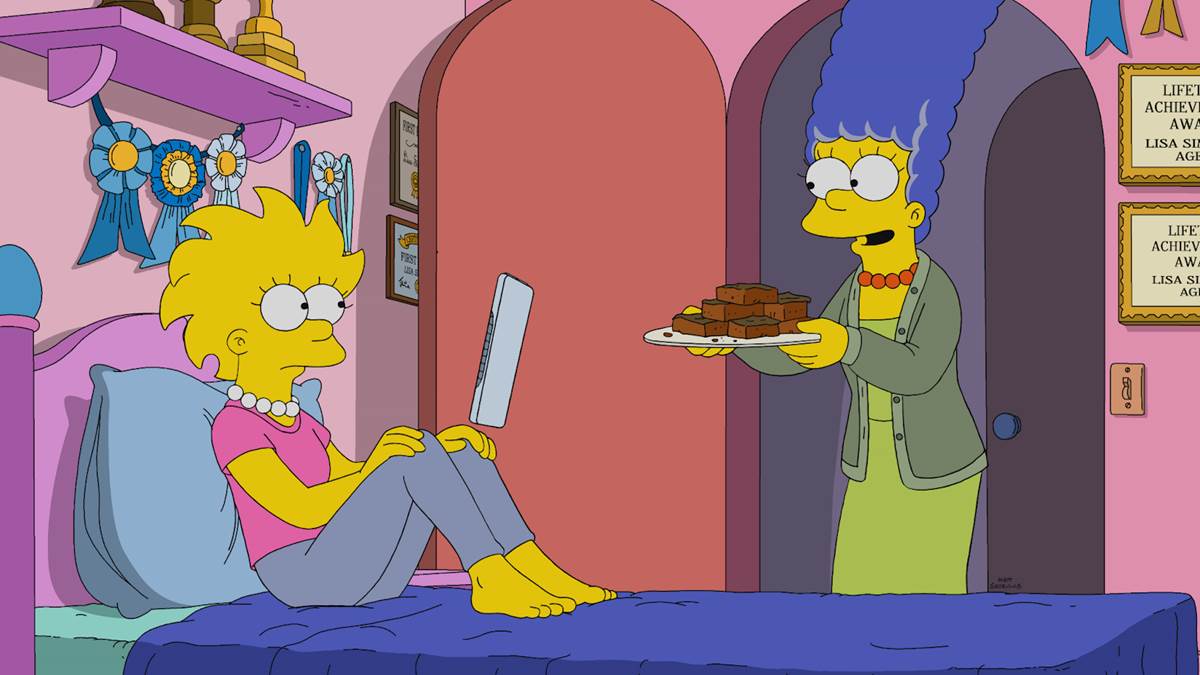 Hello and welcome to Laughing Place’s regular recap of new episodes of The Simpsons on the FOX Network. This week’s installment, entitled “Mother and Child Reunion” (named after the 1972 Paul Simon song), is the 20th episode of the long-running animated sitcom’s 32nd season.

Couch Gag: Marge and Homer are giant birds settling down in their nest in the living room. Homer squashes an egg and tastes the yolk. The episode begins with the Simpson family entering into a magic shop run by Werner Herzog (in his fourth appearance on the show), who offers to show them the future via tarot cards. “Good news, Homer. In the future you stop drinking… and the boy becomes a fine person.” The magician predicts “years of trouble between Marge and Lisa” beginning when Lisa (voiced by Yeardley Smith) decides where to go to college. We flash forward to the future, where Marge (Julie Kavner) wakes a teenage Lisa up proclaiming that Lisa will be the first Simpson to ever finish college. In the kitchen, Marge 3D prints a stack of pancakes and a one-eyed Grampa Simpson (Dan Castellaneta) says he’s counting on Lisa to find a cure for every disease that might kill him.

At the high school, Milhouse (Pamela Hayden) surprises Lisa with a prom-posal performed by his dad Kirk (Hank Azaria) doing an imitation of Seth MacFarlane imitating Frank Sinatra. Lisa jumps in Bart’s (Nancy Cartwright) car and they drive away. Lisa cries to Bart that she’s not looking forward to college because she’s starting to doubt it being worth all the trouble. “Then why did you study so hard and miss all the fun?” asks Bart, and we see a flashback montage of Lisa studying while the rest of the family has fun. At home, Lisa discovers she has been accepted into every college she applied to, and Marge calls in the family (and Ned Flanders– voiced by Harry Shearer) to hear Lisa’s decision. Lisa shocks everyone by saying she’s not going to go to college. “Marge, I didn’t go to college, and I’m wealthy in the most important way– lack of student loans,” says Homer (also Castellaneta). Marge tries to convince Lisa to change her mind, but it doesn’t work. Later, Marge is still upset with Lisa for deciding not to go to college after all the work she did in raising her, but Homer is thrilled that he may have finally become the favorite parent. Marge attempts to bribe Lisa with brownies, but Lisa admits she never really liked Marge’s brownies and says she’s burned out and needs time to think. Marge makes Lisa promise that before she makes any final decisions, she’ll talk to the one responsible man in her life– Ned Flanders. In the present, Werner Herzog flips over more tarot cards while Homer thinks he’s playing blackjack. In the future, Lisa is working at a fast-food restaurant with Squeaky-Voiced Teen (now Squeaky-Voiced Adult, still voiced by Castellaneta) as her boss. Marge says Lisa has taken a gap week and it’s time for her to go to college, but Lisa won’t relent. At work, Lisa is inspired by a child who can’t read to start an after-school program for underprivileged children.

Lisa starts the “Boundless Horizons School” saying she’s going to use every trick there is, including teaching Shakespeare using dances from TikTok. “Her incredible lameness has me riveted,” says one of her students. Suddenly Lisa’s class is raided by Police Chief Wiggum (also Azaria) who demands she pay the appropriate tax on her business. Then we see a montage of Lisa’s school becoming successful and spurring hundreds of franchise locations. She then runs for school superintendent against Chalmers (Azaria again), who gets booed off the stage when he calls Lisa “nasty” and “homely.” On the news, we discover that Lisa is now running for President of the United States. Nate Silver calls the election for Lisa, and George Stephanopolous confirms: “Lisa Simpson has been elected the eighth president who did not go to college.” Walking home, Marge learns that Lisa got elected president from town gossip Helen Lovejoy (Maggie Roswell). “I really am out of the loop,” bemoans Marge. In the present, Marge asks Werner Herzog if she and Lisa will ever get along again, but Homer only wants to know how many more Ghostbusters movies they’re going to make. Herzog flips over the final two cards and we cut to the future again, on Lisa’s inauguration day. She says she will make a great president because she doesn’t have a life. Her opponent concedes just as she takes office, and Lisa notes “these transitional tantrums get longer and longer.” Bart has become a “pot CEO” and owner of three NBA teams, and reunites with Lisa as they settle their lifelong differences and a drone show welcomes Lisa to the White House. Bart introduces another flashback montage where we see Marge helping out in all the scenes from the first one. Bart summons Marge to the White House, and Lisa brings out a “Mom translator” to help in their conversation. The translator effectively tells Marge and Lisa they love each other very much, and they close out the episode with a hug.

In the coda, Lisa says she enjoyed the story, but asks Werner Herzog how much of it was true. Herzog consults the “Oracla” (AKA Nate Silver) in a crystal ball, who gives percentage-point rundowns on how likely each scenario is. Naturally Homer tries to gamble on the predictions, but Silver shuts him down. 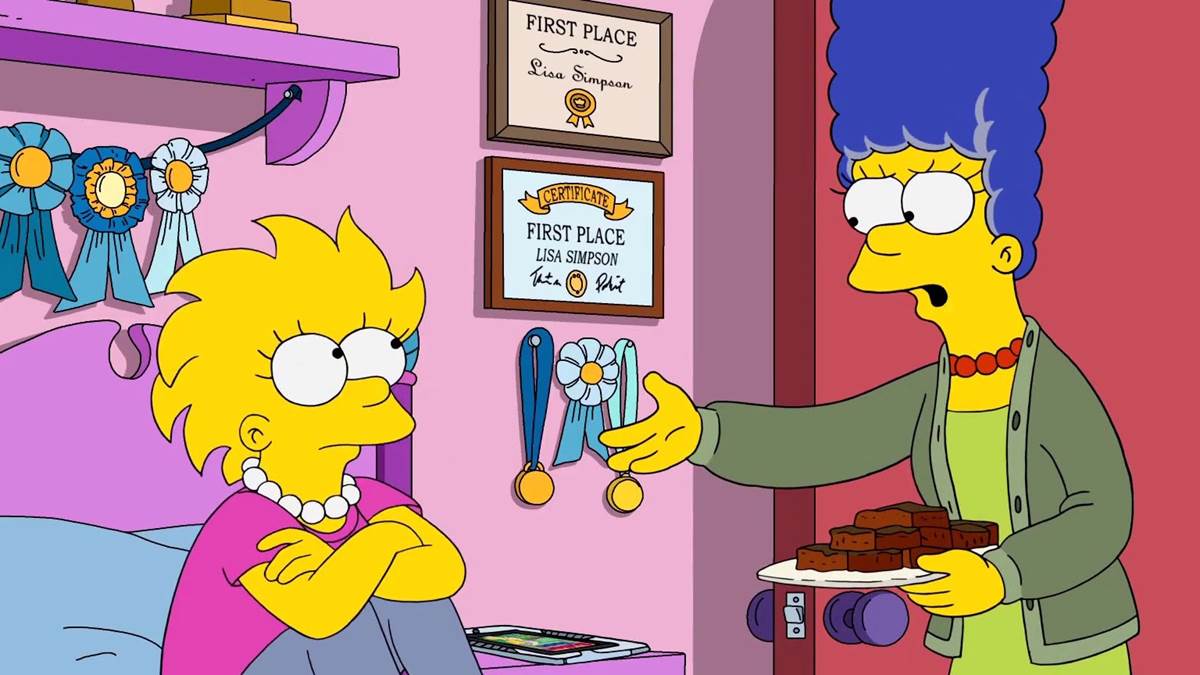