Hello and welcome to Laughing Place’s regular recap of new episodes of The Simpsons on the FOX Network. This week’s installment, entitled “Panic On the Streets of Springfield” (a reference to the song “Panic” by The Smiths), is the 19th episode of the long-running animated sitcom’s 32nd season. The episode begins with Homer (Dan Castellaneta) talking to Dr. Hibbert (now voiced by Kevin Michael Richardson, taking over from Harry Shearer) about his health problems. He seems unconcerned about everything except his low testosterone, for which Hibbert prescribes a new drug– but not before he watches an advertisement for a truck on a tablet. The “Ultimate Torque” clip shows the truck towing a whale out of the ocean, and Homer is immediately sold, of course. He arrives home with his newly purchased truck and tears up the front lawn, annoying Marge (Julie Kavner) but thrilling Bart (Nancy Cartwright). Lisa (Yeardley Smith) says the truck is an offense to everything she holds dear but is impressed with the included subscription to the music streaming service “Slapify.”

She dares the Slapify program’s algorithm to calculate her musical taste and skims through the suggestions. “Good taste is a curse, but I’m sure a great song is just a click away.” Finally Slapify suggests a singer named Quilloughby and his band The Snuffs (an obvious parody of Morrissey and The Smiths) and his song “Hamburger Homicide.” Lisa instantly falls in love with the singer and his dedication to animal rights. Inspired, she serves mushroom tacos in the school cafeteria until Lunchlady Dora (Tress MacNeille) reveals the tacos have bacon in them (vegan = vegetables + bacon, apparently), much to Lisa’s disgust. She runs away and finds consolation in talking to Quilloughby (voiced by guest star Benedict Cumberbatch of Doctor Strange fame) as her new imaginary friend. 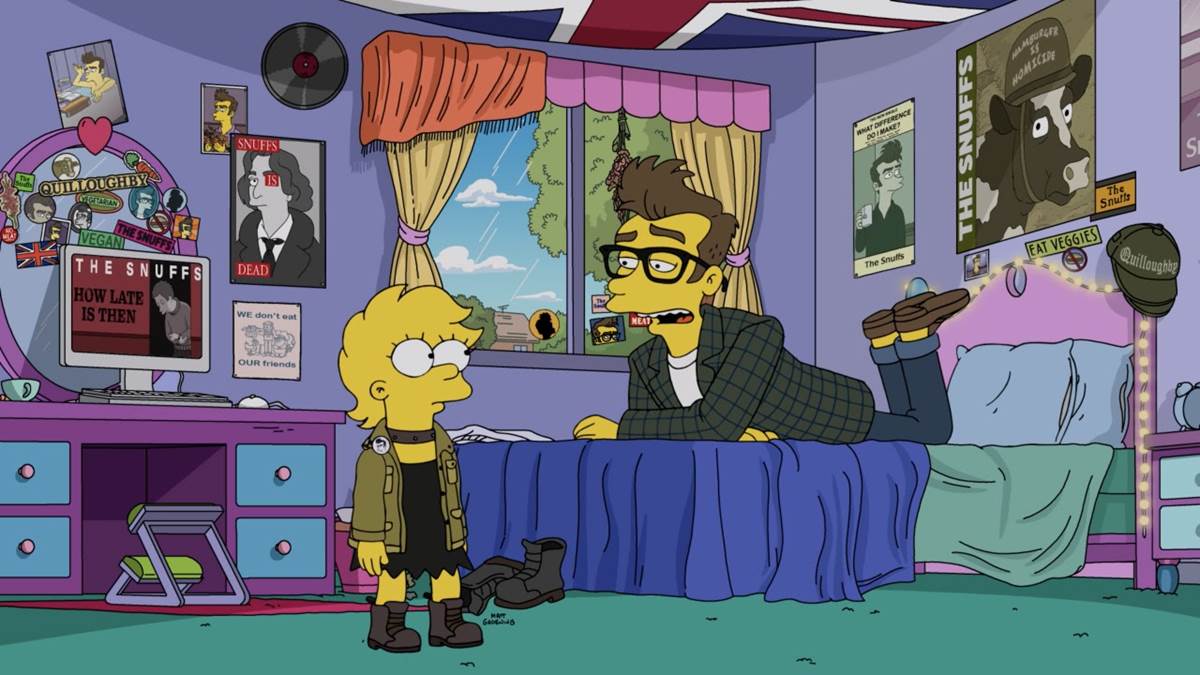 Lisa starts to think she’s going crazy for imagining Quilloughby chatting with her in her bedroom until he whispers a killer comeback to Bart in her ear about his friends slowly, imperceptibly growing tired of him– which turns out to be accurate. “I was just yawning because I stayed up late thinking about your pranks,” says Nelson (also Cartwright) sarcastically. “I think I’m going to like hallucinating you,” says Lisa to Quilloughy. Outside, Bart tries the same insult on Homer while he washes his truck, but it doesn’t work so they both go out and attempt to replicate the feats shown in the truck commercial from the beginning of the episode, including tearing out Shel Silverstein’s “Giving Tree.” Quilloughby tells Lisa that Springfield reminds him of his own hometown as they stroll the sidewalks and he snarkily insults people. There’s a Smiths homage music video with Quilloughby and Lisa exploring Springfield called “Everyone is Horrid Except Me (And Possibly You)”.

At school, Lisa has started dressing like a Snuffs fan and insults the music teacher Mr. Largo (Shearer) to the point where he runs out of class crying. “Lisa, I enjoyed that. And I enjoy nothing,” says Quilloughby. Principal Skinner (Shearer again) calls Homer and Marge in for a parent conference, saying he knows children have been getting lost in the music of the past– cut to Martin Prince (Grey Griffin) jamming out to “Maneater” by Hall & Oates. While at the school, Homer uses his new truck to challenge Groundskeeper Willie (also Castellaneta) to a tow-off with his tractor. 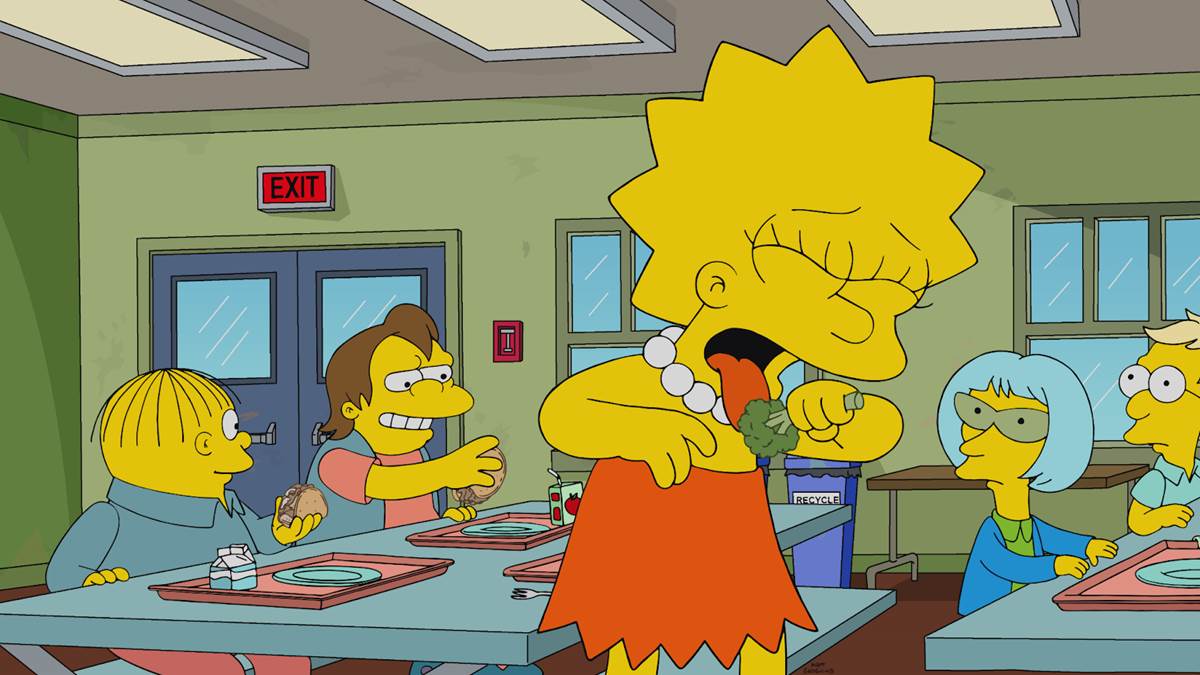 In the car, Marge says she is cancelling Lisa’s subscription to Slapify, so Quilloughby suggests Lisa attend a music festival called Bummershoot where his real-life counterpart is performing. “Those tickets cost like five LEGO sets,” says Lisa, but Quilloughby provides her with Homer’s credit card as a solution. Marge and Homer talk about how to deal with Lisa, but Homer can only think about his truck. “But the truck is who I am! It’s a perfect fit for my manly off-road lifestyle.” Marge rebuts by saying Homer has never been an outdoorsman, and he breaks down in realization that she’s probably right. Lisa takes a bus to Bummershoot with the imaginary Quilloughby, having accidentally bought two tickets– one for herself and one for her imaginary best friend.

Marge and Homer discover Lisa’s use of Homer’s stolen credit card, while Lisa and Quilloughby explore Bummershoot. “These bands are all rubbish and this sun is too… sunny.” Lisa begins to grow weary of Quilloughby’s complaining and overall poor attitude. In the truck on the way to confront Lisa, Bart spurs his parents into arguing more about Homer’s impulsive truck purchase. At the festival, the real Quilloughby takes the stage and is now overweight and unenthusiastic. “I look like Winston Churchill,” remarks the imaginary version. Real Quilloughby berates his own fans and reveals that he’s no longer even vegan, firing sausages into the audience with a cannon, which shocks Lisa, who bids a tearful farewell to her fantasized companion. The crowd boos the real Quilloughby off the stage as Homer and Marge show up in the truck and ram their way through the rioting attendees, saving Lisa from the Ferris wheel. We cut to Homer sleeping at the wheel while stuck in traffic, revealing the previous sequence to have been a dream. “Me and Trucky saved the day,” murmurs Homer. “Sure you did…” consoles Marge, tapping him on the cheek. In the coda, Lisa and Marge bond over Lisa’s rebellious period while they ride in the back of Homer’s truck, and we see flashbacks of Marge’s youthful disagreements with her own mother. “I’ll always be waiting for you on the other side of the slammed door,” says Marge. 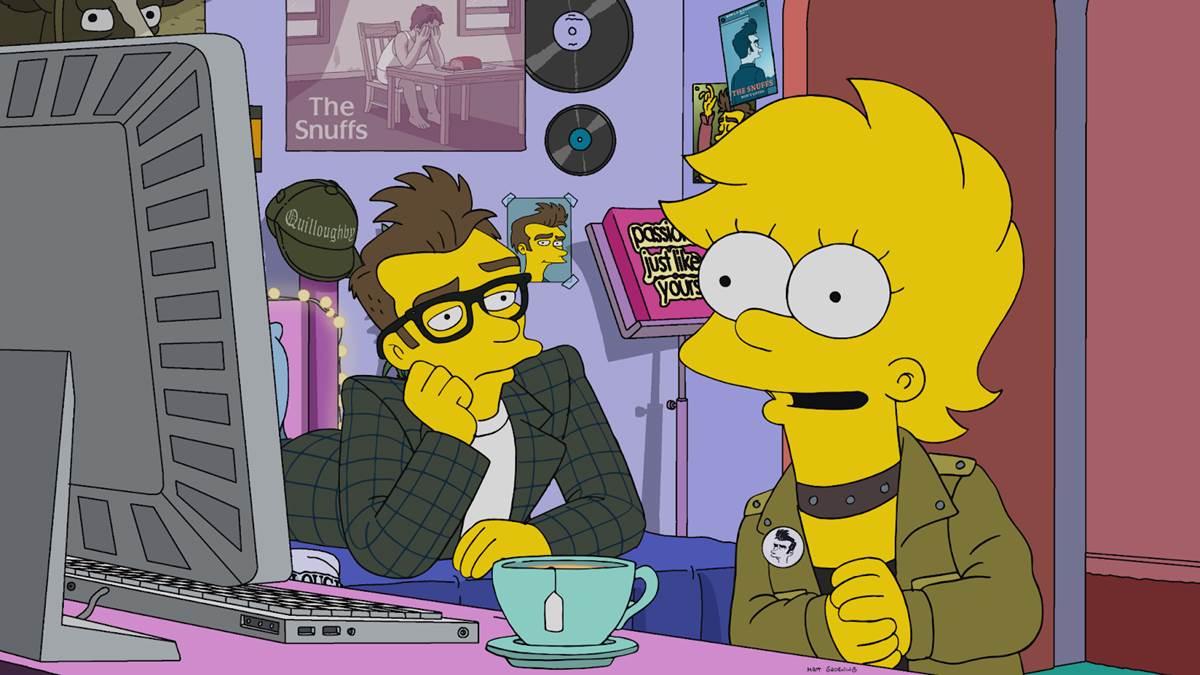