The FOX Network aired the 18th episode of the 32nd season of The Simpsons on April 11th, 2021, which gave fans an episode centered around Charles Montgomery Plantagenet Schicklgruber Burns. In “Burger Kings,” the titan of nuclear energy tries to win people over with a plant-based burger chain. Here’s a full recap of all the fun, frivolity and presumably inconsequential mayhem from “Burger Kings.” (mmm… burgers…)

Couch Gag: – A Simpsons-themed swiss army knife carves the family into potatoes before the knife opens up on the couch to reveal their faces on each blade – by Katrin von Niederhäusern and Janine Wiget (Click here to learn more) 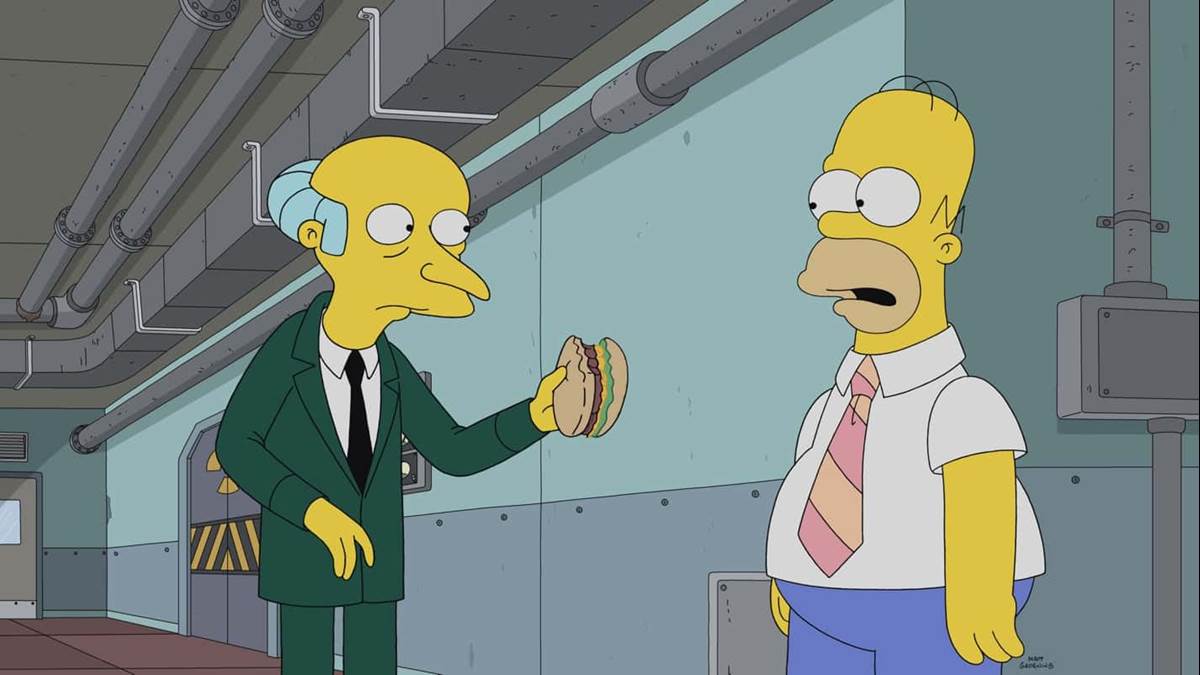 It all begins with Mac Tonight, the short-lived McDonald’s mascot, singing a song about Montgomery Burns, who appears on the cover of Forbes’ “100 Most Evil People Over 100” issue. He wakes up from a nightmare to find his personal chef with his usual breakfast, a single raising with the ripples ironed out and a grain of sugar. Burns takes a bite after cutting it with a knife. “Too sharp, it could cut me to ribbons,” he exclaims before releasing the hounds on his chef.

Walking through the Springfield Power Plant with Smithers in tow, Mr. Burns tells his lackey that he wants some real food when he sees Homer come from around the corner with a Krusty Burger. Burns grabs it, the bun instantly sucking all the hydration out of the senior boss before his assistant pulls out a spray bottle to revive him. Burns takes a bite and suddenly has a vision of himself aboard the Titanic as a young man, drawing a hamburger with arms and legs while it sprays out on the couch, then helping the anthropomorphic burger stay out of the water atop a detached door from the sinking ship while Burns drowns.

Mr. Burns quickly becomes addicted to hamburgers, which he at first thought were made of people from hamburg. His weight triples in a single day as a result, raising him up to 42 lbs. After Smithers heroically nabs a burger away from his boss’ clutches, revealing a hidden door where the “Missing Plant Inspectors” are held captive, Burns wakes up in a hospital asking for a burger. Smithers tells him he nearly died from eating so much red meat and Burns tries to literally pull his own plug with a crowd of people outside who are bummed that he survived.

While he was sleeping, Smithers called on Professor Frink to create a solution to Burns’ problem. In comes the professor with a robot who serves Mr. Burns a burger made of plants. Burns suddenly gets a wicked smile on his face as he hatches a plan to profit off this new invention, comparing the feeling to Edison on the day he invented the electric chair. His near death experience also filled him with a desire to be liked by the public. “People have to like the person who helped them live longer, they have to,” he tells Smithers. 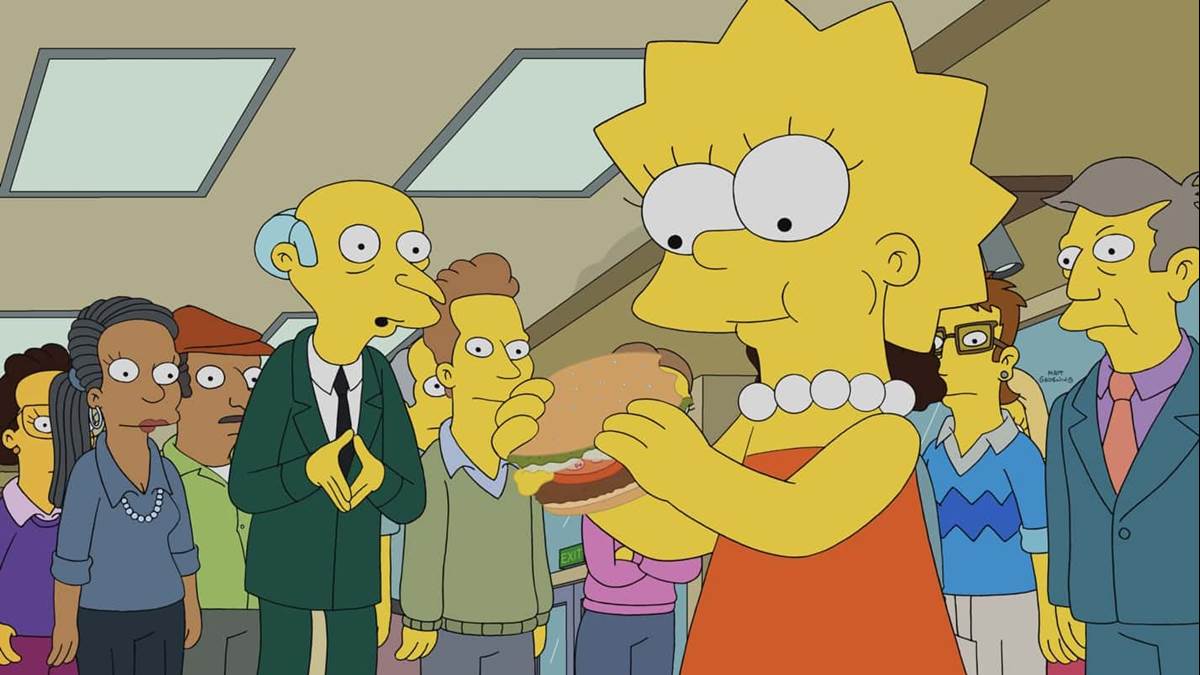 Back at his mansion, Mr. Burns is surrounded by images of fast food restaurateurs now in his likeness, including him with a red pigtailed wig with the ends curled up. His new business venture is called X-Cell-Ent Burger and we soon cut to an unveiling ceremony where Lisa has been chosen at random to be the first consumer to try it. She recounts all the other meat-free substitutes she’s tried as a vegetarian and how she hasn’t liked a single one. As she takes a bite, we see inside her mouth and the tastebuds in the “Meat” zone come alive, looking like little Lisa’s playing the saxophone in a school orchestra. “This burger might just save the world,” Lisa tells Burns as she gives him a hug, which kick starts a chain reaction in which the entire Simpsons family ends up giving Burns a group hug for their own individual reasons. Burns has a flashback to his Fauntleroy childhood where he approached his mother with a drawing only to be dismissed and informed that his father is dead.

Talking business with Smithers, Burns decides he wants the X-Cell-Ent mascot to be a slob and Homer overhears, handing Smithers his business card, which is hand-written on the back of Ned Flanders’ Leftorium card. He instantly gets the job and on the set of  his first commercial, a team of Burns’ lawyers hand Homer a list of pre-approved words he can say as the mascot. 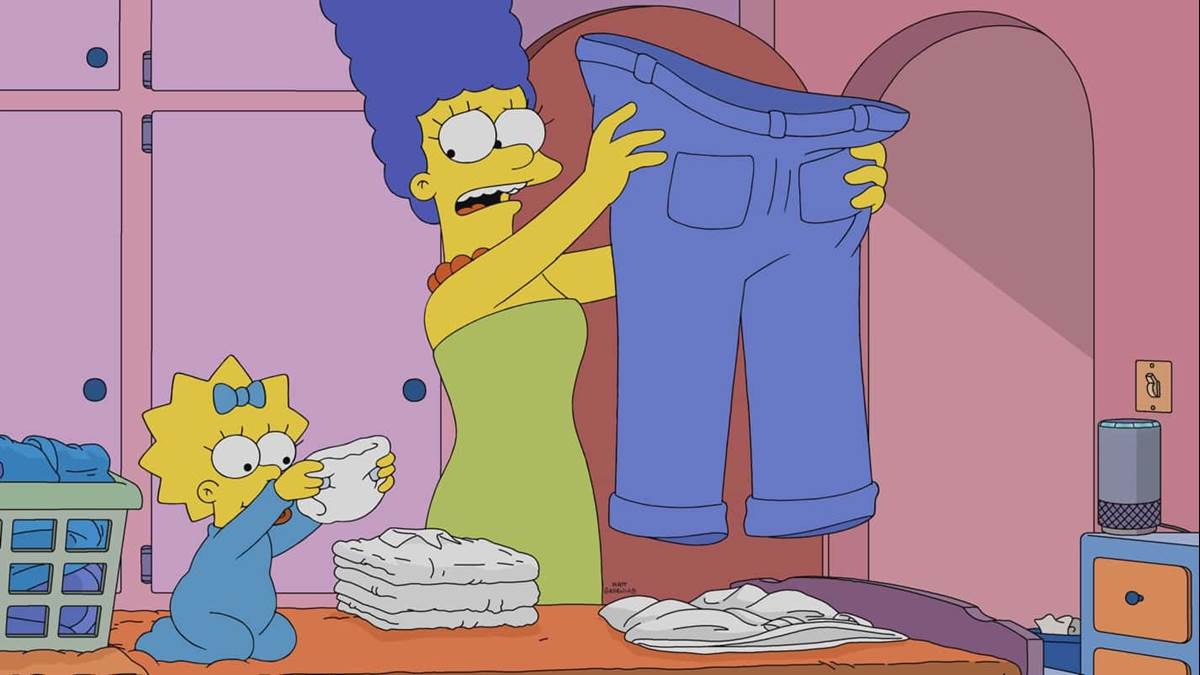 Some time later, Marge is at home folding laundry when she notices that Homer’s pants are stretched thin from the weight he’s gained filming burger commercials. She calls for Alexa and asks if there are “XXL pants in stock.” Alexa pulls up X-Cell-Lent stock and Marge accidentally buys shares. In the confusion, Marge gets mad at Alexa and asks for Siri, with the smart home device revealing that she actually has been Siri disguising her voice as Alexa. Marge quickly forgets the grievance when she becomes addicted to watching her new investment go up and down in the market.

That night, Homer fell asleep reading “ Harry Potter and the Apologizing Author” while Marge watches the evening news with Kent Brockman, who’s covering a story called “Burger Wars.” Homer, hearing that phrase, dreams about a battlefield of fallen burger people (ala Mayor McCheese and Officer Big Mac) are being treated by a medic unit of Hamburger Helper gloves. In the real story, Kent Brockman mentions that following the pride month success Burger King had with changing its name temporarily to “Burger Queer,” Krusty Burger was promoting their new “LGBTQ BLT.”

Homer drives by Krusty Burger the next day with Bart and Lisa in the car, who see Krusty the Clown himself outside a Krusty Burger spinning a rainbow sign with the “LGBTQ BLT” printed on it, desperately trying to drum up some business. The TV clown drops the sign and splits his pants while picking it up, causing laughter from onlookers but not leading to any sales. Bart tells Lisa he’s worried that Mr. Burns is going to put Krusty out of business.

Elsewhere in town, Smithers is driving Burns past crowds of adoring citizens, passing a bus with Homer’s face on it to promote his new business that says “Abso-Lettuce.” They arrive at the “Beloved Billionaires Club,” which Burns has always wanted to join. It’s so exclusive that the only other members are Bill Gates and Warren Buffet, with a host fighting Mark Zuckerberg away after his repeated attempts to get in. Riding their bikes through town, Bart, Lisa and Millhouse pass a group of kids with a demogorgon riding behind them (from Stranger Things). Lisa is eating an X-Cell-Ent Burger, but spits it out when Bart tells her he thinks the secret to why it’s so good is that they use actual meat. Bart says he was only joking, but she wants to go see the factory for themselves as some empty bikes rolle by, followed by a demogorgon with limbs hanging out of its mouth. At the factory, Lisa watches as a man uses an air gun to break the stems of each plant and she soon realizes what they are: endangered plants form the Amazon rainforest.

Lisa thinks Mr. Burns must be unaway that the plants used in his burgers are endangered but Bart reminds her that he’s evil. She goes to the “Beloved Billionaires Club” to inform him, but he doesn’t want to hear her out. Burns tries to avoid Lisa by shuffling his feet as fast as he can and getting into his old jalopy, but the determined eight-year-old beats him. Burns releases the hounds and Lisa says “You mean these hounds?,” sitting on the steps with them as they kiss her face. 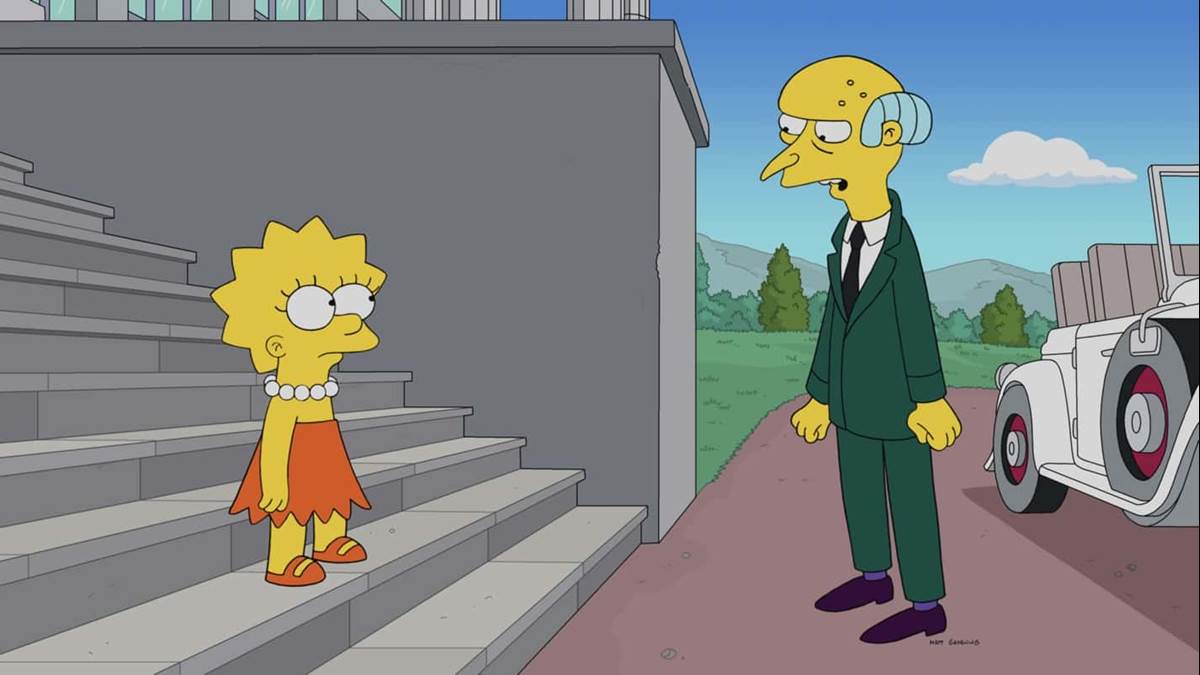 Marge is at home watching “Crazy Cash” when Lisa walks in and turns it off. Marge sees that Lisa is sad and asks what’s wrong. When Lisa tells her mom about the endangered plants being used in the meat-free burgers, Marge says “What about the shareholders?” Looking around at all the evidence of Marge’s new stock market addiction, Lisa is horrified and goes to Homer instead, arguing that Burns is killing the “Lungs of the Earth.” Homer lets her down, as per usual, and isn’t going to do anything about it. That night, Homer has a dream where all of the major fast food mascots are at a playground and show him how bad Mr. Burns really is, including another hit song from Mac Tonight.  “Once again, dreams have taught me more than all the books ever written,” Homer says when he wakes up. “I know what I have to do.”

It’s the grand opening of an X-Cell-Ent Burger and lots of people are waiting for a ribbon cutting, followed by a Q&A with the brand’s mascot. As Homer arrives, quietly vowing to tear the company down, he is reminded that he’s only allowed to say brand-approved words when answering questions. While on stage, Lisa is out in the crowd asking questions that allow Homer to confirm that the burgers are made from endangered plants vital to the planet. As the shocked crowd parts and X-Cell-Ent Burger is ruined, Krusty emerges and says “I did it again. I won by doing nothing.” Lisa admits to Marge that she feels conflicted and Marge does, too, admitting that she knew the stock would tank and sold all of it right before the fall.

In the car, Smithers is concerned and lowers the visor to find Mr. Burns smiling in the backseat. “I’m no longer crushed by morality,” Mr. Burns tells him. Smithers offers to take him to a school for the blind so Mr. Burns can convince them that aliens have landed. 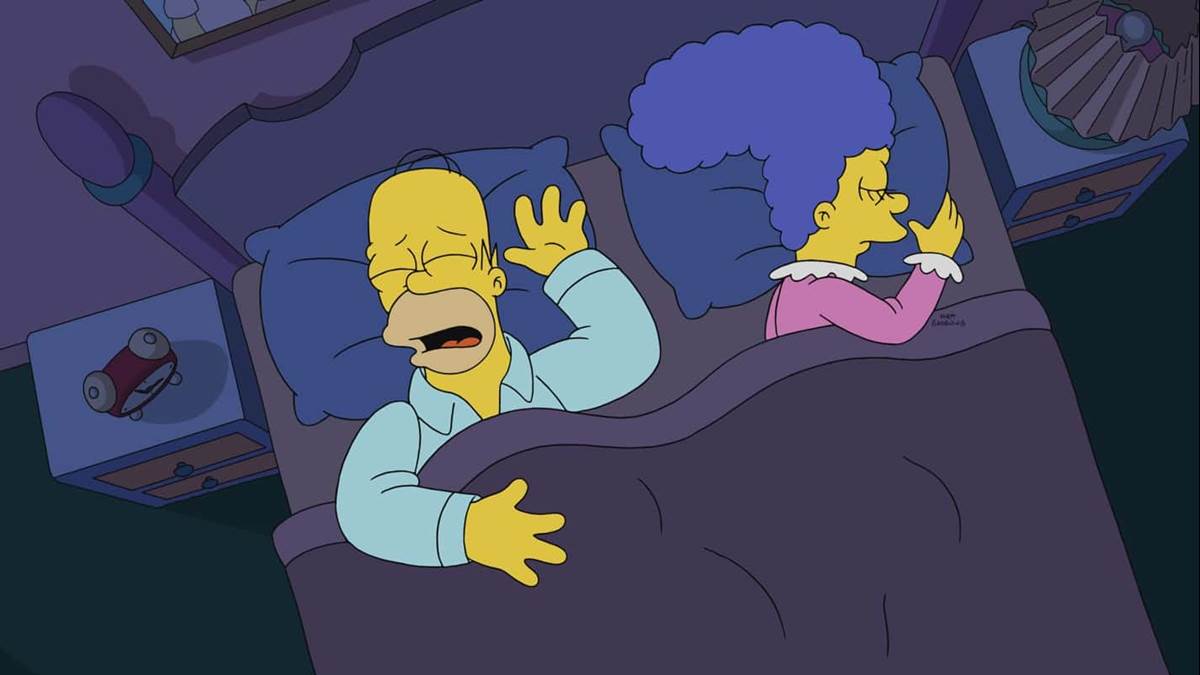 Just before the credits, Mac Tonight returns for another dream of Homer’s where he recaps the happy ending. The camera zooms back to find Mayor McCheese with a few bits already taken out of his head. Homer, holding the former McDonald’s mascot, says “Tell me when it hurts.” McCheese exclaims “It hurt from the beginning!”

The Simpsons will be back on April 18th with "Panic on the Streets of Springfield."