Avengers Campus opens at Disney California Adventure on June 4th and for fans who can’t wait, the new Marvel-themed land has taken over the Disneyland Backlot Premiere Shop inside Stage 17. Walking along a step-and-repeat wall advertising the latest MCU projects, including WandaVision, The Falcon and the Winter Soldier, Loki and Black Widow, fans enter a portal into the world of the Avengers. 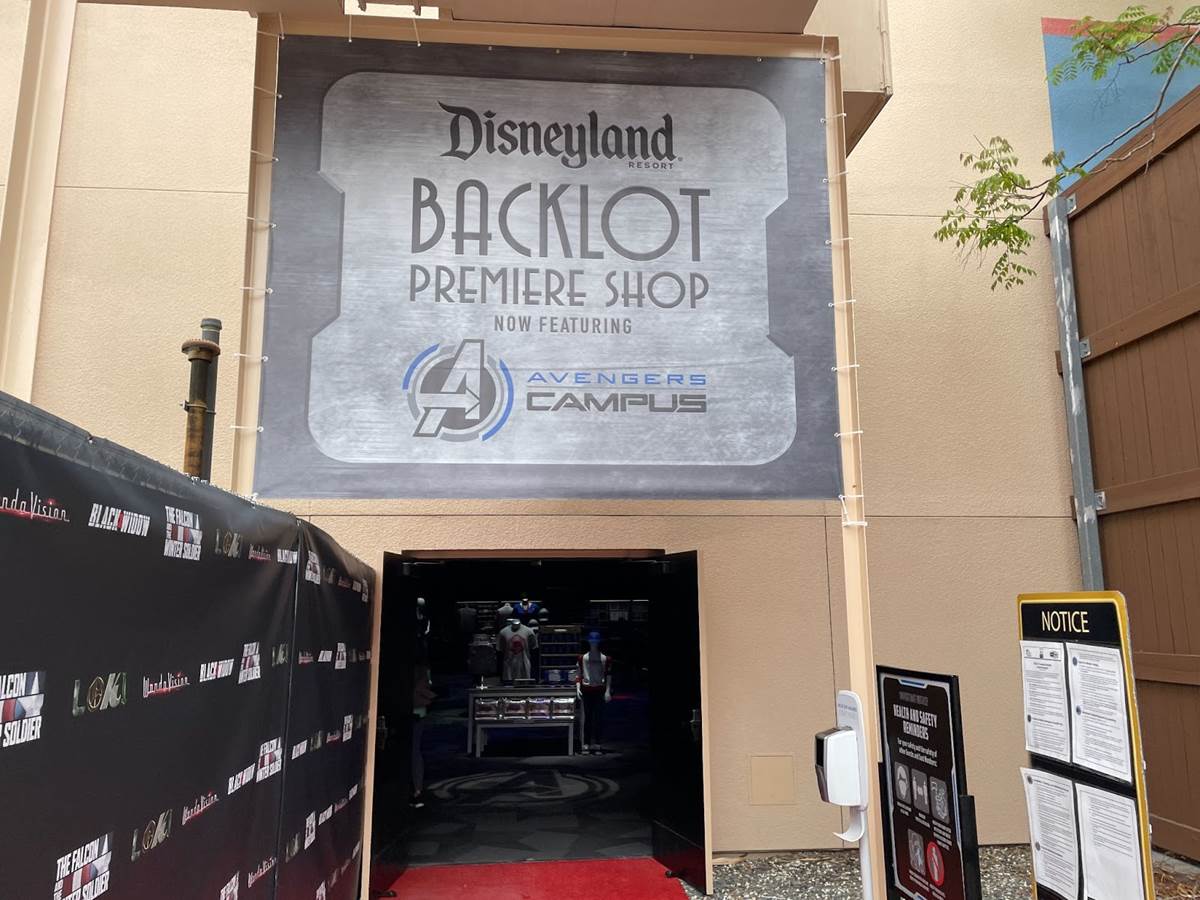 More than just a store, several photo opportunities await fans inside, including the glowing Avengers “A.” You must be familiar with Pym Particles because you somehow became ant-sized next to this pretzel and soda. 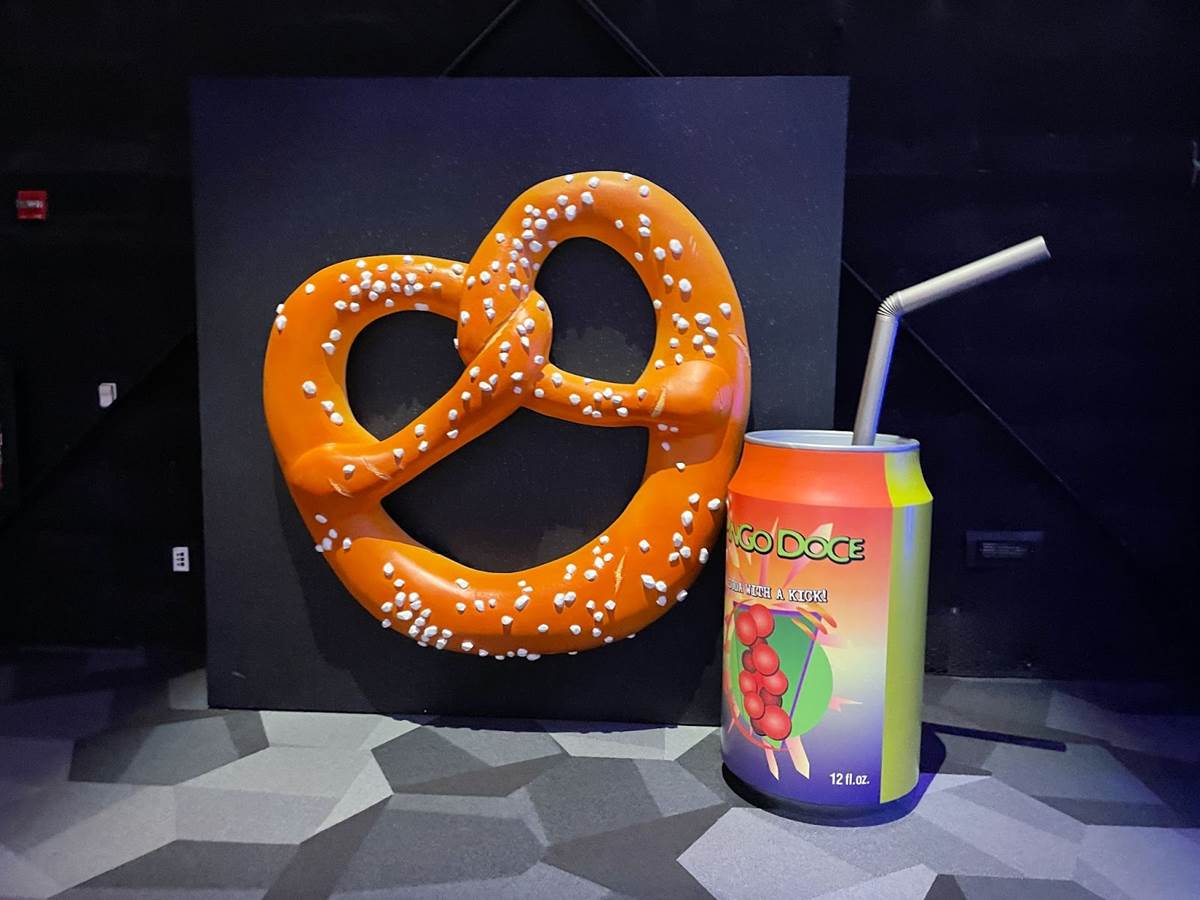 The room is also divided by a large map of Avengers Campus. If you time your visit right, you can see a live demonstration of the latest WEB technology, the Spider Bot! 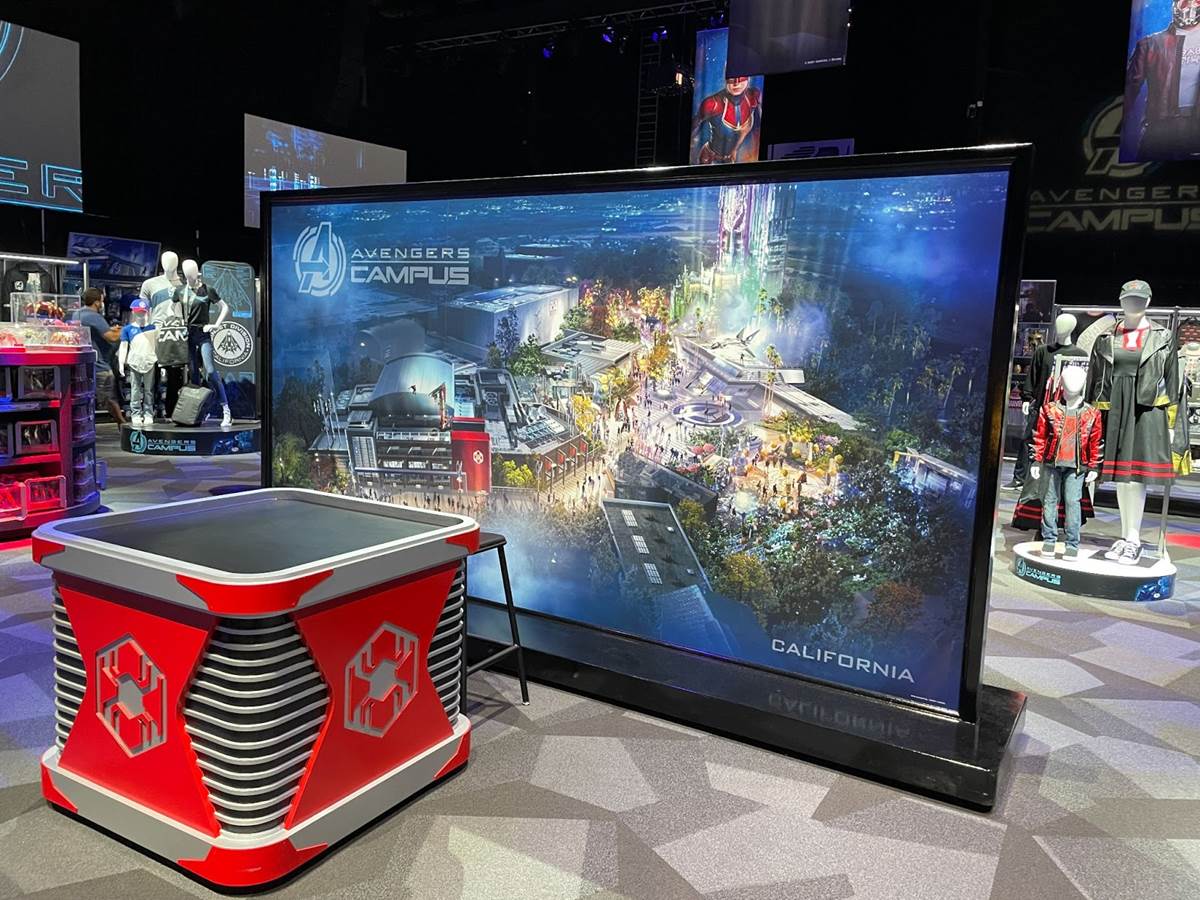 Spider Bots play a key role in the upcoming attraction, WEB SLINGERS: A Spider-Man Adventure, and you can view a prototype design in a display case near the Spider Bots section of the store. Spider Bots made a brief appearance last winter before Disney decided to hold their inventory until closer to the opening of Avengers Campus. Now that the moment is here, fans can also add Tactical Upgrades to their Spider-Bot, with styles themed to other Marvel characters like Iron Man, Ant-Man, Wasp, Black Widow and Black Panther. With the ability to battle other Spider-Bots, these backpacks seem like a smart add-on for your future Avengers Campus missions. They not only allow you to display your Spider Bot under stretchy webbing, but can also help you carry other WEB Tech items with you. 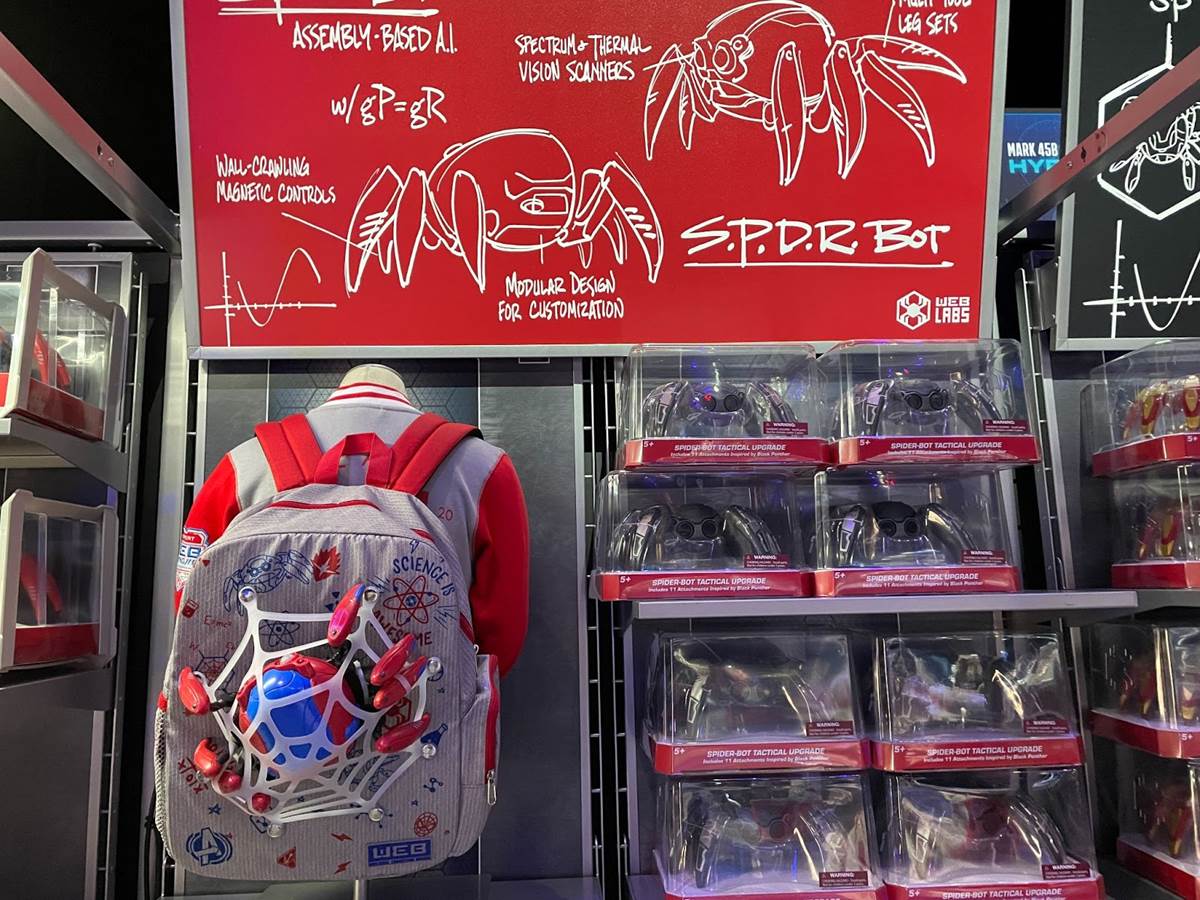 It’s time to talk about WEB Power Bands and accessories, which interact with WEB SLINGERS: A Spider-Man Adventure in addition to functioning as toys you can play with at home. The WEB Power Band is the base of the collection, required in order to use the other add-on accessories. It comes with a mini projector that it uses for the at-home play functionality. Flipping the switch to ride mode pairs it with WEB SLINGERS: A Spider-Man Adventure, allowing you to help Spider-Man on the attraction with milti-fire webs. 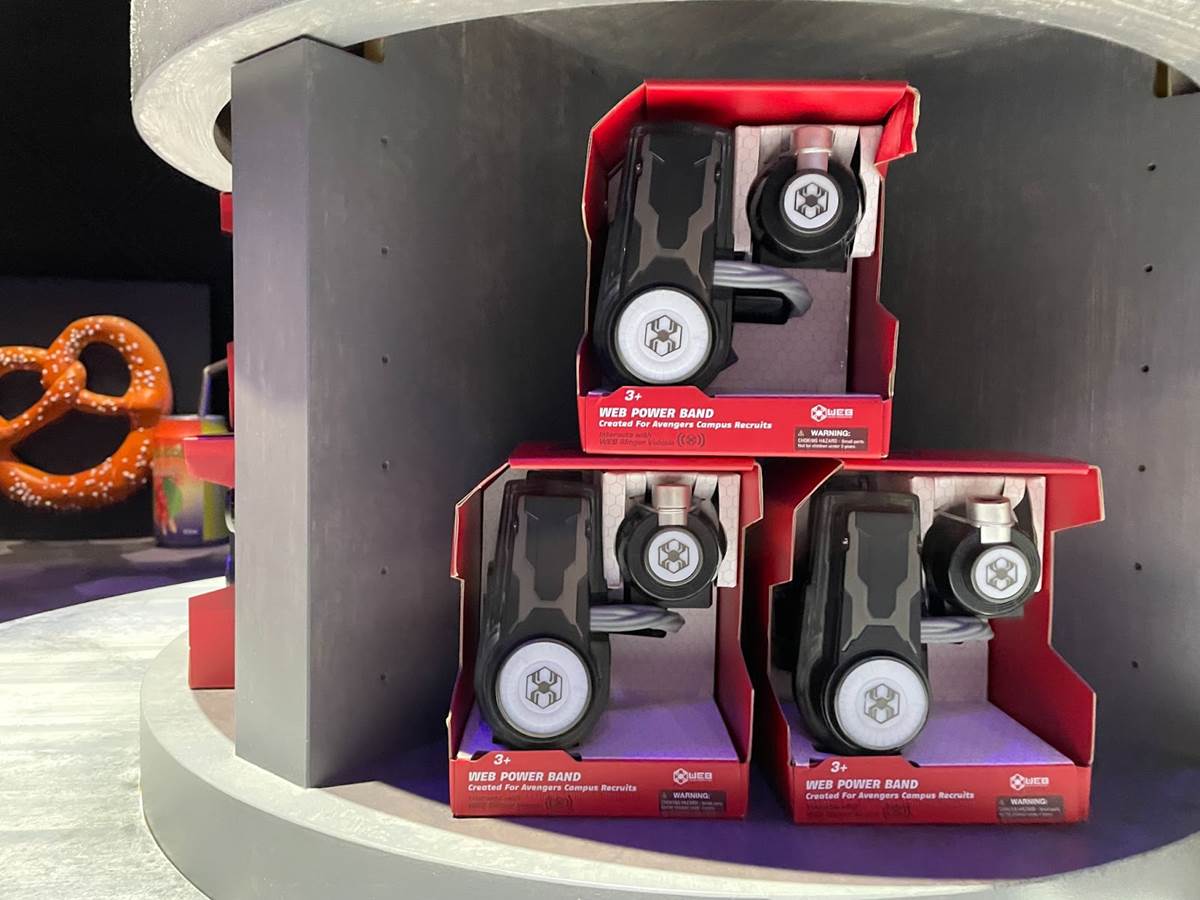 WEB Shooters plug in to the Web Power Band, with a retractable chord that creates Web Slinging Action. The activator is used by creating Spider-Man’s “Thwip” hand and flicking your wrist. On the attraction, it adds electro-dynamic webs to your powers. This accessory comes in white and pink, themed to Spider-Man and Ghost Spider. Backed by Stark Enterprises, the WEB Power Band can also attach to repulsors, available in red (Iron Man) and blue (Rescue). They come with 3 “Training spheres,” which can levitate above the repulsor cannon in play mode. On the attraction, it gives riders repulsor blasts instead of shooting spider webs. 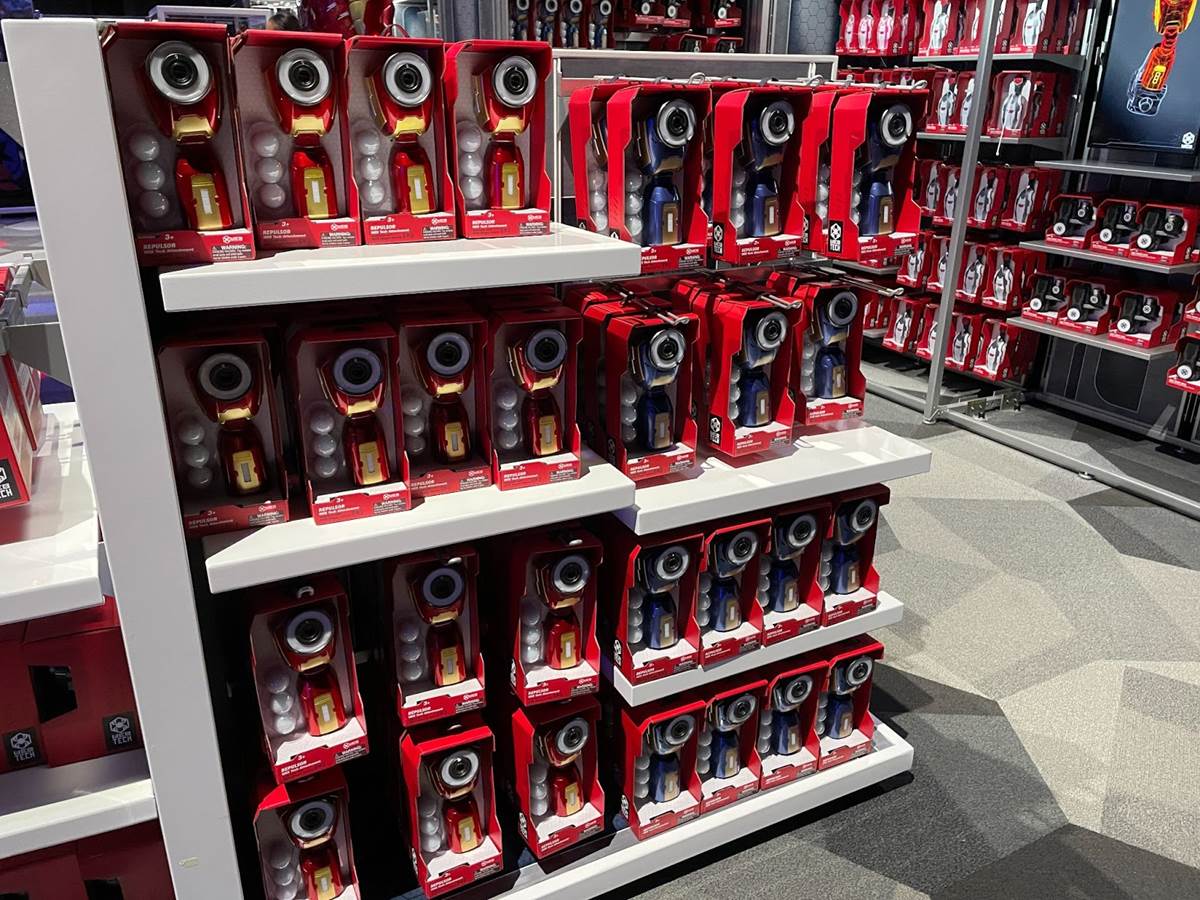 There’s also no shortage of WEB apparel to make recruits look stylish with their WEB Power Band and attachments. 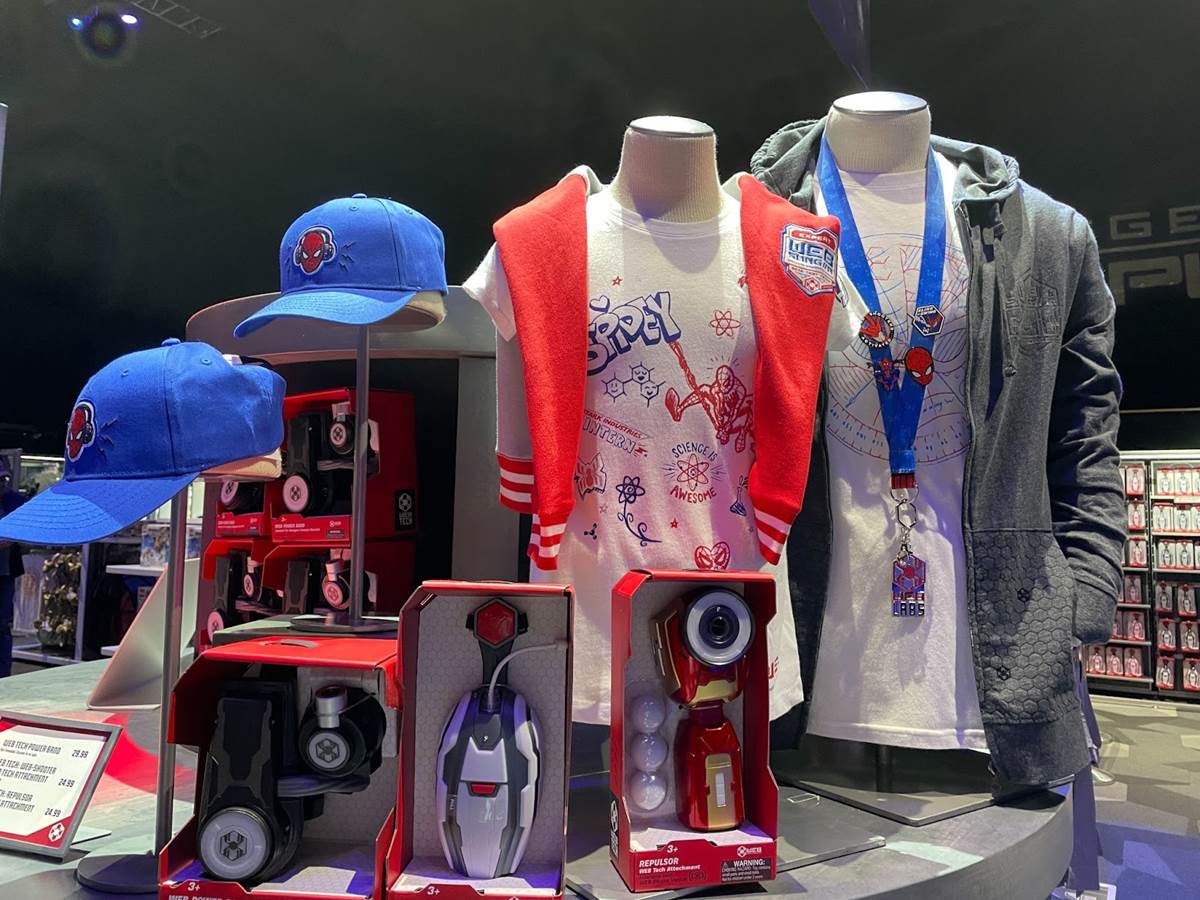 There are also some cool WEB Tech items that don’t interact with the ride, but are still really cool. A pair of Spider-Man goggles have 17 different expressions as fans wear them. And a pair of silver Web Shooters like Spider-Man’s feature lights and sounds, plus a display base. 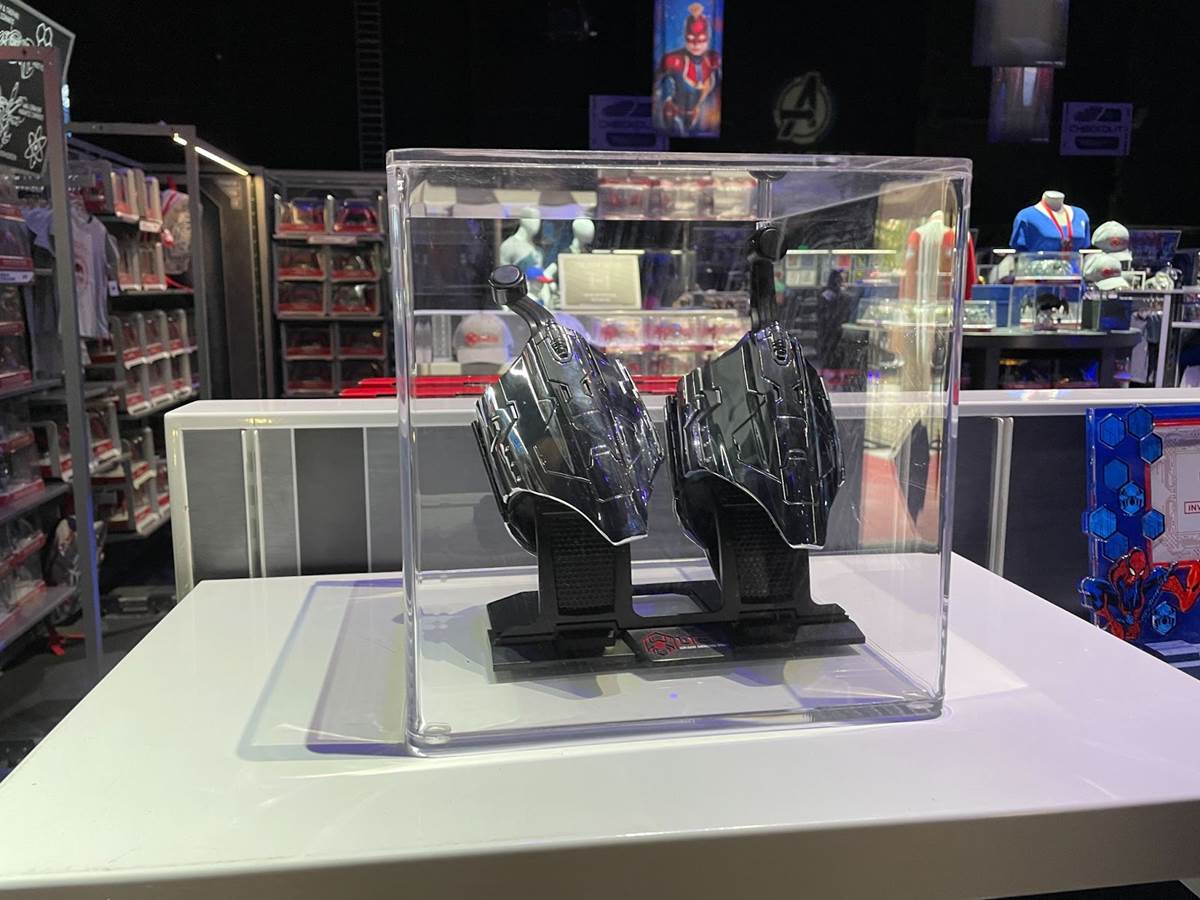 There’s a toy of the ride vehicle for WEB SLINGERS: A Spider-Man Adventure that has a rotating base just like the ride itself, perfect for kids who like to bring a piece of the theme parks home with them. And if you happen to snap a frameable photo in Avengers Campus like Peter Parker, WEB has you covered. 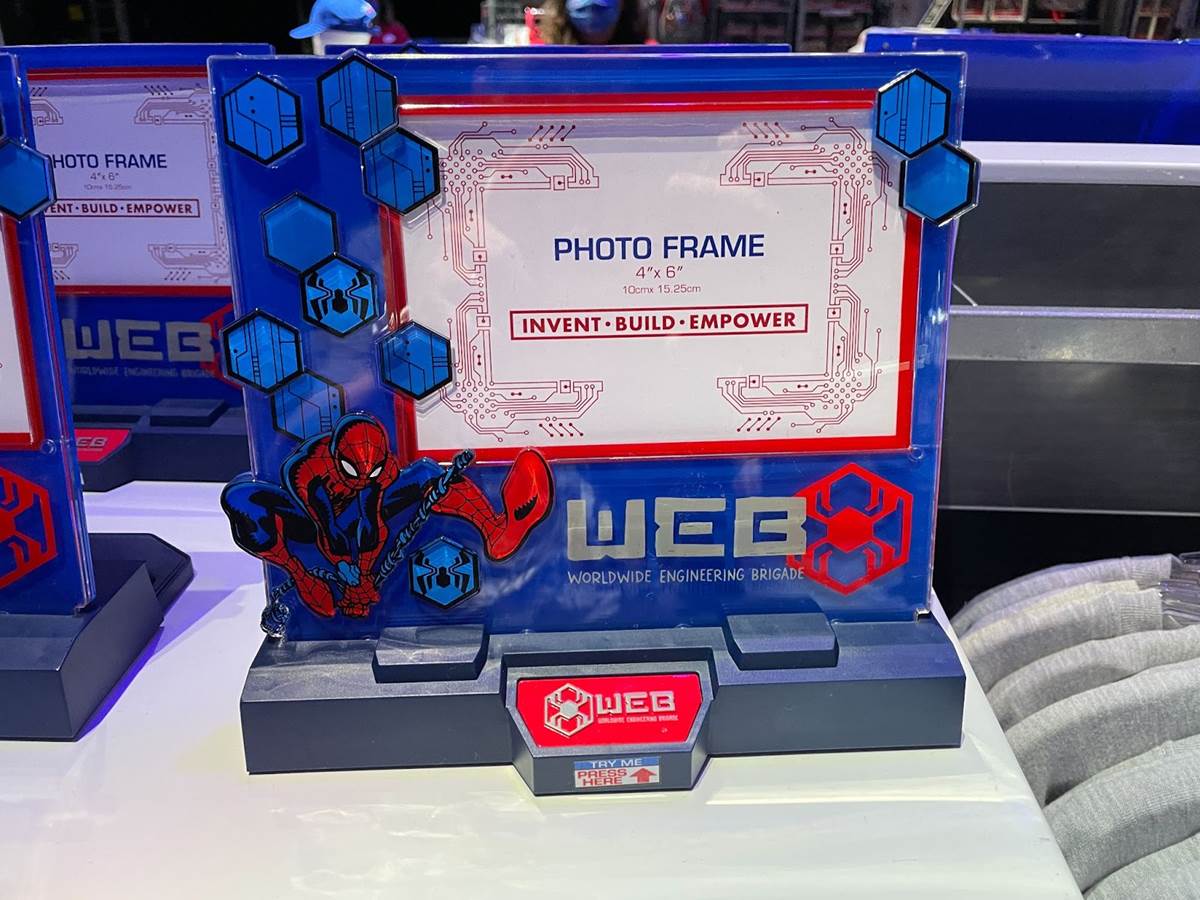 Magnets, keychains and patches allow you to bring home smaller souvenirs for the space-conscious fan. 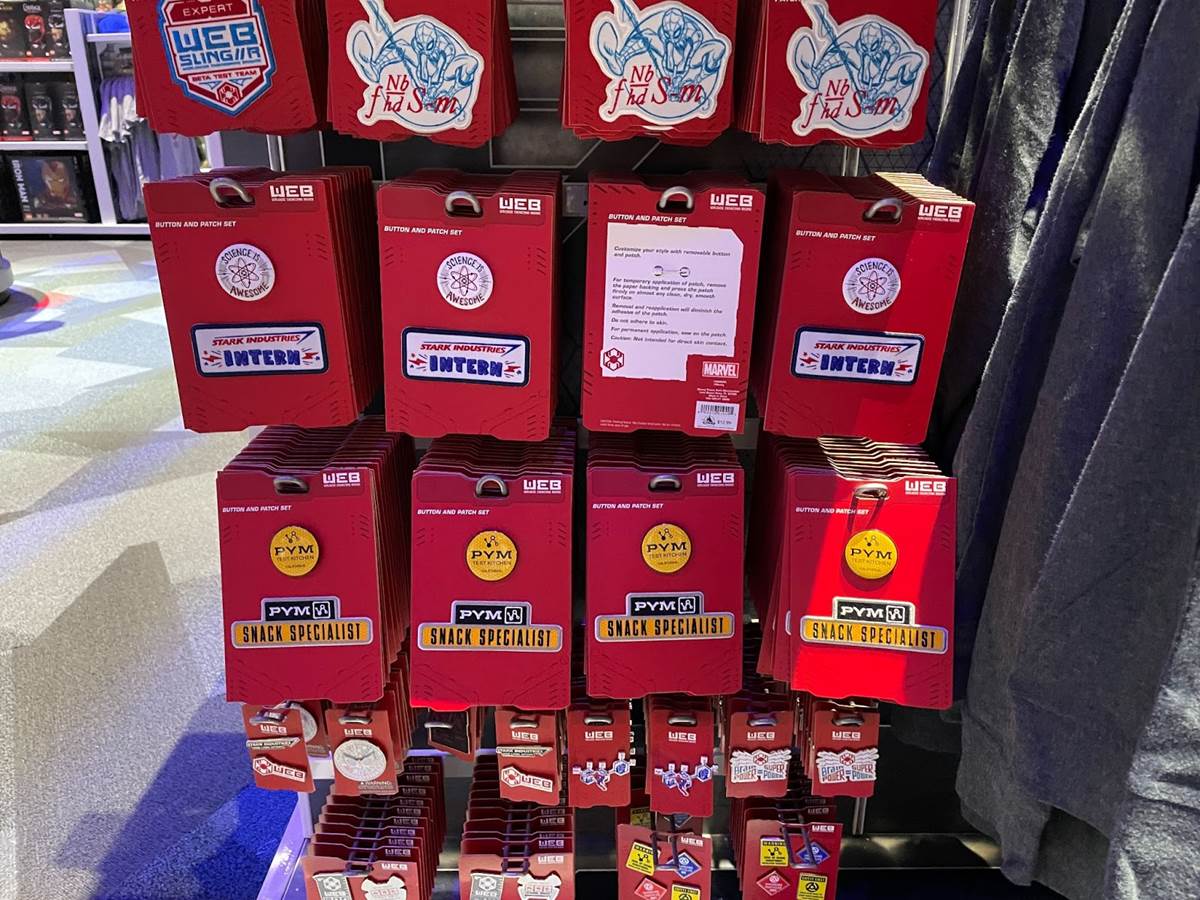 There’s also a collection of drinkware, including coffee mugs and glasses. From the Pym Test Lab, this set of four “toothpick holders” look like chemistry beakers. Stepping into the bigger world of Avengers Campus, anyone can be a recruit with apparel, a backpack, and a blanket themed to the land. You can also show off your recruit status with a light-up badge. 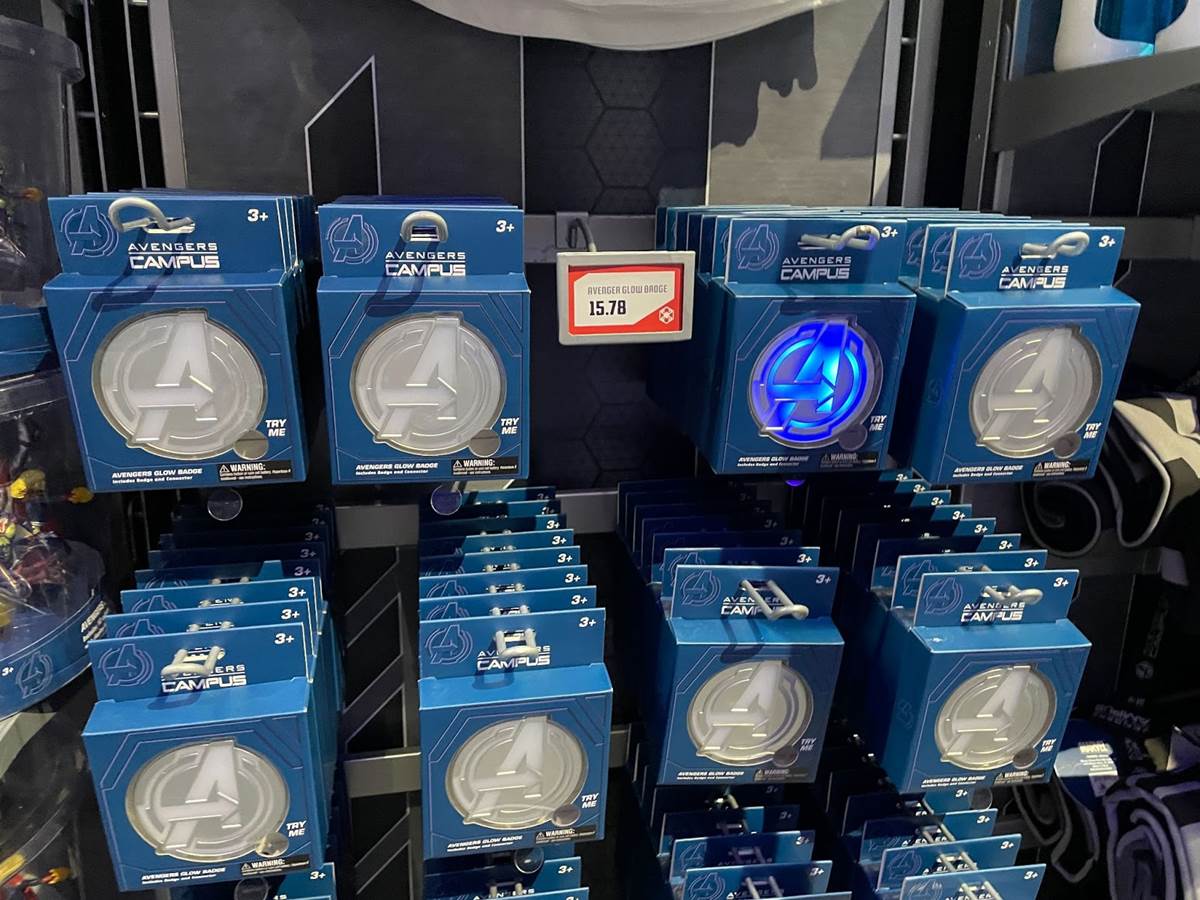 The Quinjet has landed! This one’s not for sale, though. These mini vehicles are, though, including the Quinjet, an Avengers Deployment Vehicle, and a Royal Talon Fighter from Wakanda. The rest of the store is full of previously available Marvel items, including high-end collectible figures, Hasbro Marvel Legends action figures and collectable accessories, and a life-size Iron Man that will only set you back $7,950. 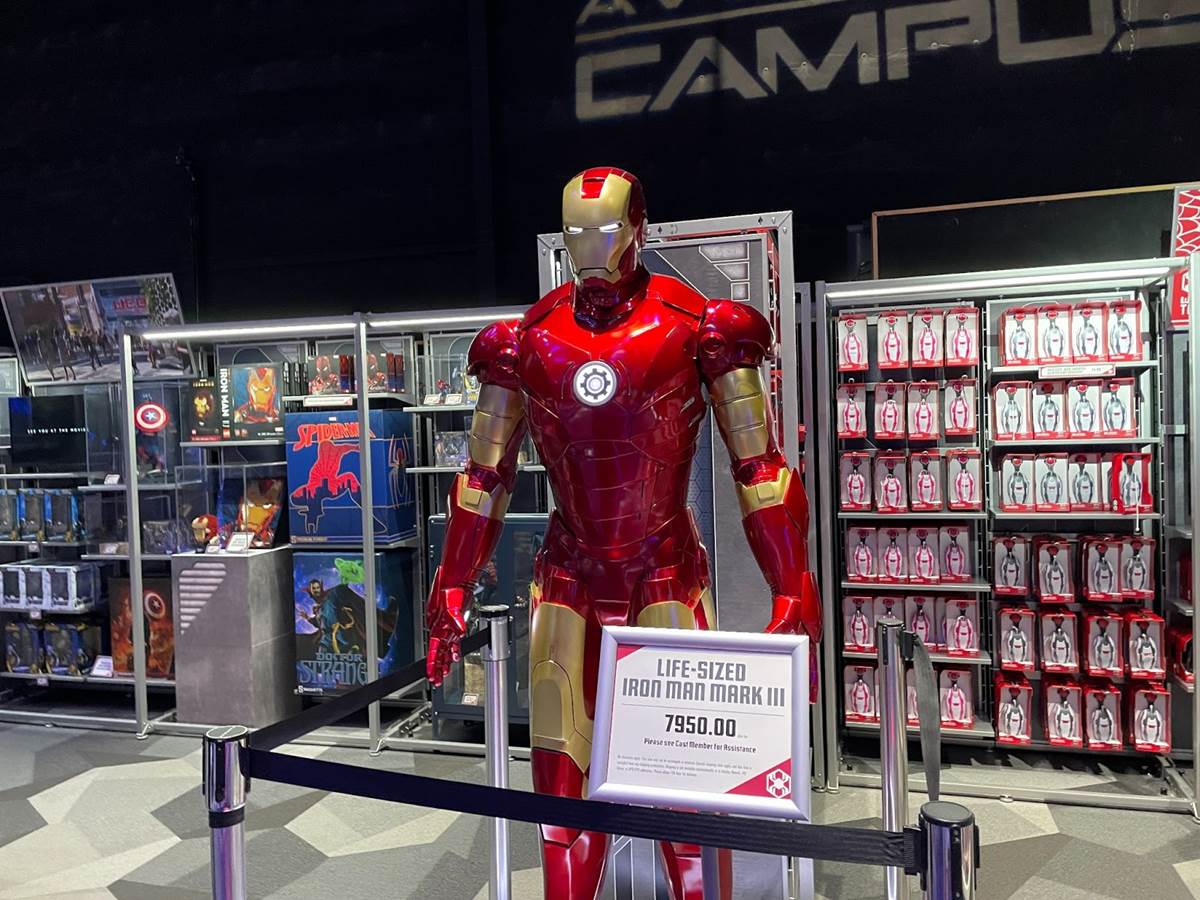 There are a few new arrivals to be found, including new Marvel Pandora charms. Premiering June 9th on Disney+, fans can get their Loki shirts, ears and pins right here. And before you reach the checkout line, check out D-Tech On Demand, with customizable mobile phone cases and magnets from the Marvel Universe (plus Disney, Pixar, Star Wars, and a collection of theme park designs). 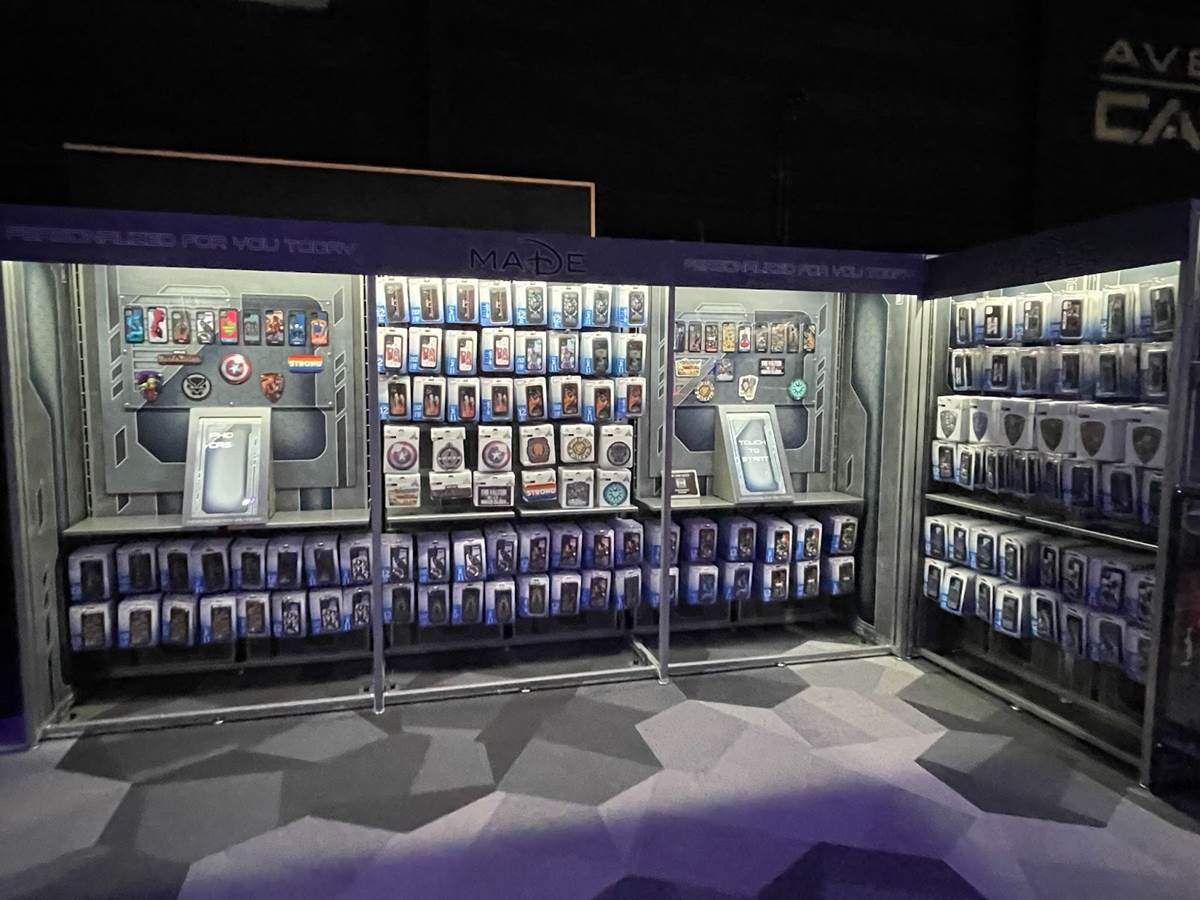 Until Avengers Campus opens, the Disneyland Backlot Premier Shop is the exclusive home for many of these land-specific items. However, just outside the shop in the Hollywood Backlot is the open-air Studio Store, where many of the WEB Tech items can also be found. You can watch our 4K video overview of the Avengers Campus merchandise below.