After leaving us on the edge of our seats at the conclusion of the series’ first season, The Owl House is back and bringing more adventure in the Boiling Isles with Luz, Eda the Owl Lady, King, and all the characters we’ve been introduced to over the last 19 episodes of season 1. 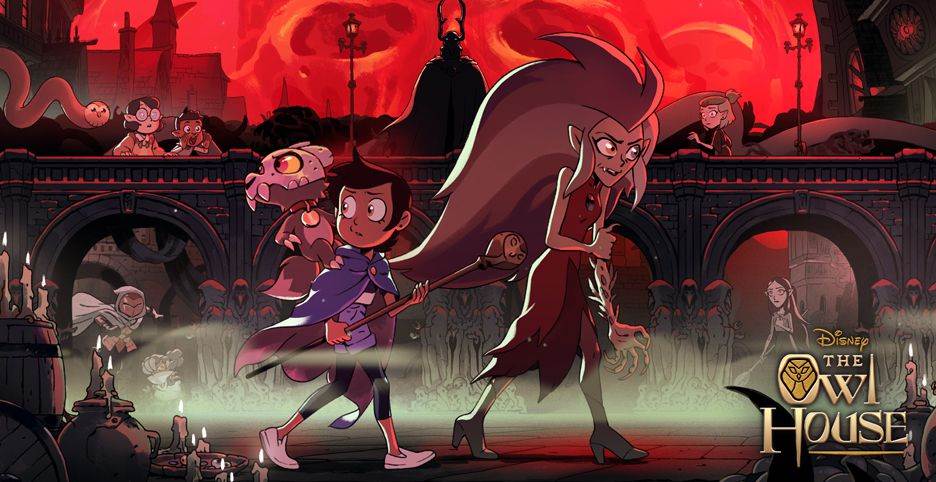 The cold open of this episode shows Luz with a subliminal aura of going rogue, but it is quickly revealed that she is merely bounty hunting to help make ends meet at the Owl House. We’re introduced to a similar (but different) title sequence than last season’s; this one with more of an emphasis on Luz’s friends, Gus, Willow, and Amity.

This episode then begins with a cell phone video from Luz to her mom, who seemingly has made other videos explaining her new life but it is also shown that the videos aren’t sending properly. This particular video is helpful though to new or casual viewers as it serves as a recap to the events of last season, briefly explaining the Boiling Isles, Eda The Owl Lady and her sister Edith (as well as their tumultuous past), their loss of magical abilities, and of course, their house demon, King, who doesn’t want Luz to ever return to the human realm.

At one point in the video, a piece of foreshadowing(?) that I really enjoyed, Luz says “This week we’re bounty hunters. Next week we could be anything!”

When Luz and the rest of the residents of the Owl House (which now includes Lilith) turn in their collected bounties and only get half a coin in return, they realize they must do something else. Eda tries to use her powers and fame as the legendary Owl Lady to get more money, but everyone knows that she’s powerless now, so they aren’t threatened or intimidated and when she tries to cast a spell and fails, one resident comments on how awkward the whole situation is. While they’re in town, some subtle exposition ensues pointing out a new statue of the Emperor, saying he is becoming more prominent now.

Lilith laughs and says at least her own image as the head of the Emperor’s Coven commands respect before we see it taken down and replaced by an image of the Golden Guard, whom she worked with at the Emperor’s Palace but was clearly favored since he was a “teen prodigy.”

While chasing fast cash bounties, including the most adorable 600.00 reward, Luz overhears Eda telling Lilith how dire their financial situation is, with the Bounty Hunting not paying the bills. Lilith asks for Apple Blood, and Eda explains that she spent all the money on Griffin eggs since there's not much in the Boiling Isles that Luz can actually eat.

Of course, Luz feels guilty for being a burden, especially because she is responsible for Eda losing her powers, and being the one that destroyed the portal to the human world so they can’t get the artifacts to sell. So she decides to take on the big bounty that she saw, the Selkidomus, and signs up to get on the ship. Interestingly, as she signs up, we see the Golden Guard looking down from above and nodding to the ship’s Captain.

While Luz impresses everyone aboard the ship, becoming part of the crew and using her magical prowess, King explores for more crackers, and stumbles into a cabin where he discovers the ship they are on belongs to the Emperor. Before he gets the chance to run out and tell Luz, the Golden Guard captures him.

Out on Deck, Luz uses her magic skills to try and capture the Selkidomus but the struggle becomes so intense that the entire crew helps take on the beast and becomes distracted while a ghost takes the bag of money. Luz goes chasing after the ghost (and the treasure) and discovers the Spector on the shoreline as a wave comes in and takes the money away, leading them both to scream “the money” when she realizes it's Eda in disguise.

The Golden Guard shows up on shore and threatens to arrest Eda and Luz if they don’t help him retrieve a Selkidomus for Emperor Belos, or worse, throw them into the literally boiling water of the Boiling Isles, also threatening the life of King (whom he thinks is just an annoying bird) in the process. Luz and Eda discover that the fierce Selkidomus is only protecting her baby and Luz teaches Eda how to use some glyph magic to create a giant plant in the shape of the creature to convince the Golden Guard that he had the creature.

As a reward for saving her and her baby, the Selkidomus rewards them with “the treasure of the sea,” not gold, but Selkigriss – something that people pay big money for at different markets.

While all this was going on, Lilith is still getting used to her lack of magical abilities and decides to try and make a potion for Eda so that together they can see into the Emperor’s Castle. But, she needs to find certain ingredients that are proving hard to acquire but not to worry, Hooty is on the case with her, much to her chagrin.

The relationship between the two eventually comes to a head, when Lilith erupts and says there’s no way that he can possibly relate to her struggle right now (lost without a coven or her powers) and prefers that he just leave her alone. Hooty, heartbroken, obliges, but still proves to her that he is a good friend and helps out on a dire situation. This forms one of the most unlikely bonds we’ve seen yet in the show, a friendship between “Lulu” and “Hootsifer”

At the end of the episode, Lilith shows off the Skrying potion to Eda and they spend time together watching the guards at the palace. As they get up (and the episode ends), the potion reveals Emperor Belos reassembling the portal to the human realm, turning and looking at the viewers (of both the potion and the show) and simply says “Knock, Knock, Human…”

Roll Credits! The credits are also new this season, showing off more of the world we have come to know from the series but told through carvings as opposed to the end credits of last season.

The season premiere of The Owl House, “Separate Tides,” is now available on Disney Channel and the DisneyNOW App. You can catch up with all the episodes of The Owl House season 1 on Disney+.