Marvel’s Loki impressed fans with its debut last week on Disney+ and the excitement level was very high for this week’s follow-up. After Loki was introduced to the awesome power of the TVA and found out he was recruited to help hunt… himself, he and Mobius got to work on tracking down this other dangerous variant. “The Variant” opens in a renaissance fair in Wisconsin, where a hunter and team of minutemen are responding to a nexus event. They quickly fall into this other Loki’s trap when the hunter is mind-controlled into attacking her team. The shadowy figure we saw last week also emerges to kill several minutemen. We then see them take the charge and drag the hunter through a time door.

Our Loki sits at a desk while Miss Minutes quizzes him on what he’s learned about the TVA. Loki, reading a magazine about jetskis, becomes frustrated and tries to hit the projection of Miss Minutes. She hops out of the way and eventually retreated to his computer. Mobius interrupts and calls him into action, handing him a jacket to wear.

Hunter B-15 briefs a team on their latest incident, the one in Wisconsin. Loki tries to play up his important before B-15 makes him show everyone that his jacket reads “Variant” on the back. It’s a move that is meant to remind Loki where he stands with the TVA, but really I think it’s bigger accomplishment is making all the viewers at home say “I want that.” 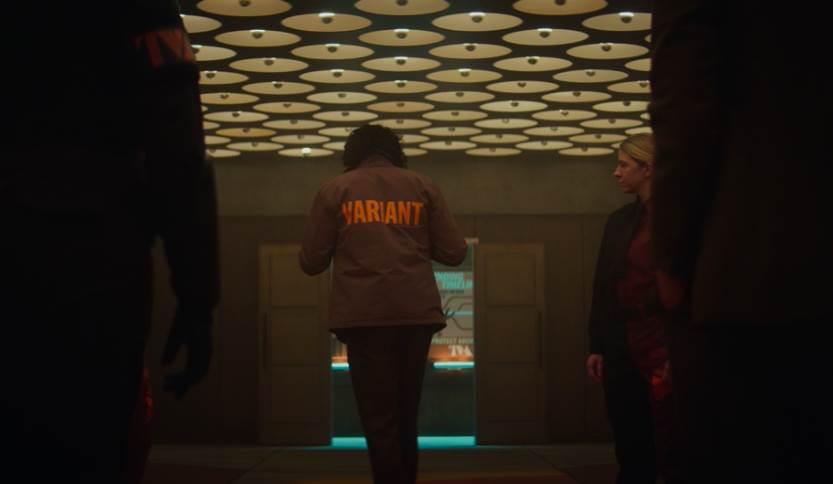 As they get ready to embark on this mission, Loki questions Mobius on why he isn’t concerned about Loki betraying him. Mobius explains that betraying them wouldn’t help him ad would get him no closer to an audience with the Timekeepers. Loki gets excited by that prospect and they begin their mission.

For a bit more time travel explanation, Loki asks why they didn’t just travel to just before the attack occurred and catch the variant then. Mobius explains that nexus event destabilize the timelines, a bit of a flimsy explanation but let’s go with it. He then questions if Loki watched any of his training videos, which Loki swears he has.

They examine the crime scene, where they find Hunter C-20’s helmet. Mobius points out that a variant has never taken a hostage before, once again pointing out how different this Loki is. They prepare to reset the timeline before Loki tries to convince them not to leave. He tries to explain that he sees this variant’s plan and stalls for time before Mobius eventually catches on to his game and has the team reset the timeline.

Mobius meets with Ravonna in her office. She tries again to convince him that working with Loki is a bad idea, which of course Mobius protests. Eventually, he convinces her to give him one more shot, but not before revealing he’s never actually met the Timekeepers himself. Their mystery continues to grow.

Loki tries to convince Mobius he was simply testing him to help him learn more about what makes Loki tick. Mobius, clearly getting annoyed with Loki’s games, tells him to stop talking. He tries to motivate Loki by pointing out that this other Loki is a superior version. Loki sees this as manipulation and refuses to take the bait. Mobius tells Loki he has one last chance and it involves him reading through case files and looking for details the TVA may have missed.

Loki gets bored reading the files and instead tries to pull some files on the creation of the TVA, which he learns are classified. A stingy librarian gives him the only files he can actually take out, which happen to be the variant case files he was supposed to be reading in the first place. While going through the files, he finds one on the destruction of Asgard, which elicits another emotional reaction out of the normally ice cold villain.

As he looks it over, he notices something and rushes to Mobius, who is eating lunch in a cafeteria of sorts. Loki explains that this variant is using apocalypses to hide because nothing they do will change anything because everything is about to be wiped out anyway. So by hiding out in these events, the TVA would never know the variant was there.

To test this theory, Mobius takes Loki to Pompeii, right before it is wiped out. Mobius tries to get Loki to make some small changes to monitor for variance energy but Loki goes rogue and tales everyone they’re about to die and he knows because he’s from the future. They don’t believe him because… why would they? Mobius sees that there is no variance energy and no branching in the timeline, proving Loki’s theory.

Mobius and Loki return to search through every sudden apocalyptic event that could serve as a potential hiding spot for the variant. After finding nothing for a while, they take a break and Loki asks about the jetski magazine and Mobius points out simply that “they’re awesome.” It leads to a conversation that allows us to see how sad Mobius’ life really is, with him being limited to his work for the TVA and never getting to really experience the great things life has to offer… like jetskis.

They also briefly discuss the believability of both of their stories. Loki again questions the existence of the “space lizards” known as the Timekeepers. Mobius points out that Loki came from a Frost Giant and was raised by the god of the gods in a magical golden city so really all of their stories are hard to believe. It’s a fun nod to the suspension of disbelief the audience has to have to enjoy the Marvel Cinematic Universe.

Their conversation makes Mobius realize something as they recall that he called Loki a scared little boy. He realizes that the scared little boy who gave him the Kablooie candy may have actually been the variant in disguise and he handed him a clue. They add the Kablooie to their equation which greatly reduces the number of apocalypses they need to explore. After just a few moments of looking, Loki finds a hurricane in Alabama in the year 2050.

Mobius convinces Ravonna to allow him to take an armed team into this event in Alabama to hunt the variant. Hunter B-15 again briefs the team on their mission, telling them to prune a Loki if they see one. We then see the team approach Roxxcart, a department store in which citizens are hiding out from the storm.

B-15 and Loki go in one direction while Mobius goes in another with the rest of the team. Meanwhile, the variant watches from the store’s security cameras and sets a timer for 20 minutes. Loki and B-15 find a citizen shopping and question him. When B-15 gets too close, he touches her wrist and we see some energy transfer from him to her as he falls to the ground. B-15 then reveals she’s being used as a vessel for the variant now. 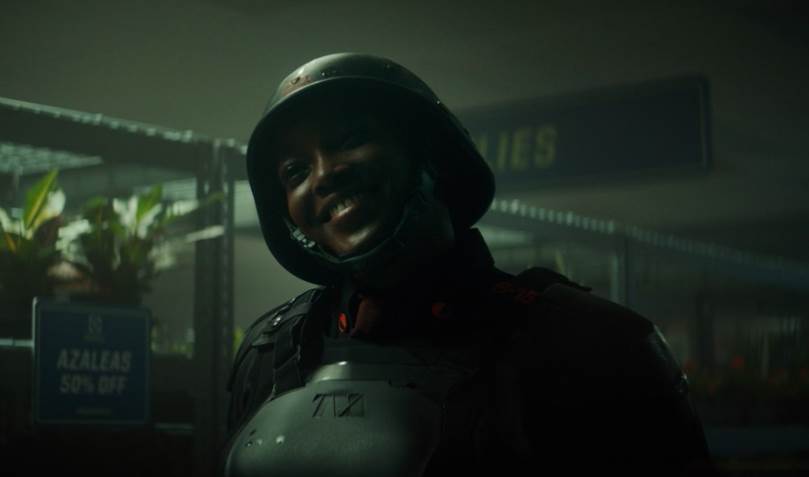 Mobius and his team come across the people seeking refuge in the store. One of the minutemen begins rifling through their bags, completely numb to how scared they all are. Mobius shows that he still has some humanity in him and reminds his team that the people shouldn’t be scared of them. Another minuteman enters and leads them to C-20, who is tides up and muttering “it’s real” again and again.

Loki and the variant make their way through the store, before the variant transfers from B-15 into a store employee, leaving B-15 unconscious. Loki tries to convince the variant, who doesn’t like being called Loki, that he is going to overthrow the Timekeepers and take over the TVA. He asks for help but the variant refuses.

Mobius tries to talk some sense into C-20 who tells them she gave away where the Timekeepers are and how to find them. An agent tries to get in touch with B-15 who of course doesn’t respond. Loki tries to get more information out of the variant before he notices a reset charge on the shelf and assumes the plan was simply to blow them all up.

Another man, the newest vessel for the variant, attacks Loki and gets the better of him. B-15 regains consciousness and finds Mobius and his team who are now frantically searching for Loki. The variant continues to set charge as Loki approaches again. The man drops and Loki turns to find the variant standing behind him, again in the dark robes. After a second, the variant lifts the hood to reveal that she is actually Lady Loki. time doors open under all of the reset charges and they begin to fall away.

At the TVA, things go haywire as the agents see the timeline begin to branch in dozens of places. One agents picks up a phone and begins to explain the situation before a second agent takes it and says someone just bombed the sacred timeline. Ravonna watches on a screen as the timeline branches before she picks up a weapon of the shelf and heads out. Minutemen scramble through various time doors as they try to respond to the situation.

Back at the store, Lady Loki picks up a device, opens a time door and walks through, leaving the door open behind her as Loki looks on. Mobius and the other agents arrive just in time to see Loki walk through the door and the episode comes to a close. Is Loki turning his back on the TVA? Or is he simply letting his curiosity get the best of him? 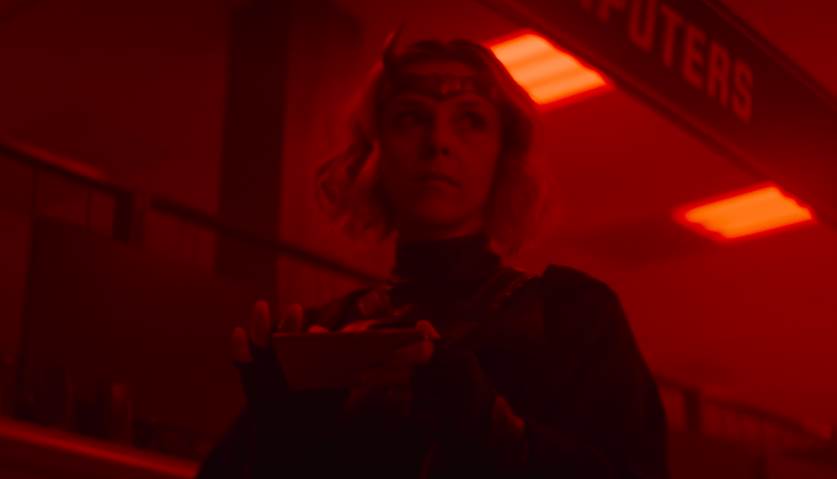 Last week, Loki gave us what was probably the strongest opening to any of Marvel’s Disney+ original series. Things only got even more fun with this week’s second episode. Another crazy twist had added a new layer to this show and it would appear fans are going to be in for a wild ride going forward. Hiddleston and Wilson continue to impress and now with Sophia Di Martino thrown into the mix, this cast just keeps getting better and better.