Freeform’s Motherland: Fort Salem has just returned for season two, and this year we’re going to recap every episode. While I’m familiar with witches on TV (big fan of Buffy the Vampire Slayer) I’m new to this show, so please bear with me these first few chapters. With that said, let’s jump into the show! 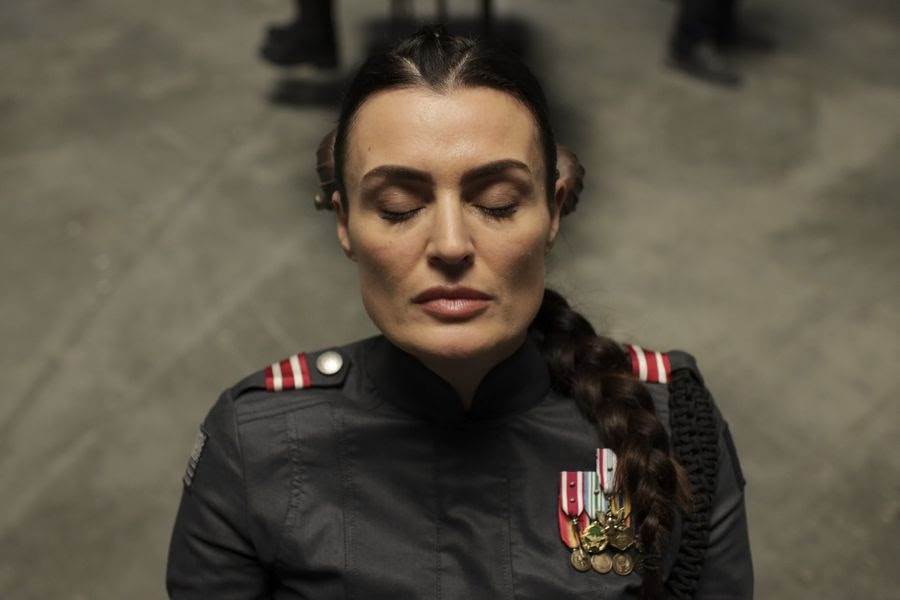 Please note this recap contains spoilers for season 2, episode 1 “Of the Blood.”

Season two opens at a civilian church where a teenage girl with an angelic voice—the Vice President’s daughter, Penelope Silver—is singing the beloved hymn “How Great Thou Art.” As she lifts up her song to the Lord, the stained glass window behind her begins to melt, and by the time she hits the last note, the entire window is gone. Is it possible that she has the gift?

Returning to our witches, we catch up with Tally who’s currently a Biddie, General Adler and the rest of the unit aboard a chopper as they head back to their home and military base. Meanwhile Scylla and Willa meet a diner and Willa states the attack on the Bellwether wedding wasn’t an act of the Spree. She shares a flashback with Scylla of a dinner party where Spree leaders are celebrating 61 new recruits when suddenly they’re attacked by a mole who releases a detonator-like sphere that unleashes a weaponized plague taking out everyone at the party. Willa says the Camarilla have returned and she wants Scylla to join her in hunting them.

Back at the base, the Witches gather to discuss the rise of Camarilla and the strong explosion that allowed them to get away. From what they can tell, the “blast zone” radius will have an unknown effect on the land and even more interestingly, while the radius is shrinking, it seems to be on the move? As for the Camarilla attack on the Spree, they stole the leaders’ voices, are they coming to do the same to the military? The group is interrupted by a young officer who shows them a news report of Penelope’s church spectacle and they’re determined to have her and possibly others tested and pledged before the Camarilla can do any more recruiting.

For anyone concerned about the fates of Raelle and Abigail, there’s no need to worry. Both girls are alive! As they head back home, they stumble upon a body covered, absolutely covered, in mushrooms (mycelium) that seems to be a result of their combined power. They argue about whether or not to tell Alder, but their discussion is cut short when they’re apprehended by a military unit. 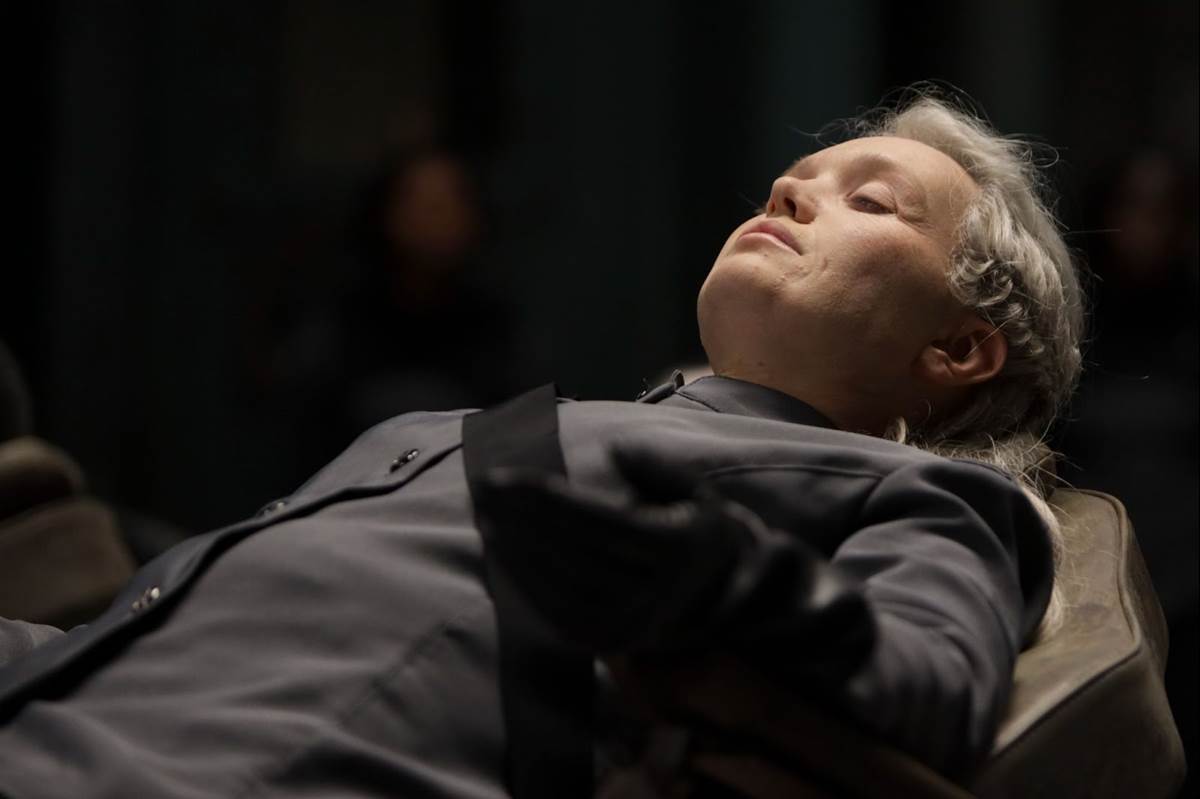 Tally in a ritual

As the duo heads back, Tally joins a ritual to disconnect her from General Alder and the other Biddies and emerges as her normal young self. The three friends reunite and discuss their respective experiences with Tally revealing how incredible it was to be connected to the other witches and how she could feel their thoughts.

In the morning, Raelle and Abigail have a conference with General Alder and almost immediately admit that the blast on the battlefield was them. Of course Alder wants to test what else they’re capable of. Abigail also pushes to know more about the Camarilla attacks considering her family was among their targets, but Alder won’t give answers and tells the girls she needs them to keep training. 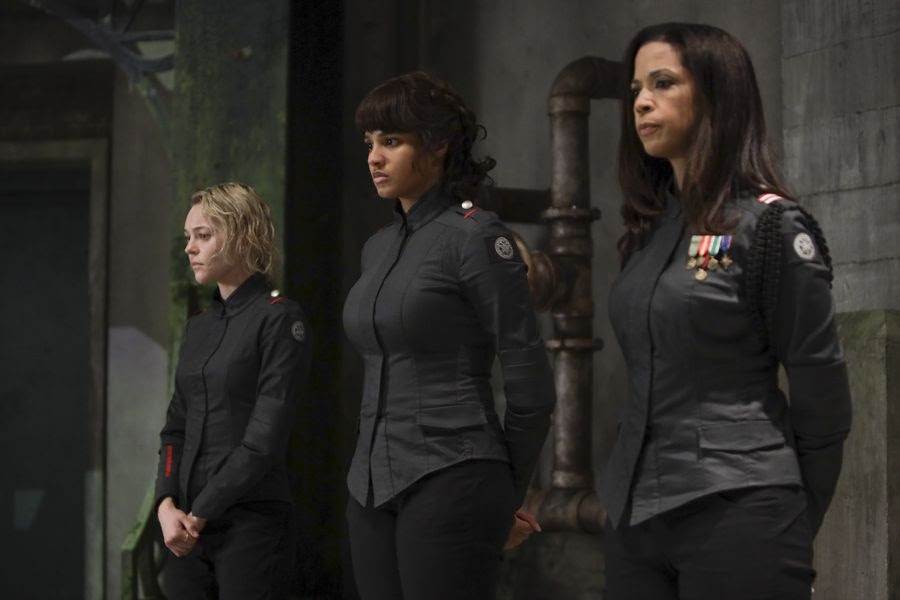 Having recovered from an attack by the Camarilla, Khalida is seemily back to normal and eager to return home, but her older brother Adil wants to stay saying he doesn’t want to run anymore. He’s also relieved that Abigail is back and safe. Khalida turns to Raelle asking if she can save her brother.  “He’s changing,” she says, “he’s seen too much suffering.” Adil does not belong in this place.

That evening Alder and the others come to check on Tally. She tells Alder she misses her, but the General tells her she’ll move on, even though the bond they shared will last forever. Tally takes this in stride but doesn’t seem completely convinced.

Against her father’s preferences, Peneople Silver comes to the base and takes the test proving that she is a witch. Alder is thrilled that she passes and Peneople makes her pledge. Elsewhere, Scylla and Willa go undercover at a protest in the same space where the Spree attacked 6 years earlier. After an impassioned speech from the protesters who are sick of the military not stopping the violence, Willa says, “Hate is a disease. Find patient zero.” Scylla turns to her and says she’s in. Back at the base, Sergeant Anacostia Quartermain comes to the trio (Raelle, Abigail, Tally) and presents them with medallions promoting them to War College. Tally is beyond thrilled screaming in delight and Anacostia jokingly is happy to pass them on to her superiors. Anacostia pulls out a flask and the quartet toasts to the future.

General Alder is spotted in her room contemplative and unable to sleep, while across the campus Tally is having a very vivid dream. The cadet finds herself with Alder and a group of witches in the jungle when they're attacked by an unknown enemy (Spree? Camarilla?) that calls giant sucker worms out of the ground. They fight off the monsters as best they can, but it’s not enough. Finally an unnamed woman smashes a bottle that releases an invisible force scaring off the worms and giving the witches a chance to attack. Tally wakes up screaming. Raelle and Abigail calm her down, but she keeps fidgeting. Raelle tells her it was just a dream, but Tally lifts her shirt to reveal a very real series of scars and marks on her stomach. What is going on?