Welcome back for another recap of Freeform’s Motherland: Fort Salem. The series is in its second season and this year, we’re recapping every episode. I’m new to the show, so please bear with me these first few weeks, with that said, let’s jump into the show! General Alder, Petra and other officials head to the Capital to ask President Wade to sign an order allowing for all females coming of age to be tested to see if they are witches. The Army needs more power to fight against the Camarilla and Alder believes this is the best way. President Wade along with Vice President Silver (Penelope’s dad) suggest that citizens will be outraged at such a move. Suddenly Alder stops speaking and Petra turns to see the witches chanting softly in unison. The President seems to have a change of heart and claims “young witches need to be protected” as she signs the document.

Raelle, Tally and Abigail walk to their next class and discuss their current challenges. Raelle is still undergoing testing and simultaneously struggling to speak a sentence in Mothertongue. As for Tally, she continues to wonder about the mystery woman from Alder’s memories. The girls arrive at their session and are greeted by the Impertrix or Matriarch of the Imperative—someone who oversees the continuation of the witch bloodlines. She approaches Raelle and calls her an “Outcross” which means one who’s crossed bloodlines with a civilian. The Matriarch is quick to insult both Raelle and Tally but offers encouragement to Abigail. The Matriarch tells the group of women they’ll be attending the Matrimonial Ceremony later in the week where they’ll be able to choose the men who will help to further their line.

Izadora wants Raelle to sing seeds and see if she can control the mycelium without being in extreme and terrifying situations. “You’re more than a conduit for her. She chose you to form a symbiosis with her,” Izadora says. She leaves and Raelle asks the mycelium why it chose her, and what it wants. The wall containing the substance begins to vibrate and small dust flecks make their way to Raelle's hand. She flashes back to a moment when Scylla sang a seed for a death cap. Raelle begins to sing the seed to the mycelium and solid tendrils emerge from the wall and wind their way over Raelle's body and into her mouth. Izadora hears Raelle struggling and runs to her aid, retrieving a small wooden box and opening it. It’s empty inside, but the mycelium pulls back as Raelle gasps for air.

Abigail has a private session with the Matriarch who wants to pair her with Gregorio but Abigail isn’t interested. The Matriarch says Abigail is just like her mother and when it was her turn to choose a man, they had to narrow her options down to three choices. Abigail asks if she can be extended the same courtesy, leading the Matriarch to sarcastically ask about the Earthquake boy—Adil. She tells Abigail she has eyes everywhere and asks if Abigail really thought she’d be paired with someone outside of the Army. She goes on to say Abigail will be “handfasted,” (essentially married) by the end of the year.

Outside of Fort Salem, Scylla and Anacostia are hanging out with Shane and Bonny and it’s clear the couple is not comfortable with witches. Bonny shares how she had to tell her daughter to stop hanging out with a friend, Tiffany, because it turns out that girl is a witch. Anacostia asks how they know and Bonny mentions a test. There’s a knock on the door interrupting the conversation and Bonny lets a man, Jack Orsatti, into the house. He’s the same man who gave Shane the wad of cash at the bar. Ana asks about him, and Bonny says they met at their first vigil and Jack helps to plan their meetings, calling him a “Godsend” and an outlet for Shane’s frustrations. Anacostia and Scylla learn from Bonny that Jack pays them to attend vigils and stir things up. Anacostia suspects that Jack is working with those higher up among the Camarilla. Scylla tells Anacostia that letting on they saw Jack at the bar wasn’t wise, suggesting the subtle approach might serve them better. The duo stake out Shane and Bonny’s until Jack leaves.

Back on campus, Raelle and Tally get a meeting with the Matriarch and she tells the girls she doesn’t know what to do with them, before saying she sees potential in Raelle. Raelle is quick to dismiss this, stating she has no interest in handfasting or men. The Matriarch warns she will fulfill her obligations unlike her mother who did not handfast properly. This upsets Raelle who gets up to leave. The Matriarch calls her an insolent child in Mothertongue. Raelle turns around and responds with an insult of her own, entirely in Mothertongue. Tally watches in shock and asks Raelle where that came from, but Raelle is just as surprised by her use of the ancient language. 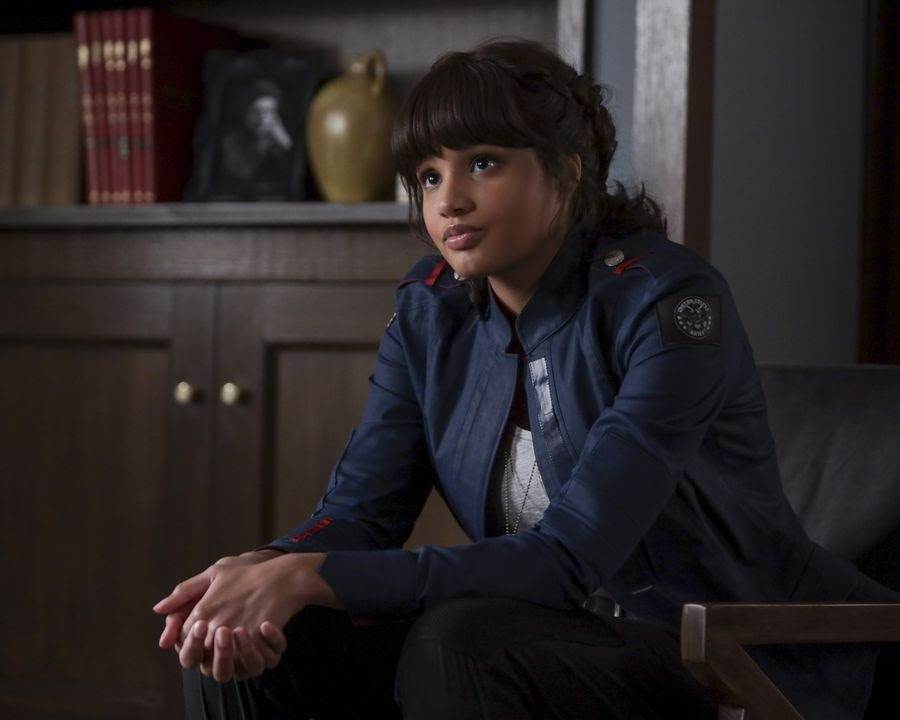 In War Game training, the unit practices hand-to-hand combat and Abigail is paired with Gregorio. Upset and aggressive, she quickly overtakes him and he asks if she’s mad at him. “I’m mad because of you.” she replies. Across the room Tally is paired with their leader M who bests Tally with a blade, then suggests they switch positions. Tally takes the knife but when she looks at it, it’s covered in blood. M checks to make sure she didn’t actually hurt Tally then pulls the knife back to examine it. There’s no blood. Tally looks dumbfounded.

Alder and Izadora call Raelle to the mycelium and open a box to let out a seed song. They tell her it’s from her and its thousands of voices layered on top of each other. Raelle is confused, she only has one voice. Izadora holds a device up to her throat and observes that the mycelium has “colonized her larynx.” Alder also comments on her sudden use of Mothertongue before asking her to sing again. She does, only this time more voices join in as the tendrils come towards her. She can’t hold the power for very long, but when she lets go, she breaks off part of the wall and sends a crack through the floor. Alder and Izadora are amazed that she can destroy matter too.

The next day, Scylla and Anacostia are still tracing Jack and follow him to four schools. Anacostia wants to confront him, but Scylla says he already knows who she is. Scylla pulls out her lighter and changes her face, then goes into the school. He and a woman are testing the hearing of a young girl, and the high pitch sound causes Scylla to lose control over her face, changing back to her normal self. Still she overhears the woman tell Jack they might get more positives when they test the older group next month.

Back at Fort Salem, Adil and Abigail observe some relics of history and Jem’s ability to make Working and Abigail questions aloud, breaking tradition. Adil speaks in defence of respecting one’s elders and tradition, but Abigail says that’s why his tribe was killed, they laid down and died instead of fighting the Camarilla. He’s offended by these words calling the attack an ambush and Abigail agrees. She also says maybe they should work to end a war instead of just manning up for the next battle. She wonders if someone could create another massive Working like Jem that would put a stop to the Camarilla.

Alder Takes Raelle to a private area of base where they can give unlimited space to test her powers far away from prying eyes. Meanwhile Abigail decides that she won’t attend the ceremony and tells Tally that something came up, but won’t elaborate, leaving Tally to attend the ceremony alone.

Scylla and Anacostia follow Jack to his next drop and wonder how far the Camarilla’s reach is. Scylla suspects they are testing children nationwide. Scylla gets out of the car to further inspect Jack, but he anticipates her arrival and attacks her from behind. He asks who she is, and Anacostia comes to the rescue stating “we are the enemy” in Mothertongue.

Alder has invited a group to observe Raelle including a member of the Hague and Vice President Silver. The Witches gather behind a barrier and seal themselves in a protective bubble while Raelle sings seeds with everything she’s got. The test goes off spectacularly and she manages to destroy more matter. As she falls to her knees exhausted, dozens of colorful mushrooms begin to sprout from the ground.

At the ceremony, Tally is distracted while talking to a potential mate and suddenly transitions into a vision with the mysterious woman from her dreams. Alder is calling the woman using the name Sergeant Nicte Batan. Nicte is crying and tells Alder “they’re killing themselves. You stole my work.” Alder tells her it had to be done and Nicte knew it, but a tearful Nicte states people had already surrendered. “Your heart is black, Sarah!” she calls as she runs off. 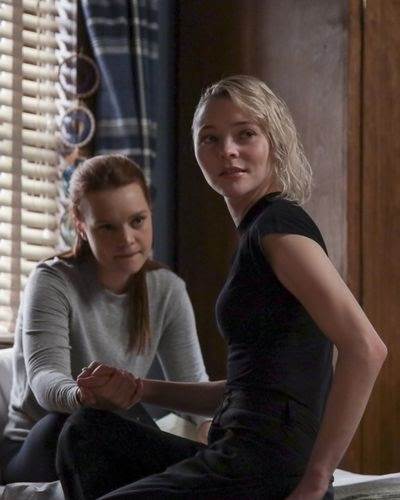 The next morning, without going into full detail, Tally and Raelle share with each other about their experiences the night before. Raelle asks about Abigail and Tally says she didn’t come to the reception. Outside their window, the sky becomes dark and clouded. Adil is walking outdoors and notices the abrupt change in the weather then runs to find Abigail. She’s in a clearing singing a series of low notes and manifests a two tail tornado. As she becomes suspended in the air, she struggles to hold on the phenomenon, and streaks of blood form in her mouth. Adil calls to her, but she can’t hear him. She falls to the ground and starts coughing. Adil rushes to her side and asks, “what did you do?” But she just stares up at him.