This is it. We’ve made it to the finish line for Marvel’s latest hit Disney+ series, Loki. We left off last week with Loki and Sylvie staring at the building where they hoped they would finally find the answer to who is really running the TVA. This week’s final episode provided some answers and all kinds of new questions. 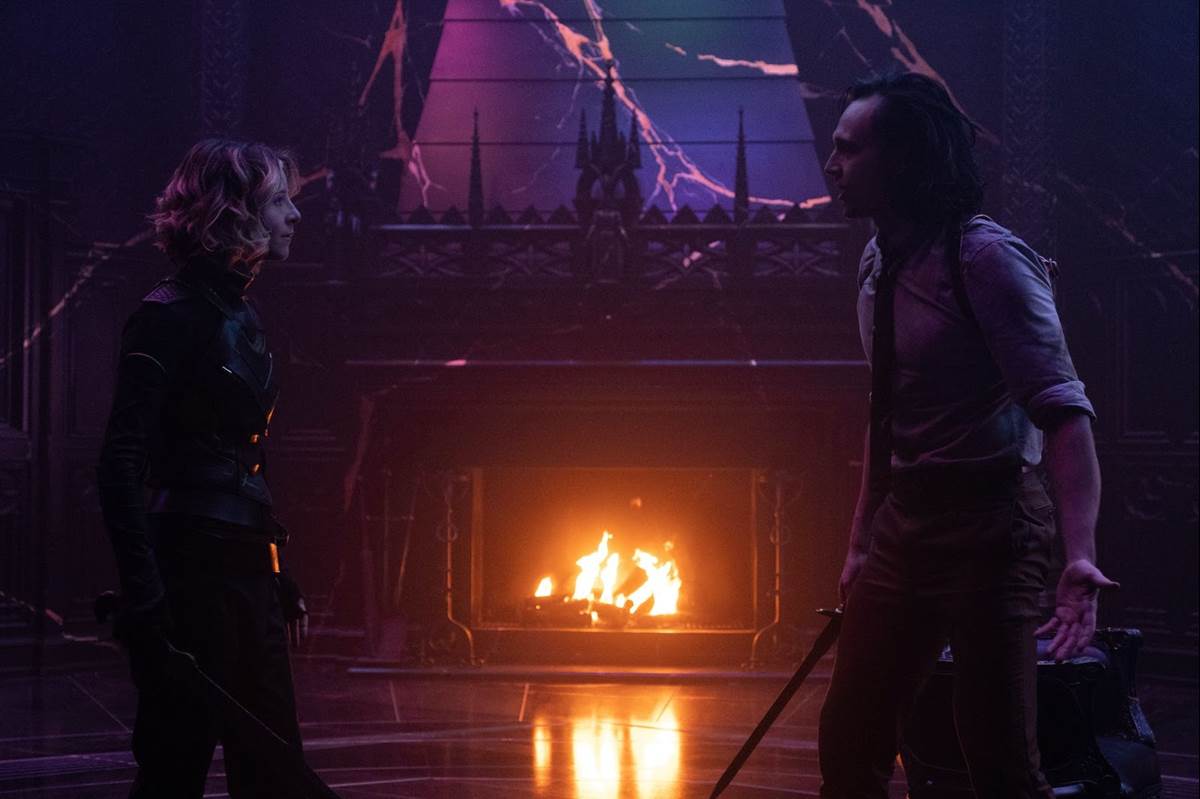 The episode opens up with the Marvel scroll, only instead of the typical fanfare, we hear clips from throughout the MCU from seemingly every character, overlapping into a jumbled mess until we see space and a galaxy and what appears to be a representation of the actual timeline. Finally, we see Loki and Sylvie standing in front of the mysterious building.

They hesitate to go in and discuss whether or not Sylvie should kick the door in. Before she works up the nerve to do so, the doors open on their own, welcoming them in. As the stare down the grand hallway of this building, Miss Minutes pops up, startling them. She welcomes them to “the Citadel at the end of time” and tells them “he who remains” is impressed. She also offers them a deal that will allow them to go back into the timeline together if they allow the TVA to keep doing its work. They call their potential lives fiction and refuse the deal.

Miss Minutes pops up in Ravonna’s office and shows her some files. Ravonna says they’re not what she asked for and Miss Minutes tells her “he” thinks they’ll be more useful. Ravonna asks her who she’s talking about. Miss Minutes ig nores the question and disappears.

Loki and Sylvie make their way through the citadel and question if this mystery person is really still alive. A door opens slowly and they see a man sitting in an elevator. It’s our first look at Jonathan Majors, who we learned would be playing the iconic Avengers villain Kang the conqueror in Ant-Man and the Wasp: Quantumania.

We never actually hear the name Kang in this episode, but we’ll refer to him as such unless we learn otherwise. Kang is quite a departure from his comic book self. First off, he appears human and not the hulking blue figure we know from the comics. Second, he is much less serious here and actually jokes around with Loki and Sylvie. This makes sense, as another big, powerful villain who is unwilling to show any bit of humor would likely have been a tough sell right on the heels of Thanos. 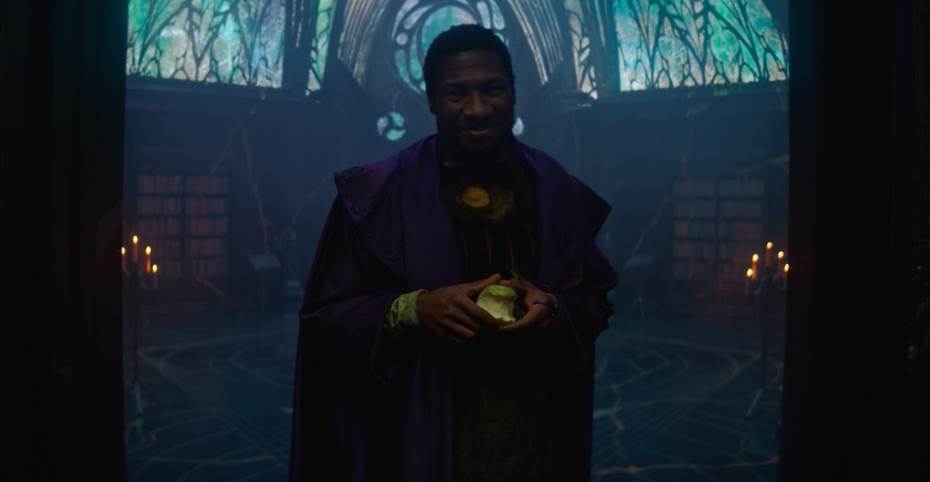 Loki and Sylvie get on the elevator with Kang and when Sylvie tries to attack him, he teleports behind her. They repeat this process a few times before he eventually teleports out of the elevator and the doors open to show him standing on the outside. He casually pours them each a tea or coffee and offers them a seat.

In the TVA, Mobius arrives in Ravonna’s office, much to her surprise. She calls a hunter to them but Mobius tells her they’ve exposed her secret. We then see B-15 being tracked by another hunter in a school in Ohio in 2018. The hunter corners her in an office and she tells him to just wait. Ravonna walks in and questions them, only it’s not the Ravonna they know. This is Ravonna before she was taken by the TVA as a variant. B-15 tells the hunter they have a lot to talk about, hence them exposing the big secret of the TVA.

Back in the citadel, Kang continues to speak casually with the two Lokis. Sylvie tries again to attack him, and again fails. Kang shows them a document with the entire conversation they’ve had to this point and tells them he knows exactly what’s going to happen. He’s been using a TemPad to teleport whenever they attack him and he has it pre-loaded with every move he needs to make because he knows every move they’ll make. He assure them that every step they took was set up by him.

Ravonna and Mobius debate whether or not the TVA is necessary. Ravonna argues in favor of stopping the chaos that would ensue with the elimination of the TVA while Mobius wants free will for everyone, which the TVA doesn’t allow. Ravonna opens a time gate to leave and Mobius threatens her with a pruning stick. She very easily dispatches him but this time spares him another pruning and walks through the gate. She tells Mobius she’s going “in search of free will.”

Kang continues to tall the Lokis about the truth of the TVA. They ask him his name and again he passes on the opportunity to say Kang, but does say he’s been called a “conqueror,” so we were very close. He tells them about how he was the one to discover the multiverse and he met with variants of himself. While there was a peace for sometime, some of his variants wanted to conquer other realities which led to a multiversal war. In order to stop this war, he harnessed the power of Alioth to create the void and eventually the TVA, leading to the sacred timeline. This is a nice way to set up the multiversal war we know will be coming to the MCU with films like Doctor Strange in the Multiverse of Madness and Spider-Man: Now Way Home.

Kang also says to the Lokis, “if you think I’m evil, well, just wait till you meet my variants.” Perhaps this will not actually be the MCU’s version of Kang. We might be dealing with a much more malicious and serious variant of the character in future projects.

Kang adds more weight to the situation by proposing the idea of them accepting this control or killing the dictator and letting something much worse fill the void. He tells them their options are to kill him and deal with the infinite Kang variants that follow or to simply take control of the TVA and run it themselves. He tells them he will give up control to them because he is old and tired.

As he tries to explain to them they can do these horrible things for a good reason, he notices distant rumbling. He informs them that they’ve crossed the threshold into time he’s never experienced before and he no longer knows how things are going to go. The timeline begins to branch as Loki questions Kang on if this is really their choice. He gives them their options again and tells them what will happen if they kill him. He assures them he’s not manipulating them and passes off this device to them, literally handing them the power.

Sylvie lunges at Kang again but Loki stops her. He tries to tell her he believes Kang and is worried about what will fill the void if they kill him. The two of them actually begin fighting, physically, over what they should do. Eventually, Loki stops Sylvie from trying to kill Kang again and after he assures her he’s not after a throne, they finally kiss. However, Sylvie uses the moment to push Loki through a time gate and back into the TVA.

She turns back toward Kang, picks up her sword and tosses his desk to the side. Kang simply laughs and accepts his death as she plunges her sword into his chest. Kang looks Sylvie in the face, says “see you soon” and winks at her before he dies.

In the TVA, Mobius and B-15 watch on the monitor as the timeline branches out of control. Other agents in the control room do the same without any reaction. Loki sits, distraught, before deciding to do something about what just happened. He rushes through the halls before he finally finds Mobius and B-15. He tries to tell them they’ve made a mistake by freeing the timeline. He tells them about Kang and the citadel and everything they’ve been through. He warns them that someone is coming and a war is imminent. Mobius asks Loki what he’s talking about and makes it clear he doesn’t even know who Loki is. Loki realizes something is wrong and he looks out into the TVA to see that the giant statues of the Timekeepers have been replaced by one of Kang. 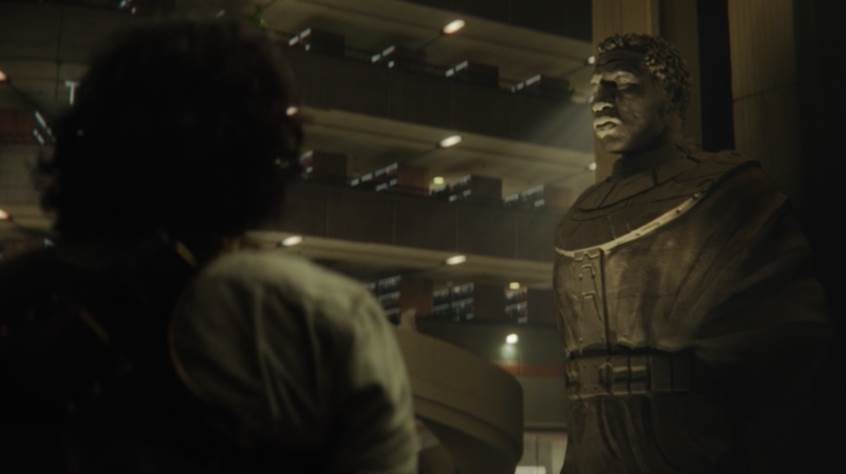 The episode doesn’t quite end there though. We do get another mid-credits “scene.” Although, it’s not actually so much a scene as it is a promise of a second season of this series. We see Loki’s case file for a second before a stamp hits it, leaving a marking that reads “LOKI WILL RETURN IN SEASON 2.” No further information has been shared on season 2 at this time.

This was a fantastic ending to a series that has kept viewers on their toes the whole way. It managed to give fans exactly what they were expecting to get, with Kang the conqueror being the one behind the TVA, and yet still deliver a shocking cliffhanger ending, with Kang’s death and the multiversal war on the horizon. Plus, knowing a second season will be coming is an exciting surprise. However, I wouldn’t be too surprised if the next step in this story comes from a different project first.

You can now watch all of Loki season one on Disney+.