The episode that would surely sell all the plush toys is here, as the latest episode of The Owl House sees Luz trying to find and adopt her own life long friend in the form of a palisman. 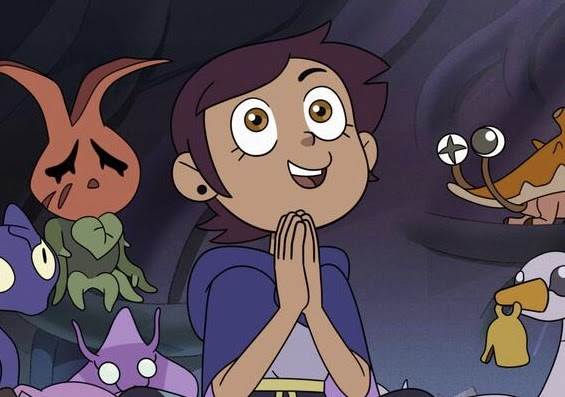 At the Emperor’s Palace, the heads of each of the covens are meeting with Emperor Belos to unify, promising that as their covens grow, they will be able to keep the realms free of wild magic. As he is explaining though, we learn a bit more about Belos as he clutches his chest and is taken away by the Golden Guard. Similar to Eda, he seems to transform into some kind of beast but controls it, breaking a witch’s staff to absorb the power of the palisman and heal himself. He tells the Golden Guard he needs more, but is told the unfortunate news that their reserve has run dry.

Belos also calls the Golden Guard “Nephew” and hints that wild magic is responsible for what is happening to their family. Outside the door, Kikimora hears most of the conversation and starts scheming.

At the Owl House, Luz (rightfully so) is trying to get her new pet echo mouse (that she acquired last episode) to spill more of the knowledge that was eaten out of the diary. Eda comes in and reminds her that she needs to go to school today because today is the day the students get their staff, complete with their own palisman. But as we learned earlier, there’s a shortage of palistromwood to carve the animals from. However, Eda has partnered with the Bat Queen for a new idea, a palismen adoption day! Though, it seems more that the palismen seem to be the ones choosing who they want to adopt.

Every student seems to get their own palismen, except for Luz, who desperately tries to get one to pick her but nothing seems to work. Defeated, she returns home where she discovers that a little red cardinal palisman has followed her, though it didn’t choose her, so she returns to the school with it to return it to their nest (still on loan from the Bat Lady). Using this time to her advantage though, she climbs into the nest and spends some time with the palismen to see if she can get one to pick her. After a bit, she starts to fall asleep and is awoken by the movement of the nest being lifted off the ground by the Golden Guard. While confronting him on board the ship, a substantially larger dragon creature interferes and takes down the ship.

Upon waking up after the crash, Luz learns that Kikimora summoned the beast in an attempt to take out the Golden Guard, but he is still alive (without a mask) not too far from her so she goes over and explains what’s going on. They soon take off through the city of Latissa trying to find authorities to get the Golden Guard back to the palace, but other scouts don't believe that this kid is who he says he is, and Luz refuses to give him his staff so he can’t prove it. We then learn that the Golden Guard is powerless without his staff.

Luz initiates a truce to work together to stop Kikimora, and they work together and form glyphs to create a sleeping mist. The Golden Guard gets excited about the glyph magic saying he’s read about it in books, but soon stops himself and says that this magic is banned for a reason. Luz jumps at the chance to talk to someone other than Lilith from the Emperor’s Coven before The Golden Guard explains that he is in fact a powerless witch and needs his staff that the Emperor gave him, saying that a lot of his ancestors were powerless too. The cardinal palisman has been with them this whole time and is hanging out around the Golden Guard scaring him because he knows they are made from wild magic.

They set out on their plan to take down Kikimora by putting her and her pet beast to sleep to rescue the palismen. As they get them to land safely, The Golden Guard turns (predictably) on Luz who plans on taking them all to be sacrificed for the Emperor. Luz begs and says she thought they could have been friends, but it turns out no matter what, he’s still just The Golden Guard. He then turns off his staff and says “My name is Hunter” but just when we think there might be another truce formed or they may work together, Kikimora, dazed, fires a spell and hits Hunter in the head, though she has no idea who she is fighting she justs knows that someone is there.

Hunter and Kikimora get into a battle with their staffs, rivaling some Star Wars films. The whistle Kikimora controls is lost and picked up by Luz, who hops aboard and steals the palismen to return them to the Bat Queen safely. As she takes off, Hunter looks up but does not pursue.

Back at Hexside, the Palismen are returned safely but the cardinal informs the Bat Queen that he has made a selection, and heads off on his way. At the Owl House, Luz is sad, determined to get her own Palisman when Eda shows up with King and gives her a piece of Palistromwood that they “retrieved” from a local garden club so she can make her own palisman.

At the Emperor’s Palace, Belos is guilting Hunter for failing him. On the way out, he runs into Kikimora, who is shocked to see him still alive. Hunter, knowing what she has tried to do, says it looks like she had a rough night with a knowing grin, but Kikimora sees the damage to his hair that she remembers causing to the mysterious stranger and seemingly puts it all together. Up in his quarters, he knows that he can help the Emperor if he can use a bit of wild magic, and we discover that the cardinal palisman had chosen him, becoming a new staff for Hunter.