This bulk of this week’s episode of The Owl House is mostly about Gus, but gives us a little bit of quality time with Amity and Luz, and a world we need to see more of thanks to an echo mouse. 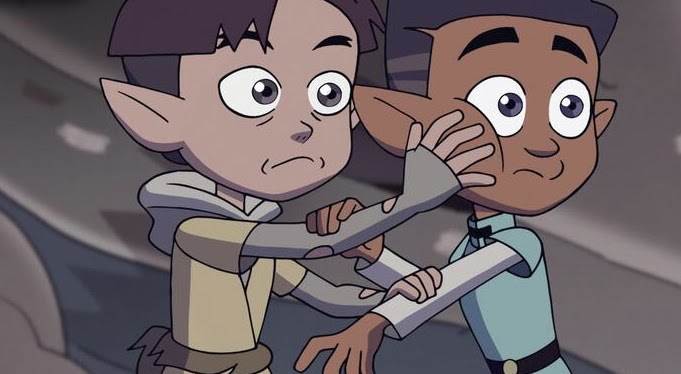 Through the Looking Glass Ruins

Gus is feeling down after an illusion he cast went awry and ended up harming his friend Willow. Even after multiple get well soon illusions that he sent to her, Gus feels like an illusionist like himself can’t do anything great, regardless of how great he is at performing this unique magic.

While wallowing, Luz comes over to visit Gus but really just needs his library card so she can go visit Amity….and do a little research and look for a journal she learned about last week.

While walking through town, the two see a small child in harm’s way and a group of magical students come in and save the day in the most heroic of ways. The students are from another school, Glandis, and who else is part of this gang, but Mattholomew, who viewers may remember as the transfer student who came to Hexside and tried to usurp Gus’s spot in the human club, getting the two trapped in detention later in that episode.

Mattholomew had acquired a map to acquire the legendary galderstones, powerful stones that will amplify magic spells. The group invites Gus to join them on their quest but “Matty” doesn’t want him there since he’s only an illusionist and will hold them back. As Gus tries to retreat anyway and go help Luz (who was hiding thanks to an invisibility spell we know she learned earlier this season), he is encouraged by his friend to go with them and hands him a stack of glyphs to “help prove that jerk wrong.”

Their destination: The Looking Glass Ruins. On the way there, Gus learns more about the group he’s traveling with, getting to know his new friends, and approaching challenges on the way. Gus jumps in and saves the day to show he is more than just a worthless illusionist and uses the glyphs that Luz gives him to obliterate all the obstacles. When Mattholomew gets wrangled up in a vine and starts panicking when another in the group says “no wonder you couldn’t handle Glandis.”

Gus asks what this means and Bria, leader of the kids, explains that the school is run by the strong and weaker students are pushed aside. That’s why they want the Galderstones. The stones will make them more powerful and they can take their place as the stronger students. The group arrives at the Looking Glass Ruins, and Gus quickly realizes that it’s not ruins, it's an illusionist graveyard, and those stones are not for the taking. The kids panic when the legend of the guardian turns out to be true and a creature comes out of the mist to challenge them.

Gus, out of glyphs, decides to use an illusion to frighten the guardian and poof! The guardian is gone, and the keeper of the looking glass graveyard appears, happy to see another illusionist, and explains that since the stones do nothing for illusionists, it is them that have always been entrusted to protect the stones. You know, kind of like how Gus was just doing before he learned all this. Once Bria discovers that the guardian is the work of “just another useless illusionist” she goes full villain and traps Gus and the Keeper so they can collect the stones.

One of the other kids steals a stone right out of Matty’s hands and says “we’re playing by Glandis rules, you can have whatever you want as long as you’re strong enough to take it.” Matty looks over and apologizes to Gus saying he didn’t know she would do this, and saves him while also giving him words of encouragement. If a “worthless illusionist” can save a jerk like him from a man-eating detention pit (callback!), then he can’t be that useless.

Inspired, Gus and the Keeper team up to teach the kids a lesson and save the stones. Using their illusionist powers, and the personal knowledge that Gus had learned about them on their journey, he plays to his strengths and gets a little personal to trick the students and scare them away.

The keeper debates hiding the graveyard for good, but Gus is worried about all the history that would be lost. Matty jumps in and suggests that they come on the weekends to help fix up the place and restore it. Does this mean Matty and Gus are friends now?

At the library, Luz discovers that one Phillip Wittebane had donated his personal diary to the library, so she goes to Amity to help her find it. She encounters the Blight twins who subtly encourage Luz to work with their sister, knowing the relationship between the two is growing. Luz explains the diary to Amity, and they figure that something that old must be in the “forbidden stacks” a large chamber with ancient books that she shouldn’t be going in to, yet her staff card grants her access.

Inside the Forbidden Stacks, Amity explains that they shouldn’t be here, and that her boss is usually nice but this would get them “fed to the bookworms.” In a cute moment, Luz explains that in the Human Realm a bookworm is what they call nerds, not like the Boiling Isles, where it’s probably some kind of hideous creature, and tells Amity that she hopes to one day be able to show her around her world. That was all Amity needed, and they set forth to find the diary.

The pair are successful, and when they open the journal, they discover a mouse that has been chewing through the book leaving most of it unreadable, prompting Luz to scream out calling it a rat and revealing that her and Amity had been in the area they are not supposed to be. Amity of course, being the one who gave them access is in trouble and she was right. Her boss is friendly, but she definitely got fired for that. Upset, she asks to be alone, explaining that being around Luz makes her do stupid things (Luz says she does too) and that she just wants to go home. Luz says something her mother usually said to her, and turns and heads back into the library.

At the Blight house, Amity is with her siblings and while her sister is brushing her hair, she shares that everything has been different since Luz got there, explaining how confused she is, but her sister says that’s not a bad thing as she was never this happy before. Pointing out that her roots are growing out again and she might need to re-dye it, Amity takes the opportunity and changes up her hair, taking it to a lighter shade of purple and maybe a little shorter too.

Luz shows up at their door and rambling through apologies and what she did, explaining that she got Amity’s job back, she stops dead in her tracks and says that she loves the new hair. Amity points out that a mouse had followed her and it turns out it's an echo mouse, the one who ate the diary, and can playback all the knowledge it literally consumed.

The mouse becomes a projector and plays a vintage piece of footage from the diary (I can watch some of this in every episode, let that be clear) saying this is the first entry of the diary. Told mostly in silhouette, we learn about Phillip Wittebane and explains that he is beginning a journey to harness the powers he’s learning in the demon realm and build a portal back to his world. The clip ends and Luz says that she hopes she and the mouse become good friends. Amity says that shouldn’t be a problem since she has a way of getting into people’s hearts and kisses Luz on the cheek. Audiences everywhere cheer because….FINALLY.

This episode of The Owl House is now available on Disney Channel and the DisneyNOW App.