And we’re back for another recap of Freeform’s Motherland: Fort Salem. It’s Halloween and the Coven at Fort Salem participates in a ritual that will let them talk to the dead. Outside of the campus, Scylla and Anacostia attend a party with Shane. Ready? Let’s jump into the show! 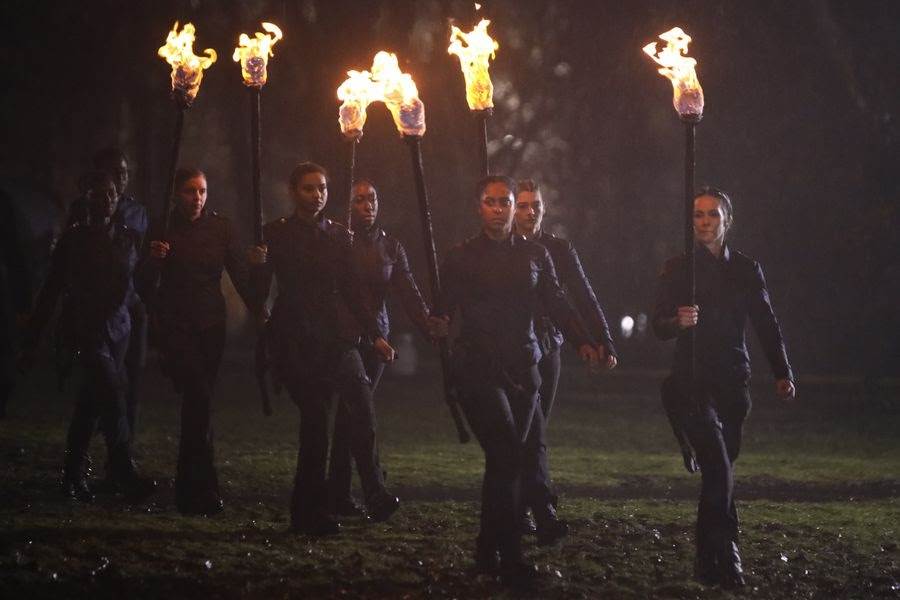 Kahlida and Adil are traveling by train with two members of The Hague who are inviting the siblings to make India the new home for the Tarim. Kahlida is curious about what they want in return. As the quartet discusses these matters they are served appetizers and tea. The General lifts her teacup to take a sip, and inky black tendrils begin to crawl up the cup. Her assistant and the siblings try to stop her, but the Plague is too fast. Adil and Kahlida make a run for it, but the powerful substance is right behind them growing larger by the second and derailing and destroying several train cars.

Back at Fort Salem, Tally confronts Alder about Nicte staining that she knows Nicte served with her in Liberia. The General denies being on that assignment, but Tally tells her she can edit photographs and history books, but she knows the truth. Alder admits that losing Esterbrook and her rebels in the Martyrdom was one of her deepest regrets and as things grew chaotic, she didn’t feel it was prudent to mention her involvement. As for Nicte, she deserted shortly after and the General regretted that too. Alder then asks why Tally felt she could barge into the quarters in the middle of the night seeking answers. Tally says they’re still connected and she keeps having these memories. Alder sternly and coldly tells her Izadora will give her something to ensure the connection is severed.

Raelle asks Anacostia if she knew Scylla had escaped and while Anacostia prepares to hedge, Raelle says she saw her at the testing center. Anacostia confirms that yes, they knew and right now her being on the loose is helpful to the military. She does not mention that they’ve been working together. Raelle shows her the picture and asks how she got it, but Anacostia won’t say.

At lunch Tally tells Raelle she almost didn’t want to take what Izadora gave her, but she also wanted this confusion with Alder to stop. And she seems certain that the General isn’t telling the whole truth. Abigail joins them and they talk about the upcoming dinner to celebrate Samhain (End of Harvest/Halloween). Raelle asks about the black chairs being placed at the tables and Abigail says it's for the dead to join. But she thinks the idea is stupid, because the dead don’t actually care about any of this being that they’re dead. Gregorio interrupts their conversation saying he’s sorry to Abigail which she thinks is in regards to the attack, but he corrects her and says India. The trio is confused. Gregorio reveals to them that there was a Camarilla attack on a government train, the one Adil was on. A devastated Abigail flashes back to dark moments in her past and says “it’s never going to stop.”

In Alder’s office, Petra and the General look at photos of the train attack, and Petra tells her the Indian government has already publicly announced it was the Camarilla. Petra asks if Alder has briefed President Wade of the attack, but she dismisses this saying the Commander is still under the weather. Petra’s face changes as if she doesn’t fully believe her, but quickly readjusts. Alder tells her to get the Vice President up to speed, reminding her that his daughter is one of theirs and they need as many allies as they can get.

Anacostia and Scylla head to Shane and Bonnie’s to meet up for a Halloween party. Bonnie and her daughter Brianna greet the ladies with Shane close behind. Bonnie says she isn’t joining them, but taking Brianna trick-or-treating instead. The young girl asks if Tiffany can come too, and Shane says she’s still on vacation. Shane tells Bonnie to only trick-or-treat on one block, then escorts the witches to his car.

An emotionally defeated Abigail struggles at sparring allowing her opponent to overtake her. Raelle and Tally watch from the sidelines and follow her as she walks out. They offer to come home with her on fall break, but she says they’re not safe there, they’re not safe anywhere. As they talk, their Coven comes walking around the corner holding torches. The trio has no idea what’s happening, then they spot Gregorio. He motions for them to be quiet and tilts his head inviting them to follow along. 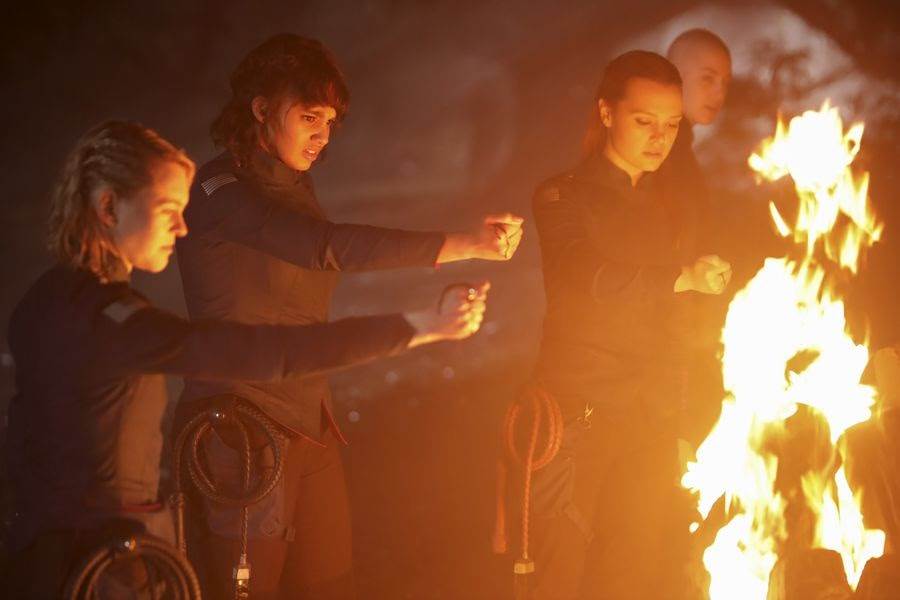 The Coven arrives at a large fire when M calls to order a Samhain ritual. She says “the veil is thin” as she holds up Raelle’s hand and slices across her palm with a blade. “Tonight we wake the dead as our ancestors have done for centuries.” M tells a story of the Lost Regiment, a group that was attacked when they lit one fire to survive bitter temperatures in the middle of winter. Giving away their location to the enemy they were swiftly attacked and no one survived. Now, the Witches perform an annual ritual with the goal of keeping the flames lit until midnight. If they succeed, they can speak to any dead witch of their choosing.

Shane, Scylla and Anacostia arrive at their party. Scylla realizes they can’t do any Work and Anacostia says they’ll improvise. Shane casually mentions how great this is and that the Camarilla take care of their own. He mentions that the group has investment bankers, real estate, schools, and they have the support of police and judges. The witches thank him for the invitation and regret Bonnie’s absence, but Shane says she’s not cut out for this, she’s too weak. However he believes Scylla and Anacostia will do what it takes to have a world free of witches. As they head in each guest grabs a stark white theatre/mime mask. Scylla doesn’t recognize many people from the movement and wonders how Shane got on the list, he says he offered a gift that they’ll see later on.

Back at Fort Salem the Coven works to ward off arrows from their invisible attackers and keep the flame alive. Gregorio takes a hit to the shoulder and Raelle helps to fix him. Raelle manages to work her magic and once he’s okay, she runs after the mystery attacker. With just a few bells to go until midnight, she sings a low seed and knocks a shadowy figure over. They lose one final arrow that hits the fire…right after the final bell.

At the Camarilla party, Scylla and Anacostia observe the leader, Exarch, wearing a dark red mask. He removes the covering to reveal his face, and Scylla recognizes him as a cop from the testing center. He says this evening they are bringing back an old All Hallows Eve ritual. The guests turn to look and clear the way as a masked Shane leads a young girl to the stage. Anacostia realizes that this is Tiffany and she was his gift. Exarch unveils a wooden post with a rope and hook and attaches it to Tiffany's bound hands. Anacostia tells Scylla she’s going to kill the power and to grab Tiffany and run. While most of the guests are busy watching the ritual, someone does spy Anacostia and Scylla.

Anacostia finds the electrical room and the breaker box, but she’s not alone, Jack has found her and they start to fight. Scylla can’t wait any longer for Anacostia and commands Exarch to stop. She offers to take Tiffany’s place stating she’s a witch, but not only that, she’s Spree, she’s killed thousands of civilians, and she enjoyed doing it. Exarch is amused and says Tiffany can watch as they deal with Scylla and notes that her vocal chords are ripe to harvest. Suddenly, Anacostia cuts the power and Scylla can now attack. The guests scramble away and Scylla goes up to Exarch holding her lighter up to his face. But it doesn’t change, it burns and Scylla breathes in the smoke. The witches grab Tiffany and leave. 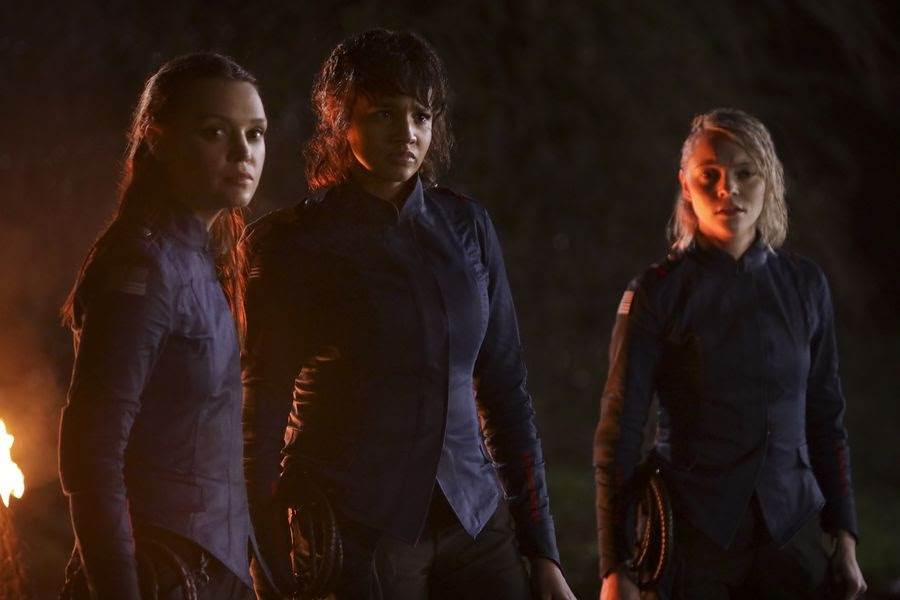 Having successfully kept the fire burning all night, the Coven returns to the campus and M gives them each a candle. Everyone goes their separate ways to talk to the dead witch of their choosing. Raelle is going to talk to her mother; Tally Valda Esterbrook; and Abigail wants Charvel. Raelle lights her candle and her messenger goes to retrieve Willa, but no one comes.

Charvel appears as she looked upon her death. Abigail apologizes for failing her, but Charvel says Abigail failed herself. She’s allowed herself to be hunted by the enemy. Abigail says they used Charvel to lure her, but Charvel says they preyed on her insecurities. She tells her to get rid of that which frightens her. “You’re the last of our line. You’re Abigail Bellwether and you are vengeance.”

Tally speaks with a bloodied Valda and asks why their Coven martyred themselves. Valda says they didn’t do that to themselves then Tally slips into Valda’s memory of the night they died. Barricaded in the church as Alder and the military arrive, Esterbrook addresses her group and says they have no choice but to surrender. An object flies in through one of the windows crashing to the ground and releasing a vapor. Suddenly all of the Coven raise their weapons and kill themselves. Valda screams, but even she can’t fight it, reaching for her blade and plunging into her stomach.

The next morning, the trio gather before leaving on fall break. A heartbroken Raelle wonders why her mother didn’t come and Tally suggests to Abigail that she come with them. But after her visit from Charvel, she has renewed energy and sense of purpose. Petra comes to speak to Abigail and tells her that Adil is here. He and Kahlida were the only survivors of the train attack, and while she stayed with the Hague, she knew he needed to see Abigail. Abigail tells him the Camarilla attacked her family again and she’s more determined than ever to make the Camarilla the ones who are hunted.

Back in their suburban home, Bonnie comes to check on Shane who’s still in bed. She comments that Brianna has gone off to school but left her favorite pencil behind. She then climbs onto the bed and Shane turns to face her. She asks about Tiffany not being back at school, but he tells her he is sure she’s fine. Bonnie leans close for a kiss and softly chants “not our daughters.” She then stabs the pencil in Shane’s ear, killing him. She leans back and holds a lighter to her face to reveal Scylla. Scylla slips out of the house just as Bonnie is returning home. She tells her to find something beautiful to live for, like her daughter. If she doesn’t, the hate will destroy her. Bonnie doesn’t know what to make of this, but smiles and walks into the house. Scylla walks away as Bonnie lets out a scream.