The mysterious Force-adept character named Sly Moore, often simply referred to as “the Umbaran,” was first introduced in the 2002 film Star Wars: Episode II – Attack of the Clones, and later she stood alongside Emperor Palpatine as he claimed control of the Republic, declaring it an Empire in Episode III – Revenge of the Sith.

In subsequent years she had a somewhat larger role in the Star Wars Expanded Universe (now known as the non-canonical “Legends” chronology) and more recently has become a fairly regular presence in the third volume of Marvel’s Star Wars: Darth Vader comic book, set between the events of The Empire Strikes Back and Return of the Jedi. In Darth Vader #14, out today as a tie-in to this summer’s ambitious War of the Bounty Hunters crossover event, Moore takes center stage. In last month’s issue of Star Wars: Darth Vader, the Dark Lord of the Sith went up against assassin droid IG-88 during his quest to reclaim the carbonite-frozen Han Solo– as part of a gambit to lure Vader’s son Luke Skywalker back into his grasp. What we didn’t know at the time was who exactly was behind hiring IG-88 to attack Vader, and today’s installment fills in those blanks for us in intriguing detail. We see Administrator Moore, having been demoted to taking care of Imperial busywork, plotting against Vader and manipulating Grand Vizier Mas Amedda in the process. Moore meets with her cabal of dark-side acolytes on Coruscant, where the issue catches up with the end of the previous one. IG-88 shows up to report his own defeat at Vader’s hands, but the meeting is short-lived before the Dark Lord himself shows up to wreak havoc with his unlikely new right-hand man Ochi of Bestoon. We also find out more about just how exactly Moore, Ochi, and Darth Vader come to arrive at crime syndicate Crimson Dawn’s clandestine auction for that famous carbonite block, as seen in the main War of the Bounty Hunters miniseries. 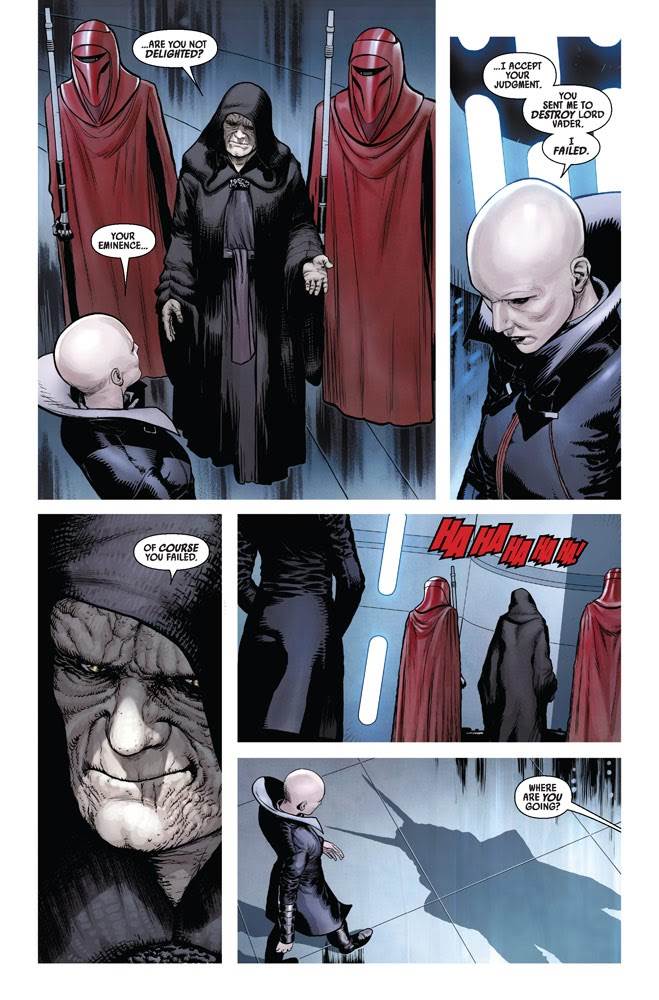 Writer Greg Pak is still at the top of his game in plotting out these stories and penning dialogue for the characters involved, and artist Rafaelle Ienco is doing a similarly wonderful job conveying the kineticism of Vader’s attacks against Moore’s minions, not to mention poor IG-88– who has a tendency to survive even the most devastating of attacks, so I don’t think we’ve necessarily seen the last of him. I liked getting inside the Umbaran’s head as an outside influence on Palpatine and his cronies, but I do have to wonder what the long-term plan is for this particular character. I also found myself surprised at how many alien beings were depicted as being officers in the Galactic Empire, as previously it’s been made pretty clear that those examples were few and far between, which is what makes Grand Admiral Thrawn’s admission the ranks and swift rise to power so impressive later on in the timeline. And once again it’s just a tiny bit frustrating that all of this month’s War of the Bounty Hunters tie-ins seem to end with Vader arriving at the auction, but I guess I just have to accept that the overarching narrative isn’t going to actually move forward until August.