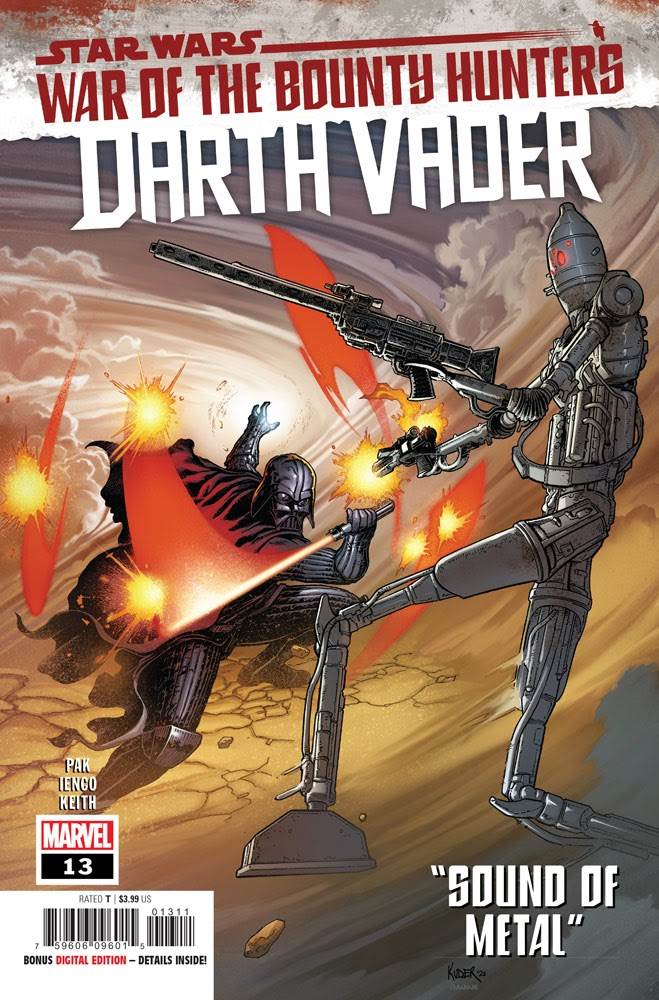 It says a lot about the enigma that is the cult-favorite character of assassin droid IG-88 that up until recently I wasn’t sure if he was supposed to be “alive” or “dead” in the post-Empire Strikes Back era of the current Star Wars canon. I remembered a quote from either Dave Filoni or Jon Favreau saying they were originally going to feature IG-88 (instead of his assembly-line cousin IG-11) in The Mandalorian, but didn’t want to invalidate the scene in which the droid is spotted propped up against a Ugnaught workshop wall on Bespin’s Cloud City, seemingly deactivated.

Regardless, it seems ol’ IG-88– always one of my favorite blink-and-you’ll-miss-him background characters of the Original Trilogy– is fully functional, considering he shows up to wreak mechanical havoc between the events of Empire and Return of the Jedi in this month’s issue of Marvel’s Star Wars: Darth Vader comic book, out today from writer Greg Pak and illustrator Rafaelle Ienco. Darth Vader #13 picks up where the last issue left off, with the titular Dark Lord of the Sith seeking to track down the carbonite-frozen Han Solo, believing his would-be-Jedi son Luke Skywalker wouldn’t be too far behind. Vader and Ochi of Bestoon have traveled to meet with the somewhat off-puttingly buff Bokku the Hutt in order to gather more information on Solo’s whereabouts, and the Hutt takes them to a deep-space droid outpost in what turns out to be a trap for the Sith Lord. Meanwhile, Vader is still haunted by red-tinged flashbacks of recent events in the Jedi-formerly-known-as-Anakin-Skywalker’s life, such as the duel with his former master Obi-Wan Kenobi and his humiliation at the hands of his current one, Emperor Palpatine. Ochi and Vader go up against the Droid Crush of Bestoon, who are working alongside IG-88 at the behest of an unknown employer– revealed in the issue’s final pages– and the Dark Lord must prove his mettle as his machine parts begin to fail him during one-on-one combat against the infamously deadly droid. Greg Pak is making a valiant effort so far of tying in Darth Vader into this summer’s Star Wars: War of the Bounty Hunters crossover event, though it still strikes me as a little funny that Vader is so vehemently pursuing Han-in-carbonite so soon after freely allowing Boba Fett to take his prize from Cloud City. I guess suffering an emotional loss in a lightsaber fight with your estranged offspring can change your mind pretty quickly about something like that, but it still feels to me like a fairly flimsy excuse for the Sith Lord to join in on this It’s a Mad, Mad, Mad, Mad, World-style hunt for that carbonite block. I did quite enjoy seeing Vader and IG-88 go up against each other in this way, especially when we discover how the droid ever-so-briefly gains the upper hand in the battle. It’s an entertaining outing, and I like the continued unlikely pairing of Darth and Ochi enough that the issue coasts by on their interplay. I have to wonder what Vader’s endgame is going to look like at the conclusion of this arc, but I also trust in Pak’s skill to make it interesting. 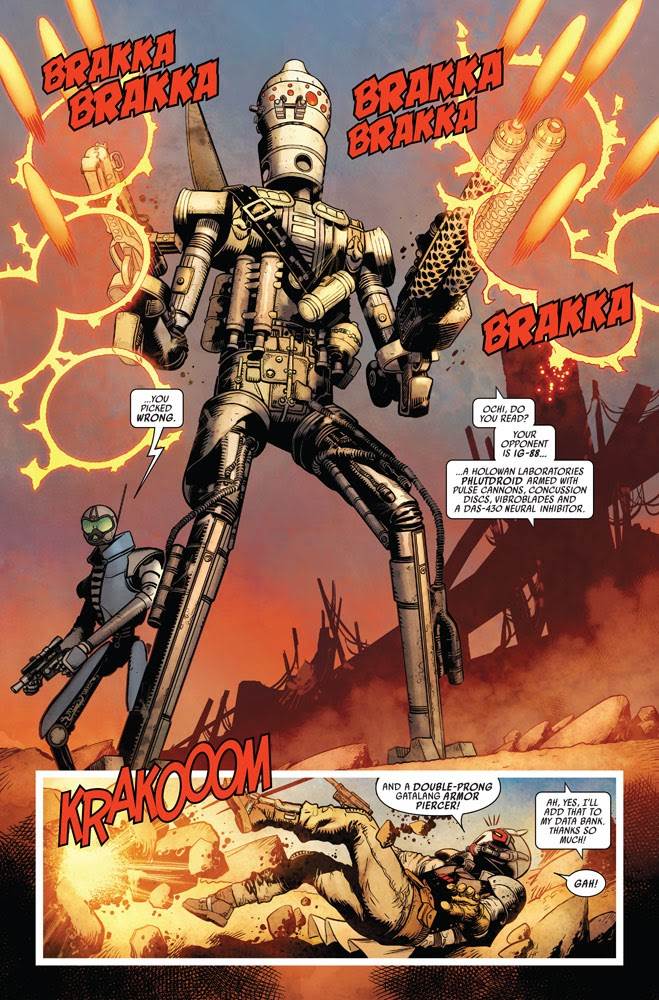