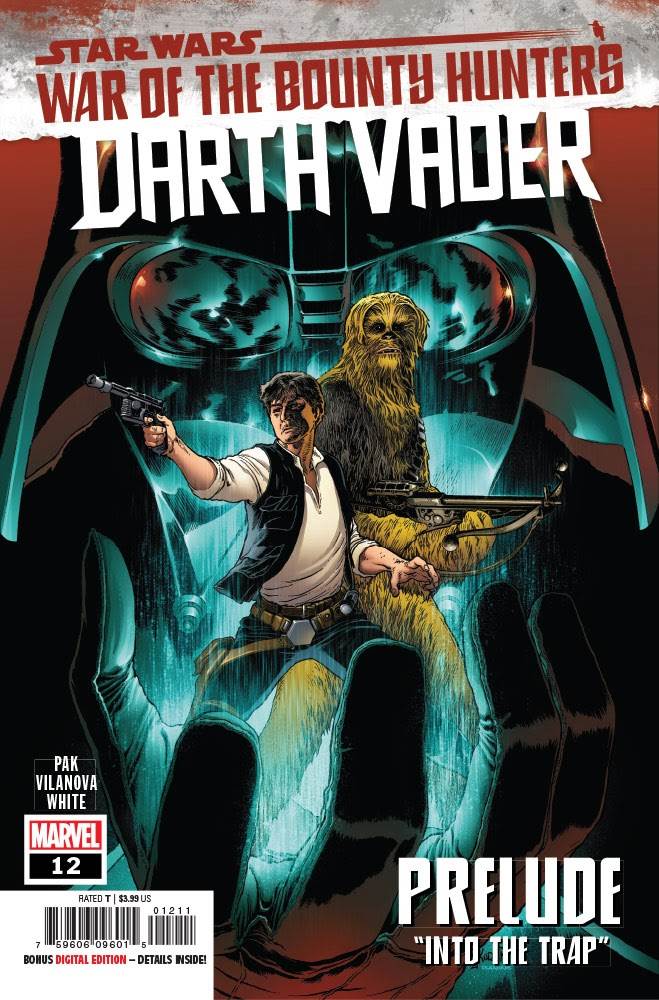 The relationship between Darth Vader and Han Solo isn’t one that we think about a lot. They aren’t blood relatives (that we know of, but this is Star Wars we’re talking about, so who really knows), and Han isn’t a force user so he tends to run in different circles than the Dark Lord of the Sith. But, as writer Greg Pak’s Star Wars: Darth Vader #12 reminds us, these two vastly different characters have crossed paths on a number of occasions and have affected each other’s destinies in a variety of ways.

Darth Vader #12 (titled “Into the Trap,” which just makes me think of one of my absolute favorite tracks from John Williams’s amazing score for Return of the Jedi) serves as a Prelude for Vader’s role in the current War of the Bounty Hunters crossover event running through many of Marvel Comics’ Star Wars titles this summer, and the issue is mostly about the Sith Lord Formerly Known as Anakin Skywalker considering Han Solo’s impact on current galactic history. 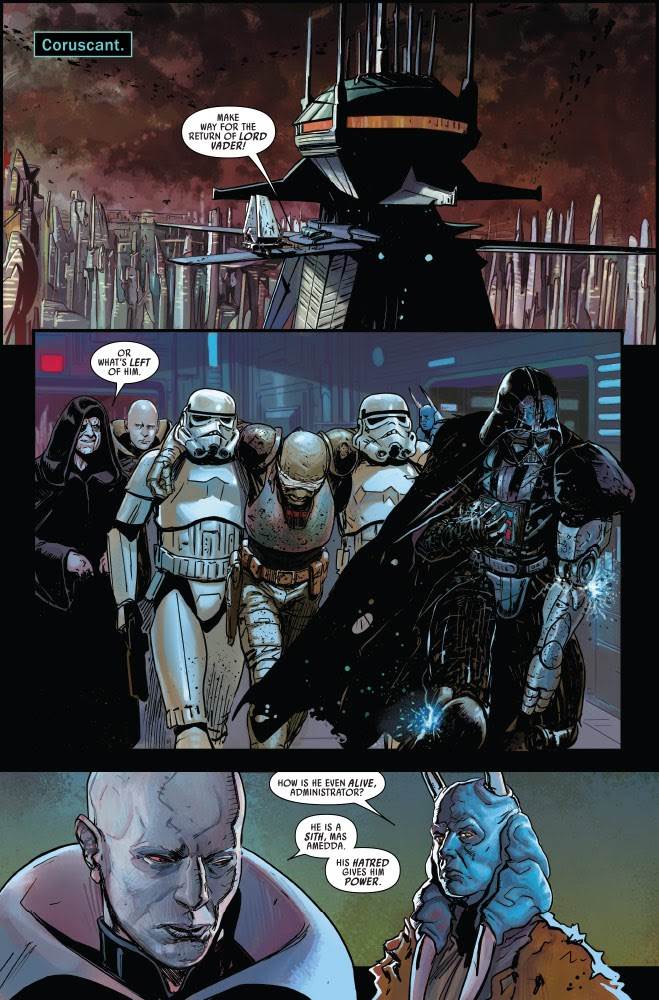 The issue opens with Darth Vader and Emperor Palpatine returning to the Imperial capital on Coruscant after the harrowing events of the previous arc, with Vader looking much worse for wear. Palpatine orders his underlings to repair his apprentice’s cyborg suit and restore him to his former glory, now that Vader has come back around to being the emperor’s lackey in the wake of visiting Exegol and getting a taste of what ol’ Palpy has in store for the galaxy. Vader elects to undergo this surgery without anaesthesia or being put under, and it consequently triggers a series of memories from recent events like the Death Star battle over Yavin IV, the hunt for the Millennium Falcon as depicted in The Empire Strikes Back, and even circumstances we hadn’t seen play out before, like the Dark Lord running into Han and Chewbaca on Corellia– where they somehow managed to evade Vader’s grasp once again. 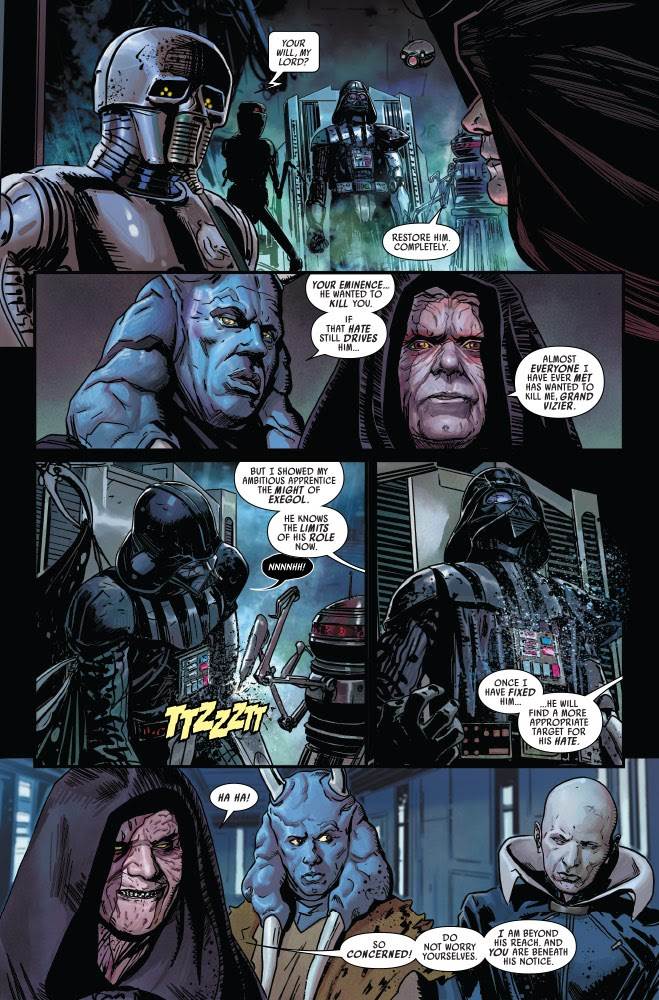 Vader’s renewed interest in Han Solo as a quarry is intriguing, as is the Sith Lord’s enlisting of the assassin Ochi of Bestoon to help in his quest to track down the carbonite block he allowed the bounty hunter Boba Fett to take from Cloud City on Bespin. I think Vader’s recent ordeals have given him a bit more insight as to how he can best apprehend Luke Skywalker, and maybe that going through his friends might be the best avenue to take at this juncture. We also get to meet a new Hutt character and see how Imperial politicians like Grand Vizier Mas Amedda react to the more mystifying dark-side aspects of their jobs, not to mention the terrific illustrations by new artist Guiu Vilanova (Marvel’s Planet of the Symbiotes), which often contain laugh-out-loud caricatures of some familiar faces. What role will Darth Vader take in the War of the Bounty Hunters going forward? I’m very curious to find out, and I’m also chomping at the bit to see Vader go up against IG-88, as teased on the cover for the next issue, due out in June. 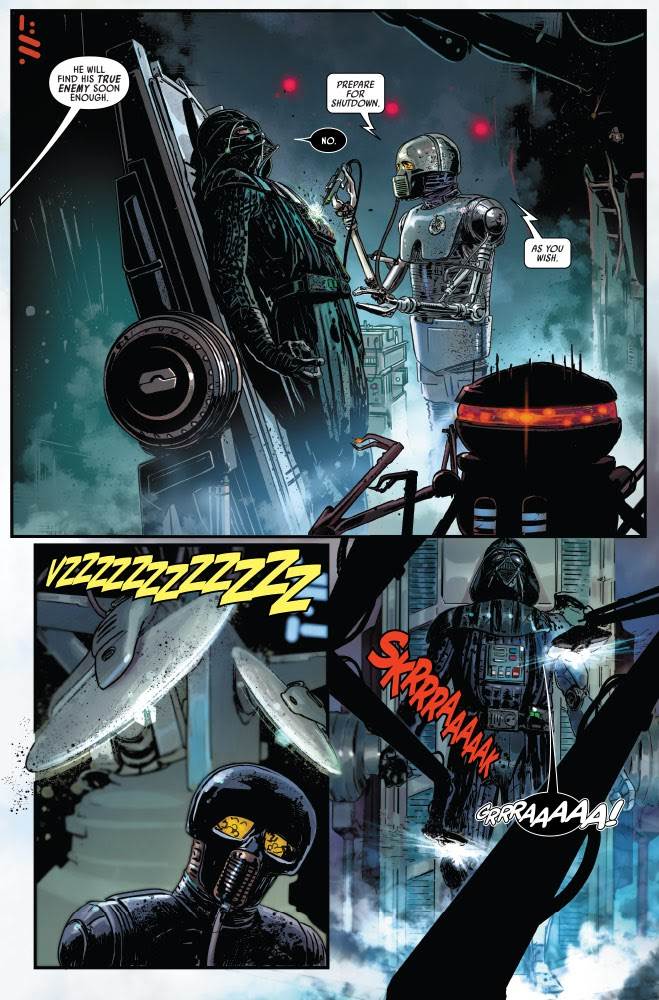