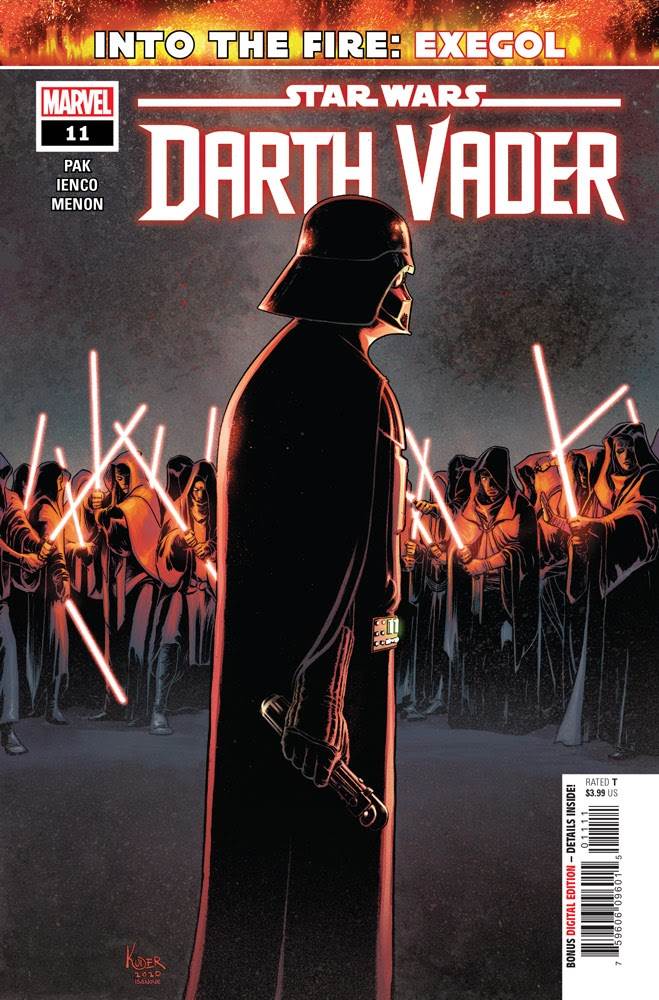 I love Marvel’s current run of Star Wars comics set between the events of The Empire Strikes Back and Return of the Jedi, but it’s very rare that I get so invested in a single issue that I’m left shaking with sheer geeked-out energy by its conclusion. That happened to me today with Star Wars: Darth Vader #11 by the extremely talented team of writer Greg Pak and artist Raffaele Ienco.

Darth Vader #11 picks up where the previous issue left off, with the Dark Lord of the Sith arriving on the mysterious planet Exegol (first seen in 2019’s Star Wars: The Rise of Skywalker, which takes place more than three decades after this comic in the larger timeline) after having conquered the summa-verminoth (called “the monster from Red Space” here). Of course Emperor Palpatine is waiting for him with some giant monsters of his own, and readers are treated to a multi-page battle of such immense scale that both Vader and ol’ Palpy are depicted as tiny blotches on the page with yellow circles drawn around them so we know where the are– seriously. It’s completely awesome in its absurdly over-the-top spectacle. But the jaw-dropping moments in this issue don’t stop there. 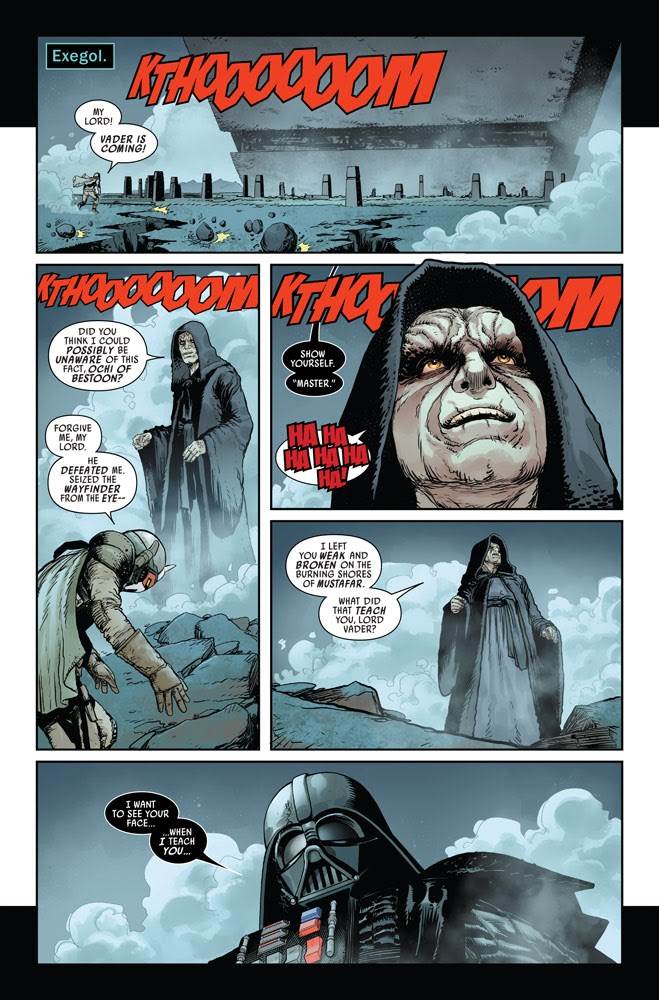 Palpatine also has the assassin Ochi of Bestoon around as a plaything, and he and Vader are led on a grand tour of Exegol’s eerily massive temple and its atmospheric chambers, where they encounter the emperor’s other trained warriors, more Sith acolytes armed with deadly blades, cloning tanks complete with potential Snokes, and another artifact floating in a jar that had me immediately asking, “Is that what I think it is?” That last reveal, if I’m interpreting it correctly, carries with it such tremendous implications for the future of the Star Wars storytelling universe (especially to those familiar with the old Expanded Universe– now called “Legends”– continuity) that I will refrain from spoiling it here. Suffice it to say that I hope this isn’t some throwaway reference and that Pak, or perhaps another Star Wars creator working in a different medium, intends to pick up that thread as more content continues to roll out. 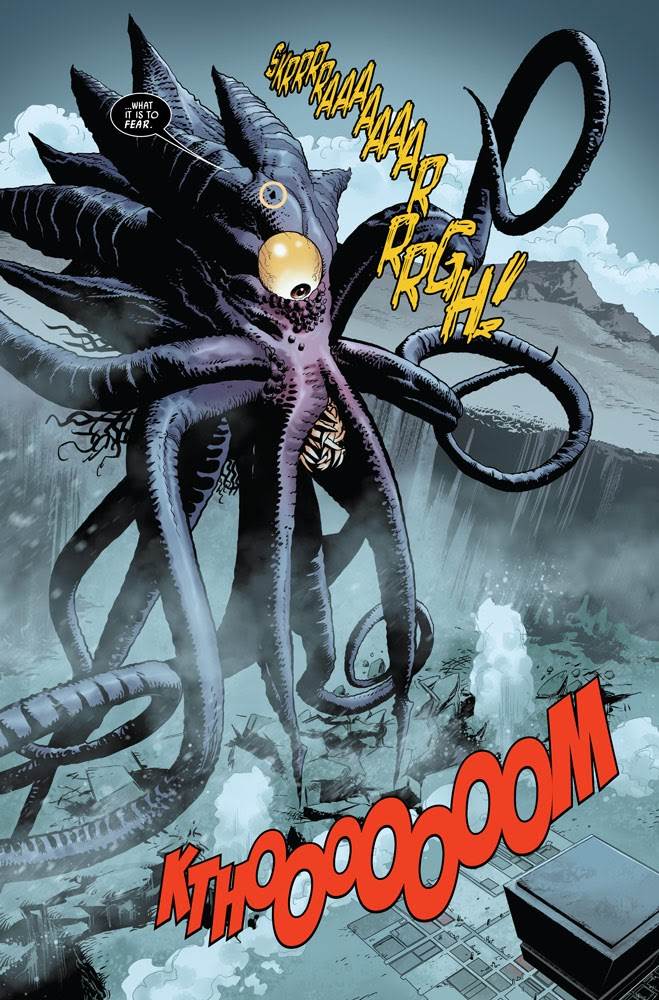 We also get a tantalizing (and fairly heartbreaking) exploration of how exactly Palpatine fueled his fleet of “Final Order” Star Destroyers and their planet-killing weapons, giving more weight to those ships’ presence in The Rise of Skywalker and further expanding upon the intriguing mythology behind what makes the Jedi and Sith– not to mention their lightsabers– tick. It almost goes without saying that this is an important comic book issue for fans out there who are interested in learning more information about Star Wars lore as these titles fill in the storytelling gaps between movies. And Pak does a really terrific job of downloading all that material while keeping this particular narrative chugging along, while Ienco skillfully illustrates those ideas in moody, dynamic ways. Bear in mind that we know Vader has to at least temporarily come to terms with being Palpatine’s apprentice before these comics catch up with the beginning of Return of the Jedi, but what’s really impressive here is how compelling that journey has become. 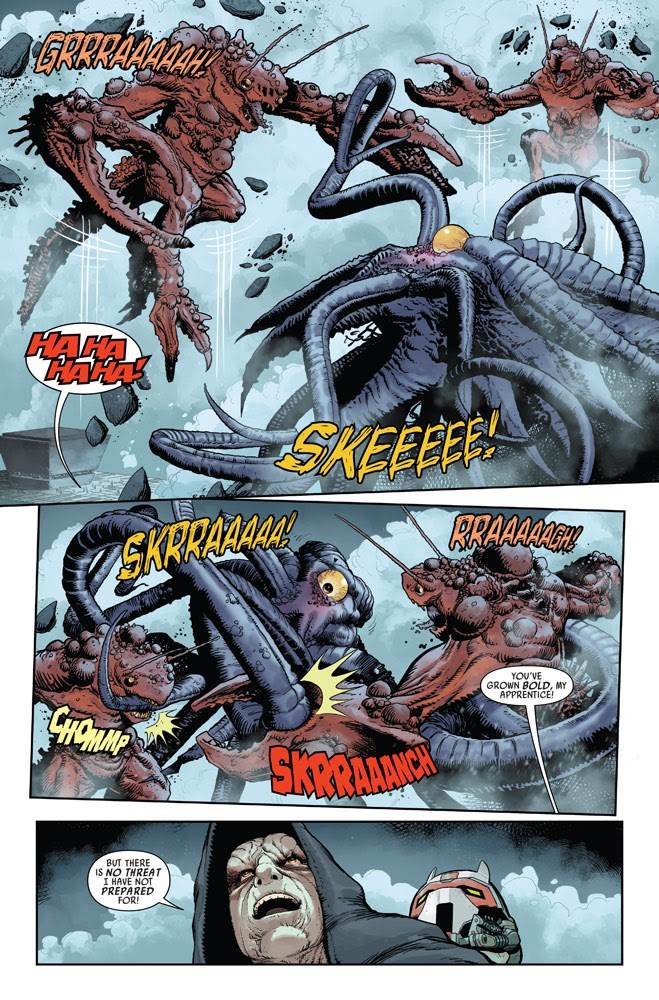