We’re back for another recap of Freeform’s Motherland: Fort Salem. This week, the trio splits up for Fall Break, but of course nothing goes as planned. The stakes get higher as they face threats from the Camarilla and a secret about the Spree is revealed. Let’s go. 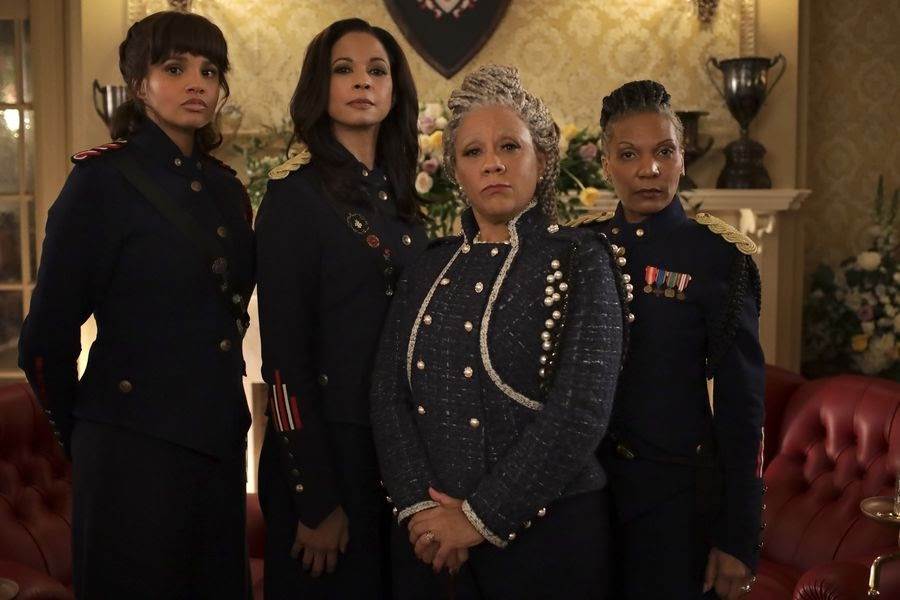 We open as a small group of witches gather in a cabin. A hooded figure makes a speech as the witches drop jewelry  into a cast iron pot sitting above coals in the fireplace. A young man and associate of Willa’s, Jonas, makes his contribution, a wrist watch. The figure thanks him by name and promises that a new day will rise for the witches. Then everyone starts chanting “we are the Spree.”

After the events of the last day of term, Tally has decided to accompany Raelle home to Chippewa Cession. As they arrive, Raelle asks Tally not to mention the “Witchbomb” deployment, the Spree, or Scylla. Meanwhile, Abigail takes Adil home with her to Anapolis. She tells him the house should be empty and he should avoid her grandmother. They discuss plans to visit Charvel’s grave so they can use her blood to find her Camarilla killer. But before they can get started, they spot three men walking into the house.

Raelle tells Tally her father wasn’t big on Alder and Tally muses that she causes more harm than good. She says Esterbrook helped her see the truth about Alder. She goes on to say that Alder used Nicte and wonders if she’ll try to use Raelle and her Witchbomb. Raelle comments that Alder made Liberia worse and that’s what killed her mother, but there’s not much more that she can do to Raelle. “Don’t worry Tal. I’ll always have a choice.” Raelle’s dad shows up and they head into a restaurant. Across the street, two women are watching the group from their car. 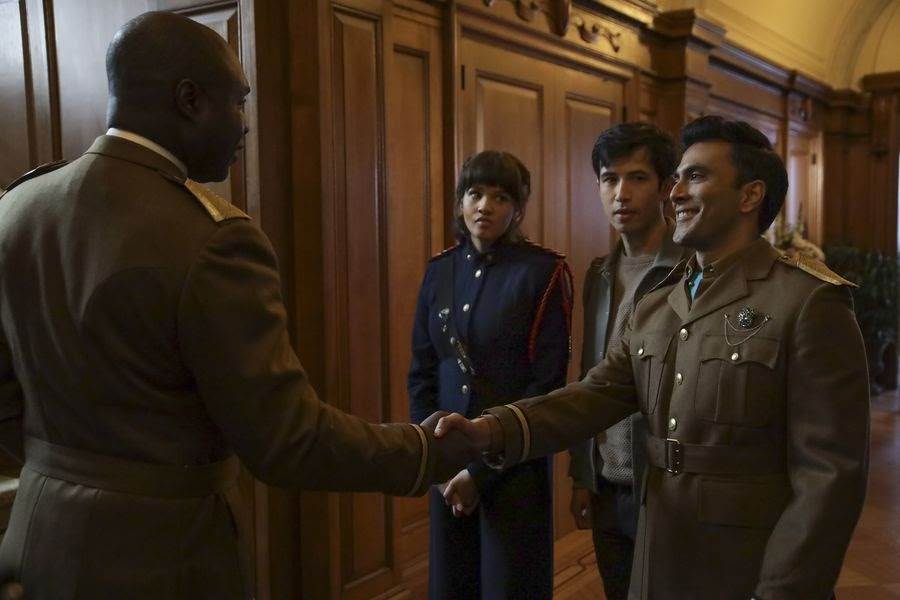 At Abigail’s home her three fathers show up and they really want her to handfast. They’ve invited several men who would be suitable partners and would help in furthering the Bellwether line. Abigail is frustrated that this is on her Fall Break schedule and asks if her mother knows, to which her Father (Cladue) says “it was her idea.” He says they’ll make room for Adil.

Back in the Cession, Tally shares a story about her mom that prompts Raelle’s dad to talk about her birth. He’d needed special permission to get on base and was stopped by a soldier. When she found out he was the father, she told him it was wrong and that he’d made his daughter weak. That’s when Willa came out of the room holding Raelle and asked the soldier, “does my daughter look weak to you.” Tally is amused, but a still wounded Raelle doesn’t want to talk about her mother. She gets up to request something from a server and sees a news broadcast about the train attack in India. The anchor says the government believes the Camarilla are responsible.

Scylla and Anacostia go to Tiffany’s home and to find signs of a struggle and both her parents murdered. Scylla wants to give Tiffany to Willa and the dodgers, but Anacostia thinks the military should have her. Scylla says the dodgers will take care of Tiffany just like they did her. Anacostia argues that Fostering raised her well. But Scylla reminds Anacostia of where she is now, out here with a “terrorist.” Anacostia says she knows Scylla’s not the same person from a year ago. Scylla tells her she laughed when killing Shane. Anacostia is surprised by this news and asks what good it does to rob Brianna of a father, but Scylla doesn’t want to talk about it and knocks Anacostia out. She takes Tiffany.

On the porch steps at Raelle’s house the girls chat and Tally thinks Rae should talk with her father about Willa, but Raelle’s not having it. Tally looks around the yard and sees the van from the diner. Raelle recognizes it too. They approach the van only to find out it’s three Military witches. They’re there to make sure Raelle, “miss special projects” stays out of trouble.

Abigail’s other two fathers’s come to talk to her and apologize for springing the group dinner, but tell her time is of the essence and she needs to start her line. She tells them she has bigger concerns than starting a family, but they insist on this as a priority.

Anacostia reports back to Fort Salem and Alder wants her off the assignment. Not only did they lose Tiffany, but the Camarilla has seen Anacostia’s face. She tells Anacostia she needs her back at her side.

Raelle and Tally visit with Quinn, Willa’s best friend and fellow witch. She has a gift for healing and the girls witness her fixing a blind man’s sight. Quinn’s thrilled to see Raelle and shares war stories of her days in the Army with Willa. Quinn talks about how Willa loved Raelle and was with her when she wrote home. Tally mentions that Willa didn’t show up at Fort Salem when Raelle summoned her. Quinn tells them it’s sacred land, the dead can’t refuse to show up. A frustrated Raelle says it must be a suggestion then.

The Bellwether Dinner is full of awkward conversations as Abigail’s possible mates join her and her fathers for dinner. One man says he’d be willing to stay home with their child full time until her second husband arrives. Her fathers  inquire about what Adil would bring to their union, but he says he wasn’t planning on being in an official union with Abigail. Her fathers don’t seem pleased. Petra joins the group and spys Adil then asks Abigail out loud if there’s something they need to discuss. But before anything can get out of hand, Petra’s mother makes her entrance.

Willa asks Tiffany if she can remember where Brianna’s dad took her, but the girl struggles. Willa gently asks her if there was something she does remember about the place. As she speaks, Willa grabs Tiffany’s arm. She’s able to determine that Shane had been delivering girls to a vet’s office and that they were kept in cages.

At Quinn’s house Raelle makes a toast in Mothertongue impressing Quinn with her War College fanciness. Raelle asks if Quinn was with Willa when she died, but she was stationed elsewhere. She mentions potions in bottles and Tally perks up asking when they were first used. Quinn says ‘94 in Sudan, but it went beyond bottles. Tally asks if the events were connected, but Quinn won’t give an answer instead telling the girls it’s getting late. As they leave, Tally tries piecing together all the information she has on Nicte and Alder. She tells Raelle she thinks Nicte created the Spree.

Back at the cabin, the small group prepares for a ritual, strapping Jonas to a chair. The hooded figure tells him it’s okay to be scared and that they’ll be with him the whole time. He says, “I’m not afraid anymore, Nicte.” That’s right, Nicte didn’t just create the Spree. She is the Spree. And she’s still very much alive. 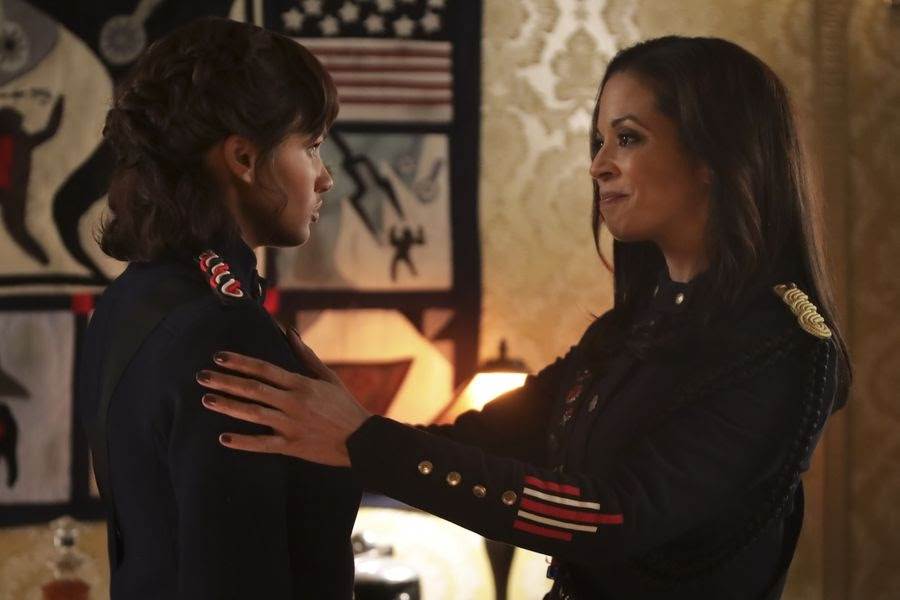 Abigail, Petra and her Grandma gather to talk about her potential mates. Abigail is not enjoying this process one bit and asks to be excused for the evening. Petra says of course as soon as she makes her selection. Abigail says she needs more time and the women stand to confront each other. Abigail wants to focus on more pressing matters like bringing the fight to the Camarilla. Grandma stops Petra and says she’s scolding her daughter for what she’s yet to do. Knowing she’s not long for the world, she addresses the women about legacy and tells Abigail she should choose her own path, not her mother’s, or Alder’s or anyone else’s.

In the middle of the night, Adil and Abigail walk the grounds and visit Charvel’s gravesite. Adil performs his Earthworking, summoning Charvel’s dead hand to the surface. He retrieves a few drops of her blood in a vial then sends the hand back under the earth. Abigail turns to him and states, “time to hunt.”

At Raelle house, Tally convinces her to play guitar and sing and she obliges. Her father hears and joins the girls. Tally excuses herself so the two can talk. Raelle admits to her dad that on the last day Willa was with them they got in a fight. Her mom had been sneaking off at nights and wouldn’t say why, prompting Raelle to call her a liar. Raelle’s afraid that the moment Willa died, her daughter’s last words would ring in her ears. He comforts her and says there’s nothing she could do to break their bond. Raelle nods in agreement, tears running down her face as he embraces her.

In the cabin, Nicte and crew observe Alder at Fort Salem through a special, almost magical screen. The General is about to be debriefed on the Camarilla attack.

Izadora has managed to grab a small sample of the plague from the train attack and shows Alder and Anacostia how it responds to stimuli like witch blood. She says the plague can remain dormant until a witch is near and then attack and multiply. It has no limits.

Nicte drops a Military medallion into the pot and then retrieves the pot from the fire. She carries it over to Jonas and hanks him before pouring the glowing hot liquid down his throat. She turns to look at the screen. Suddenly, Alder and the Biddies grab at their necks as their throats start to burn. Alder screams and Izadora and Anacostia watch, helpless to stop the attack.

Outside of Fort Salem, Exarch shows up at the animal hospital, and the guards are surprised to see him. He dismisses the group but they grow suspicious, inquiring about his security detail. They activate the devices on their chests causing Scylla to reveal herself. But she’s not alone, Willa is with her.

Alder and the Biddies have survived the attack, but not without sustaining massive injuries. Their chests and throats are badly burned and Alder is told not to talk. One of the Biddies asks Anacostia to stay and the soldier grabs the General’s hand and nods.

Inside the animal hospital, Willa and Scylla search for the girls, but they can’t find them. Willa discovers a hidden room, but it becomes clear that children have already been moved. On one of the walls are maps, photos and records tracking potential or known witches. As Scylla and Willa take it all in, they come across a picture of Raelle. Above her photo are the words, “Priority: Hightest.” She’s their next target.

At the Collar residence, as Raelle takes some refreshments out to the group guarding her, they suddenly tense up and sense an attack. Raelle tells them they should get behind her as the Camarilla hiss and move, attacking the soldiers with darts (?). Raelle tries to sing seeds, but she gets hit in the neck and falls to the ground. Hearing the commotion, Tally runs to the rescue, but she too gets hit. Tally sees her friend taken away before she passes out.