So many new developments, all told through the eyes of the rage-inducing Owl House himself, Hooty, on the latest episode of The Owl House. 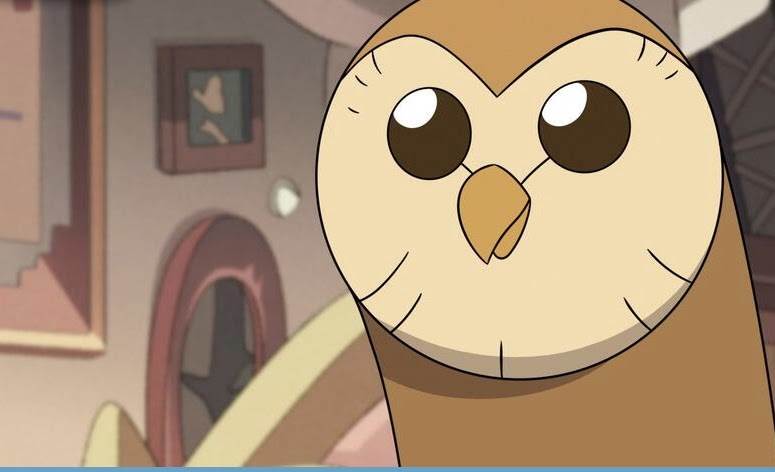 Lilith and Hooty’s friendship sets the stage for the latest episode of The Owl House, with the pair in communication via letter while Lilith is staying with her parents. As we learn, Hooty has spent some time trying to help the residents of the Owl House: King, Edith, and Luz.

King is trying to learn more about his origins, Eda trying to become the most powerful witch in the Boiling Isles again to help defend whatever the Emperor is cooking up, and Luz who is trying to get more information out of the echo mouse and get closer to Amity in the process.

We first set our sights on King, and Hooty being the only other Demon in the house (he is a house, actually), he can recognize that King is going through Demon Puberty, and they can now test to see what kind of Demon he is. There are three types: Bug, Biped, and Beast. After testing each one, with one test including an amusing, but apparently highly offensive dance number, they land on doing a blood test that ends up being inconclusive with Hooty trying to comfort King saying that “you are you!” and trying to play it casual and not hurt his feelings. Viewers might also process that this means King may not actually be a demon after all. This theory comes into play as King gets emotional when he starts saying nobody has responded to his video yet, or his wanted posters, and is just trying to figure out why his dad left him alone. In the outburst, a wave of energy explodes out of King, exploding Hooty’s cake/crumble.

While he seems to have hurt King more than helped him, Hooty now is on a mission to help Eda. How can she be so powerful if she's so tired all the time? So he makes her some special cookies with sleeping nettles baked inside. Eda worries because the sleeping nettles not only put someone down for hours at a time, but because they also enhance dreams and nightmares. And what happens when Eda sleeps? Devotees will recall that usually she ends up encountering and running from the owl beast that takes over her body as part of her curse. What follows is probably the most surreal thing I’ve seen out of a Disney Television Animation show, but is also rife with exposition.

In the enhanced dream sequence, we see Eda’s childhood, turning into the owl beast and hurting her father. This time however, she tries to change the outcome and decides to haunt the beast instead of letting the beast haunt her. After reliving the moment with her father, saying it wasn’t her own fault, it was the beasts. We then flash back to her sitting with Rain (who we met in a recent episode, introduced only as an old friend) breaking up with her because she isn’t honest and Eda watches in her dream screaming to just tell him and let them all help. She then turns on the beast again, blaming it for everything before jumping on and starts physically fighting him, before she herself turns into one getting trapped by an unnamed shadowy figure and flying away before falling onto a beach where she is physically tied to the owl beast as it tries to fly away. As the beast wears itself out trying to escape, it collapses next to Eda when a bottle of elixir shows up out of the sea. She tells it that she thought this was a way to fight it, but could be what makes them be able to get along, and spend some time face to face, and perhaps they need to call a truce and accept each other. The owl beast slurps up the elixir out of her open palm and cuddles up in her lap, and for the first time ever, Eda has a beautiful dream. She then wakes up and realizes she turned again…or has she? Eda is now a controlled half witch-half owl beast. Hooty thinks he made things worse again, and runs out of the room with Eda chasing him, that is, when she’s not admiring herself in the mirror.

Luz is trying to get that echo mouse to talk again, but Hooty overhears her talking about how she is going to ask Amity out. Hooty leaves a note at the door saying she can find love in the basement, so she goes down there to find Amity trapped in an owl pellet. Hooty arranges a special date for the pair, building a complete Tunnel of Love with full scenes and giant signs of affectionate sayings. Luz thinks this is a nightmare, and Amity is oddly flattered, until she sees how hard Luz is trying to hide everything. Referring to the tunnel of love as stupid, Amity mistakes that she thinks the idea of them dating is stupid. Hooty overhears and thinks he ruined everything again, launching into a breakdown where he tries to break free from his house restraint, shaking the tower that King is in causing it to almost collapse. Eda rescues King by flying in, but Luz and Amity are directly beneath as the tower crumbles. King screams for them, and his new voice powers blast the crumbling power into dust and save the pair. Eda tries telling Hooty that despite what he thinks or what they may have said, he actually did help everyone, and asks Luz what he was trying to help her with. Perhaps a little embarrassed, Luz explains that he was helping her ask out Amity, and that's what she wanted to do but not the way that Hooty built for them. Eda encourages her, it may not be perfect but it never is, so just go ask her out.

Luz heads back over to Amity and asks her out and crowds watching their TV or their devices start cheering, especially when Amity interrupts and asks her first. The two hold hands and we are then shown everyone inside together. Hooty then continues his letter to Lilith, explaining what’s going on in a summarized format. King is still learning about who he is and mastering his new voice powers, Eda can now become Harpy Eda and become the hybrid form of herself and the owl beast, but still drinks the elixir even though she has accepted the owl beast as part of her, and Luz and “her new GF” have been learning tips and tricks to get more information out of the echo mouse.

We then see Hooty send the letter off to Lilith, but is interrupted by an older creature who looks a lot like some kind of relative of King passing off a delivery to Hooty, asking him to make sure it finds its way to King Clawthorne. Hooty gasps…at the sight of a delicious bug on the delivery and devours it, saying whoops and hoping that that was junk mail. Now if you’ll excuse me, I need to go to Best Buy and purchase a new television since I spit out my beverage all over the screen and then angrily threw my phone at it in a fit of rage.

Hopefully I will be able to recap the next episode, but until then, The Owl House is available on Disney Channel and the DisneyNOW app.