Shorts 17 and 18 of The Wonderful World of Mickey Mouse take Mickey and Minnie to Never Land for a pirate adventure in “Untold Treasures” and to a magic show where some of Disney’s most magical characters appear. Here’s a recap of the two shorts that debuted on August 18th, 2021. 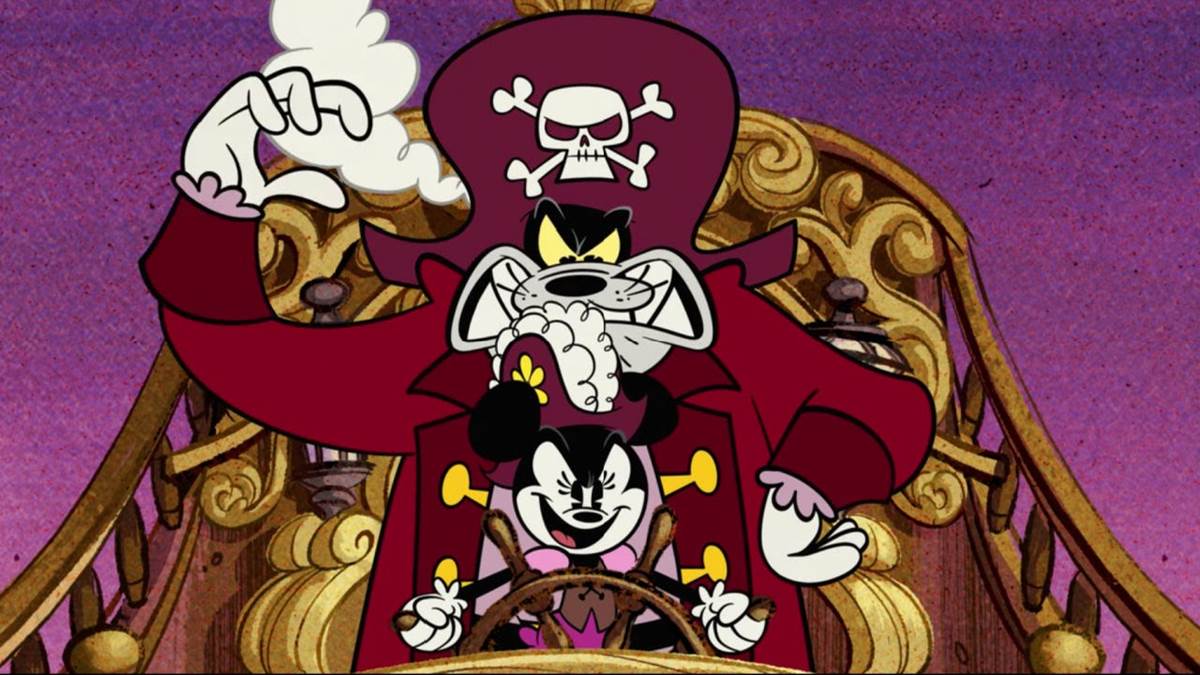 Minnie Mouse is captain of the Jolly Roger, or so it seems. “Hook-Legged Pete” catches Minnie at the wheel and puts her back in her place as a member of the crew as the ship docks in a bay of Never Land. Mickey is also a member of the crew, assigned to the crow’s nest, but he and Minnie don’t know each other in this story. The pirates are after buried treasure and Pete has the map, telling the crew that all of the treasure is his. 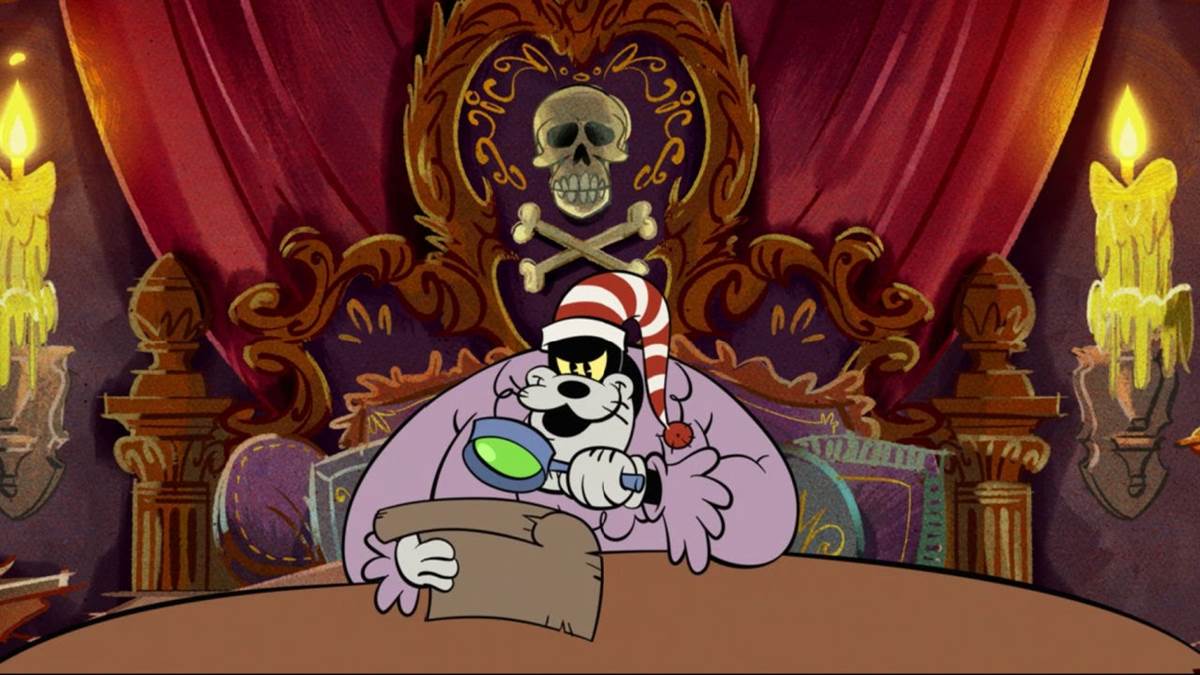 When Pete retires to his bedchamber (which looks familiar to fans of Disneyland’s Pirates of the Caribbean), Mickey and Minnie both sneak into his room to steal the map. Neither knows that they are each after the same goal of getting the treasure first so it can be shared with the entire crew. As both of their white-gloved hands grab opposite sides of the map, it rips in half. Minnie goes flying towards the wall where a statue of Captain Hook flings her back into Mickey and they both fly out of the porthole, into a lifeboat and skid to shore. Forced to work together in order to see the other half of the map, Mickey and Minnie arrive at a golden skull cave (similar to Skull Rock) where a maze of boobie traps await. Minnie ends up going first and among them is a giant rock ball, a nod to Indiana Jones and the Raiders of the Lost Ark. The map then takes them to Mermaid Lagoon where three colorful mermaid lounge on rocks. Minnie grabs a vine and safely swings across the lagoon, but the same vine breaks when Mickey tries it and the three peaceful-looking mermaids suddenly attack like ravenous animals. 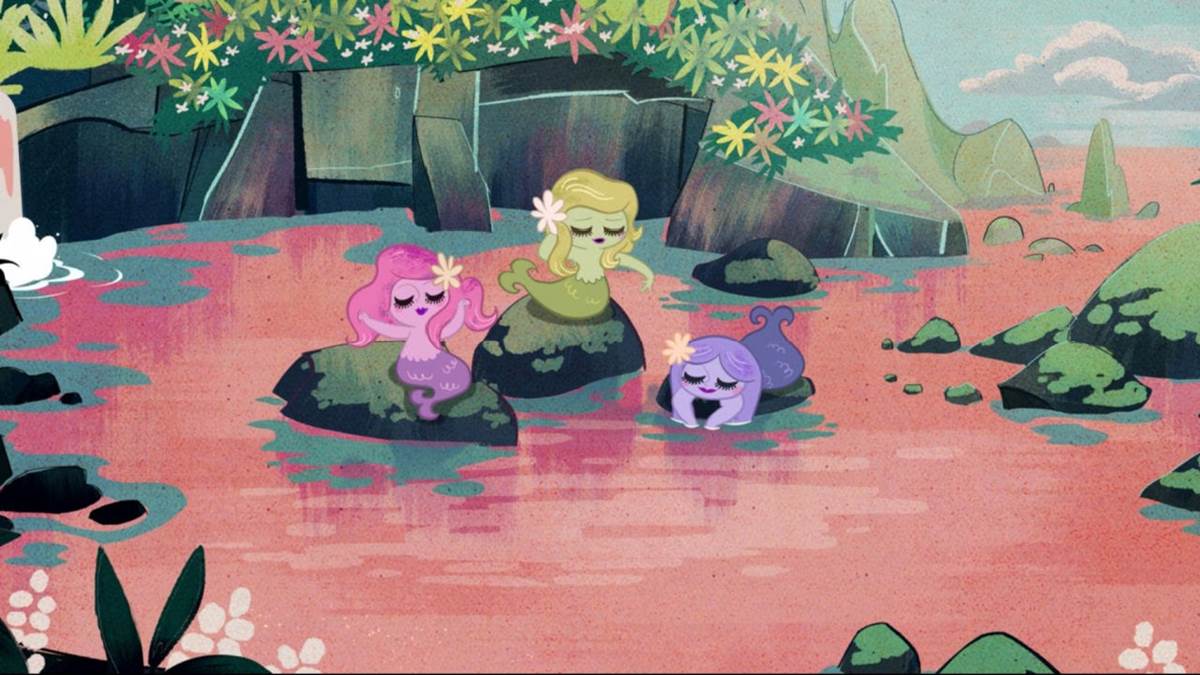 The next stop is Hangman’s Tree, which is not yet occupied by Peter Pan and the Lost Boys. It’s here that Mickey and Minnie find a locked door with a skull and crossed swords that talks to them (from the Pirates of the Caribbean attraction). In order to unlock the door, they will have to play the correct keys on Davy Jones’ piano, which rises from the ground. Mickey and Minnie bicker and as they hit the wrong keys, the full skeleton climbs out of the door and is about to attack. When they each confess that they just wanted to share the treasure, they realize they’re on the same side. Using the sheet music on the back of the map, they play the right music and the skeleton dances, bursting apart at the end to reveal a skeleton key. But just as they open the door to the treasure, Pete captures them and steals it all for himself. Mickey and Minnie are tied together and forced to walk the plank, under which three ravenous sea otters await. Mickey gets an idea and the mice use their tails to hang onto the plank, letting the otters chew through their ropes so they can spring back up and attack Pete. 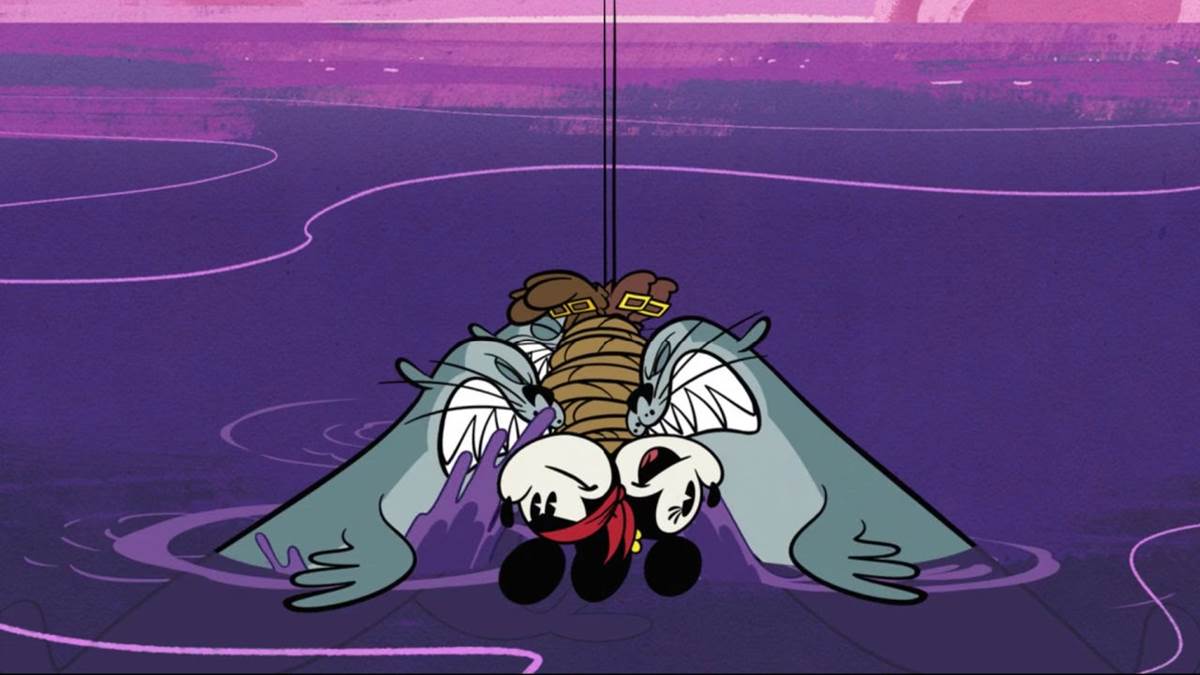 Mickey and Minnie chase Peter up to the masts for a sword fight. Pete almost defeats Mickey, but Minnie saves the day by grabbing the ship’s pirate flag and using it to bind Pete (the same way Peter Pan did in the classic animated film. 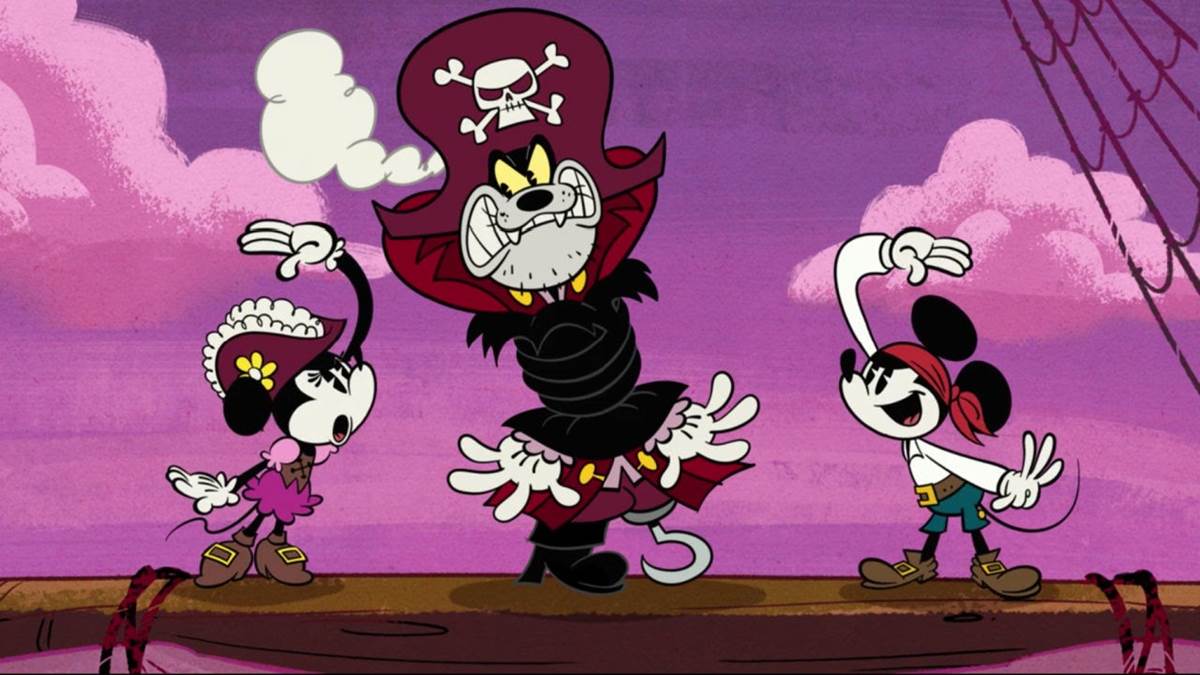 With Peter out of the way, Minnie becomes captain of the ship and shares the treasure with the crew. Mickey has a new mission, to find the 8th sea, and takes a small treasure chest with him as they sail off in opposite directions. 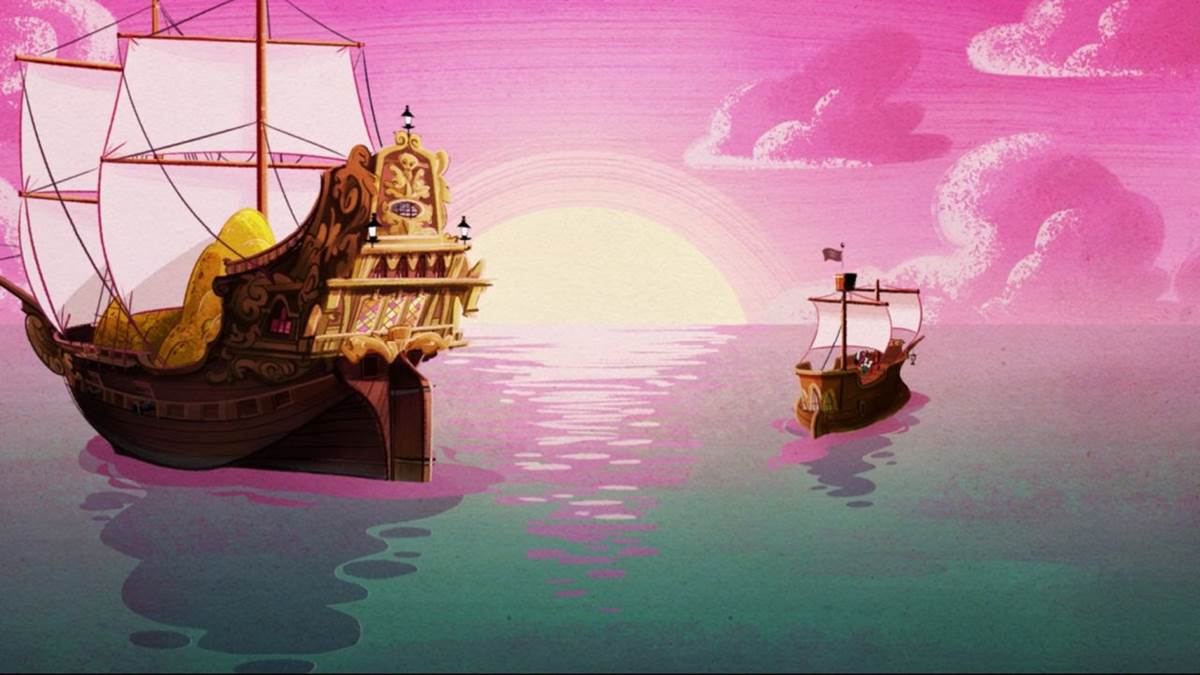 Mickey Mouse loves magic shows, so Minnie gets him tickets to see “Howdini the Magician” at Le Capitaine (a nod to Disney’s Hollywood movie palace, The El Capitan Theatre). Mickey can’t believe the tricks Howdini does and after the show, he tries to repeat one of the tricks for Minnie and fails. Minnie tells Mickey to just believe in himself to find the magic inside of him, but as they pass the stage door, Mickey rushes over to Howdini to ask for his advice. The magician takes Mickey to the trunk of his car, out of which he sells merchandise. Mickey buys a “Magic wand” for $20 (in Mickey’s World, Happy the dwarf is the face on this bill). At an outdoor cafe, Mickey uses the magic wand to try and make Minnie’s card disappear, but instead he makes his sweetheart disappear! When he tries to bring her back, a top hat appears where she was, out of which a rabbit that resembles Minnie (and Oswald) pokes its head out. When the rabbit goes back into the hat, Mickey dives in. A vortex of holes, Mickey tries to chase the Minnie rabbit, eventually trying the wand again. She becomes a chicken momentarily before becoming a ton of little Minnie’s. The next flick of the wand turns all the little Minnie’s into bubbles, which float way out of the hat. Minnie goes after her and sees Howdini performing street magic. Mickey asks the magician for help, but Howdini confesses that none of the magic is real, it’s all an illusion (and that $20 wand cost $1.50 to make). Mickey is angry and as the crowd clears, he rests his head dejectedly on the wooden crate and begins to cry. Suddenly, the Fairy Godmother from Cinderella appears just like in the movie, telling Mickey to follow the magic in his heart. Jiminy Cricket from Pinocchio floats down on his umbrella and lands on her shoulder, quoting “When You Wish Upon a Star,” which starts to play in the background. The camera zooms out and more magical beings have materialized to offer advice: Merlin from The Sword in the Stone and the three fairies from Sleeping Beauty. Lastly, the Blue Fairy appears and tells Mickey to believe in himself, the same words Minnie spoke to him before he bought the wand. 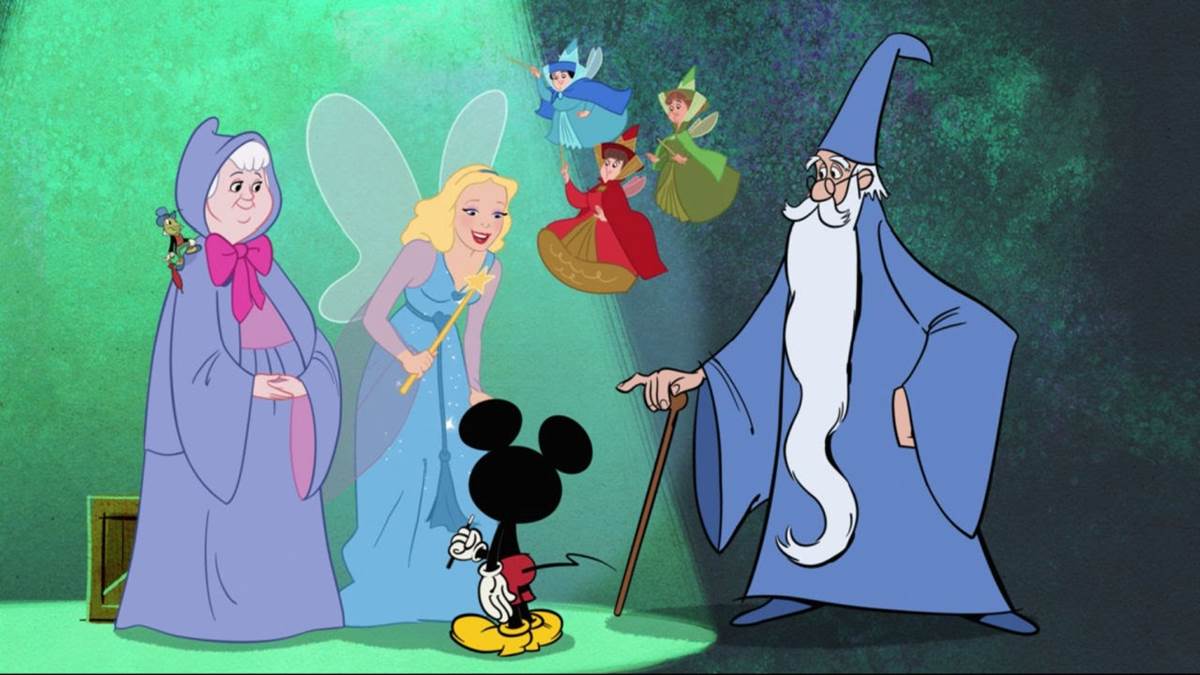 Mickey snaps the magic weant in half and declares “I believe” as a flock of birds flutter down and create Minnie’s silhouette, making her reappear as “A Dream is a Wish Your Heart Makes” plays. A crowd has gathered as the two share a kiss and poof into smoke that spells the words “The End.” 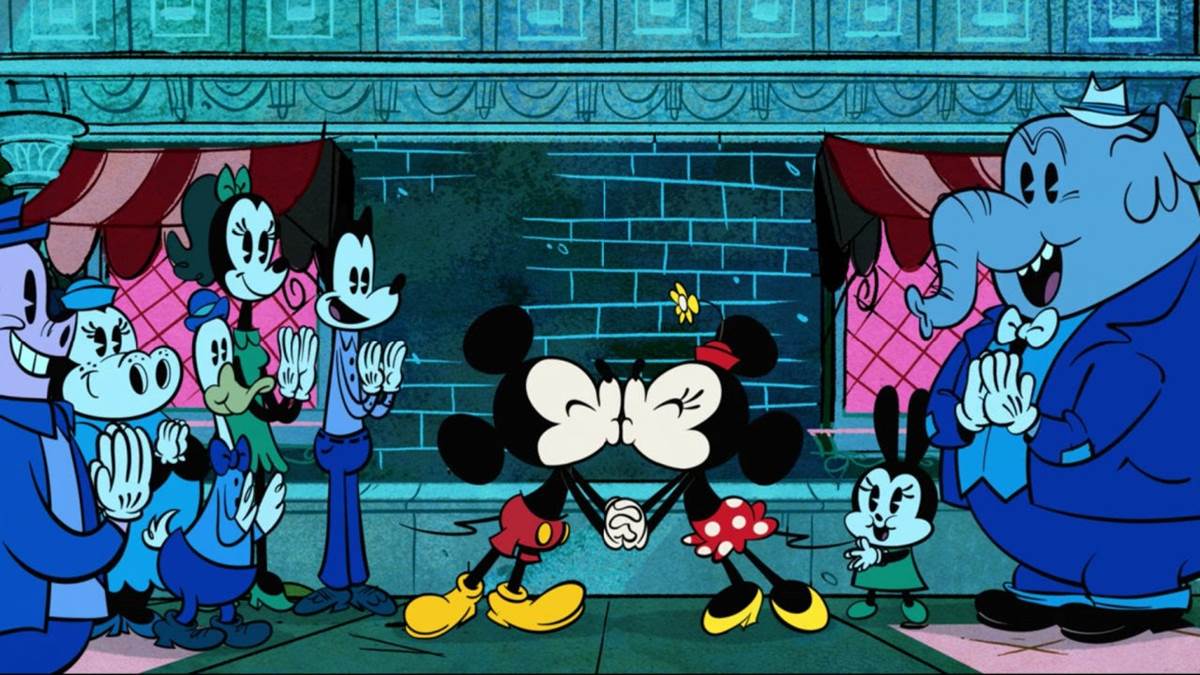 There’s just two shorts left this season and we will see ya real soon with those recaps!