With Season 2 of High School Musical: The Musical: The Series now in the history books (or yearbooks? Flawed pun premise on my part), the season’s soundtrack has now been released. The soundtrack has compiled all the songs, original or covers, featured this season in one easy-to-stream place. This season was incredibly strong when it came to musical content. Starting off with a one-shot musical extravaganza and constantly upping the bar throughout the season, the soundtrack is a great reference point to show how the series is just so wonderful! 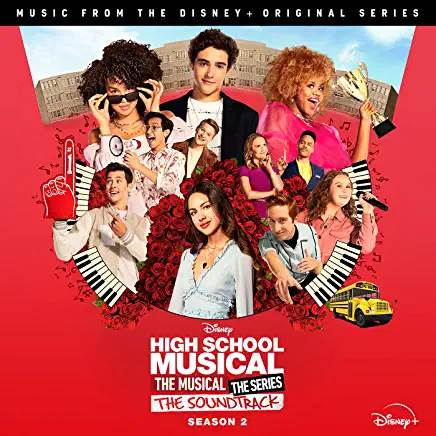 Of course, I love tension and creating conflict out of nothing. Thus, I’ve decided to unveil the top five songs of the season. They won’t be in any particular order (I love ranking things to stir the pot, but I’m not a monster!), but are without a doubt the best of the best.

1) “Second Chance” – They really went and said “This is the final episode, so let’s wreck everyone and make them question their own existences.” Chic. A quartet number filled with beautiful harmonies and overlapping lyrics where characters question their trauma? I’ll take one, please. Ricky, Nini, Gina, and EJ all shine on this gorgeous track that gives them all a turn in the spotlight, continues their individual arcs from the season, and allows them to recreate moody pop music videos from the late 1990s. Few things excite me more than singers leaning against a locker whilst staring into the ether. Overall, a really interesting way to share how second chances may arrive in life, but that doesn’t mean they’re always a guarantee for success.

2) “Around You” – Miss Jenn deserves the world and we, as a global unit, have to work towards that common goal. Her shining moment this season came in the form of a former-lover’s-quarrel with “Zacky,” her ex and competing theater teacher. This completely fun and tense pop number had them having fun, dishing out truths about the other, and singing the genius lyric “I’m over thinking ‘bout you.” Ten out of ten, would recommend singing loudly in the car with the windows down. Not that I…have done that…

3) “In A Heartbeat” – My sweet, sweet babies. My beloved Seb and Carlos had a lot of opportunities to shine this season, especially thanks to the quinceanero episode. However, the riff in their relationship after spring break due to completely valid insecurities (The discussion about being a couple at school possibly out of inevitability is something you don’t see a lot in young queer stories) led to this completely sweet song from Carlos. While Carlos taking the lead on a track warmed my heart, seeing how it was such a beautiful ode to his love filled me with so much glee. While I may be in a dark place relationship-wise, this season (and this song) has allowed me to look to others for the shine I need.

4) “Home” – Who gave Ashlyn the right?! How dare she absolutely annihilate a song from Beauty and the Beast which I famously dislike! I have always been a “A Change In Me” person, always skipping “Home” on my B&TB listens. Yet, “Home” has been on constant rotation ever since her gorgeous vocals went right into my ear holes this season. The control! The power! The acting choices! It’s truly the best performance of the song I’ve ever heard, no question.

5) “The Climb” – If you think I wasn’t including this on my list, you’d be sorely mistaken. I also have to take back previous comments as, without a doubt, this was the best song of the season. Seb (Joe Serafini, my biggest best friend crush) sang this Miley Cyrus track with such emotion and purpose that left me in tears upon my first watch. About every fourth listen on my own time, tears make an appearance as well. The placement in the story helps, as Seb is singing this to Carlos on his birthday, celebrating his queerness, his confidence, and their relationship. Just typing my thoughts on the cover is inducing goosebumps. It’s not only a gorgeous performance, but has quickly become a powerful mantra for myself for my future. We did it, Joe!

I have already prayed to multiple deities, conversed with numerous spirits via Ouija board, and have gone ahead and sent the Disney+ team an abundance of strongly worded emails in hopes that they’ll give us a Season 3. My confidence is high, but you just never know. Just looking at the above tunes, we definitely deserve to have more of this musical magic in our lives.