Oogie Boogie Bash kicked off at the Disneyland Resort on September 9th, a separate ticket event at Disney California Adventure Park. Characters from Tim Burton’s The Nightmare Before Christmas are at the center of the event and that extends to one of the event add-ons, the Oogie Boogie Bash Dessert Party. It comes with a curbside table and chairs along the parade route during performances of the Frightfully Fun Parade, a plate of themed treats, and beverage service for $84 per Guest. Under the glow of a blacklight, a themed menu describes each of the treats. As you can see from the photo above, the colors of Tim Burton’s The Nightmare Before Christmas are present in each. The one that stood out the most to me was an orange dreamsicle flavored crispy treat that looked like the curling hill Jack Skellington stands on. 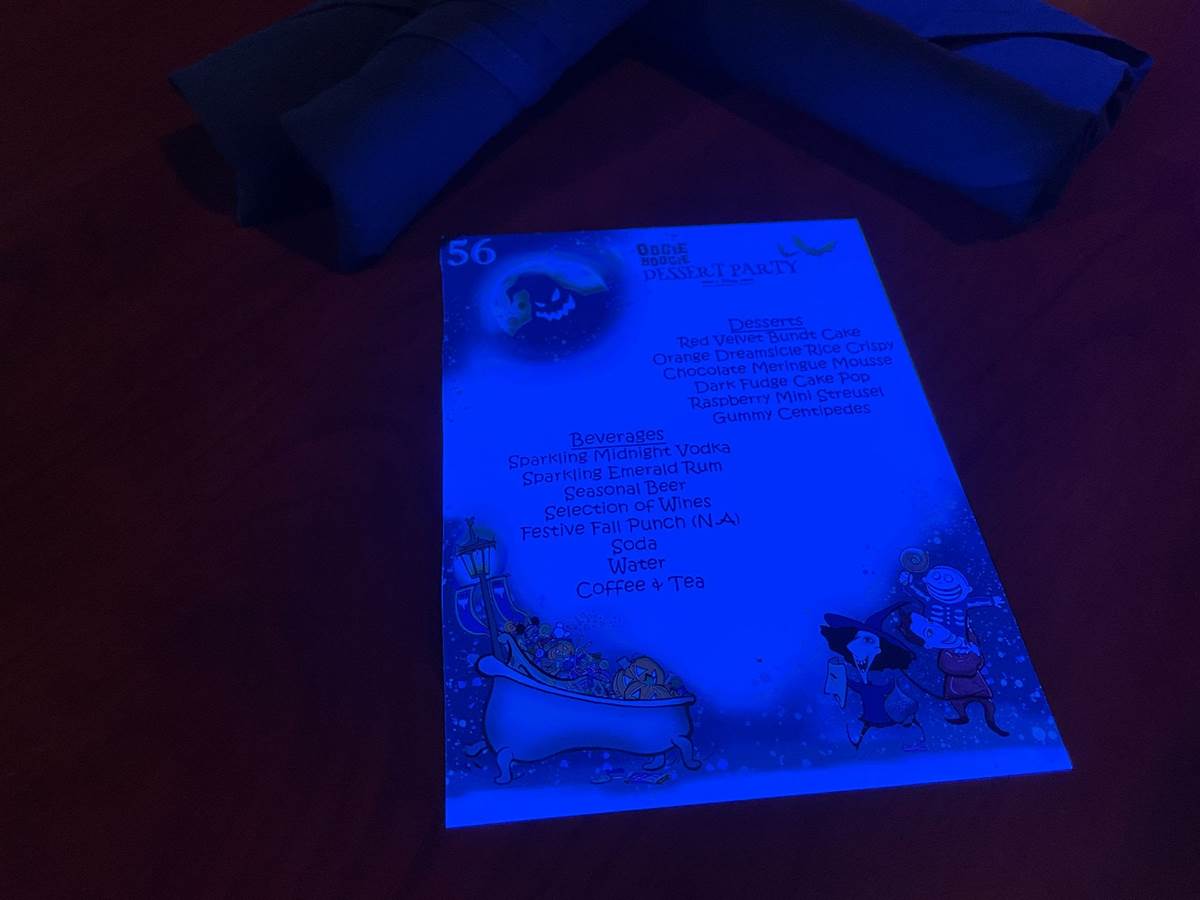 Bottled water was brought to our table right away and additional beverages included themed cocktails at no additional charge, a selection of wines from the Sonoma Tasting Terrace nearby, a non-alcoholic fall punch, plus soda, coffee, and tea. 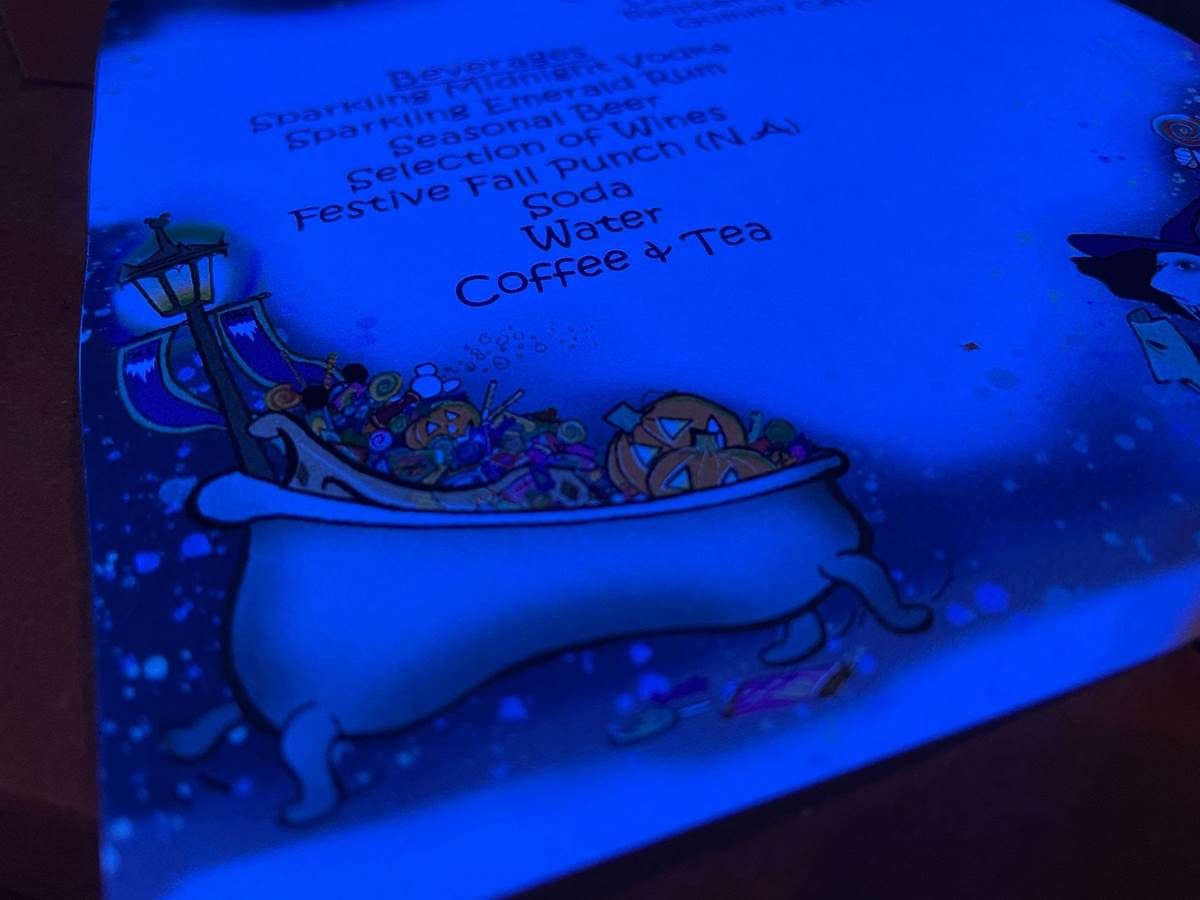 I also spotted a fun menu detail in the bathtub from Lock, Shock, and Barrel. It’s full of candy from their night of trick-or-treating, but they also scored a Mickey Mouse bubble wand! 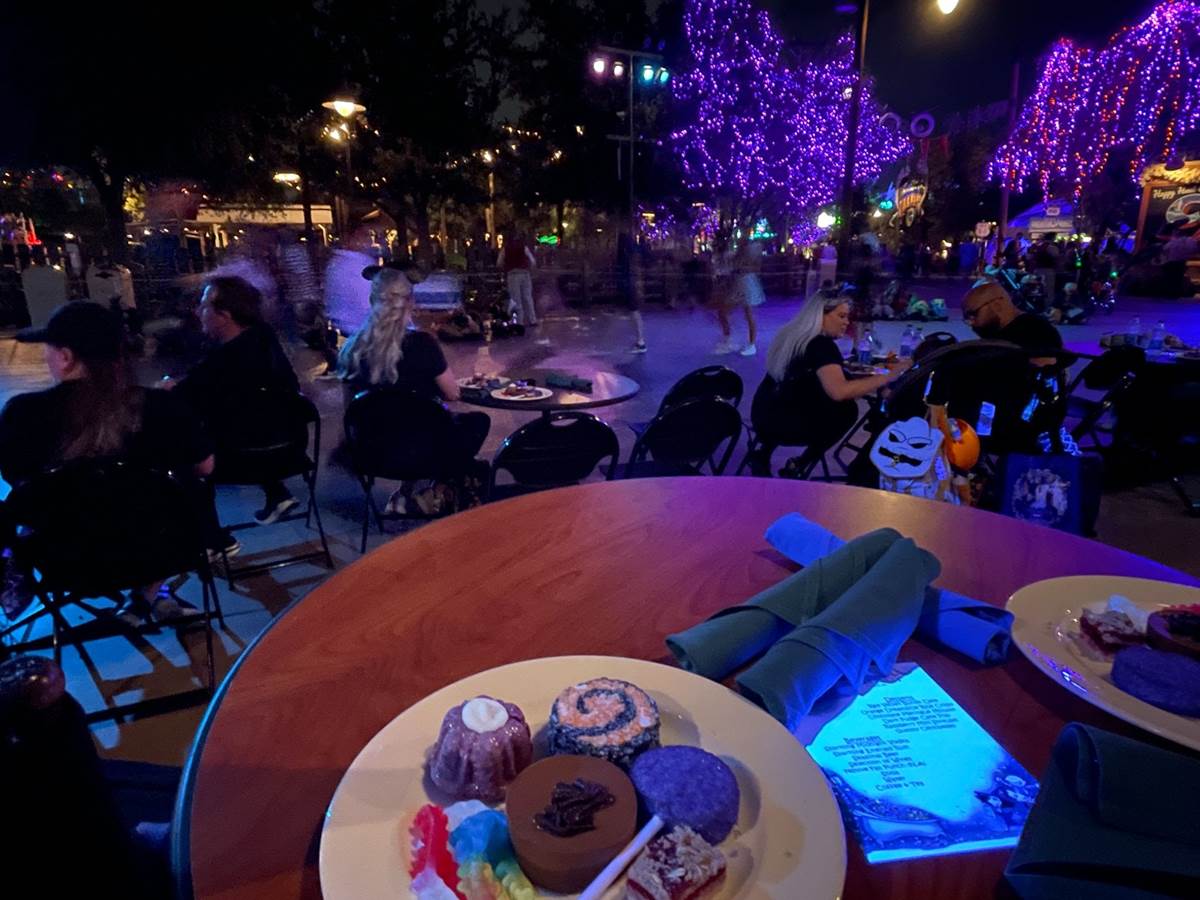 There are several levels of seating, with lower tables right on the parade route and high tops one row back. Tables in front of the Wine Country Trattoria restaurant also have terraced seating. Guests are assigned a table by a host as they would be at a restaurant. Speaking of Wine Country Trattoria, there’s also a dining package that comes with a reserved seating area for parade viewing. It’s a taped-off section across from Avengers Campus and doesn’t include chairs, but it’s also a lower price point and comes with a full meal for $55. 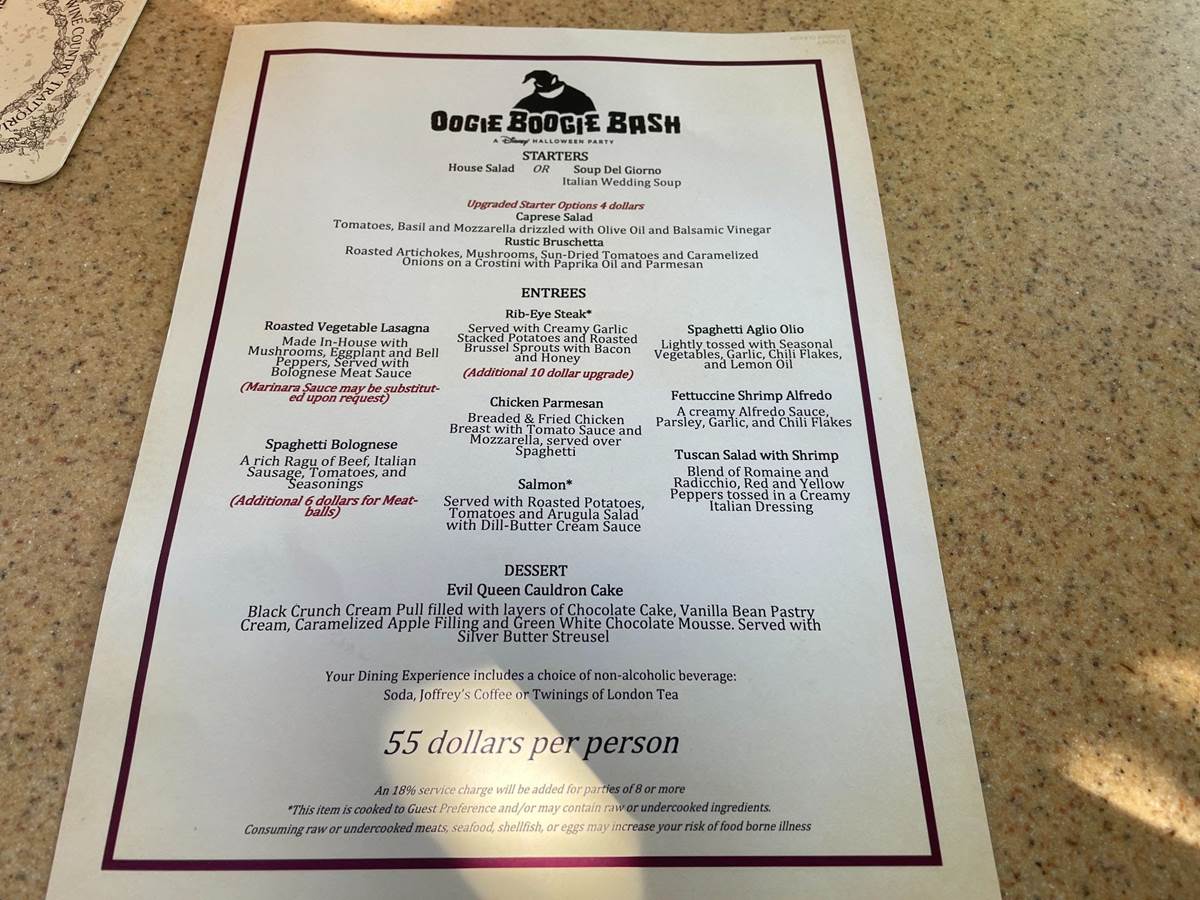 The kids menu is $40 per person and comes with a light-up Oogie Boogie popcorn bucket. Guests dining on the Oogie Boogie Bash parade viewing package also get an exclusive dessert that isn’t on the regular menu, the Evil Queen Cauldron Cake, themed to the villainess from Snow White and the Seven Dwarfs. 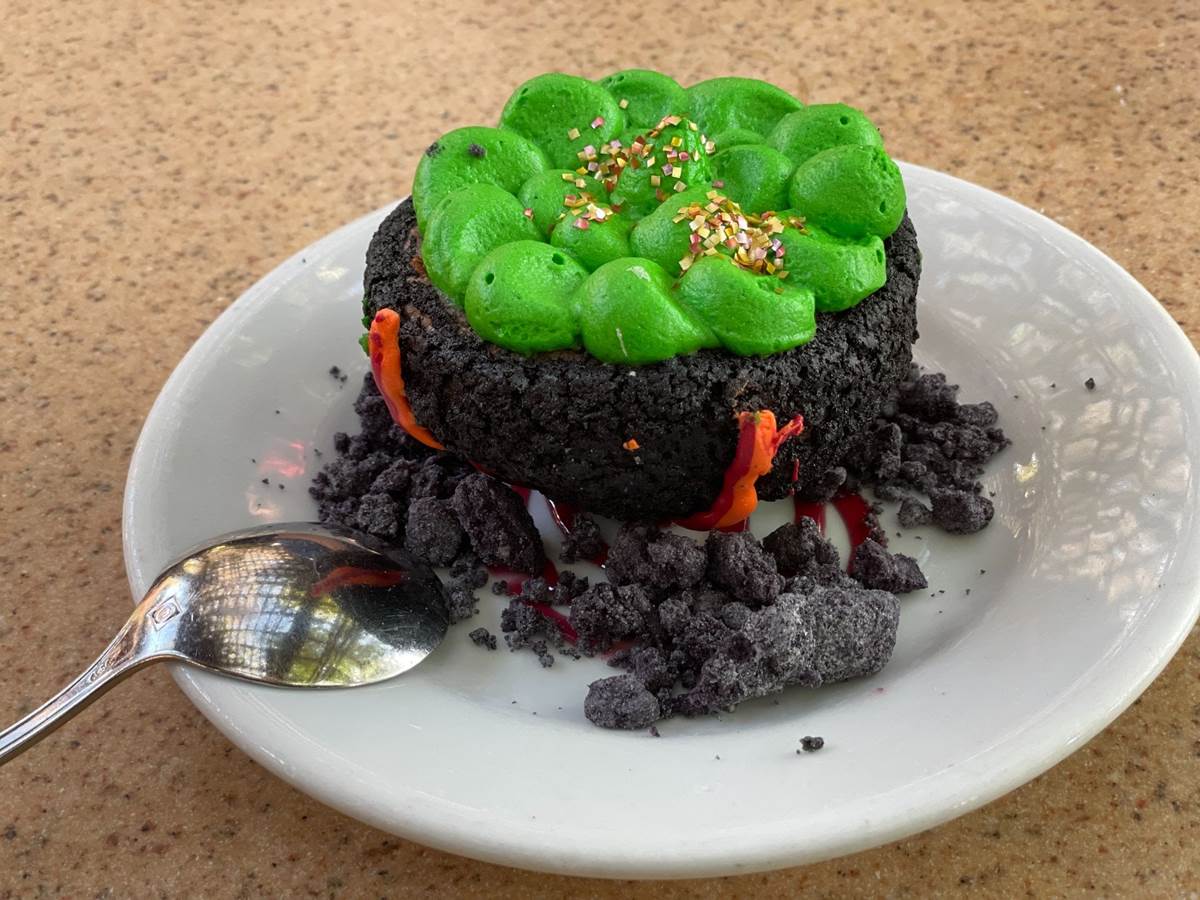 The dessert looks like the cauldron full of a potion that can poisen the ripest of apples. But on the inside, it’s all treats, no tricks, filled with vanilla pastry cream and carmelized apple filling. 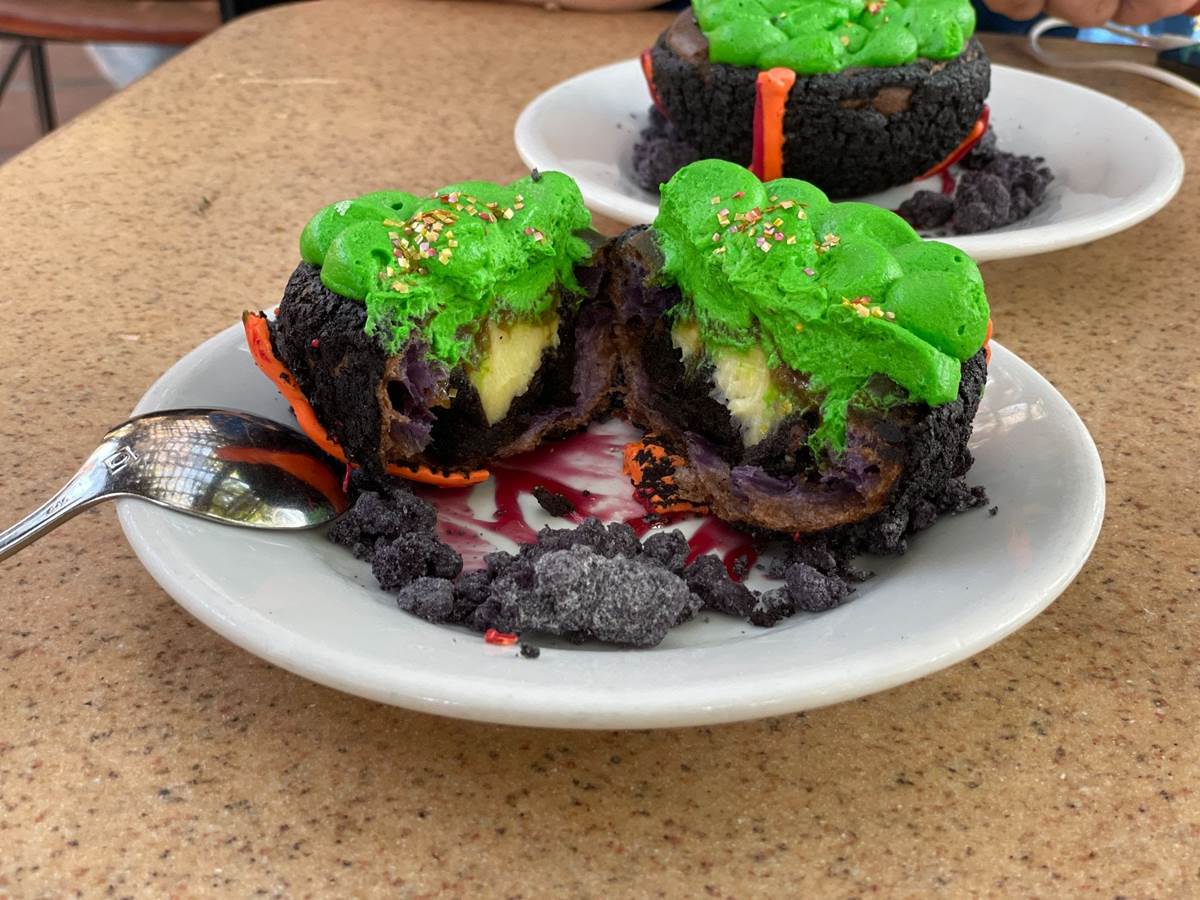 If you’re heading to Oogie Boogie Bash this season and don’t want to camp out for the parade, consider both of these options and plan ahead for your visit. Reservations can be made on Disneyland.com.