We missed out on a lot of things here in Southern California during the 2020 lockdown, but the one that hurt the most for local theme park and Halloween fans may have been Knott’s Scary Farm, a tradition that dates back nearly 50 years and is often cited as the progenitor (and still best, in my humble opinion) of all similar haunted attractions. 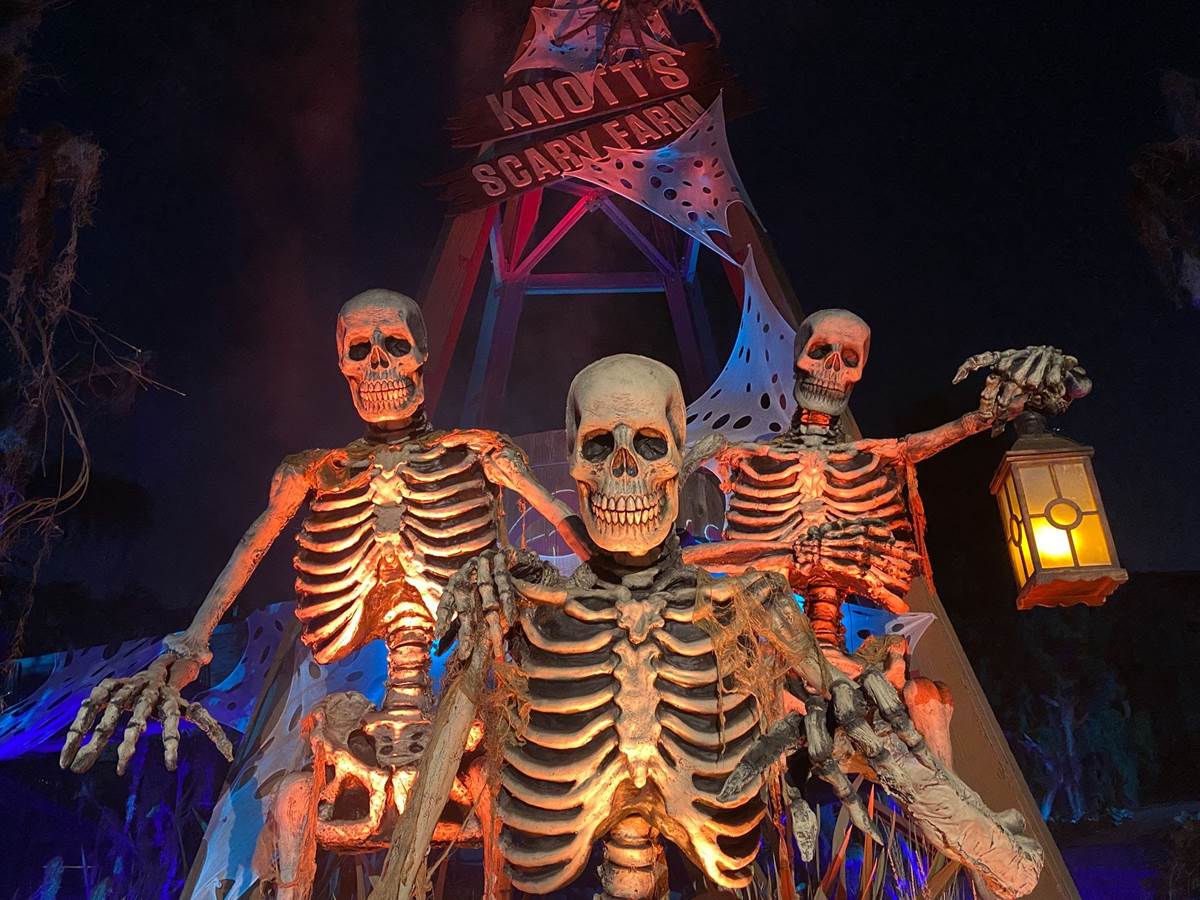 Last night, Knott’s Scary Farm reopened its gates and welcomed guests back into the fog for the first time since 2019– and I have to say the event felt like an immediate, rousing success. The energy and excitement among attendees was through the roof, and the “scare-actors” and performers around the park genuinely seemed thrilled to be back, putting extra enthusiasm into their efforts to spook those who dared to venture through the eight mazes and five scare zones, or watch any of the seven terrific shows. 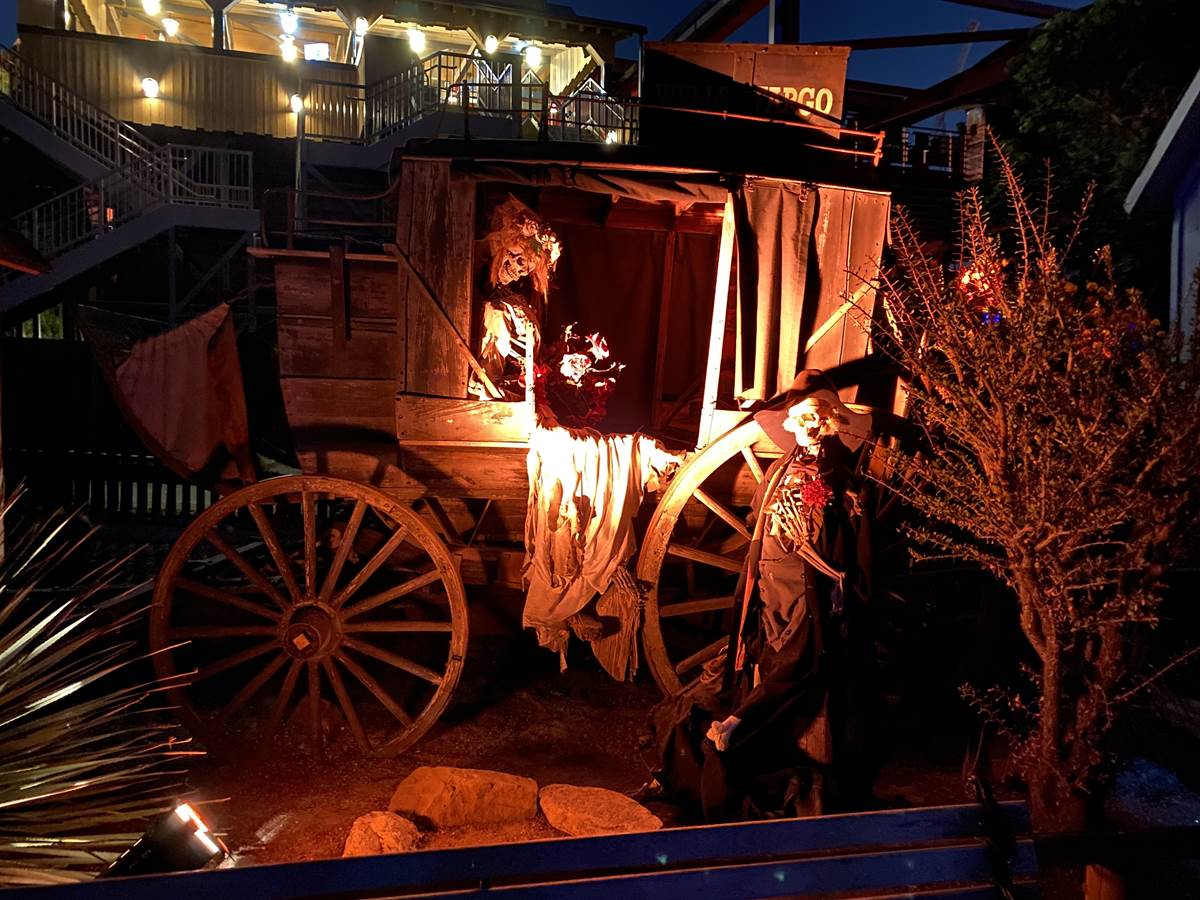 Starting with the mazes, there was only one new entry (which is absolutely understandable considering the unprecedented circumstances) but it’s definitely a strong one– “Mesmer: Sideshow of the Mind,” which invites guests to step inside the hypnotic world of the human mind, and what Knott’s describes as Mesmer’s “sinister sideshow.” There are some creepy new characters, dazzling visual effects, and a number of jaw-dropping moments that will have you pausing in your tracks to wonder how the maze’s designers accomplished them. 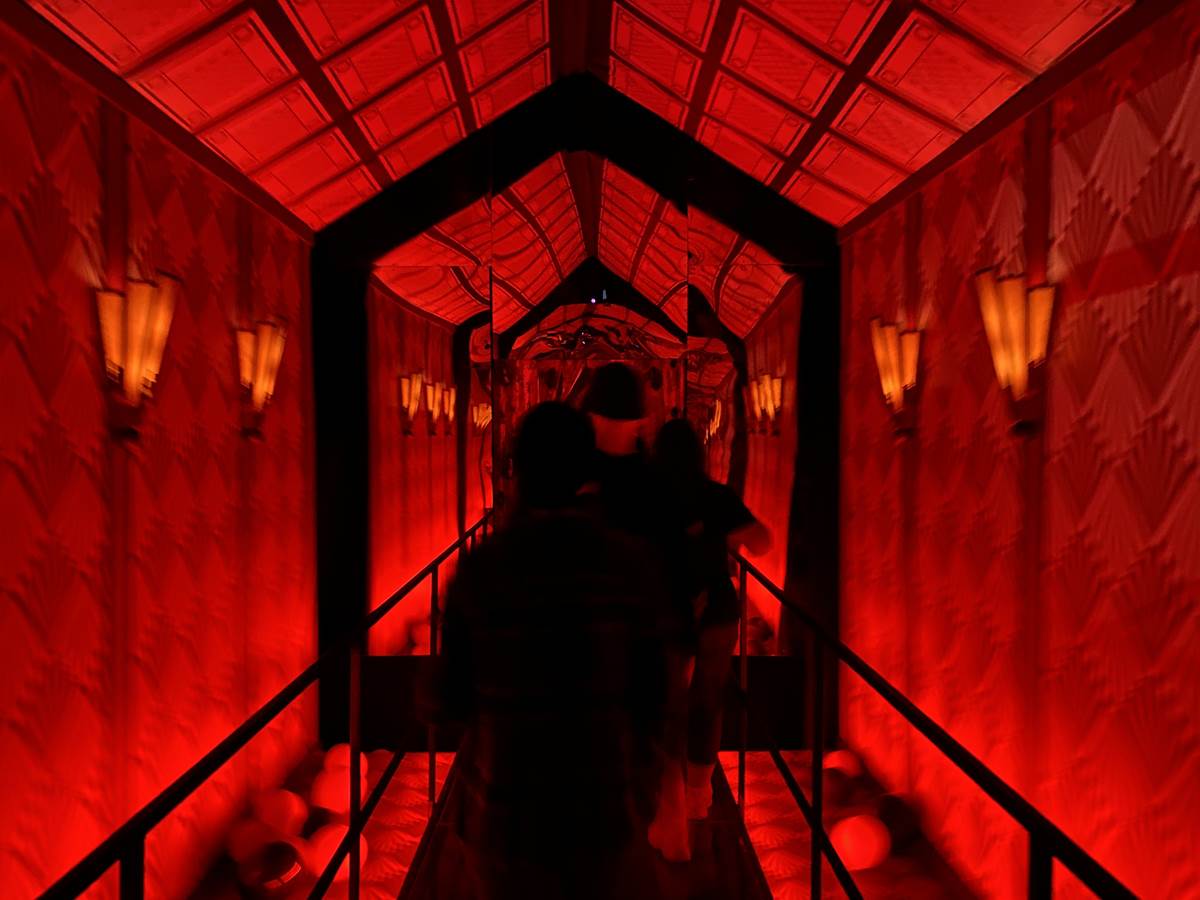 Returning mazes include “Paranormal Inc.” (now in its last year), the excellent “Wax Works” (introduced in 2019), “Dark Entities,” “Pumpkin Eater,” “Origins: The Curse of Calico,” and my personal favorites “Dark Ride” and “The Depths”– the latter of which I’ve decided may be my favorite of all time across my 20+ years of attending Knott’s Scary Farm. When these walk-through experiences are firing on all cylinders, they truly are transportive and– to use an admittedly cliche buzzword– immersive, relying far more on eerie atmosphere and beyond-impressive set design than simple jump scares to sell their effectiveness.

And speaking of this beloved event’s transportive nature, the new scare zone this year is called “Gore-ing 20s,” located by the newly christened Walter Knott Theater in the back of the park by the Knott’s Bear-y Tales attraction. This scare zone sends guests back in time 100 years to the prohibition era in an area populated by flappers, mobsters, evangelists, newsboys, and devilishly dapper gentlemen. It’s neat enough just wandering through this inventive space, but every once in a while a lively jazz show fires up on the balcony above, bringing the zone’s demonic denizens to life in dance, reverly, and everlasting damnation. Do you dare knock on the door of the nearby speakeasy and find out who answers when you give the password? Returning scare zones include “CarnEVIL,” “Forsaken Lake,” “Ghost Town Streets,” and “The Hollow.” 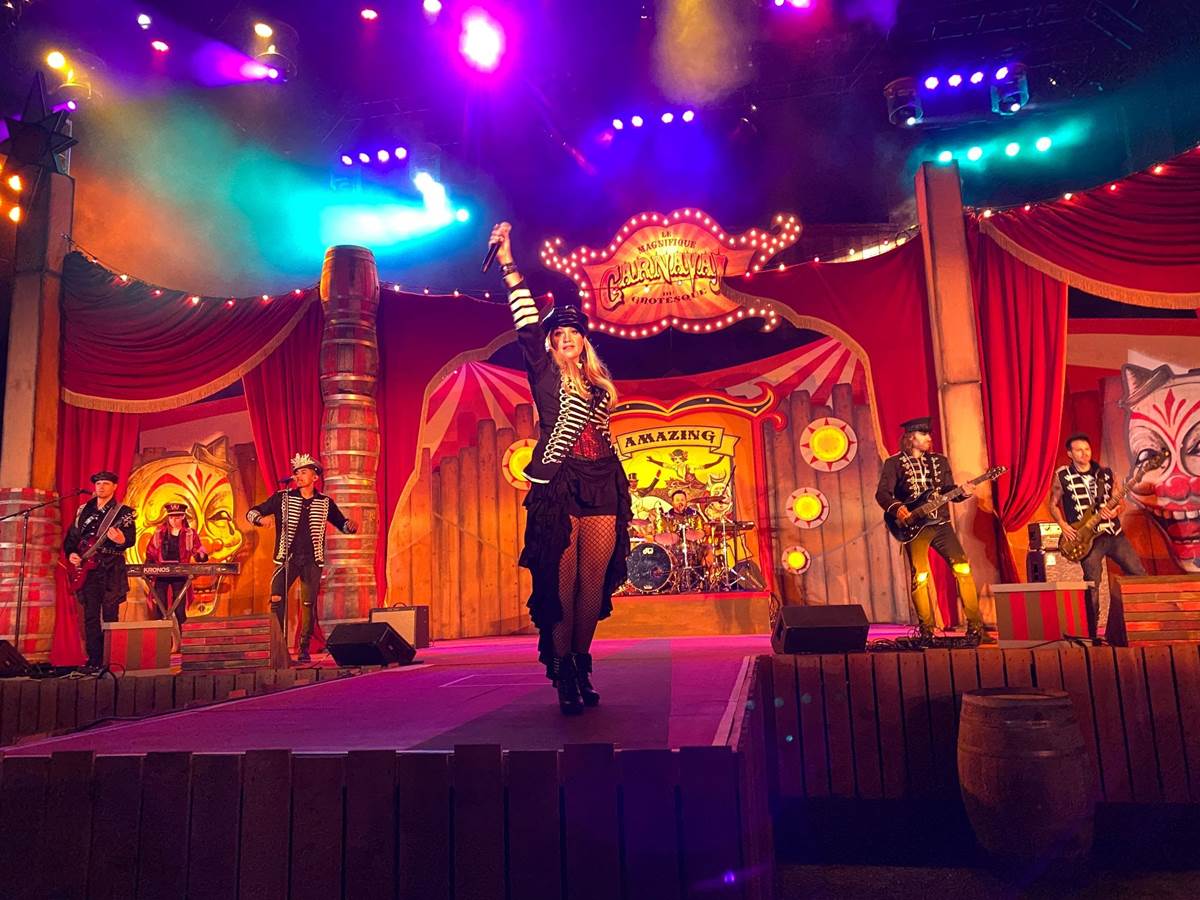 As far as the shows are concerned, there are some great new additions to the lineup, like “Invitation to Terror,” which puts the Mystery Lodge and its Pepper’s Ghost effects to great use with a hilarious 80s vibe, “Le Magnifique Carnaval du Grotesque,” which sees the band Hiatus (made up of members from Disneyland Resort’s much-missed Mad T Party band) take the Calico Mine Stage for 40-minute sets of rock n’ roll covers, “Wicked Drums,” which brings a trio of witches to the Camp Snoopy Stage (known as The Hollows scare zone’s glen during Scary Farm) in an effort to resurrect the Headless Horseman with the help of three talented percussion artists, the Day of the Dead-themed “Doce de la Noche” in Fiesta Village, the always-worthwhile “Into the Fog” art show celebrating the long history of Knott’s Halloween haunt, and returning acts like the “Conjurers” magic show in the Birdcage Theatre and the raucous “Puppet Up! Uncensored” from Henson Alternative. 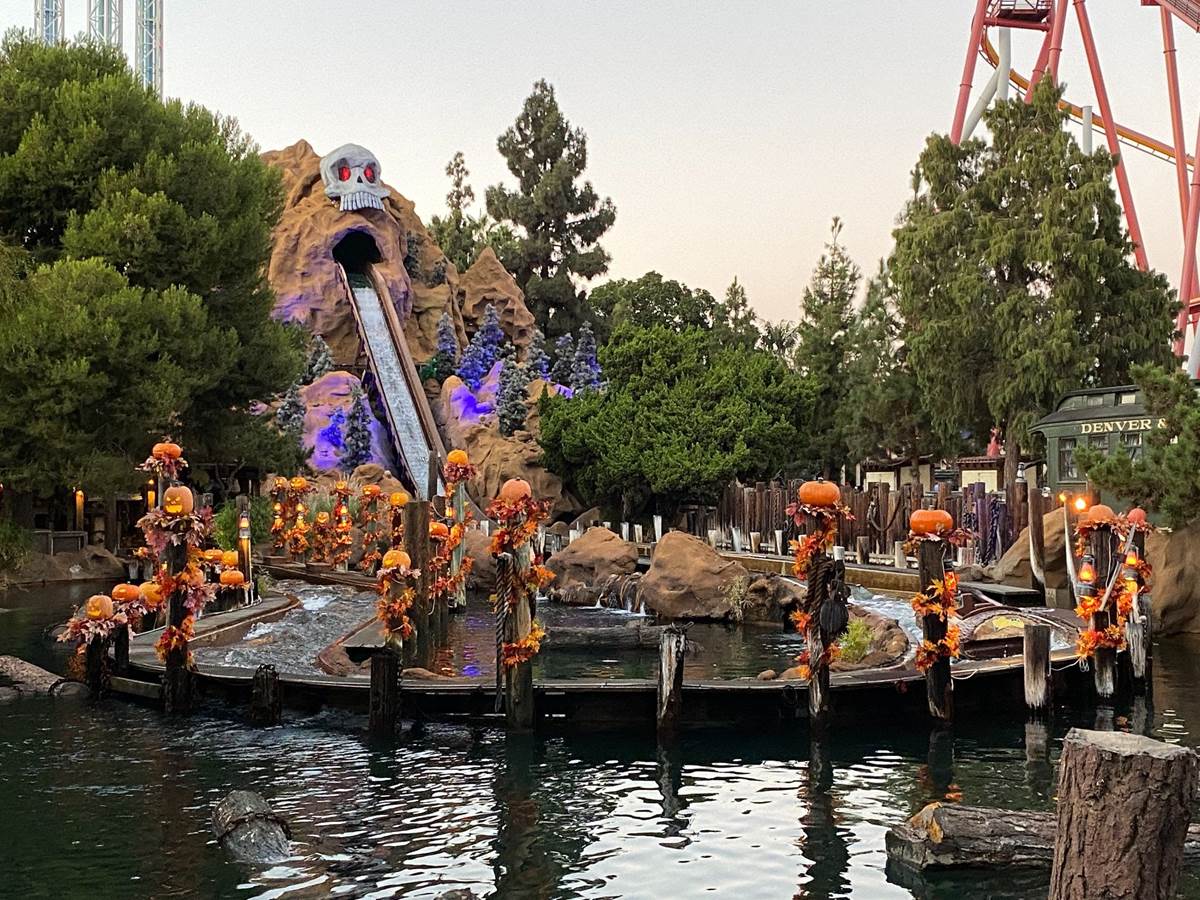 Before we left, we couldn’t help but jump on the Timber Mountain Log Ride attraction, which has once again been converted to its “Halloween Hootenanny” overlay for the season, even if that meant walking around with wet shoes for the rest of the night. And all told, it really is just wonderful to have Knott’s Scary Farm back in Southern California after a year of uncertainty and much more menacing real-world scares. It was a pleasure to step through those gates and through the welcoming fog of Walter Knott’s Ghost Town and its surrounding areas, exploring and appreciating the effort that went into bringing this event back to life. Knott’s Scary Farm runs Thursdays through Sundays from now until Halloween. For additional information and to purchase advance tickets, be sure to visit Knott’s Berry Farm’s official website.