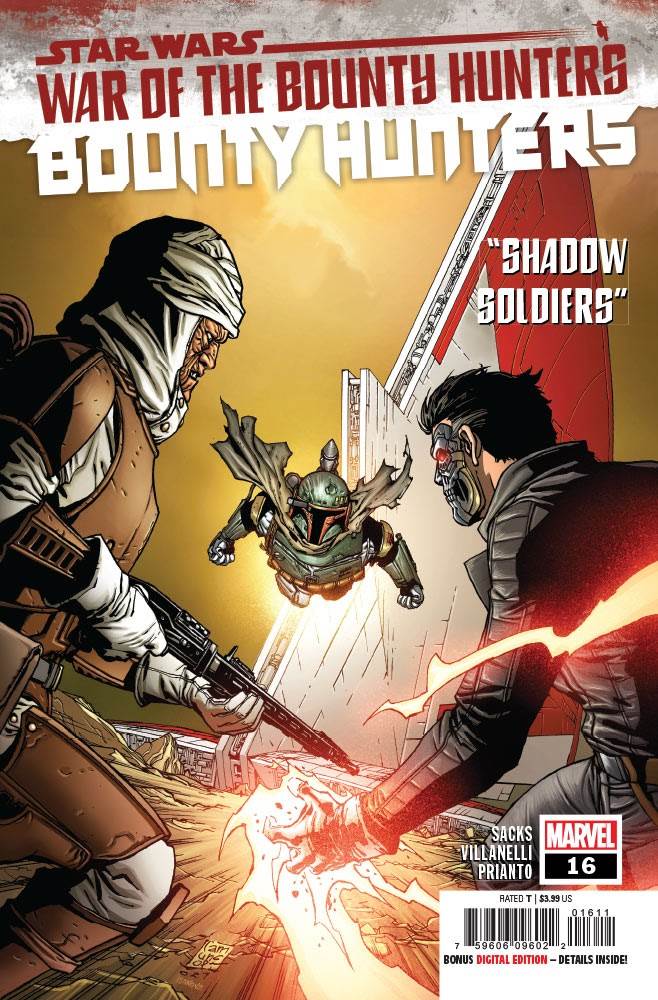 I’ve complained a lot lately about the many tie-in issues to Marvel’s ambitious Star Wars: War of the Bounty Hunters crossover event overlapping a bit too much with the action in its main five-issue miniseries. Well at long last I’m pleased to report that writer Ethan Sacks has found a way to properly balance that repetitiveness with new material.

Star Wars: Bounty Hunters #16 only shares a few pages’ worth of story points with War of the Bounty Hunters #4, which came out a couple weeks ago, and though it rewinds time once again to before Beilert Valance and his current partner Dengar arrive on the planet Jekara, there’s still enough going on in this issue to keep things interesting for the reader. 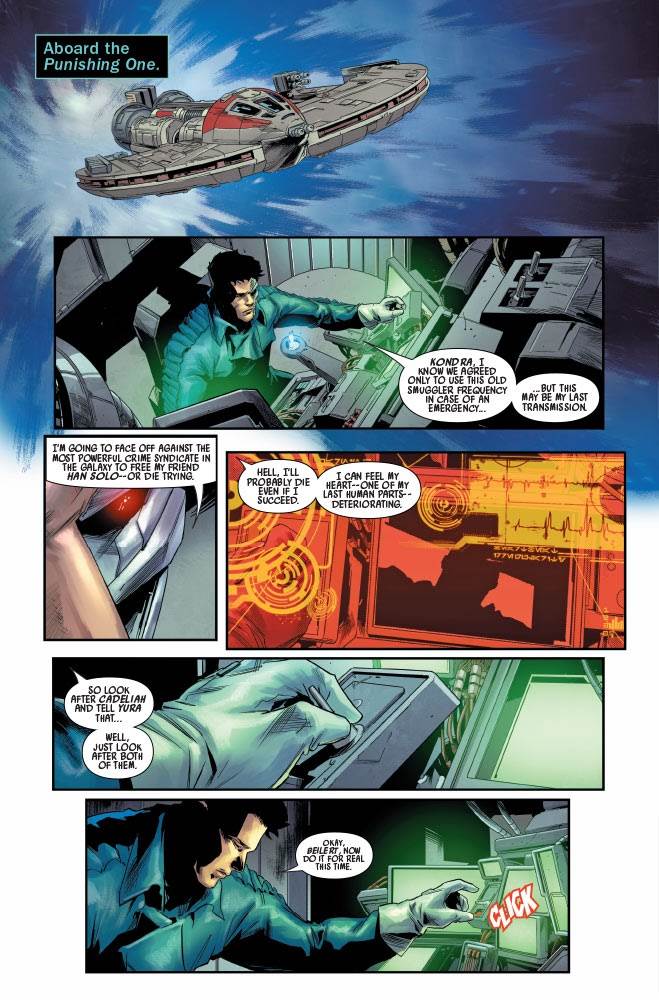 We pick up with Valance and Dengar in hyperspace aboard the Punishing One, and Valance making an attempt to reach out to his rebel friends who have adopted Cadeliah– the star-crossed heir to both the Mourner’s Wail and Unbroken Clan crime syndicates. Then upon arriving at Jekara, they find that they are far from the only interested party in the quest for the carbonite-frozen Han Solo. And while Valance simply wants to rescue his old war buddy Han, Dengar seeks to claim the bounty on Boba Fett in an effort to save the love of his life from Jabba the Hutt. We also spend some time with fellow hunters T’onga and Losha, who have taken Zuckuss aboard their ship so he can help them track down Valance, who might be able to lead them to Cadeliah. It’s a complicated web of interpersonal character relationships, but that’s what’s starting to make the Bounty Hunters comic worth keeping up with after a period of frustrating wheel-spinning. 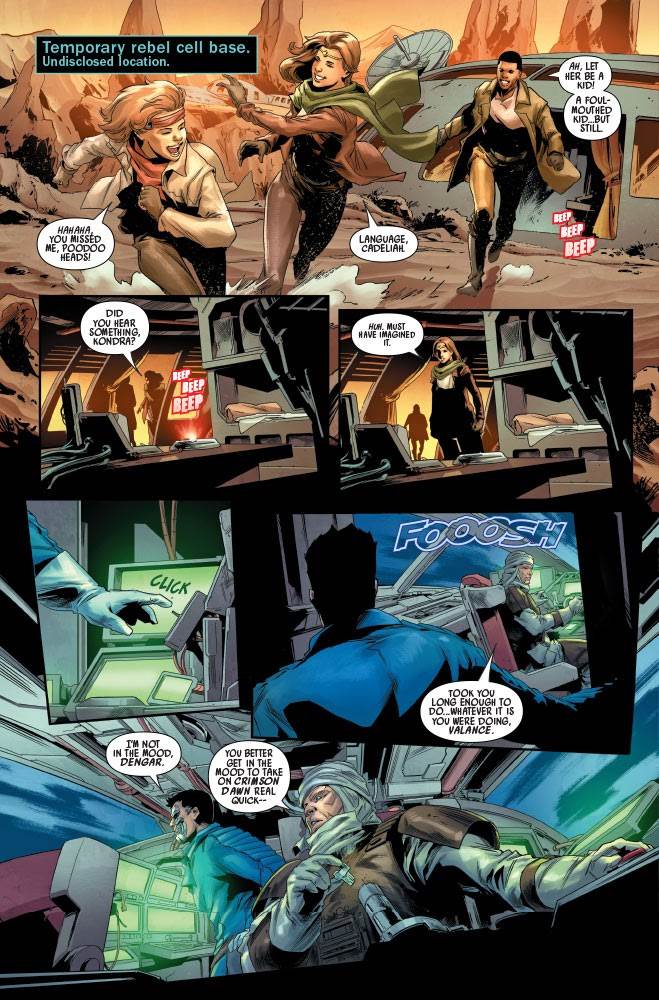 I got a kick out of Zuckuss’s use of bones to find Valance’s trail, and as a big Bossk fan, I’m really glad this issue checked in with him as well. I loved seeing my favorite Trandoshan take T’onga and Losha by surprise on the frozen planet, but of course, once Dengar and Valance take out some guards and finally spot Boba Fett, we get a rerun of the three-way fight we saw in the miniseries– albeit via some different perspectives than before. Regardless, I’m loving the somber atmosphere and desolate tone set by artist Paolo Villanelli (whose work is steadily growing on me) and colorist Arif Prianto, and there’s an instantly memorable multi-tentacled underwater creature called the Zugorak introduced here that makes the Dianoga look like a tame Lothcat. My only complaint is the last-minute cameo appearance by the assassin known as Deathstick, who seems to have the ability to be everywhere at once in this crossover event. Now she’s teaming up with Dengar, but will that make her more interesting in the long run? We’ll have to pick up future tie-in issues of War of the Bounty Hunters to find out. 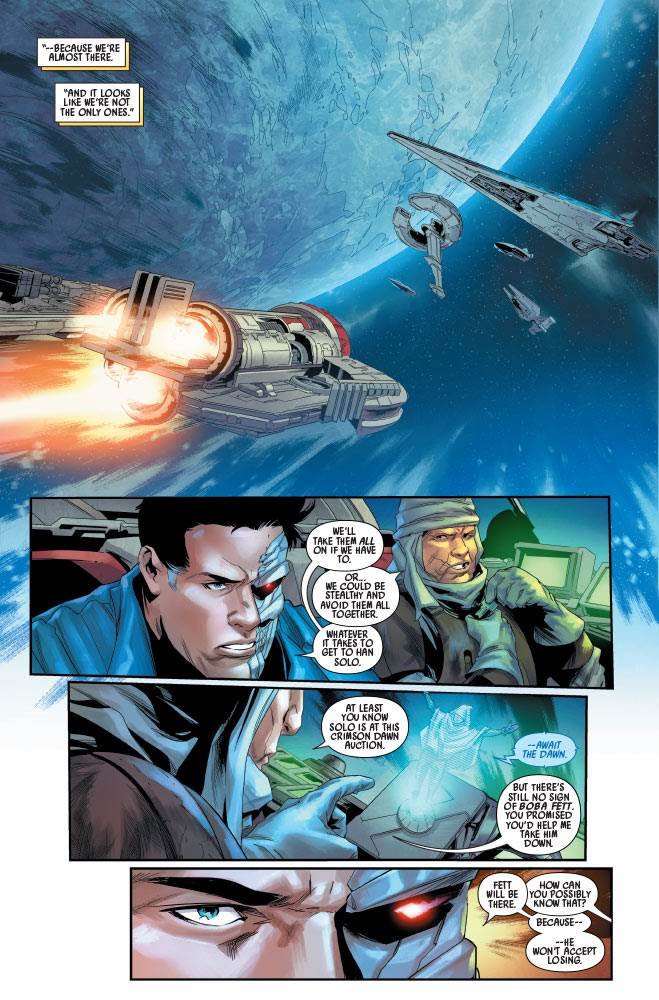